“We believe that our most gracious God, in his admirable wisdom and goodness, seeing that man had thus thrown himself into temporal and eternal death, and made himself wholly miserable, was pleased to seek and comfort him, when he trembling fled from his presence, promising him that he would give his Son, who should be made of a woman, to bruise the head of the serpent, and would make him happy.”

As such Article XVII is rather strikingly different from those which we have previously discussed. Each of the preceding, and for that matter, succeeding, articles contain a concise and definite statement of a doctrine of the Scriptures. But Article XVII contains no such doctrinal statement. There are some powerful doctrinal implications for the article speaks of God and of His grace, wisdom, goodness, good pleasure, and promise. It also speaks of God’s seeking and comforting fallen man and of Christ who is made of a woman and bruises the head of the serpent. And, it speaks of man’s temporal and eternal death which constitutes his “wholly miserable” condition. But there is no specific statement of doctrine here. What we do find might be called an obvious pastoral emphasis and concern. Article XVII speaks of our most gracious God Who seeks and comforts dead, miserable, fallen man. It speaks of the promise of God to miserable man, a promise which is contained in Genesis 3:15. Thus in a beautiful way this article of our Confession serves to introduce the doctrine of Christ.

In general, what we confess in this article is that God saw that man had thrown himself into temporal and eternal death and had thus made himself “wholly miserable.” When man trembling fled from God’s presence, God was pleased to seek and comfort him. This seeking and comfort was a revelation of God’s grace, admirable wisdom, and goodness. It was grace because it was wholly unmerited on the part of man who had fallen into sin and death. It was wisdom because this was the way God intended from all eternity to reveal His Son, our Lord Jesus Christ. And, it was sheer goodness on God’s part for He was not: obligated to seek and comfort man in his misery. This comfort consisted in the promise of God’s Son who would be “made of a woman, bruise the head of the serpent, and make man happy.” All this we believe with our hearts and confess with our mouths.

It is well that we concentrate on this promise as it occurs in the context of Genesis 3. Upon their eating of the forbidden fruit of the tree of the knowledge of good and evil, Scripture tells us, the eyes of the man and woman were opened and they vainly attempted to cover their shame and nakedness with fig leaves. (verses 1-7) When fallen man heard the voice of the Lord God, he and his wife “hid themselves from the presence of the Lord God amongst the trees of the garden.” (vs. 8) Indeed it is true as our creed expresses it: “man trembling fled from God’s presence.” The Lord seeks and comforts fallen man by calling Adam from his hiding place and insisting that Adam, himself, explain what he had done. Adam blames the woman whom God had given him for his predicament. The woman in turn blames the serpent who beguiled her. (vss. 9-13) This already indicates how deeply man had fallen. Really by their answers they attempt to cast the blame for their sin upon God Himself Who had given the woman to the man and Who had created the subtle serpent. How true it is that man by his fall had rendered himself, “wholly miserable.” After pronouncing the curse upon the serpent as the instrument of the devil God speaks the Word of the promise: “And I will put enmity between thee and the woman, and between thy seed and her seed; it shall bruise thy head, and thou shalt bruise his heel.” (vs. 15)

Concerning this promise we may note in general that it was spoken to the serpent, although in the hearing of our first parents. And Adam and Eve, who could not know the meaning of this promise in all its riches as we do, nevertheless undoubtedly understood its essentials. Note too that this promise really contains all the truth of the Word of God in seed form. The whole of Scripture is actually summed in these powerful words. All subsequent revelation of God up to and including the coming of Christ is only a further development and revelation of this promise. For this reason our Dutch forebears were fond of callingGenesis 3:15 the “moeder belofte,” the mother promise. These words constitute THE promise out of which the whole of Scripture is born.

According to this promise God puts enmity, sharp hatred between two seeds: that of the woman and that of the serpent. That seed of the woman is one seed, not many seeds. According to the revelation of the promise in Scripture that seed may be traced throughout the ages. The seed of the woman is Abel and then Seth in his place. It is Enoch, the prophet, who testified of the Lord’s coming in judgment (Cf. Jude) and who walked with God and was not, for God took him to glory. The seed of the woman is realized in the seed of Abraham which is as the stars of heaven and the sand by the seashore innumerable. That seed is the twelve tribes of Israel and especially the tribe of Judah and more especially the house of David, the man after God’s heart. Still more, that seed is ultimately realized in the Son of David, our Lord Jesus Christ and all the elect who are in Him by faith. (Cf. Romans 9-11, Galatians 3) The seed of the serpent is the whole devil’s brood of reprobate who manifest themselves in all of history, but whose ultimate manifestation comes in the person of the Antichrist, the man of sin, the son of perdition.

Between these two seeds God puts enmity or hatred. While that enmity reaches its culmination at the cross of Jesus Christ, it is evident all through history in the great struggle between the church and the world, the children of God and the children of the devil. It is really enmity against God. And it is manifest in the constant hatred of the world over against the church. Repeatedly the world attempts the destruction of God’s church. Always the church as representative of God and His Christ on earth must wage spiritual warfare with the whole armor of God, not against flesh and blood but against spiritual wickedness. (Cf.Ephesians 6) The life of the child of God, and he must never forget it, is a life of fierce battle against the devil and his hosts. The child of God must never forget that God has put hatred between him and the children of the devil. His path, therefore, is never easy. It’s a bloody path on which the child of God must tread. Over against him and in bitter hatred stand the devil and his seed, the reprobate. These are the seed of the serpent exactly because their father is spiritually the devil; they bear his image and they do his bidding. (Cf. John 8:44, I John 3:8) This is reality and this explains all of history. This is what is going on right now in our world and in our times.

In the light of this reality the calling of the child of God is perfectly clear. He must love the Lord his God with all his heart and the neighbor as himself. He must maintain the truth over against the lie. Never may he compromise with the devil and his brood. He must “love not the world, neither the things that are in the world . . . .” (I John 2:15-17) Taking to himself the whole armor of God, he must tight the good fight of faith withstanding the wiles and fiery darts of the evil one. In all that battle he must expect to suffer for Jesus’ sake.

That too is the paradox and at the same time the glory of this struggle between the two seeds. The heel of the seed of the woman is bruised but this bruising itself constitutes the victory for the seed of the woman. That’s the cross! It constitutes the judgment of this world! At the very moment when the devil imagined he had succeeded in destroying the seed of the woman he himself was crushed forever. This means as well that when the devil and his host persecute the seed of the woman, when they hate and kill the elect, they are really defeated. They cannot harm the church and people of God. Through death, that last enemy, the saints are transported to glory in the presence of God. And, ultimately Christ returns to make all things new and cast His and our enemies into everlasting hell. Thus, while the struggle rages, the child of God need never fear, the victory is his! For Christ has gained the victory and the children of God are in Him by faith and faith is the victory that overcomes the world.

This is the admirable wisdom and goodness of our most gracious God Who sought and comforted “wholly miserable” man and made him happy through the promise of His Son. 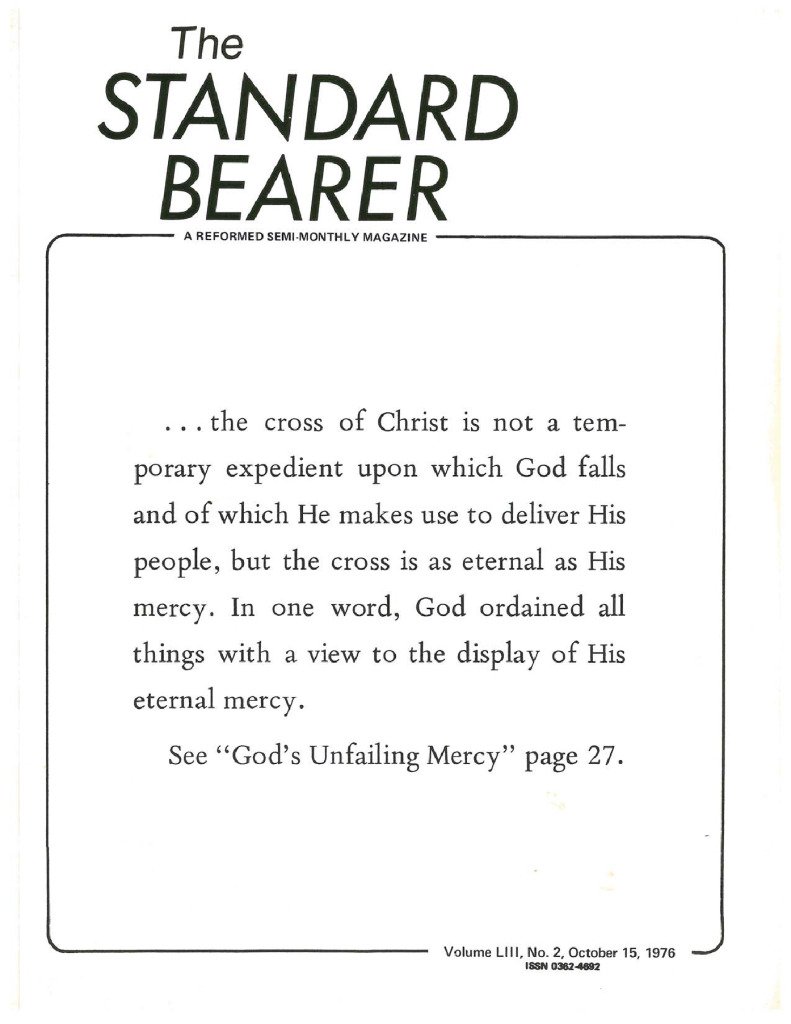