I had thought that we finished this discussion about the relation between the New Hermeneutics and preaching in my last letter to you. But you wrote me about some practical questions which rose in your mind as you pondered the things I had written; and to these questions I will turn in this letter. I hope this ties up some of the loose ends which you called to my attention; but if not, be sure to write again.

You made reference first of all to a remark I had made in a postscript in one of my earlier letters. In that postscript I mentioned the fact that it was very important, though perhaps difficult, to get people to see the issues involved in the approach to Scripture which is advocated by those who are admirers of the New Hermeneutics. I think I even went so far as to say that, you could not avoid these things in your preaching. But I let the matter hang there, and did not go more deeply into the matter. Now you ask me to be more specific about this and to point out concretely what must be done in order to accomplish this. I shall try to make some practical remarks about this whole matter. In the first place, quite obviously I think, it will not do to bring the involved arguments of Hermeneutics to the attention of your people—surely not in the preaching. I say this for several reasons.

In the first place, the issues which are raised by the proponents of the New Hermeneutics are certainly important ones, but the manner in which these issues are raised is so extremely technical that even a person who is trained in theology can scarcely make head or tail out of them. I have read a lot of this material and you have read a lot of it. You know that what I say is true. The solutions proposed to so-called problems which the defenders of the New Hermeneutics raise are so complicated and so involved and so filled with all kinds of technical language that I wonder some; times whether the authors themselves understand what they are saying. I freely admit that I am often at a loss to know what in the world these men mean to say. Let me just give you a random sample which I ran across the other day. “The idea that there are some parts of the New Testament picture concerning which historiography is unable to say whether they are true or false has led to the suggestion that they belong to history, but to history of a different kind from that wherein historiographical criteria are relevant: namely, to something called ‘super-history’ or ‘meta-history’, or even ‘non-historical history’ (unhistorische Geschichte) which, Barth says, every history is ‘in its immediacy to God . . ., i.e., it cannot be deduced and compared and therefore comprehended. But this does not mean that it ceases to be genuine history.'” (Finding The Historical Jesus, James Peter; Harper & Row, p. 73.)

The technical aspects of the issues involved are not proper material for the pulpit. Of that there is no question. Nor need the people of God be bothered with all this stuff.

But there are a couple of things which are worth noticing nonetheless. In the first place, the very complexity of these issues makes them suspicious with respect to their orthodoxy. We must always remember that the Word of God is clear, and the truth of the Word of God'(including the truth concerning the Scriptures) is clear. Everyone of God’s people can understand these things—even little children. If you have a theory concerning Scripture—whether it be concerning Scripture’s inspiration, infallibility, authority, or interpretation—which is so complex that most people cannot understand it, you may be very sure that it is not the truth. Its orthodoxy is suspect because of its very complexity. That’s one thing.

Another matter is that even the proponents of the New Hermeneutics admit this. I recall discussing this very matter with a man some years ago. He was defending the New Hermeneutics; but he was doing this by pointing out various discrepancies which he found in the gospel narratives. Matthew said one thing about a certain event; Mark said something else. In the course of our discussion he mentioned one particular discrepancy (what it was is not important) and asked me how I explained this. I was not sure in what direction he was going with this discussion, and so I asked him how he explained it. He answered with an extremely long and involved theory which was based on an over-emphasis of the “human element” in the Gospel narratives. When he finished, I asked him whether he would bring all this on the pulpit if he were preaching on that passage. I pressed the matter a bit because he “had said that this theory was absolutely essential to an understanding of the text. His response was to the effect that of course he would never do any such thing. He could not bring all this on the pulpit, for the people would never understand what he was talking about. Yet this very matter was critical to an understanding of the text. So, the result is that you have two levels of meaning in Scripture: one level which is appropriate for the common people of God; another level which is for theologians. This is, of course, inevitable if one adopts the New Hermeneutics: But we must abhor that idea and, fight against it with every ounce of our energy. That is tantamount to denying the perspicuity of Scripture. And if we deny the perspicuity of Scripture, we are back again in the Middle Ages. The people of God cannot understand the Word of God, but they have to go to the theologians in order to find out what Scripture really means. In answer to all this, I remind you of what Jesus said: “I thank thee, O Father, Lord of heaven and earth, because thou hast hid these things from the wise and prudent, and hast revealed them unto babes.” Matt. 11:25

But to return to the subject. While it is impossible to get the theories across to people, and while it is not necessary to do this either, you must get the issuesacross. The issues are, of course, fundamentally, whether the Bible is, in all its parts, the very Word of God, authoritative for us in all matters of faith and life. But this is the general issue. You must be, of course, more specific. For a denial of this truth comes in many different forms and heretics dress their heresies in many different coats. If, for example, the whole issue of women officebearers comes up, and you discover that thosewho defend the practice of having women in office do so even though they admit. that Paul expressly forbids this, then you know that they have a different view of Scripture than you have. You must find out what that view is. Then you will discover, as you already know, that, although they admit that Paul expressly forbids this, they also insist that Paul was, in that case, only writing forthe church of his time, but that his injunction is not in force for us. This, of course, involves a question of Scripture’s authority. And so you must face this question head on and you must not only show what is wrong with this view of Scripture, but you must also show what is the correct view, especially as it pertains to this particular question. And you must do this, not with vague and indefinite generalities, but with specific teachings concerning the Scriptures, and specific exegesis of the texts involved. (I might mention in passing that my colleague, Prof. Decker, is going to be writing on some of these matters in the Journal.) Whether you do this in a Catechism class, in a Society, in a lecture, or in a sermon, be specific and concrete, and demonstrate carefully the truth of Scripture on the matter.

But you must also show the serious consequences of taking the position which the New Hermeneutics takes. And this brings up another point which ought to be made. I refer to the fact that it is never really enough merely to say that the people of God actually possess the Word of God when they hold the Bible in their hands. They must be convinced of this. They must be very certain of this. They must firmly believe this. Never must you do anything which would in any respect create the least bit of doubt about this.

Your attitude towards that Word: of God is going to make all the difference in the world. I know, and you know, that should you deny all that we have said and should you yourself handle the Word of God carelessly, there will be people in your congregation who will rise up in holy wrath and defend the Scriptures—even against you. They will never permit you to tamper with their most precious and cherished possession. They will show that they are wiser than you and understand the Scriptures better than you do. But God forbid that that should ever become necessary.

You have a responsibility to cultivate in the minds and hearts of God’s people a proper attitude towards the Scriptures. You have this responsibility in Catechism, in society, on the pulpit, when you visit God’s people in their sufferings and sorrows—in short, when you preach the Word in season and out of season.

And the most important way to do this is to be an expositor of the Holy Scriptures. At the very center of all your work lies the work of careful, faithful, diligent, painstaking exegesis. There simply is no substitute for this.

And now I want to say something about this matter of exegesis. But it looks as if this will have to wait, for the page is filled. I guess it is not without some justification that people sometimes speak of my long-windedness. 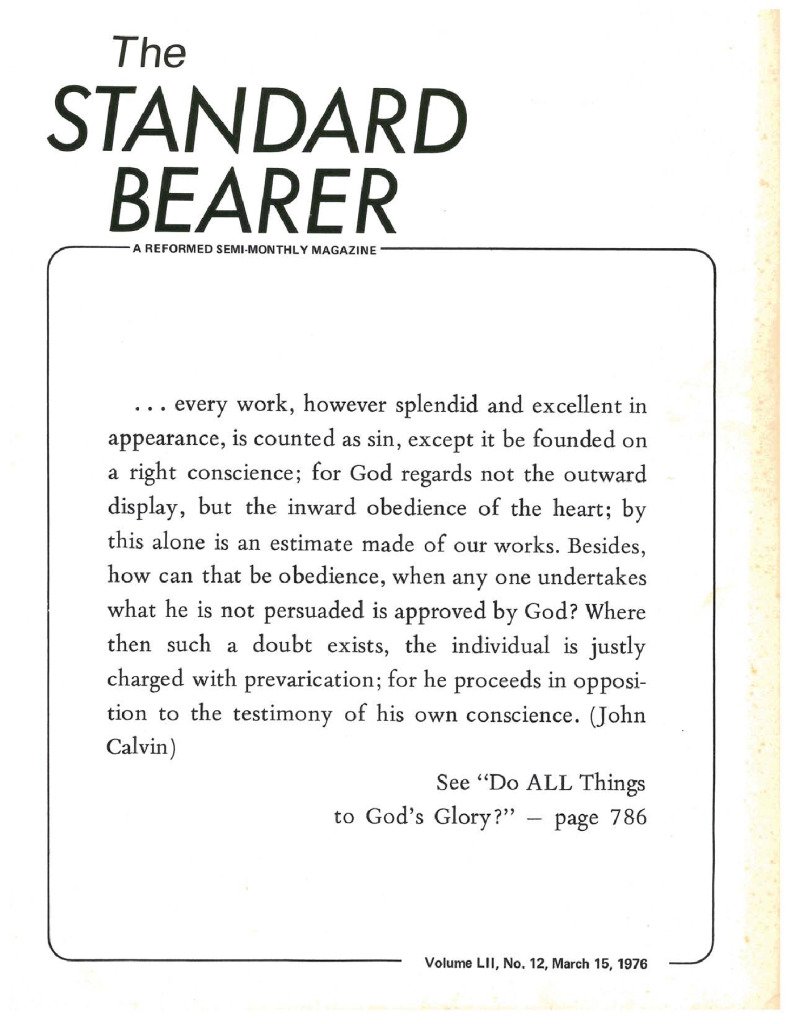