To be completely honest, we both were of the opinion—Rev. Hanko and I—that after our tour of New Zealand the rest of our tour would be somewhat anticlimactic. Part of the reason for this lay in the fact that our New Zealand tour had been so thrilling; part of it lay in the fact that the rest of our schedule was somewhat vague when we began our trip, due to some last-minute changes. However, we could not have been more mistaken! And needless to say, we are glad that we were mistaken.

We were very warmly and enthusiastically received in Tasmania. And though our Tasmania schedule was a bit uncertain before we arrived, due to the fact that Pastor Rodman was still recovering from the effects of a severe heart attack last year during his travels, our schedule turned out to be extremely busy. For a man who was supposed to be on a curtailed schedule, Pastor Rodman was an extremely busy man during the 3 1/2 days of our whirlwind tour of Tasmania! But he seemed to suffer no ill effects, and we all thoroughly enjoyed our fellowship together, both at the meetings and during our travels. The fact that we traveled together by car gave us much opportunity for discussion of theological and ecclesiastical matters—interspersed by Rev. Rodman’s, “Oh, that reminds me of a story that I must tell you from my Arminian days . . .” And with all our exchange of views—and I must say, we were deliberately probing one another and even searching for possible areas of disagreement—we discovered an altogether delightful like-mindedness. And we also had a hearty reception from the people of the Evangelical Presbyterian Church wherever we went. Further, we received the testimony that we were the first and the only ministers from another denomination whom they would allow in their pulpits. This, we believe, is a significant indication of the stand of these churches and of the degree of agreement between us. Along these lines Rev. Hanko and I reported to our Contact Committee and to our Consistories when we returned. And now our assessment has been confirmed by a development about which I will tell you at the end of this article—a most exciting and delightful development!

When I say that we had a whirlwind tour of Tasmania, I mean it. In 3 1/2 days time we participated in 7 meetings and in countless personal conversations, and we traveled an estimated 300-400 miles. Our tour began with our arrival in late afternoon at Wynyard, in the northwest comer of the island. We were met by a Mr. and Mrs. Klein and by Pastor Rodman, and our hosts were Mr. and Mrs. Albert Bosveld. As you can tell by the names, there are some of Dutch background in the EPC. We even met a Kuiper family in Launceston; that’s getting rather close to “Hoeksema”—because my mother was a Kuiper, which accounts for my middle name, “Cooper.” An interesting sidelight was the fact that the Bosvelds had a snapshot of a Rev. Hoeksema, taken by Mr. Bosveld’s deceased brother in the 1950s in Grand Rapids. It turned out to be a picture of my father, taken in the front yard of the First Church manse.

Our meeting on that first evening was held in the Methodist Church building in the neighboring town of Burnie. It was a gathering of some 30 people, who listened intently to my lecture on “God’s Sovereign Love of the World.” These people love and understand the Reformed truth of sovereign, particular grace; and this became evident, too, from their response to the lecture. After the lecture we enjoyed much conversation with the people of the congregation, and later we visited with the Bosvelds and Kleins until late at night.

Bright and early on Saturday, July 5, Mr. Bosveld drove us along the rugged north coast to Ulverstone, where we met Rev. and Mrs. Rodman, who brought us the rest of the way to Launceston, where Mr. Rodman’s home church is located. Rev. Hanko stayed in Launceston at the home of Mr. and Mrs. V. Connors; Mr. Connors is clerk of the Launceston session and also clerk of the presbytery (classis). Mrs. Hoeksema and I stayed with Mr. and Mrs. Lot Bosveld, members of the Reformed Church in Launceston.

There was little time to spare after our arrival. Saturday’s first meeting was in the Launceston church at 3:30 in the afternoon. Rev. Hanko spoke at length on the history and background of our churches and on the common grace question. And after his introduction, there was a lengthy question-and-answer session, during which several pertinent questions about the covenant and the place of the children of believers in the covenant were raised. This was a very interesting meeting and, I believe, very fruitful. We had “tea” (supper) cafeteria style in the church basement, and this gave us the opportunity to meet and converse with the Launceston people. Saturday’s second meeting was a lecture on “The Reformed Faith in Crisis.” In this lecture I was also asked to interject some remarks concerning the AACS, a movement which has also gained a foothold in Tasmania—or, at least a toehold. We found in our Australasian travels that there was considerable interest, but also considerable ignorance, with respect to the Toronto movement; and we were glad for the opportunity to enlighten people on some crucial matters and to sound a warning against this movement. Nevertheless, the general interest of the people is not in this subject. After the evening lecture we had our late evening refreshments (called “supper” in Australasia), and again had the opportunity to chat with the people. There were audiences of 50-60 at both these Saturday meetings.

Sunday morning both Rev. Hanko and I had preaching engagements. Rev. Hanko had the opportunity to preach at a mainline Presbyterian Church, St. Andrew’s; and he preached on Psalm 91:1, 2 to a rather elderly congregation of some 200 people. I was a guest in Pastor Rodman’s pulpit, and I preached to a congregation of some 80 people on. Isaiah 45:22-25.

After noon dinner with Mr. and Mrs. Connors and farewell to Launceston, we traveled along winding roads through the Tasmanian countryside to the little congregation at Winnaleah, arriving nicely in time for a meeting scheduled to begin at 4 o’clock. This was an informal gathering at the home of Mr. and Mrs. Peter Carins. I introduced the subject of sovereign, particular grace in connection with Ephesians 2:8-10. And our meeting extended right through “tea” to about 10 o’clock at night. If we were wondering whether the people of the EPC were as well-informed concerning the truth as their leaders, any doubts were dispelled at this meeting. Here, in this far away little country village of Tasmania, in this meeting of very ordinary people of God, we fielded questions about supra- and infra-lapsarianism and about Calvin on common grace as discussed in L. Berkhofs Systematic Theology! What a surprise! And what a pure delight to spend that evening with this group of some 40 people and their children. We went to bed that night with much to think about and much to be thankful for. Rev. Hanko stayed with the Carins, and Mrs. Hoeksema and I stayed overnight with Mr. and Mrs. Syd Crawford.

On Monday morning, after a quick picture-taking stint to prove that we saw genuine Australian kangaroos, we were on the road again for the all-day trip to the Tasman Peninsula and the village of Taranna. Our Business Manager and I had often talked about that “strange address” in Tasmania: “Tararma, Koonya, Tasman Peninsula,” where the Rev. John Lyons lives. Now we had the opportunity to meet this brother and his wife, and a joyful time of fellowship it was. There is nothing imposing about the Taranna Church—a small building and a struggling little flock. And the Taranna manse is located in the kind of back country, at the end of a dirt lane, such as you would not even imagine for a Protestant Reformed manse. But here we were! Amid Reformed people who genuinely welcomed us! At the far southern end of this far away island in the Pacific! Unbelievable! God works in a mysterious way, indeed! I wish you could have enjoyed Pastor Lyons’ conversation with us. And I wish you could have shared our fellowship at the evening meeting at the home of Kingstons, when Rev. Hanko introduced the discussion on the basis of Matthew 11:28. We were saddened, however, to learn that Pastor Lyons, because of poor health, was about to retire from full-time ministry. This again will intensify the sore need for ministers in the EPC.

Thus ended our stay in Tasmania. In the morning we had a quick sightseeing tour to the ruins of an old penal colony at Port Arthur. Then, on our hurried trip to the Hobart Airport, we enjoyed some of the beautiful scenery of Tasmania. And after barely making it to the airport on time (they were paging us when we arrived!), it was a hurried goodbye to Mr. Rodman, and back again to Meibourne. We regretted the fact that because of our abbreviated schedule and because of the fact that the bridge over Durwent at Hobart is out, we could not visit the Hobart congregation and Pastor Cameron-Smith.

And now for that surprise! In response to a letter of thanks from our Committee of Contact. and our inquiry as to ways in which we might be of assistance, we received the following letter from the Presbytery of the Evangelical Presbyterian Church, signed by Mr. V. Connors, Clerk:

“The Committee of International Church Relations of the Protestant Reformed Churches of America,

“We wish to thank you for your letter which was read at our last Presbytery meeting on the 25th October.

“When this letter was read and received the representatives from the various congregations of our Church including Rev. P. Burley from Rockhampton, Rev. I. Morgan, Melbourne, expressed their appreciation of the ministry that Professor Hoeksema and Rev. C. Hanko exercised among us.

“After due discussion on this letter, it was unanimously agreed that the Presbytery of our Church officially recognize the Protestant Reformed Churches of America as a true Church of Jesus Christ and therefore we desire to establish official correspondence with you. We recognize the communion of the Protestant Reformed Churches as a sister communion of the Evangelical Presbyterian Church of Australia.

“Appreciation was also expressed by the various representatives concerning the manner with which your representatives conducted themselves whilst they were among our Churches and we wish to inform you that their presence in our Church was a great encouragement. We were grateful to God for their visit.

“Yours in Sovereign Grace,

And that is a fitting note on which to end this report of our Tasmanian Tour. 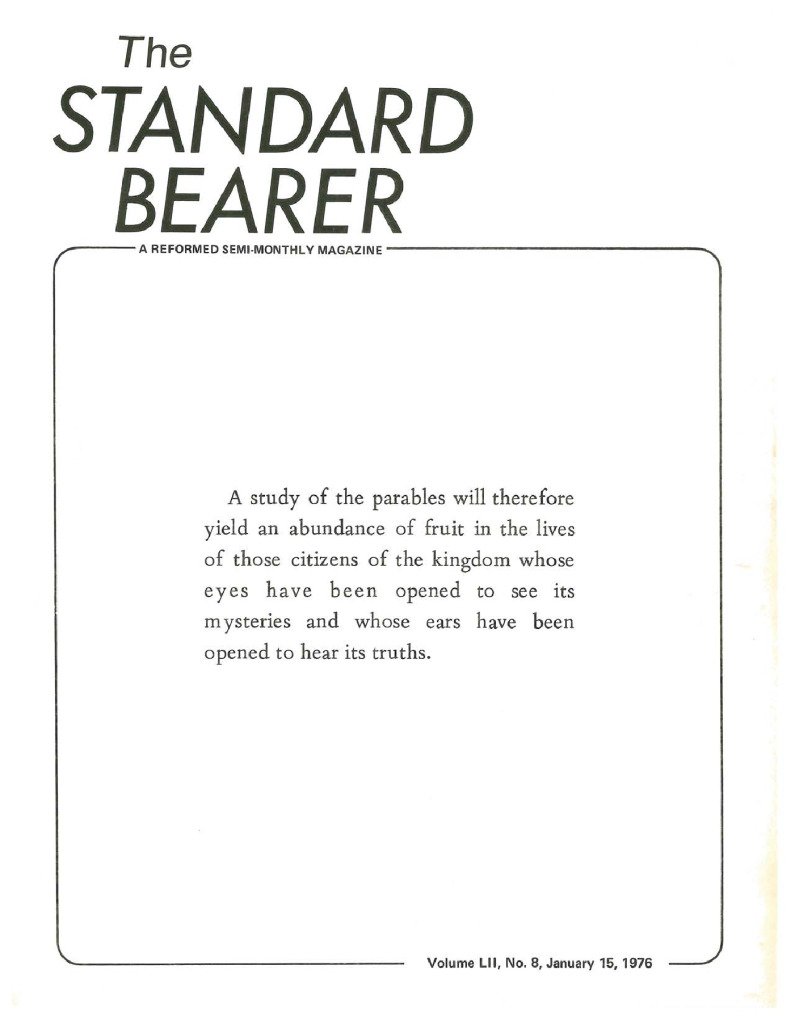