After confessing that the one true God is Maker of heaven and earth, the Nicene Creed adds the phrase “and of all things visible and invisible.”

This expression appears only, once in Scripture, inColossians 1:16. Here the apostle Paul writes, “For by Him (i.e. Christ) were all things created, that are in heaven, and that are in earth, visible and invisible, whether they be thrones, or dominions, or principalities, or powers: all things were created by Him, and for Him.”

In this and the surrounding verses the apostle Paul establishes the preeminence of Jesus Christ over all things, especially over the angel world. In Colossians 2:18 of this same epistle we find that Paul inveighs against angel worship: “Let no man beguile you of your reward in a voluntary humility and worshipping of angels.” It appears from this passage that there were those in the church of Colosse that were worshipping angels out of a false sense of humility. They evidently taught that man is too insignificant to approach God directly in prayer but needs the mediation of the angels in heaven. The only way to God is through the angels. Consequently, because the angels were willing to perform this service, or in order that they might be obliged to do so, they were to be worshipped. The apostle Paul here condemns such notions and practices. We certainly do not need to approach the living God through the angels. Nor must we worship them. This elevates the angels far above their God-given place and work in creation. And it detracts from the glory of Christ Who is the sole Mediator between God and man. It is undoubtedly with this error in mind that Paul in Colossians 1:16 proclaims Jesus Christ to be the Creator of all things. This includes those things that are, in heaven and that are on earth, visible and invisible. These two expressions complement each other. Those things on the earth are things visible; whereas those things in heaven are things invisible. It is especially the latter that concerns us. Those things in heaven which are invisible refer to the angelic world. The angelic world is further described here as thrones, dominions, principalities, and powers. These are the angels from the viewpoint of their various ranks and positions of authority. And the truth that Paul is asserting here is that they were all created by Christ. They were all created by Him and for Him. Certainly therefore we are not to worship the angels at the expense of Christ. Let Christ be exalted by us even above the angels.

This error of angel worship was never really purged from the church. The early church fathers in their writings refer to this same basic evil existing in the church long after the time of the apostles. Thus, for example, the church father Theodoret, commenting onColossians 2:18 which prohibits angel worship, states, “The disease which St. Paul denounces, continued for a long time in Phrygia and Pisidia.” Irenaeus in his workAgainst Heresies (A.D. 182-188) speaks against invoking the angels and directs the church to call on the name of the Lord Jesus Christ. In turn, Michael, the archangel, was worshipped widely in Asia Minor even as late as the middle of the 8th century.

To the worship of angels was later added the worship of various saints. The great saints of the past who perhaps suffered martyrdom for the faith were at first remembered and honored by the church. Gradually however they were worshiped along with the angels. This practice of worshiping saints continues even until today in the Roman Catholic Church. Mary and a host of other recognized saints are worshiped. By worshiping these saints and coming to God through them, Rome tells us that we can receive blessings which are not available through Jesus Christ. This is essentially the same error against which Paul struggled, only with a little different twist.

It is doubtful however that this evil practice of angel worship explains the expression that God is the Maker of all things visible and invisible. Were this in the mind of the church as she formulated the Nicene Creed, she probably would have attached this to the confession concerning Jesus Christ.

According to Calvin in his Institutes of the Christian Religion (I, xiv, 3) this phrase of the Nicene Creed was inserted especially to combat the error of Manichaeism. Manichaeism was an outgrowth of Gnosticism, which we have already discussed. Gnosticism had pretty well lost its influence around A.D. 250. It was revived however in a slightly different form in Manichaeism. The founder of Manichaeism was Mani (A.D. 215- 277), a Persian philosopher and astronomer, who claimed to be the highest prophet of God and identified himself with the Comforter (Paraclete) that Jesus had promised to send to the church upon His ascension. Mani taught the existence of two eternal kingdoms. There is the kingdom of light which is ethically and spiritually good. Over against this is the kingdom of darkness which is evil. Over the kingdom of darkness Satan and his hosts of devils rule sovereignly. To Satan, especially, Mani ascribed such attributes as eternity and self-existence. This virtually makes Satan divine and places him on equal footing with God Who rules over the kingdom of light. According to the teaching of Mani, Satan made an assault on the kingdom of light, This resulted in the emergence of our present world which is a mixture of light and darkness, of good and evil. Man, for example, was created in the image of Satan but has a strong spark of light. Following the lead of Gnosticism, Jesus Christ and the Holy Spirit are two aeons or spiritual beings who emanate from God. Through these two, God seeks to separate the light from the darkness of this world, to save that which is light and to destroy the darkness.

A complete development of Manichaean thought would reveal that it was a mixture of Persian Zoroastrianism and Buddhism with a gloss of Christianity. In as much as we have set forth the teachings of Manichaeism it is quite evident that this philosophy was completely dualistic. (God is the author of all that is good. Satan is the originator of all that is evil. Furthermore, sin and evil are not under God’s control. Nor is Satan under the rule of God. Satan and his works of darkness stand eternally independent of God. God and Satan are locked in a desperate struggle the victor in which will gain spiritual control and rule of the world.

Manichaeism became a real threat to the early Christian church, more so perhaps than Gnosticism. This was due in part to the highly organized character of this movement. The Manichaeans were organized into a church structure with apostles, bishops, presbyters, deacons, and itinerant evangelists. Regular worship services were held. Various feasts were held and sacraments acknowledged. This was all of course apart from the structure and worship of the Christian church.

It was to combat this false religion of Manichaeism that the early church added to her confession concerning God as the Maker of the heaven and earth that He is also Maker of all things visible and invisible. Undoubtedly the church selected this phrase of Paul inColossians 1:16 to emphasize that God is the Creator even of Satan and his hosts. Satan is not an eternal being that stands next to God or equal to God. He is a created being under God. He is part of God’s creation. He owes his existence to God. And so it is true of all the demonic beasts of Satan.

In close connection to this the early church also confessed in this first article of her creed that God the Father is the sovereign Ruler of all. This she confessed when she acknowledged that God the Father is almighty. In this first article, the church confessed, “I believe in God, the Father Almighty. . . .” We have seen earlier that the word “Almighty” is better translated “Almighty-One.” It is a word which expresses more than the bare idea of power or might. It is much richer than that. It expresses the idea of absolute and sovereign rule over all things. This is not only the root meaning of the word but also the force that this particular word has in the New Testament Scriptures. Repeatedly this word is connected in the Scriptures to God’s rule. This is true for example inRevelation 11:17: “We give thanks, O Lord God Almighty, which art, and wast, and art to come; because Thou hast taken to Thee Thy great power, and hast reigned.”

This sovereign rule of God over all things follows from the truth of creation. If God is the Maker of the heavens and the earth, of all things visible and invisible, it only follows that He also rules over it all. All things depend on Him and are controlled by Him. This is true even of Satan and his hosts. If Satan is a creature of God, then he stands not sovereignly next to God or independent of God but under God and His rule.

This rule of God over all things is very clearly taught in the Scriptures. God, we are told, works all things after the counsel of His will (Eph. 1:11). This rule of God extends certainly to the brute creation. It is God that “covereth the heavens with clouds, that prepareth rain for the earth; Who maketh grass to grow upon the mountains. He giveth to the beast his food, and to the young ravens which cry” (Ps. 147:8ff). God’s rule also extends to His rational moral creatures: men and angels. Is not the king’s heart in the hand of the Lord? As the rivers of water He turns it whithersoever He will (Prov. 21:1). Nor do the Devil and his hosts stand outside of God’s rule. Before Satan could lay so much as one finger on God’s servant Job, he needed the permission of God. God’s rule even extends over the sin of man. Is it not true that when Herod and Pilate, along with the Gentiles and the people of Israel, assembled together to kill the holy child Jesus, they were only doing that which God’s hand and counsel determined before to be done? (Acts 4:27, 28). The Bible knows of no dualism. There is but one God Who rules over all absolutely and sovereignly. This is what the early church confessed when in this first article of the Nicene Creed she acknowledged that as the Maker of heaven and earth, God the Father is also the Almighty One.

And we too must still confess the same truth today. For the sovereign rule of God is also denied today. We need not look for such a denial among the various religious sects that have arisen of late. Nor need we look to the false religions of the pagans. This denial of God’s sovereign rule is prevalent in the Christian church. It is inherent in the Arminianism that has virtually taken over the church. The Arminian has no sovereign God Who rules over all. He certainly does not rule over the heart of man. He can not make so much as one soul believe. Satan fights Him for the soul of every man. And, more often than not, God loses! Sin and evil are not something God uses for the attainment of His purpose and good pleasure. Sin is a reality that God must overcome lest it destroy His purpose. From this kind of mentality also arises the idea that the present sufferings of this world are not of God but of the Devil. God does not send sickness, war, poverty, and the like. Neither does He control them. These are all of Satan.

This smacks of the dualism of Manichaeism. Over against all such errors we with the church of the past must confess our faith in one God, the Father Almighty, Maker of heaven and earth, of all things visible and invisible. 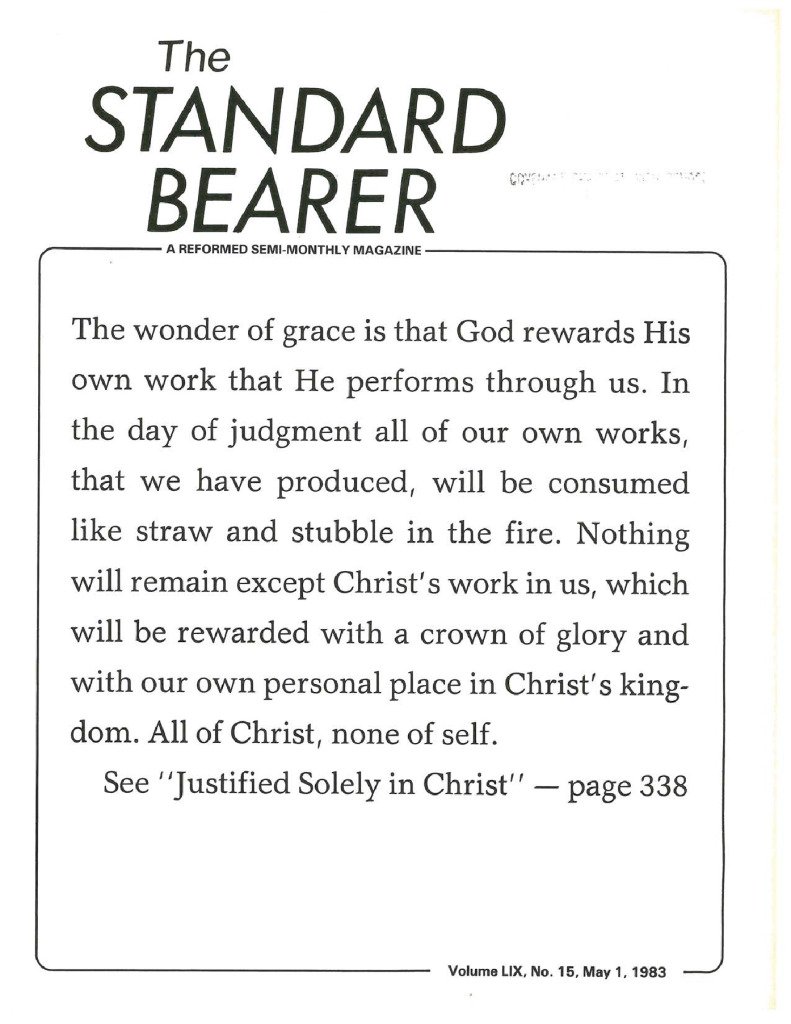