There is a general sentiment amongst the readers of the Standard Bearer, that they would like to hear something from the Home Missionary concerning his labors during the past four months in the field. At least if I have correctly interpreted a cross-section of such opinion expressed to me during the past few days here in Grand Rapids, Michigan.

Gladly do I relate a few of my experiences as a novice in the field of Missionary endeavors.

It was on January 24 that the undersigned first drove by car to the Oskaloosa-Pella community to begin the labors of visiting with some of the families of that community, especially in Pella, and also of paying a visit to the “Consistory” of the Pella Church. With the fond memories cherished in his heart of seven years of labors of love in that congregation he went forth. With all the love of his heart he went first of all to visit the individuals of the Consistory—only to find that their attitude had radically changed toward the undersigned. They had closed the bowels of their affection for him—and they have not opened their hearts toward him up till this day!

It will be a long remembered experience for me what I particularly experienced on the meeting with the “Consistory” on the evening of February, the first Wednesday of that month. When entering the place of meeting, instead of being treated as a brother, I was placed under a veritable inquisition. The Rev. Gritters had evidently prepared “questions,” had written these out in duplicate forms for all the members of the “Consistory,” and refused to give the undersigned a copy of these questions. Five men sat with their pencils ready to jot down the answers of the undersigned to the questions. What they actually wrote down I have never learned, even though at a later meeting I was promised a copy of these questions and with their “record” of my answers.

What struck me as being unbrotherly was not at all that they asked questions of me, but that they asked these questions from out of the heights in the tone of voice of a lawyer attempting to trap a man in cross-examination. It appeared very soon that the “invitation” I had received to meet with them was not at all to discuss matters, but was meant as a “summons.” Of course, I could not allow myself to be summoned. What I desired was simply a brotherly and factual discussion of the issues. I desired a heart-to-heart talk about the very grave injustice which Pella’s “Consistory” had perpetrated in the church of God. However, the same ruthless injustice that had driven them to declare Rev. C. Hanko, H. Hoeksema and others outside of the Denomination was driving them in this meeting also to the bitter end.

And, let me add, this was the attitude manifested also at a later meeting when Rev. Hanko was “summoned” to appear before the schismatic Consistory. The Rev. C. Hanko could not believe, in utter amazement, the attitude revealed on that gathering where the undersigned too was present.

The Scriptures do not vainly say: he that hateth his brother, walks in darkness and knoweth not whither he is going. That there is a difference as wide as the poles between “steadfastness” and “stubbornness” became evident on those meetings with the “Consistory.” May the Lord reward them according to their evil doing! For He judges with a righteous judgment.

But there is also a more pleasant side to be remembered of our labors in Pella.

How shall I forget the great power of God whereby I was strengthened in Pella to preach the Word even for as few as two people in the audience. How marvelously the Lord strengthened me in that task. With what joy I preached the Word even for so few I shall never forget. The Lord caused us to taste richly that where two or three are gathered in o Christ’s Name—there He is in their midst!

Before the undersigned left Pella, Iowa, arrangements were made with radio station IQOE, Oskaloosa, Iowa, to have our Reformed Witness Hour Program on the air there on Sunday morning from 7 till 7:30 o’clock. May this ministry be instrumental that many hear the clear and distinctive witness of the Reformed faith.

It was during these days of labor at Pella, Iowa, that a voice came to the undersigned from out of Loveland, Colorado: “Come over, and help us.”

Of this we will have something to report in the next issue of the Standard Bearer, D.V. 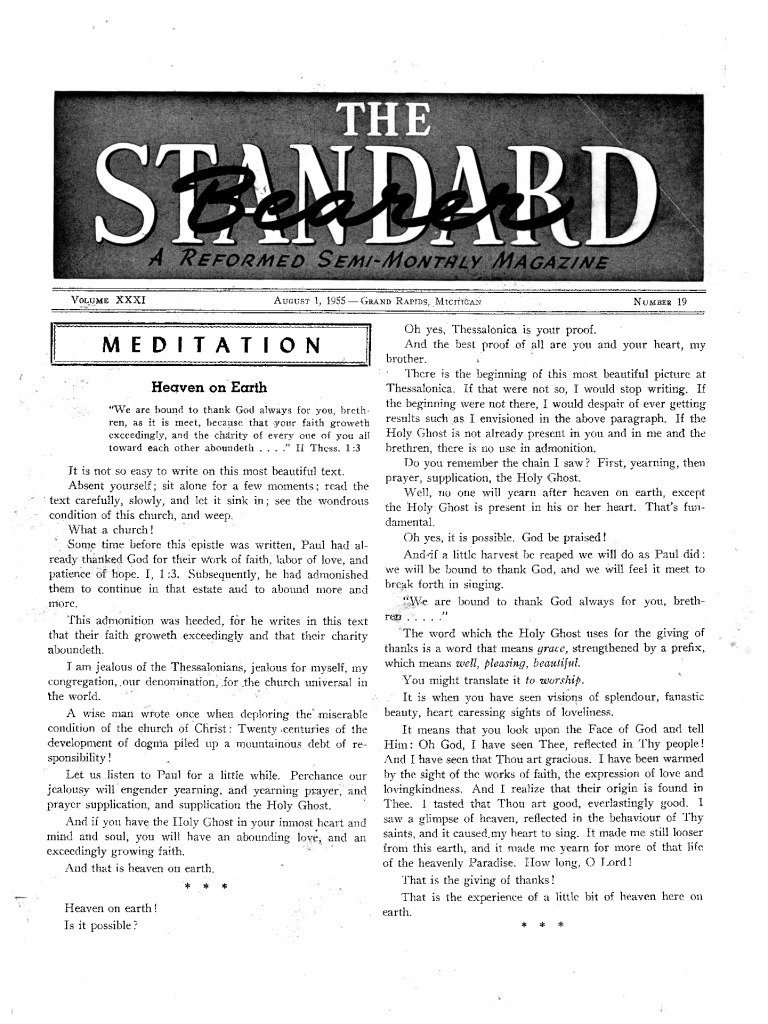