We continue with our examination of an article 1 which appeared about six years ago in The Chimes, published by students of Calvin College. The article put down the doctrines of predestination, election and reprobation as “harmful.” To go on, the article avers, “There is no such thing as heresy.” Then it is added, “There are only Christians and non-Christians.” Are not non-Christians, who either consciously or unconsciously reject the Christian faith, to the extent’ that they do reject it, involved in heresy? Deny there is such a thing as heresy, and you may as well deny there is such a thing as darkness. There is no black and white. Everything is gray. This is a denial of the antithesis, and so, really, a denial there is such a thing as truth. For heresy is always antithetically posed to the truth. The next step would be to deny that there is such a thing as Reformed Truth. But it is Reformed to call the false church heretical (Belgic Conf., Art. 29). It is Reformed to call Pelagianism a poisonous, proud heresy (Canons I.R.IV; II.R.III, IV: III-IV, 10; V.R.VII, IX: Belgic Conf. XV, XXXYI), Socinianism wicked (C.II.R.IV), Anabaptism a heresy (BC XVIII), and Epicureanism and, Manicheism error (ibid., XII, XIII). It is Reformed to put down as heretics the Jews, Mohammedans, Marcionites, Sabellians and Arians (ibid., IX). It is not only un-Reformed, it is anti-Reformed; in fact, it is devilish to paint the Reformed doctrine of predestination as an opiate of Satan, or as Stoicism, Manicheism, Libertinism and Turcism (Canons, Conclusion). But the contention, “There is no, such thing as heresy” is, on the part of “insolent sophists a pretext for violently assailing and vilifying the doctrine of the Reformed churches” (ibid.).

This they do in the remark, “When one sees how Christian Reformed people multiply the Ten Commandments into thousands, proscribing everything from a glass of whiskey to a Sabbath swim, one wonders what has become of the truth that was to have made us free.” Here lurks a latent hatred for the Ten Commandments which springs out of a secret longing to be free to sin undisciplined and uncondemned, a secret longing for the “new morality” (the old immorality in sophisticated disguise) and the “God-is-dead” fad. Vocation-doubters insult the Reformed churches which confess “the calling wherewith ye were called” and the “liberty wherewith Christ hath made us free.” The reality of “the truth shall make you free” is a freedom in the truth, not freedomfrom the truth.

With deep chagrin this snippety editorial hopes an infinite chasm will be added to the already vast gap between yesterday’s Christian and today’s. There must be not only no living in the past, but neither any livingfrom the past. Here is a “gap theory” toto coelodifferent from the bizarre “gap theory” of Dispensationalism. For Modernism reveals its underlying severance from the true church. The false church hates anything that smacks of “orthodoxy,” as ifthat were a sort of “spiritual virginity” hardly worth protecting. The false church is the harlot church which wants to be free to commit physical and spiritual fornication with the daughters of men and the sons of Belial. That church which has turned “Modernist” is certainly a false church. Isn’t there a real, dangerous trend that many of the Reformed churches are going in that direction? and isn’t it a fact that some of them have “arrived”?

Let us consider another line of resistance to this truth. God is the only one with a sovereignly free will. Has He not the right to exert it as He pleases, to do what He will with His own, to predetermine the destiny of all His creatures? But proud, self-assertive, would-be autonomous man objects to this. By nature a rebel, he pickets the Lord, carrying his little placard, “God is unfair!” This because God hath mercy on whom He will and whom He will He hardeneth. He reasons that God should create all men equal, and give everyone the same opportunities for life, liberty, and the pursuit of happiness, as well as for salvation. It is partiality to show mercy to one and severity to another. It is partiality to bring one man into the world into the midst of poverty, while another is born amidst riches. There should be equality. But the demand for equality originates not with equity, but with inferiority. It is the inferior mind which cannot escape thinking, “People have no right being different; it’s not democratic.” But it should be obvious that the creation did not come about democratically. Will anyone, for that reason, be so absurd to reject it? The universe is here to stay. Let the wise man be heard who said. “Nay, but, O man, who art thou that repliest against God? Shall the thing formed say to Him that formed it, ‘Why hast Thou made me thus?’ Hath not the Potter power over the clay, of the same lump, to make one vessel unto honor, and another unto dishonor?” (Rom. 9:20f).

The mystery of God’s sovereignty will be plainer to God’s people when they understand that “God is light” as well as “God is love.” He is a just God and a Savior, holy as well as gracious. Both of these aspects of the truth as seen in predestination. In the election of His people, God reveals the riches of His grace. In the reprobation of the rest, God proves His holiness and justice.

Who will maintain that God owes all men without exception eternal salvation? If He does, then He must also owe them all earthly prosperity. For argument from the greater to the lesser is conclusive. If God, to be perfectly just, must provide for the salvation of all men, so He is bound to make equal provision for man’s material welfare. But men have neither equal temporal or spiritual opportunities, no, not in this world where God is indisputable Sovereign. Does this, then, make Him unjust? The devil himself is not that much of a fool to suggest it, except to a cul de sac brain with “I’m-as-good-as-you-are” thinking. The providences of God are inscrutable and mysterious, unquestionably so. But these impenetrable mysteries reveal not the injustice of the Almighty, but the superficiality of finite understanding. The God of predestination and providence everywhere reveals His infinite attributes of eternity, immensity, incomprehensibility, immutability, wisdom, power, holiness, justice, goodness, truth and love. Boundless comfort it. is to know that all things happen, not by chance, but by the fatherly hand of Him in whom all such infinite glories inherently shine.

Objectors to divine election never fail to protest that it destroys man’s responsibility. If God foreordains whatsoever comes to pass, as the Westminster Confession puts it, if His decree fixes every event in history (Acts 2:22, 23; Acts 4:27f), and settles the destiny of every man, then all human responsibility is destroyed, and man becomes a stock (a log) and a (concrete) block. So the Arminian contention runs, also insisting that man’s will must be free to choose good or to choose evil, otherwise man’s moral agency is destroyed. That is why the greater masses of people, led on by their popular prophets, conclude that ultimately man, not God, decides eternal destiny. What is wrong with this objection is that it does not understand two things, responsibility and free will. It presumes that responsibility is limited by ability. Nothing could be more erroneous. Ability is not the measure of responsibility. Man’s responsibility was in no way lowered by his fall. The fall left him with very much less ability, than before, but with no less responsibility. In fact, since the fall, man has even more responsibility. Now he is responsible for his sins. But responsibility is one thing and free will is another. His responsibility is increased, since the fall; but his free will is not as free as it was before the fall. Now the will of fallen man is free only in the direction of sin. While there is a notable increase in his responsibility, there is, at the same time, a fatal decrease in his ability. Fallen man suffers total moral impotency, and so a total moral and spiritual inability. Yet he is still as fully responsible as sinless Adam was in the state of rectitude. The idea that his responsibility before God is only according to the ability he has as now a totally depraved sinner is a philosophical dream. The dream interpreted is that the more wholly incapable of any good a man is and becomes, the less responsible he is and becomes. No wonder, then, with this dream deeply ingrained in the mind- of man, that today the criminal is set free and the good man is punished. But the law of God dispels such a dream. Every man is answerable to it, in thought, word and act, and that personally, perpetually and perfectly.

The spiritual and moral inability of now fallen man does not cancel or annul his responsibility. Actually, the more incapable he becomes of doing any good, the guiltier he becomes, and, with the increase of his guilt, the increase of his responsibility, We are informed of sinners “that cannot cease from sin,” the reason being that they are sinners “having eyes full of adultery” (II Pet. 2:14). It is bad that they are not able to quit sin. It is worse that they cannot because (the eyes of) their minds are full of sin. Their inability cannot excuse them, since it only makes their sin worse, worse in the sense of greater and guiltier. Yet though they “cannot cease from sin,” their responsibility to do so remains, even increases, for all men are commanded to “cease to do evil,” to “learn to do well” (Isa. 1:16f), to “awake to righteousness and sin not” (I Cor. 15:34). Argument from impotency, inability and incapability cannot stand in the face of these commands. 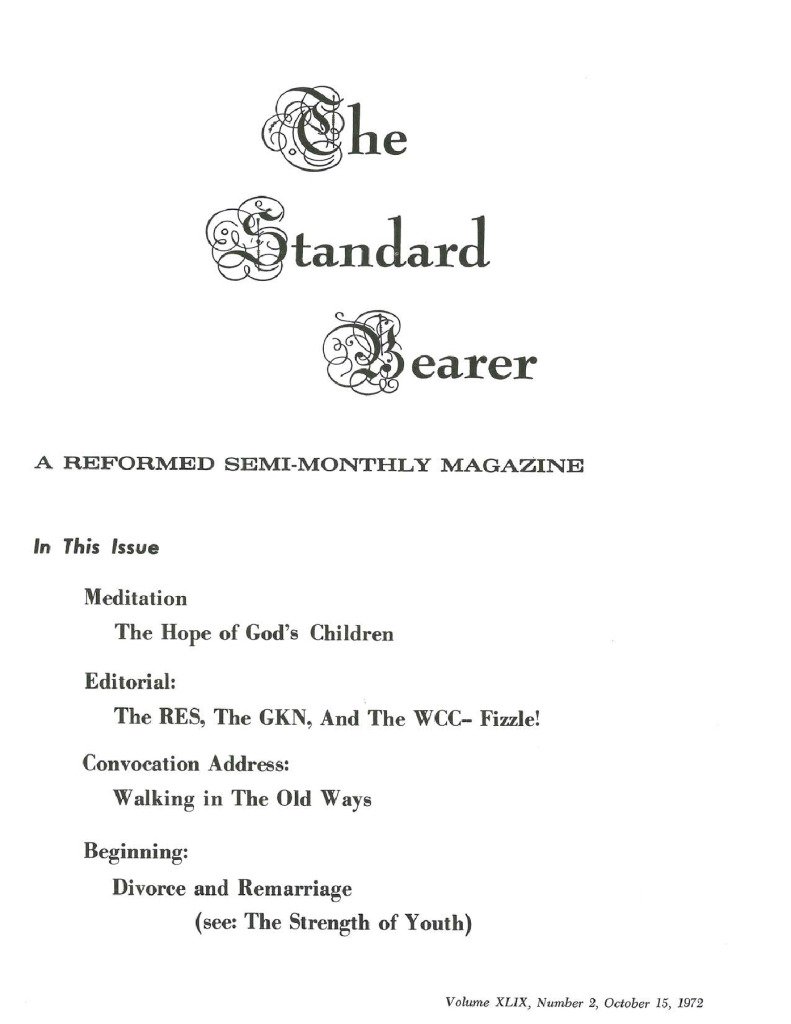