The Old Testament contains the word hypocrite thirteen times. It derives from a word which has the root meaning of moral filth; soiled with sin; impious; hypocrite. The New Testament has twenty-five occurrences of this word, over half of them in the discourses of Jesus. The root meaning is to speak or act under a false part; to act under an assumed character; a stage player; dissembler; pretender. A hypocrite is a man who lives the lie, for he is not what he seems to others to be; there is a significant difference between what he is at heart and what he appears to be overtly and publicly. Israel of Isaiah’s day lived a hypocritical national life with her external, religious exactitude, bringing just the right sacrifices at the right times, offering oblations and incense, keeping new moons, sabbaths, and assemblies. But though they drew near to God with their mouths and honored Him with their lips, they removed their heart far from Him and their fear of God was taught by the precepts of men (Isaiah 1, 29). The outstanding example of hypocrisy in the New Testament is the Pharisees, whom Jesus called whited sepulchers, appearing beautiful on the outside, but full of dead men’s bones and uncleanness within (Matt. 23:27). Examples of hypocrites today are ministers who holler at their congregations for their sins and shortcomings as if they themselves do not take part of the same things; or church members who, when setting out to restore a brother overtaken by a certain fault, act as if they would never commit such sins (Gal. 6:1).

Hypocrites live undiscovered in the church. They cannot be kept from the Lord’s Supper by the elders, for they do not declare themselves to be unbelieving and ungodly. They eat and drink judgment to themselves. The hypocrite God will judge (Lord’s Day 30). The moment a man shows himself to be what he really is, he ceases being a hypocrite. But God knows and Jesus knows.

God desires truth in the inward parts (Ps. 51:6). God commands those who live in the Spirit to walk in the Spirit (Gal. 5:15). He requires those who confess faith in Jesus Christ to manifest that faith with works of charity, otherwise their faith is not faith (James 2:14-20). As the God who has called us is holy, so must we be holy in all manner of conversation (I Pet. 1:15). Thus the saint is called to a life of spiritual consistency, to bewhat he is in Jesus Christ. Otherwise he is a half-baked cake (Hos. 7:8).

The biblical use of the word hypocrite reinforces our church’s stand against drama: the opera, the play, and the movie. Our stand is not against imitating that which is worthy; we are called to be imitators of God as dear children (Eph. 5:1), and to be followers together of Paul (Phil. 3:17). But our stand is against impersonation, the act of pretending that we are someone we are not, of speaking and acting under another person’s part. The common Greek word for actor, before and at the time of Jesus, was hypocrite. Classical Greek compared human life with the stage, and human conduct with the task of the actor. Almost always this was done in a negative, pejorative sense: the stage is a sham world and the actor is a deceiver. Jesus takes that Word and applies it to the duplicity of the Pharisees, pronouncing a sevenfold woe upon them. Let us take heed!

The question may be asked whether the regenerated child of God who sins daily, carrying within him the risen life of Christ, is a hypocrite? Is there not a difference between the inner life and the outer, the new man and the old? The answer is no! The child of God does not pretend not to be a sinner, but admits to it readily. He confesses his sin with godly sorrow every day. He strives to overcome the motions of sin that are in him and to be conformed to the image of Christ. No hypocrite he! 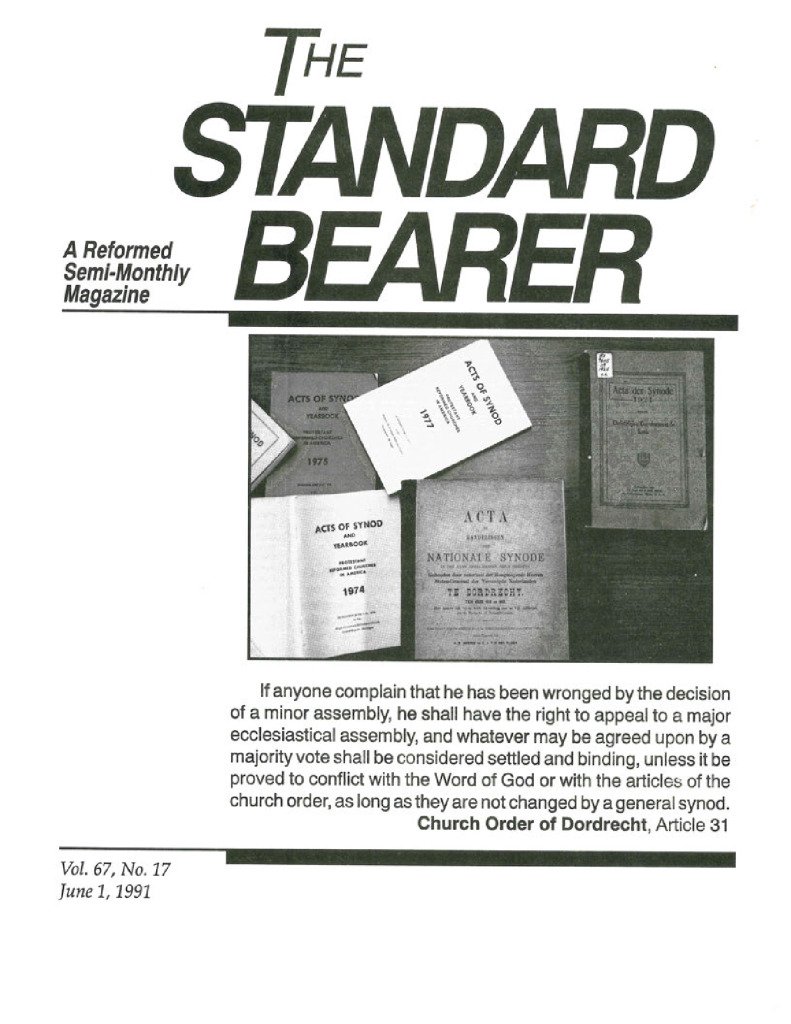