The Outlook, March 4, 1983, presents the address of Rev. A. Besteman given at the Holland-Zeeland Chapter of the Reformed Fellowship on the occasion of the 125th anniversary of the Christian Reformed Church. He comments about the remarkable growth and the manifold labors of that denomination:

That church which had its beginning in 1857 when four small congregations broke away from the Reformed Church in America now numbers 756 congregations. Thea Van Halsema in her book, “I WILL BUILD MY CHURCH” estimates that there were probably 250 adult members in the newly founded denomination. That number has grown to 180,000 professing members, who along with the baptized members bring the membership of the Christian Reformed Church to nearly 300,000.

The church which had its beginning here in the colony now has a mission outreach into 18 countries. The two mission efforts which we support in Nigeria, and with which we have been concerned for over 40 years have a total of 350,000 church attenders, a number larger than our own church membership.

The home mission outreach extends throughout the United States and Canada with 2,400 families worshipping in Home Mission Churches each Sunday.

The Christian Reformed World Relief Committee plans to disburse over six and a half million dollars in programs of material and physical relief during the next 12 months.

The Back to God Hour, the radio voice of the Christian Reformed Church is carried on some two hundred stations throughout our land. The message of the Back to God Hour also goes forth in Arabic, Spanish, Portuguese, French, Indonesian, Chinese, Japanese, and Russian languages.

We could also talk about the system of Christian education on elementary, high school and college levels founded and supported by the Christian Reformed people. And it would not be idle boasting to say that this system, in academic excellence, is second to none.

We may also refer to Christian agencies and institutions of mercy which have been established and which are generously supported by the people called Christian Reformed. . . .

Rev. Besteman continues by quoting the concerns of Elder Haan who was largely responsible for the break from the Reformed Church as stated by Dr. D.H. Kromminga in his book, THE CHRISTIAN REFORMED TRADITION:

“He had found many pastors and elders of the Reformed Church who made no secret of their membership in the lodge. He had seen a minister and an elder of the Reformed Church take part in a Methodist communion service. He had noticed that a collection of hymns was displacing the Psalms in public worship and that choir singing was silencing congregational singing. He had observed the displacement of catechetical instruction by the Sunday School and of indoctrination by instruction in Bible History and he clearly forecast the disastrous results…. Haan evidently had a remarkably correct picture of the leveling influence of American interdenominational fellowship.”

But Besteman continues by pointing out that the very things which Haan was concerned about in the Reformed Church 125 years ago, are things of concern in the Christian Reformed Church today. He points out that, despite the Synodical decision against lodge membership, there are churches who have lodge members at the communion table. He refers to ecumenical services between Christian Reformed and Roman Catholics as well as joint daily vacation Bible Schools. He shows how hymns have displaced Psalm singing. He reminds us of what is happening to catechism instruction.

There are more troubling incidents: the denial of the historicity of Genesis 3 by Dr. Verhey in 1976; the question of denial of the historicity of Adam and Eve by Prof. John Stek of Calvin Seminary; the charge by Mr. Liboldt, who was himself refused candidacy in the C.R.C. by the Synod, that Calvin Seminary professors “play games with the word ‘Historical’ ” when they publicly state that they believe in the “historical Adam.” He points too to the “women in office” issue—indicating that some churches are “commissioning” women as “adjunct elders” and churches continue to install women as deacons—all this, in spite of Synodical decisions which forbid this.

Besteman points to three things which can be done. First, there must be earnest prayer for the church and its spiritual welfare. Secondly, the elders must take more seriously their calling to supervise congregation and fellow office-bearers. Thirdly, the members of the C.R.C. should rejoice in the establishment of, and support, the Mid-America Reformed Seminary.

One can sympathize with the deep concern of Besteman and the Reformed Fellowship because of the present condition of the C.R.C. There is reason for concern! Still—the presentation leaves the distinct impression that the situation is now even more serious than it was in the Reformed Church 125 years ago—when separation became necessary. If separation was necessary then, what of today? If separation is not necessary today, why was it so 125 years ago? It seems to me that these must be some troubling questions in the minds of many in the C.R.C.

The Banner vs. The Presbyterian Journal on Guatemala

Several months ago, editor Andrew Kuyvenhoven wrote a scathing editorial addressed to Efrain Rios Montt, leader of Guatemala. The rebuke came because of the treatment accorded a C.R.C. missionary there, Rev. James Dekker. Among other things, Kuyvenhoven wrote:

“You are allowing army groups to massacre whole Indian villages. Your government’s effort to blame all violence on the guerrillas won’t work when murderers come in army vehicles and shoot from government helicopters. . . . Seek justice, correct oppression, defend the fatherless, plead for the widow. And if you do not wish to listen to this word, please do not mention the name of Jesus anymore.”

One would conclude that the editor was justified in his strong language. Though the church is not to be involved in political intrigue, and surely not in a foreign land, still-when a government abuses the church’s missionaries, strong language might be justified.

. . .Most infuriating of all, in the process of trying to “sort out” truth from fiction in Central America, are the conflicting reports from religious sources-representatives of the churches from whom we expect to get only the unvarnished truth. Surely churchmen—ministers and missionaries—can be counted on to provide testimonies that will reliably neutralize the barrage of lies from opposing sides in various conflicts. . . .

But it is not only committed Marxists who distort the facts to suit their own unworthy ends. Sometimes from right here in the U.S. well-meaning friends of liberty and justice inadvertently climb on the wrong bandwagon—to the detriment of what might be done for true liberty and justice. . .

This editor continues by telling how he spent some three months trying to sort out the truth in the whole account. He claims that from unimpeachable sources he received a far different story than the Banner editor gave. His “sources,” however, are unidentified. His claim is that missionary Dekker gave the appearance, at least, of working against the government there.

Mr. Dekker professes no commitment to Liberation Theology. But in Guatemala, one’s associations inevitably come under close scrutiny. One of these associates is now in exile in Costa Rica. He works for Alfalit, and got transferred to San Jose when it got too hot for him in Guatemala. . . .

If connections attributed to Mr. Dekker are not true, he did a poor job of avoiding the appearances for example, he was the last person to be seen with two Kekchi pastors who disappeared immediately after the Synod meeting. The liberals in the church accused the government of capturing them and that rumor was widely spread, but it soon became known that they had obtained blank checks from the Kekchi Presbytery, which they filled in for several thousand dollars from CRC relief funds and have not been heard from since. . . .

Sometime in the next few months, James Dekker made a trip to Europe without telling responsible church officials in Guatemala that he was leaving the country. Best estimate at the purpose of the trip is that it was a “courier job.” When knowledgeable people from Guatemala visited Europe hard on the heels of Mr. Dekker’s visit and went to some of the places he visited, they were bombarded with stories of the “terrible conditions in Guatemala.”

The editor presents much more. He points out too that statements as “overwhelming evidence of a ruthless counteroffensive against insurgency” and “murderers in army vehicles and helicopters” could be traced to one source only and that proof for such charges is utterly lacking. Fact is, the editor implies that not the government was responsible for many of the “murders,” but the insurgents. The editor states in a separate editorial: “Columnist George F. Will said it in words that ought to be chiseled into stone: ‘This is axiomatic: Clergy become vocal about headline-grabbing controversies of social policy when they lose confidence in their ability to speak convincingly about such untrendy subjects as sin and salvation.’ And again: ‘What Dean William Inge said cannot be said too often: Christianity is good news, not good advice.’

“The trouble with too many clergy—and too many churches—today is that from them we get neither good news nor good advice: We get doubtful news and bad advice.”

The account is troubling. Which editor is correct? Which judgment concerning Guatemala is right? And, to what extent may a church become involved in the politics and injustices of the nation in which mission work is done? At the very least, editor Kuyvenhoven has the heavy responsibility to repudiate with proof thePresbyterian Journal—or apologize for some very terrible charges made. In the meantime, we ought to remember ever the mandate of the church to preach Christ crucified—for the cross is alone the power and wisdom of God. 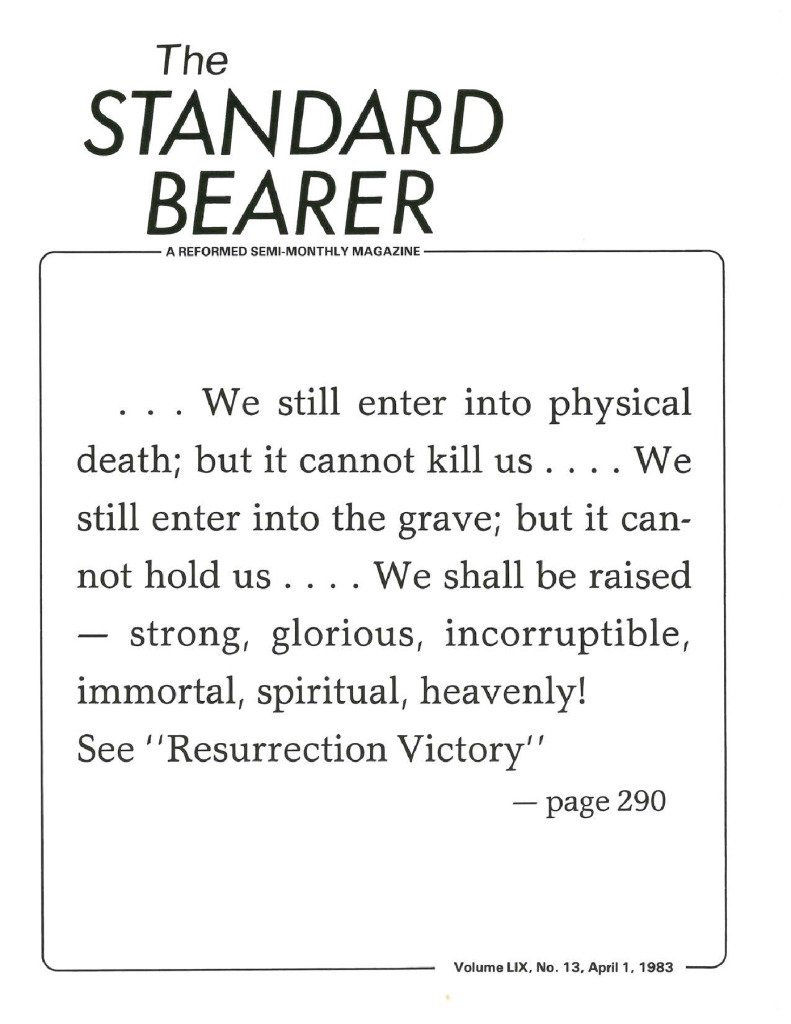