The Book of Revelation, Part Two, Chapter 22 and Chapter 23

The Book of Revelation, Part Two, Chapter 22 and Chapter 23

God the Alpha and Omega

5. And he that sat upon the throne said, Behold, I make all things new. And he said unto me, Write: for these words are true and faithful.

6. And he said unto me, It is done. I am Alpha and Omega, the beginning and the end. I will give unto him that is athirst of the fountain of the water of life freely.

7. He that overcometh shall inherit all things; and I will be his God, and he shall be my son.

8. But the fearful, and unbelieving, and the abominable, and murderers, and whoremongers, and sorcerers, and idolaters, and all liars, shall have their part in the lake which burneth with fire and brimstone: which is the second death.

First of all, we wish to make some general remarks. In these verses we have a solemn confirmation by God Himself of the things which John had seen in the vision of verses 1 to 4, the passing away of the old world and the formation of the new creation, and especially the, vision of the new Jerusalem. Throughout this passage, except, perhaps, in verse 5-b, the speaker is God Himself. And the contents are, in the first place, a statement that God makes all things new. In the second place, there is an injunction for John to write these words: for they are faithful and true. In the third place, there is a declaration that it is done, that it is come to pass, that it is all finished, and that God is the Alpha and Omega. In the fourth place, there is the promise that God will give the water of life to him that is athirst. And finally, there is a declaration that the wicked will be cast into eternal desolation. This we will now explain a little more in detail.

First of all, then, we have verse 5 and the first part of verse 6: “And he that sat [or, according to the Revised Version: ‘he that sitteth’] upon the throne said, Behold, I make all things new.” It is God Who is speaking here; and John hears these words although they are not directly addressed to him: He is the one that sits on the throne. Cf. Rev. 4:2, 3. And He therefore appears here as the sovereign Lord of all. In these word He here speaks and reveals Himself as the Savior, the Redeemer of His people, and the Redeemer and Renewer of all creation. All things He will make new in heaven and on earth. These words, we understand, look back upon the vision contained in verses 1 and 2, but emphasize the truth that God, the sovereign Lord, will cause all these things to come to pass. “And he said unto me [Revised Version: ‘And he saith’], Write: for these words are true and faithful:” These words are probably of the interpreting angel, since they contain an injunction for John to write. The words may mean either that John must write that these words are true and faithful, or that he must write down these words because they are true and faithful. In either case the meaning remains the same. The emphasis is on the fact that the words just spoken, namely, that God will make all things new, are true, that is, they are in harmony with reality. In spite of all appearances to the contrary here in this world, all things shall surely be made new. Faithful these words are, because they concern the promise of God. For the renewal of all creation is the ultimate realization of the promise of the gospel. They therefore concern God Himself. Hence, they are faithful, dependable. They shall never fail. God will surely fulfill His promise. And therefore John must immediately write down these words, or he must place special emphasis upon the fact that they are true and faithful. “And he said unto me, It is done [or: ‘they are come to pass’]. I am Alpha and Omega, the beginning and the end.” It is evident from the contents that these words are again spoken by God directly: for He alone is the Alpha and Omega. Cf. Rev. 1:8. The viewpoint is that bf the vision in verses 1 to 4. There John saw the new creation and the new Jerusalem. Here it is stated that they ark come to pass, or that the promise of God is completely realized. In the light of these words and from the viewpoint that all things are accomplished, the rest of the passage must be understood. It is now become fully evident that God is the Alpha and Omega, the beginning and the end of all things. All things are of Him, and all things are also unto Him. He must have the glory. He determines the end from the beginning. There is nothing that does not serve His purpose.

9. And there came unto me one of the seven angels which had the seven vials full of the seven last plagues, and talked with me, saying, Come hither, I will shew thee the bride, the Lamb’s wife.

10. And he carried me away in the spirit to a great and high mountain, arid shewed me that-great city, the holy Jerusalem, descending out of heaven from God,

11. Having the glory of God: and her light was like unto a stone most precious, even like a jasper stone, clear as crystal;

12. And had a wall great and high, and had twelve gates, and at the gates twelve angels, and names written thereon, which are the names of the twelve tribes of the children of Israel:

14. And the wall of the city had twelve foundations and in them the names of the twelve apostles of the Lamb.

15. And he that talked with me had a golden reed to measure the city, and the gates thereof, and the wall thereof.

16. And the city lieth foursquare, and the length is as large as the breadth: and he measured the city with the reed, twelve thousand furlongs. The length and the breadth and the height of it are equal.

17. And he measured the wall thereof, an hundred and forty and four cubits, according to the measure of a man, that is, of the angel.

18. And the building of the wall of it was of jasper: and the city was pure gold, like unto clear glass.

19. And the foundations of the wall of the city were garnished with all manner of precious stones. The first foundation was jasper; the second, sapphire; the third, a chalcedony; the fourth, an emerald;

20. The fifth, sardonyx; the sixth, sardius; the seventh, chrysolite; the eighth, beryl; the ninth, a topaz; the tenth, a chrysoprasus; the eleventh, a jacinth; the twelfth, an amethyst.

21. And the twelve gates were twelve pearls; every several gate was of one pearl: and the street of the city was pure gold, as it were transparent glass.

22. And I saw no temple therein: for the Lord God Almighty and the Lamb are the temple of it.

23. And the city had no need of the sun, neither of the moon, to shine in it: for the glory of God did lighten it, and the Lamb is the light thereof.

24. And the nations of them which are saved shall walk in the light of it: and the kings of the earth do bring their glory and honor into it.

25. And the gates of it shall not be shut at all by day: for there shall be no night there.

26. And they shall bring the glory and honor of the nations into it.

27. And there shall in no wise enter into it any thing that defileth, neither whatsoever worketh abomination, or maketh a lie: but they which are written in the Lamb’s book of life.

All things are to be new in the eternal future of the kingdom of heaven and in the perfect church. We expect a new heaven and a new earth, that is, a new and entirely different state of things. Essentially this new state of things shall consist in this, that God’s tabernacle is then with men. 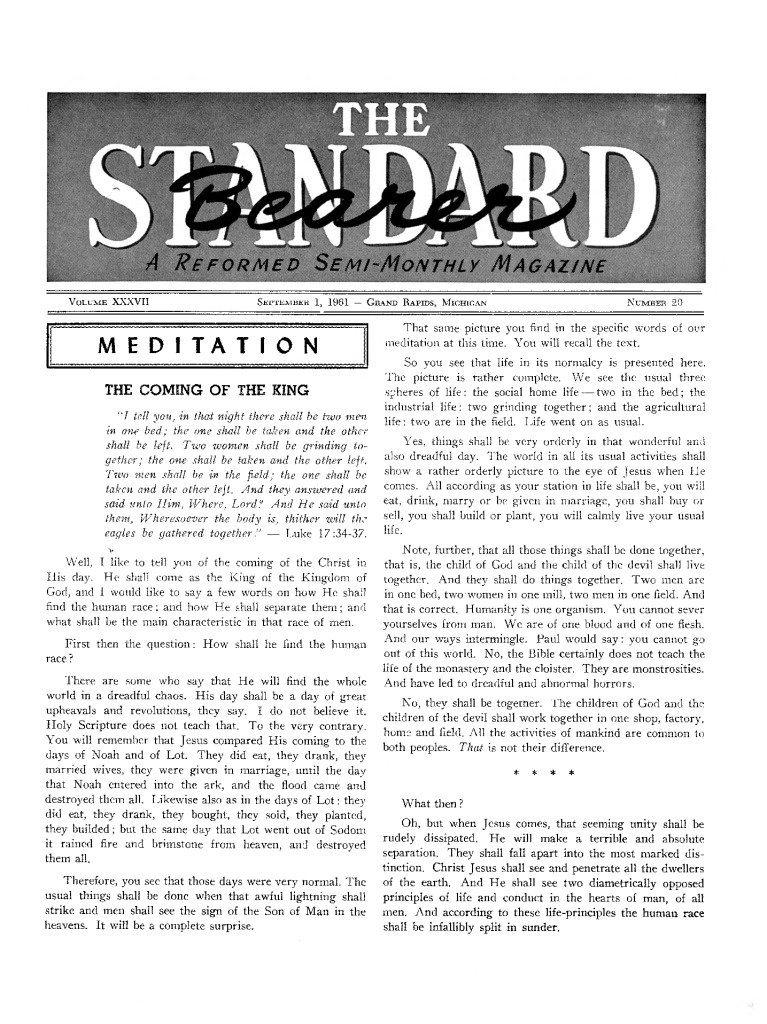