As promised in the June 1st issue of The Standard Bearer, we now hope to finish the quotation of the little pamphlet with the above title published some years ago by the Rev. M. Gritters and the Rev. A. Cammenga; in which they set forth the position of the Protestant. Reformed Churches re the Common Grace question. If there is space at the conclusion of this final quotation, we may have some comments to make. Here follows the continuation of the quotation of the pamphlet.

“15. It has often been rumored that the Protestant Reformed Churches preach only for God’s elect; is this true?

Answer: This is nothing but slander! Besides, does not Scripture command us to preach the gospel to every creature? (Mark 16:15). And to this command the Protestant Reformed Churches desire to remain faithful. Finally, who among men is able to separate the elect of God from those reprobated

“17. It is often reported that the Protestant Reformed Churches do not preach repentance since the elect will come to repentance anyway; is this true?

Answer: This is another untruth! With John the Baptist the Protestant Reformed Churches preach: ‘Repent, ye!’ However, this preaching of repentance is not presented as an offer of grace or a kind invitationdependent on the free will of man; but it is preached as a command and an injunction of God which can only be obeyed by the power and presence of God’s grace in the heart. And it is in the way of the preaching of the Gospel and through the power of God’s spirit that God’s chosen saints are brought to repentance. (Matt. 3:2; Mark 1:15; Acts 3:19; John 6:44; Acts 13:48; Acts 16:14.)

“18. Does the doctrine of the Protestant Reformed Churches deny the responsibility of man?

Answer: God forbid that the responsibility of man be denied! However, throughout the history of the church it has always been said that the doctrine of sovereign predestination denies man’s responsibility, but they that make such statements only prove that they are enemies of the Reformed truth, even as evil men spoke maliciously of the doctrine of grace when they concluded: ‘Let us sin that grace may abound’ (Rom. 6:1). Man as a moral, rational creature remains responsible for all his acts, his conscience bearing him witness and accusing him (Ram. 2:15).”

“19: Do the Protestant Reformed Churches subscribe to the doctrine of Pre-Millennialism?

Answer: They do not. This they believe to be contrary to Scripture and the Confessions. Scripture condemns the theory of Dispensationalism and it teaches the unity of the Old and New Testament Church.

“20. What statistical information can you give concerning the Protestant Reformed Churches?

Answer: The Protestant Reformed denomination is composed of twenty-two churches to date, numbering approximately 1200 families in all. These churches maintain their own Theological Seminary which gives these churches a well trained clergy. Besides the regular ministers of the Word a full time missionary is also maintained. Several publications serve the membership of these churches, among which are: The Standard Bearer, Concordia, Beacon Lights, the latter publication for the Young People’s Societies, and The Sunday School Guide.

“21. Why do the Protestant Reformed Churches perform missionary work in the neighborhoods of established churches rather than going out into the world of the unchurched?

Answer: It is a mistake to say that the Protestant Reformed Churches perform missionary work among the churches rather than among the unchurched. Missionary work among the churches and the unchurched are two different branches of mission work, and both must be performed. The apostles of Christ also received the injunction to perform both of these branches. For this reason they started at Jerusalem, the church, and proceeded toward Samaria and from thence went into all the world (Acts 1:8). The purpose of mission work among the churches is to proclaim the old and tried truth of the Word of God and of our Reformed Confessions to such church groups who lack this truth in whole or in part, or where this precious truth is waning slow but sure. And a church has no greater calling than that of seeking the welfare of any church or group of churches. If any given church neglects to seek the welfare of the instituted church in this world and there refuses to be his brother’s keeper what can be expected of this church when it approaches those who are heathen and unconverted? The strength of the church of Christ on earth is not first of all to build churches in heathendom but to strengthen the churches’ own walls first, and these church walls are found not only where are churches bearing the name of one’s own denomination, but they are found wherever there are believers in the Lord Jesus Christ, no matter what denomination he or she belongs to. To follow the example of the Psalmist and pray for the peace of Zion and seek her good’ (Ps. 122) does not mean to seek the good of one’s own little church or denomination, but it means that one seeks the spiritual good of all those that love the Lord.

“This the Protestant Reformed Churches are intent on doing whenever and wherever they send their men to preach the Word of God among the churched. Their purpose is not to destroy the church, but rather to seek her good. The love for the Reformed preaching of the gospel together with the conviction that only in that gospel lies the hope of the Church of Christ, brings the Protestant Reformed missionary to the neighborhoods and communities where churches are already found. These missionaries call men and women of every denomination to rally to the Standard of the Reformed truth of the Gospel of Christ, for without this truth of the gospel the church must and will fail. How can any church be safe when it denies man’s total depravity as well as the sovereignty of God? How can there be any comfort and assurance in life and death when salvation depends on man’s free will and is not based solely upon the eternal and sovereign counsel of God?

“The Protestant Reformed Churches believe and confess that the hope of the church and its only comfort is in the precious gospel proclaiming that God is all and man nothing. And because they believe, therefore do they speak everywhere!” Conclusion of the pamphlet.

The views concerning missions set forth in this pamphlet are still substantially the views of our Protestant Reformed Churches. In this we have not changed. But striking it is that of those who left us in the schism of 1953 four were missionaries in our churches. These men labored also among Christian Reformed people propagating these views. One of these men on more than one occasion was severely taken to task by leaders in the Christian Reformed Church because of the tactics he used in disseminating these views. Now all of these men and those who follow them repudiate these views. Now they seek to join hands with those whose doctrines they publicly criticized and condemned. Rev. H.J. Kuiper in Torch and Trumpet of July-August, 1959 correctly remarks they “broke away from the denomination by that name. (Protestant Reformed Churches—MS.) which since 1925 has been headed by Rev. H. Hoeksema.” They, therefore, are no longer Protestant Reformed and from every point of view have forfeited the right to the name. They are as Rev. Kuiper recognizes them, namely: Christian Reformed in heart and doctrine. But the churches which are still under the leadership of Rev. H. Hoeksema are Protestant Reformed in doctrine and practice.

It is also interesting to note that the statistics reported in the twentieth question and answer have changed somewhat due to the schism. As far as numbers are concerned, we have been considerably decimated. Though we have at present nineteen churches, the number of families is a little more than half the figure quoted in the pamphlet. But the reader should note that those who left us cannot boast of a Theological Seminary “which gives their churches a well trained clergy.” This seminary we still have which is the very heart of our churches. Those who left us cannot boast of a full time missionary. This we have. Since the schism one flourishing congregation has been added to our churches through his efforts, and there are prospects of two more being added in the near future. Those who left us cannot boast of the several publications which serve the membership of our churches. As far as they are concerned none of the publications mentioned exist any longer. EvenConcordia has gone out of existence, and was replaced by The Reformed Guardian.

And we might add to the above that they have also lost the radio program known as the Reformed Witness Hour in which most of their ministers participated at one time or another. They lost also the Protestant Reformed Schools which they also helped to organize and establish in which our covenant children are trained according to the doctrine believed and professed in our churches. Fact is, they have nothing left. They realize that they cannot continue to exist as a separate denomination and because the doctrine they now embrace is essentially Christian Reformed they are making every effort to return to that denomination.

We pity them, and most of all the people who have been misguided by their leaders. Many of them are people who since 1924 have taken with us a strong stand against the error of common grace adopted by the Christian Reformed Church. Would to God that they would see the error of their way in which they now travel, and repent and return to us and the doctrinal position they once embraced with us as stipulated in the pamphlet under discussion.

Only in the way of repentance and return is there any hope for them and their children as far as the Reformed truth is concerned. If they truly and sincerely love the Protestant Reformed doctrine, it should not be difficult for them to return to us. We would advise them to go to the local consistories from which they separated themselves and confess that they erred when they became guilty of schism when they followed their leaders in the split of 1953. They should confess that they embraced the false doctrine stipulated in the statements of Rev. De Wolf. They should show that they have a firm resolve to adhere to the doctrines of the Protestant Reformed Churches as formulated in the three Forms of Unity and restated in the Declaration of Principles which clearly militates against the error of common grace and the conditional doctrine which at one time sought to be imported into our churches. Doing this they may once more be assured of a healthy and sound denominational life which can be maintained only where the truth is preserved. 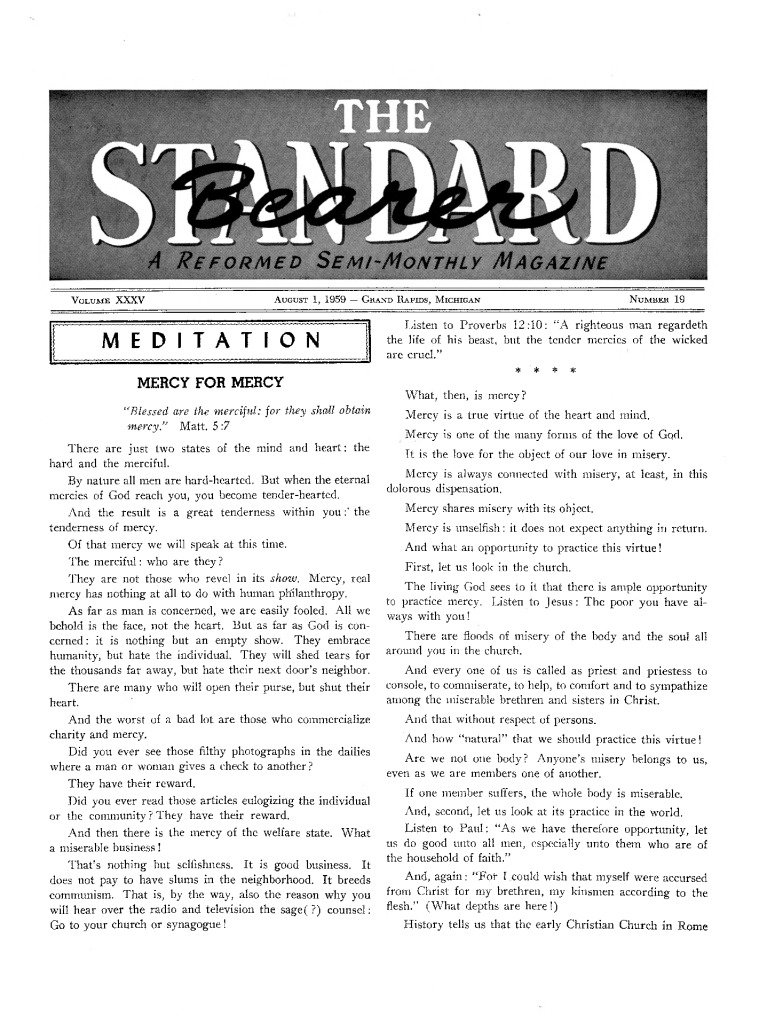