In this context Jesus is speaking of the coming of the kingdom of God and of the days of the Son of Man. He warns His disciples not look for anything spectacular as indicating His immediate appearance upon the clouds of heaven. There are those who will say: “Lo, he is here,” or: “Lo, he is there,” but we are not to pay any attention to these false Christs. O, it is true that mighty signs precede His coming throughout the new dispensation, and these signs are surely spectacular. But people will grow horribly accustomed to them, and the coming of the Son of Man will not disrupt life in the midst of the world. “And as it was in the days of Noe . . .”; “Likewise also as it was in the days of Lot. . . .”

“Remember Lot’s wife”—what a terrible notoriety! Do not imagine that we can ignore and forget this terrible example. We must do one of two things: either do as Lot did and flee for our lives, or we must do as Lot’s wife did and turn back. A neutral position is impossible! Hence, remember Lot’s wife. We are in the midst of a very evil world. All things are corrupt and work corruption. We do well to flee for our lives, and not to turn back as did the wife of Lot.

The world is enroute to destruction! This was true in the days of Lot as well as in the days of Noah. The time had come when those wicked had filled their cup of iniquity, had reached that pinnacle of sin whereof they were capable. And therefore the moment had come when their destruction was at hand. The Lord had announced this to Abraham, Gen. 18.

The world, also today, is rushing to destruction. All things are evil and corrupt and work corruption; all things serve to satisfy the lusts of the eyes, of the flesh, and the pride of life; everything is adapted to satisfy man’s inner craving for iniquity. Chastity is rapidly disappearing; the unmarried may live as though they were married; disrespect for law and order in the home and in the school and in the state is rampant; in the church the very foundations of the truth are undermined and denied; Genesis 1-3 is repudiated, declared a myth. All things are hastening to the final manifestation of sin in all its fearful reality; the world is rushing pell mell to destruction.

Lot’s wife had been fully warned! Indeed, the announcement of Sodom’s doom had not come to Sodom, but to the house of Lot—see Gen. 19. Lot’s wife, however, had been fully warned. The heavenly messengers had come to Lot. That they came toward evening, appearing as ordinary men, implied that everything appeared as usual. It was, of course, not at all uncommon for strangers to approach a city toward evening. That they appeared as strangers and ordinary men would also give the inhabitants of Sodom the opportunity to reveal to them their sin. And, entering Lot’s house, they would experience Sodom’s wickedness in a far more aggravated manner than had they remained in the streets that night. They would now also abuse Lot’s hospitality to strangers.

According to Gen. 19:13 the Lord had sent these angelic messengers to destroy Sodom and Gomorrah and all the cities of the plain. That these were heavenly messengers is verified by the action of these angels when they strike the inhabitants with blindness. These Sodomites would commit the sin of sodomy against these messengers of the Lord, committing the sin whereof we also read in Rom. 1:17. And this sin of homosexualism should be condoned, as it is in the church today! Hence, when these messengers announce to Lot the imminent doom of the cities, Lot and his wife are surely fully warned. That the angels strike the carnal horde with blindness is indisputable evidence that they were sent by Jehovah, the Lord God of hosts.

We must, of course, apply this also to ourselves. First, we have here the example of Sodom and Gomorrah and the wife of Lot. Fact is, these cities of the plain were destroyed; and the Dead Sea is loud evidence of the fearful destruction visited upon them. Besides, the fact stands before us that the wife of Lot was changed into a pillar of salt.

Secondly, there is also for us the example of our Lord Jesus Christ. He spoke, as the Servant of Jehovah, the judgment of the Lord. How He condemned the wicked, declaring unto them that they were the children of the devil, white coated sepulchers, etc! How He strove for the righteousness of God! How He declared to them that in Him the kingdom of God and of Heaven was at hand, but also was reserved only for the hungry and thirsty! And God had highly exalted Him! Indeed, upon Him they poured all the hatred and venom of their evil heart. They ridiculed Him, even as they ridiculed Noah and Enoch and Lot and all the saints throughout the old dispensation. They mocked and taunted Him, hated Him without a cause, finally killed Him upon the cross of Calvary. But God vindicated and justified Him. The Lord vindicated Him in such a way as to leave no possible doubt in the mind of friend or foe.

Thirdly, there is also Christ’s testimony in the Scriptures. He speaks of the impending judgments of the Lord’s wrath and indignation. He speaks of all the signs that must characterize His coming. And these signs are being fulfilled before our very eyes. What more, I ask you, can and need be done to warn the wicked of God’s impending and certain judgment? Indeed, the world is fully warned!

How carnal is Lot’s wife? Her calling is plain. There is, first of all, the fact that these visitors were divine messengers, and of this she was surely convinced. Secondly, there is the heinous sin of these Sodomites. On the one hand, they would commit this sin against these visitors. Then, being opposed in this by Lot, they would vent their frustrated fury upon him. Thirdly, we must also notice the reaction of the children of Lot. Of this we read in Gen. 19:12, 14. Imagine: they ridicule their father, “laugh him out of court.” So, her calling is plain. On the one hand, she should have turned to the Lord in humble gratitude, confessed her sin, and fled to Him for safety. On the other hand, she should have turned her back upon Sodom and its iniquity, also the iniquity of her children, and concurred in the fearful judgment of Jehovah upon these wicked cities of the plain.

How great is her sin! First, she clave to Sodom. We read in verse 23: “When the sun had risen and Lot had come toward Zoar.” Lot, therefore, was on the way thither and had not yet arrived in that city. Then the Lord rained brimstone and fire down from heaven upon the doomed cities. And we read of her that she looked back from behind him—she retreated behind Lot and stood and looked back. In spite of the clear commandment of the Lord (verse 17), she disobeyed that commandment of Jehovah. In spite of the fact that the Lord was actually destroying the cities, she disobeyed that commandment. She disobeyed because, although forced to flee, having been taken by the hand by the messengers of the Lord, her heart had remained in Sodom; she longed for that which she had been forced to leave behind her. It was the sin of utter carnality, even while the Lord was raining destruction down upon the city.

Secondly, she rejected the judgment of the Lord. She chose her lot with the enemies of Jehovah and over against the Lord. Rather than join in the judgment of the alone living God and acknowledge Him in all the beauty and glory of His holiness, she loved sin and the things that are below and condemned the God of heaven and earth.

If despite the fearful announcements of God’s judgments as they lie before us in the infallible Word of God; if despite the example of our Lord Jesus Christ to which we have already called attention; if despite the fact that the judgments of God are in the earth, being fulfilled all around us and before our very eyes as in complete harmony with Jesus’ own prophetic word; if, despite all this, we continue to look back, setting. our hearts upon the things that perish, the pleasures and treasures of this present evil world; if we do not flee from the wrath of God to come, do not take refuge to the only relief set before us in the cross and resurrection of our Lord Jesus Christ; if we continue to seek the earthy and to despise and ignore the coming to judgment of the alone fearful God in Jesus Christ, our Lord; what else is this but the manifestation of the fact that we are wholly carnal, would rather satisfy the lusts of the flesh for a season and perish forever rather than to turn away from sin and to serve the living God? It means that the announcements of the fearful judgments of the Lord and our continuing in sin merely serve to emphasize and bring into sharp focus all the awful and complete carnality that is ours and our bondage to sin and iniquity.

Lot’s wife perished. Fearful was the destruction of Sodom and Gomorrah. Even to the present day the Dead Sea gives us a vivid testimony of this terrible catastrophe. In addition to Sodom, which was probably the chief city of the valley of Siddim, Gomorrah and the whole valley of Siddim are mentioned. May we think of the cities that were submerged underneath the burning lava that poured out of Mt. Vesuvius, engulfing them as in a moment? And the wife of Lot? Looking back, she may have been killed by the fiery and sulphurous vapor with which the air was filled and then encrusted with salt, so that she became as an actual statue of salt. Be this as it may, she was struck down by the judgment of the Lord; she perished, inasmuch as upon her disobedience and carnality the judgment inflicted upon the cities of the plain was also inflicted upon her.

Eternal destruction is ever the lot of those who seek the things that are below and despise and reject the fearful judgments of the Lord. “Remember Lot’s wife,” is a word that also comes to us, except that it comes to us, as in the new dispensation, with a far more frightening emphasis. How much greater is our knowledge than at the time of Lot! May we remember her, and heed this word of God by His grace, we with our children. At first Lot was hesitant, and then he complains that he cannot escape to the mountain. How often the world lies to us: “You are quite safe where you are; do not be in any hurry to go”; and later it lies: “You can never escape now.” Let us, by the grace of God, reverse these whimpering fears of Lot. Let us be ready, always, also now, to heed God’s command, flee from the wrath to come, take refuge to Him and to His Christ, walk in the way of His cross and His commandments, and then believe that where He leads us we are safe and all is well. The world is enroute to everlasting ruin. By the grace of God, remember Lot’s wife. 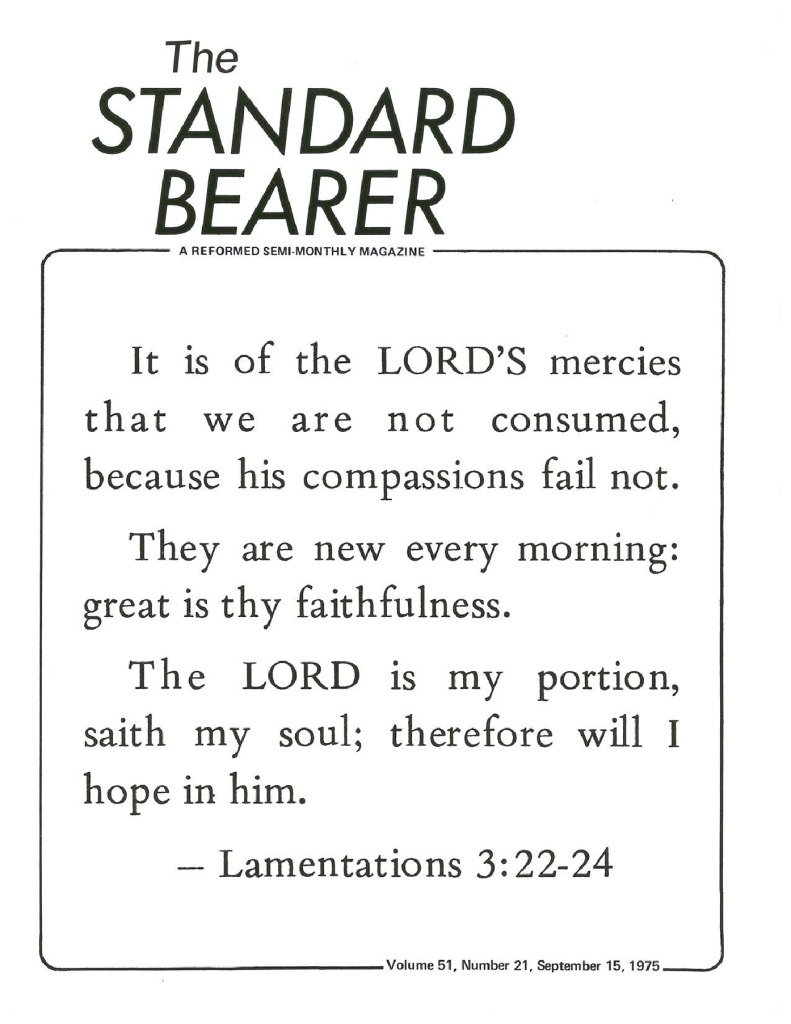