The previous article showed that angels are in God’s decree of reprobation. They have been ordained to condemnation and to eternal judgment, a certain definite number of them. Since the elect angels had never fallen, all the angels were, in the decree of God, viewed neither as yet created, nor as yet fallen. It ought to be readily understood that not first with respect to the decree of the angels was their creation. This is not true, even with respect to the plan of a man. He first plans to have a house before he determines to build a house. When he decides (decrees) to have a house, then he may not only decide to build it, but also to build the most amazing structure you ever saw out of cast-offs and ruins. The church has always been mocked by the world with some such ridicule as, “Will they revive the stones out of the heaps of the rubbish which are burned?” (Neh. 4:2). But that is exactly what God Himself will do in the building of His church. His church is brought out of hell’s rubbish.

But men, too, are included in God’s decree of reprobation. It is right here that the idea of sovereign reprobation is so offensive. That some of the angels have been pre-ordained to damnation is not the cause of very much concern to us. That they were cast down to hell, that they were even eternally damned before they had done any good or evil, we can hear with very little emotion, and with not the least thought of charging God with injustice, cruelty and no mercy. But at just a hint of the reprobation of man, and a great outcry is made against the idea. The reason for this is because the matter now comes much closer to home. It affects us! We are naturally partial to ourselves and to our race. Yet God’s decree of reprobation with respect to the angels reveals a much greater severity: the fallen were not spared, no grace was provided them, no savior brought to them. They were from eternity consigned to everlasting ruin. Now there are not only elect men, but also reprobate men. Jesus said of such a small body as the apostolate, “I speak not of you all; I know whom I have chosen” (John 13:18). He has a very particular knowledge of His chosen ones, a knowledge that is beautifully expressed in, “I know My own, and My own know Me” (John 10:14, ASV). To the rest He shall say in the day of judgment, “Never was I knowing you!” (Matt. 7:23, Gk.). Never at any time did He know them as His own. Their names were never written in heaven. They never believed in Him to the saving of the soul. Why not? Jesus Himself answers, “Ye believe not because ye are not My sheep.” This truth of reprobation is offensive to the natural man and to the flesh in the Christian. But it is Jesus’ own teaching!

“Moreover, whom He did foreknow He also did predestinate to be conformed to the image of His Son.” Not all are conformed to that perfect image of the Son. Some are and remain in the image of the devil. They consequently imitate their father, the devil. Further, “whom He did predestinate, them He also called.” But though many are called, few are chosen. Not all are called. Some are not even outwardly called. They sinned without law, they perish without law. “Whom He called, them He also justified.” Not all are justified. There is a world to be condemned: I Cor. 11:32. Not all are children of God or heirs of Christ. Some are vessels of mercy, indeed, but some others are vessels of wrath. “And whom He justified, them He also glorified.” Certainly not all are glorified. The vessels bf wrath were fitted to destruction and go into everlasting punishment.

Reprobation was determined sovereignly, and before the fall. “For the children being not yet born, neither having done any good or evil, that the purpose of God according to election might stand, not of works, but of Him that calleth . . . Hath not the Potter power over the clay, of the same lump to make one vessel unto honor, and another unto dishonor?” (Rom. 9:11, 21). Here mankind is viewed in the pure mass of creatureship. It is not viewed with sin, as corrupt and fallen, as though all men were originally fit for dishonor, some being left in that dishonor, while others were translated from dishonor to honor. No, but all the vessels are taken from the same unfallen lump, and some are made unto honor and some to dishonor. Also Pharaoh’s hardening was not merely a judicial hardening, because he despised and refused the truth. For “whom He will, He hardeneth.” It is not man’s hardening which is first, but God’s. We are not sufficient of ourselves to think anything as of ourselves (II Cor. 3:5). Even “the preparations of the heart in man, and the answer of the tongue, (are) from the Lord” (Prov. 16:1). Yet “the king’s heart is in the hand of the Lord, as the rivers of water: He turneth it whithersoever He will” (Prov. 21:1). Therefore, “for this same purpose have I raised thee (Pharaoh) up, that I might show My power in thee, and that My name might be declared throughout all the earth.” (Rom. 9:17). Calvin tells us that here we have two things, the predestination of Pharaoh to ruin according to His eternal counsel, and the purpose of this decree of reprobation, which was to make known the name of God. The cases of Pharaoh and Esau are used in Romans Nine “to prove the doctrine of reprobation as the counterpart of the doctrine of election.” “It is written, ‘Jacob have I loved, but Esau have I hated'” (Rom. 9:13). Take your concordance and check the passages where men are said to hate, and you will find that the meaning of the word hate is not according to Scripture softened to “loved less.” Where you read that “He hath mercy on whom He will, and whom He will He hardeneth,” the word hardeneth cannot be softened to “shows less mercy.” Paul in this chapter does not bother to defend the doctrine of predestination against charges of (God’s!) injustice. His argument is that God in the cases of these reprobate men displayed neither justice nor injustice, but His free sovereignty. “Whatsoever His soul desireth (wills, decrees), even that He doeth.”

God’s sovereign acts are beyond all complaint of man. Paul in answer to a complaint that is always made replies, “Thou wilt say then unto me, Why doth He yet find fault? For who hath resisted His will?” The complaint is that election and reprobation are incompatible with human responsibility. Paul’s thinking and teaching here are inconsistent with the facts of man’s responsibility, and therefore Paul must withdraw and correct his position. It is saying too much, as Paul had said in verse 18, “He hath mercy on whom He will, and whom He will He hardeneth.” This only opens the way for all kinds of fault-finding to be made against God. The argument is really saying, Why did not God have mercy on all? Why did He not make allobedient? and so put fault-finding once-and-for-all right out of court. Paul does not concern himself with this objection. He does not bother to repudiate it. He does not say, for example, Oh, you misunderstand me; God does not find fault. Men may and do resist Him. Paul is not worried about being inconsistent with man’s responsibility, as though that could ever be lost! and therefore he must certainly withdraw his extreme position. No, Paul knows perfectly well what may be lost—the sovereignty of God, as held and maintained in the true church. Nor is Paul concerned with the manufactured difficulty dumped into his lap, that of reconciling God’s sovereignty and man’s responsibility. Paul never felt any need for reconciling that which never needed any reconciling. The two are perfectly good friends, have always gotten on well together, never were separated, nor can be, and so need no reconciling. What Paul replies in verse 20 to this objection is that, You argue, not against me, but against God. For your objection you have no right, no reason. A potsherd of the earth has no complaint against the almighty Potter, or against His sovereign will. “Whom He will, He hardeneth!” God can and does do as He wills. The destiny of man is in God’s hands. “It is not of him (man) that willeth, nor of him that runneth.” “Is it not lawful for Me to do what I will with Mine own?” (Matt. 20:15).

This sovereign act of reprobation God works effectually. The efficient cause of it is God. “Our God is in the heavens; He hath done whatsoever He hath pleased, Whatsoever the Lord pleased, that did He, in heaven, in earth, in the sea and all deep places. He doeth according to His will in the army of heaven and among the inhabitants of the earth, and none can stay His hand, or say, ‘What doest Thou?’ We have obtained an inheritance; being predestinated according to the purpose of Him who worketh all things after the counsel of His own will” (Ps. 115:3; Ps. 135:6; Dan. 4:35; Eph. 1:11). God is the cause of it. He says, I hated! I raise thee up! I show My power! Then you read, He will! He hardeneth! He has power over the clay. He afore prepared unto glory! He fitted to destruction! It cannot fairly be said that the reprobate fitted themselves this way. The tense of the verb is the perfect passive participle, “having been fitted for destruction.” Esau did not fit himself the object of divine hate. “Esau I hated.” Pharaoh did not raise himself up a monument to God’s severity; I did, saith the Lord.

What is the moving cause of the act of reprobation? Nothing other than the will of God. Not man’s sin, but the good pleasure of God moved Him to it. Sin when it is finished bringeth forth death, for death is decreed for sin. But sin is not the cause of God’s decree. The decree of reprobation was before either sin or righteousness (Rom. 9:11). The decree of God damns the reprobate. It damns him for his sin. Sin is the cause of his ordination to condemnation, but not the cause of the ordination itself. That is, sin is the cause of the thing willed (condemnation), but not the cause of the will. An aspect of divine election and reprobation is expressed in Jesus’ prayer, “I thank Thee, Father, Lord of heaven and earth, that Thou hast hid these things from the wise and prudent, and hast revealed them unto babes.” What is the most ultimate cause of this two-fold effect of predestination is expressed in the following words, “Even so, Father; for so it seemed good in Thy sight!” (Matt. 11:25f).

Here is abundant Scripture evidence for the doctrine of reprobation, which we have given. For much, much more, consult the proof texts quoted in Boettner’sReformed Doctrine of Predestination and Berkhof’sTextual Aid to Systematic Theology. 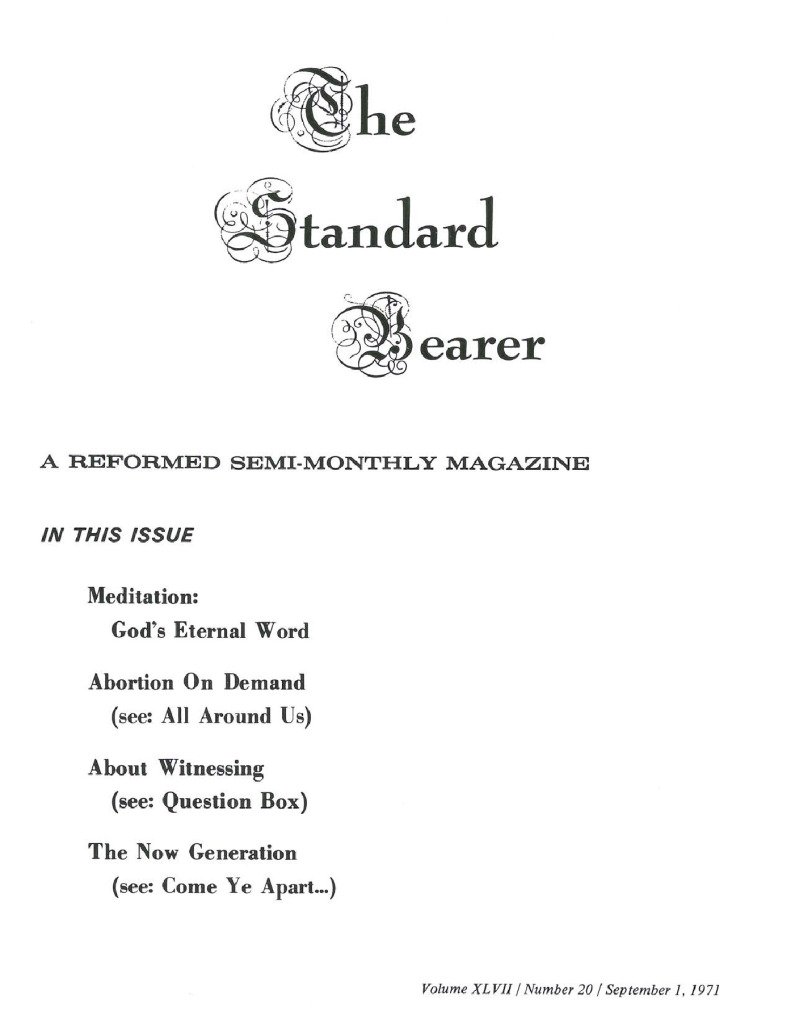