A couple of years ago when this country first became alarmed at the rapid spread of AIDS, Rev, Jerry Falwell expressed the opinion that this dreaded disease was the judgment of God on the sin of homosexuality. The howl that arose from the media reverberated from one end of the country to the other. If it was within their power, the media leaders would undoubtedly have tarred and feathered him and ridden him out of the country on an iron rail.

More disturbing was the fact that the ecclesiastical press, almost in unison, also joined in this clamor of condemnation and painted Falwell as a religious bigot who had no sympathy for homosexuals and who made the Biblical God of love and compassion some kind of monster and tyrant. Falwell found himself in a whirlpool of controversy.

But was he wrong? The relationship between the AIDS epidemic and the sin of homosexuality brings sharply before us the crucial issue of the morality of this terrible sin. It does so not in an abstract way, but in a very practical manner which underscores the deep chasm not only between the church and the world, but also between one segment of the church and another.

It is to the basic question of homosexuality that we shall address ourselves in this and in subsequent articles. It is with some hesitation that we write on this subject. The sin of homosexuality is so repulsive, so evil, so utterly degrading that one is reluctant even to speak of it. Paul reminds the Ephesian Christians (Ephesians 5:12) that there are things done in secret among the ungodly concerning which it is a shame even to speak. But silence on such a question in today’s world is impossible for the Christian. It would be tantamount to losing the battle against this perverse sin by default. It would be retreating from the battlefield to permit Satan full sway. It is a shame indeed to speak of these things. It is a shame that we have to speak of these things. But for the honor of Christ and the glory of our God this is a shame which shall have to be borne.

The sin of homosexuality has dramatically increased in our day, especially in America and Europe. While the sin goes back to many ancient cultures in the countries surrounding Israel and. in ancient Greece and Rome, it has reappeared in today’s world with a vengeance.

But there, are important differences. Throughout the history of the world the sin of homosexuality has always, even in heathen lands, been considered a sin, or at least a serious aberration from commonly accepted norms of sexual behavior. While fairly common in some cultures, the general opinion among the heathen was one of disapproval. It was, after all, a sin against nature.

Today this is no longer the case. In 1957 The Wolfenden Report was issued in England. It was based on a 1954 meeting of physicians and Anglican clergy and it recommended that homosexual behavior between consenting adults in private no longer be considered a crime. This report was adopted by the English Parliament and it opened the floodgates of a tidal wave of immorality which has continued to grow until it threatens to inundate the land.

Homosexuality is not considered a crime anymore in our land. It is not even considered a sin. It is said to be a sexual preference, an alternate life-style, a completely acceptable way of living. In some states marriages are performed between homosexuals, and such couples are given the right to adopt children. (In other instances, where lesbians are united in such a relationship, one of the women agrees to have a child either by artificial insemination or by in vitro fertilization of her ova.) Various anti-discrimination laws are passed by state legislative bodies which prohibit schools from firing or refusing to hire homosexuals; which- force property owners to rent to known homosexuals; which prevent employers from firing homosexuals. Wooly-headed liberals, who hate the law of God and are determined to eradicate from this country any reference to religion, push for accepting homosexuals into every aspect of public life with rights equal to any law-abiding citizen. Political parties and candidates, intent on winning elections at any cost, openly cultivate the friendship and support of homosexuals and cater to their clamor for equal rights under the law. Populist coalitions, formed to help power-hungry candidates grab the reins of government, are formed of people who are pro-abortion, pro-homosexuality, pro-pornography, but anti-religion. Gay groups march openly and use the power of sit-ins, pressure groups, threats, demonstrations, and illegal riots to gain their ends. Hardly a day goes by in which references to some such ugly groups are absent from the newspapers. In such a climate we have been called to live.

Worse, the church has joined in this clamor for “gay-rights:” Methodist, Presbyterian, Episcopalian, and even Reformed have, in greater or lesser measure, caved in to the pressures of homosexuals and approved of a sin clearly and unequivocally condemned by the Word of God. One can find churches composed of homosexuals in some cities. One can find known homosexual members in almost every mainline denomination in the land. Homosexuals have even been ordained to offices in the church, including the ministry of the Word of God. The church smiles benignly, speaks piously of its great love and mercy to the under-privileged and hated, and hypocritically prates about its loyalty to Christ. But this same church turns with savage anger against anyone who dares to call homosexuality a sin which comes under the fierce anger of God.

The Scriptures are clear on the sin of homosexuality, and the question arises how it is possible for the church which condones this sin to get around these clear Scriptural passages.

It might be well to take a brief look at this matter. It is very striking that those in the. church who condone homosexuality in one way or another and attempt to explain away Scripture’s clear teachings on these matters make use of very current views of Hermeneutics (the, science of the interpretation of Scripture). This is not the proper place to enter into detail on these matters, but one ought to be aware of the point that the fundamental issues are, after all, issues of Scripture and its interpretation. The supporters of views condoning homosexuality appeal to literary-historical criticism of Scripture, to the fact that the Scriptures are time-and culture-conditioned, and to the inevitable conclusion that Scripture speaks in a foreign context and to ancient problems which have no relevance today.

Here is how it all works out. The sin of the men of Sodom who clamored at the door of Lot’s house to have wicked sexual relations with the angels who visited him on the eve of Sodom’s destruction (Genesis 19:1-11), and the similar sin of the inhabitants of Ramah-Gibeah in Benjamin who wanted to have homosexual relations with the Levite from Bethlehem-Judah (Judges 19:22-28), are interpreted to refer to sins against ancient customs concerning hospitality. The passages in Leviticus (Leviticus 18:22, 20:13) which require the death penalty for homosexuals are said to refer to a warning to Israel not to engage in the temple prostitution of the Canaanites when they finally arrived in the land. The strong passage in Romans 1:18-32 (a passage to which we shall have to give closer attention later) is said to speak not of homosexuality at all, or, if it does, to refer only to pedastry (homosexuality with young boys) or to unloving relationships between members of the same sex. The implication is that as long as a homosexual relationship is a loving and caring relation, it is good in the sight of God. Other warnings in Scripture, such as those found in I Corinthians 6:9, 10 and I Timothy 1:10, are explained in the same manner.

It is well to remember that the basic issue is once again the issue of Scripture. So it is with the creation-evolution debate; so it is with the whole question of women in office; so it is with attempts to defend homosexuality. Scripture is the issue. And let there be no misunderstanding about this question: Because Scripture is the issue, the issue is the spiritual issue of faith vs. unbelief. If by faith we believe God’s Word and bow before it, there is no question about it that homosexuality is condemned in the sharpest possible manner. To reject the Bible’s teachings on this issue (as well as on others) and to attempt to explain away by devious hermeneutical tricks this great sin is to be guilty of the sin of unbelief. We must not permit ourselves to get bogged down in nice theological or exegetical discussions about fine points of Scriptural interpretation; we must recognize the whole problem for what it is: a single instance of the great battle of the ages between faith and unbelief. And that issue is, finally, the whole issue of salvation vs. everlasting destruction.

Scripture is clear on the matter. The sin of homosexuality (among other sins) made Sodom ripe for destruction and brought God’s fierce wrath upon that city. The inhabitants of Ramah-Gibeah (and the citizens of the tribe of Benjamin who supported them) were destroyed because of this sin so that the whole tribe almost ceased to exist. God says in His law that those guilty of this sin are worthy of death. Paul tells us that the sin of homosexuality is a particular judgment of God against the sin of idolatry: God gives over idolaters to the sin of homosexuality. And the references in the New Testament to this sin make clear that those who are guilty of it cannot enter the kingdom of God. 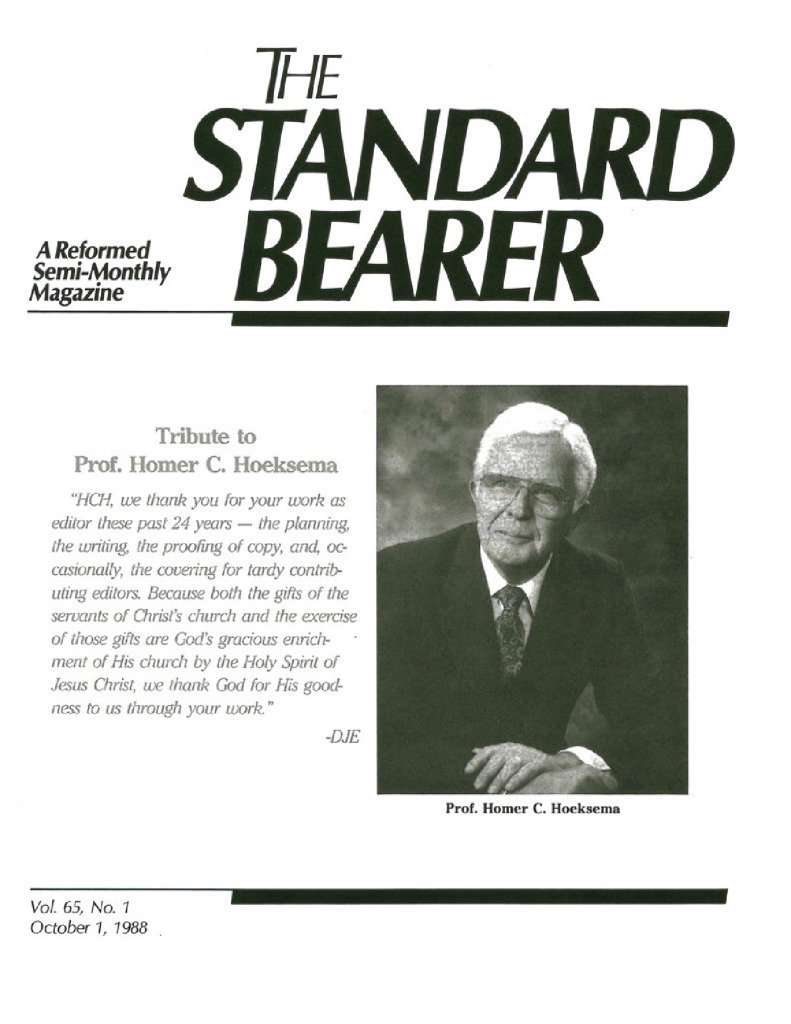