I am convinced that articles of this nature should not appear in a periodical of the caliber of our Standard Bearer. I do not believe that The Standard Bearer is or ever was intended to be a medium to propagate material in which motives are misrepresented or are not investigated. This, I believe, Rev. Schipper did when he called the name and reputation of Christian High School into question by referring-to an article inLiterary Cavalcade which was supposedly assigned to all the students of a particular class.

I am convinced that a writer may never rush into print unless he has first consulted the party in question and in this case I am sure Rev. Schipper never did. If he did, he should tell us.

I do not believe that such journalistic ethics may be left unchallenged nor should they be tolerated. Matthew 18 always applies, it seems to me, whether we are dealing with one personal or a communal organization.

The statement which follows is also very unnecessary, it seems to me.

“We are primarily critical of our Christian institutions of learning that will resort to this type of literature as a means of instruction, and the teacher who most likely believes that due to the common grace of God we have here a work of art which our covenant children should appreciate. (Italics mine.)

This statement is highly questionable because the writer, Rev. Schipper, assumes something that he cannot prove because he apparently never talked with the teacher who “assigned” the work. Rev. Schipper assumes that the teacher thought this was a work of art which the student should appreciate.

Literature is not always intended nor used for mere appreciation. Literature must also be evaluated. Does Rev. Schipper know whether the teacher intended to evaluate the literature in question?

Rev. Schipper used it and he then evaluated it and the institution that used it. How about that?

May we measure with two measures?

The English Staff of Grand Rapids Christian High School was sorely disappointed this past week to read the column entitled All Around Us in the March 1 issue of The Standard Bearer. We were disappointed because we feel that our school has been misrepresented and that our good name has been maligned. The purpose of this letter is to set the facts straight. We call the attention of the readers of this periodical to the following:

1. The Litera:vy Cavalcade is a monthly magazine of contemporary literature for senior high school English classes. At G.R.C.H. it has been used with considerable profit over the past many years long enough to establish our faith in its regularly high-caliber offerings.

2. Presently, the Literary Cavalcade is being used in three of our English classes, all for non-college preparatory seniors.

3. In reference to the play under attack, The Green Pastures by Marc Connelly, the Reverend M. Schipper errs when he charges that one of our teachers has “compelled the student to read this kind of stuff.” To set the record straight no assignment was given at any time to have the students read The Green Pastures. In fact, the teacher involved deliberately avoided this selection and even cautioned at least one of his classes concerning its use. In the light of this, we find especially objectionable Reverend Schipper’s censor of “the Teacher who most likely believes that due to the common grace of God we have here a work of art which our covenant children should appreciate.”

4. We also sometimes use Time Magazine, Newsweek, and The Reader’s Digest as supplements to some of our courses. No one of these is free from occasionally objectionable material, no more than is the newspaper which comes into our homes.

Apparently the Reverend Schipper has been misinformed. This is not surprising in that he himself says that he received his information secondhand. We close with the suggestion that, in deference to the spirit of brotherly, love enjoined upon us by Scripture and out of concern for the good name of our Christian schools, those taking exception to any report or rumor concerning the educational program of our school should consult us directly. It is at this level, rather than in our church papers, that remedial action can best be taken if and whenever it is needed. 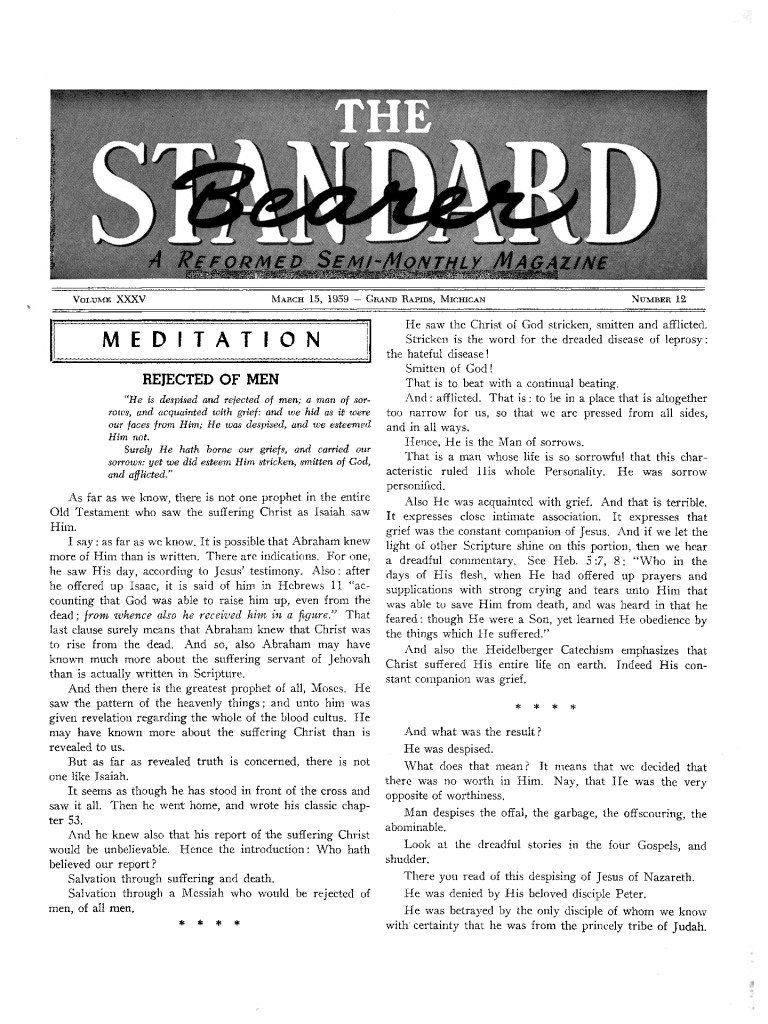