Another Look at Nonresistance

There is good reason to take another, closer look at the Christian’s duty to submit unconditionally to the authority of the civil state. (As to this duty and other aspects of the relationship of church and state, confer our special issue of December 1, 1988.) Reformed Christians everywhere in the world today must work out their salvation in a revolutionary environment. Many Reformed people in the United States have been taught from childhood on in the Christian schools (but not in Protestant Reformed Christian schools) that the Revolution in which this nation was born was justified, if it was not a Christian, indeed a Calvinistic, enterprise. The black revolutionary of the 1960s, H. Rap Brown, gleefully seized on this axiom of American political life to silence the critics of his incendiary behavior on behalf of freedom and justice for the blacks: “Revolution is as American as apple pie!” Martin Luther King, Jr.’s tactics of “civil disobedience” find widespread approval in the Reformed community. Reformed churches join the world community of churches in vigorously supporting the very active resistance to the government of South Africa by a segment of that nation’s population, one of whose leaders is the Reformed preacher, Allen Boesak. Influential Reformed theologians teach that revolution under certain circumstances is an option for Christians. In his essay, “Church and State,” Karl Barth maintains that serious Christians must reckon “with the possibility of revolution, the possibility . . . that we may have to ‘overthrow with God’ those rulers who do not follow the lines laid down by Christ.” Barth’s disciple, the Lutheran pastor, Dietrich Bonhoeffer, followed Barth’s advice by involving himself in a plot to assassinate Hitler, for which Bonhoeffer was executed by the Nazis.

The reference to South Africa calls to mind the fact that the issue of resistance or nonresistance to governments regarded as unjust and oppressive is not an academic question for many Reformed saints. Rather, it is an agonizing question, involving not only the risk of earthly liberty and even physical life, but also, and much more importantly, a good conscience before God. What is the calling of the Reformed Christian in South Africa as regards the use of physical force to resist the laws of that nation and thus the government itself? What is the calling, let us say, of a black Reformed Christian in South Africa who is convinced that the laws of the land are unjust and oppressive?

Presbyterian Christians in Northern Ireland are under similar disobedience to certain laws, threats to make the nation “ungovernable,” and other rebellious actions are the order of the day as tactics by which Ulster is to be saved for Protestantism and for God. The Presbyterian who refuses to countenance this political activism, much less participate in it, runs the risk of condemnation as a traitor to church and country. In the midst of the turmoil of this passionate, volatile mixture of politics and religion, the Presbyterian Christian must know how to please God and must find his way, and the way of his family, to heaven.

Living in the same kind of turbulence, tugged at by the same kind of temptations, and writing with one eye on his beloved France and the persecution of the Reformed church there (a persecution unto death), John Calvin flatly and absolutely forbade resistance (revolution) on the part of Reformed Christians. Even though the civil rulers “perform not a whit of the princes’ office,” but are “intent upon their own business, put up for sale laws, privileges, judgments, and letters of favor . . . drain the common people of their money, and afterward lavish it on insane largesse . . . exercise sheer robbery, plundering houses, raping virgins and matrons, and slaughtering the innocent,” they must be “held in the same reverence and esteem (as) . . . the best of kings,” because in their office they possess Gods “holy majesty” (Institutes, IV, XX, 24, 25). “If we are cruelly tormented by a savage prince, if we are greedily despoiled by one who is avaricious or wanton, if we are neglected by a slothful one, if finally we are vexed for piety’s sake by one who is impious and sacrilegious,” our only recourse is “to implore the Lords help” (Institutes, IV, XX, 29). The duty of the citizen to submit is not conditioned by the rulers’ faithfulness in carrying out their responsibilities. Rulers have responsibilities; and Calvin reminded them of those responsibilities sharply. “But if you conclude from this that service ought to be rendered only to just governors, you are reasoning foolishly” (Institutes, IV, XX, 29). Under the most intolerable governments, private individuals may only “obey and suffer” (Institutes, IV: XX, 31).

The instruction of Calvin to the individual Christian is simple: “You must submit unconditionally to the civil rulers ‘who, by whatever means, have got control of affairs,’ which means that you may never, under any provocation whatever, actively resist; you must obey all laws that do not require you to disobey God; if you must disobey (and you must, if, e.g., the state forbids you to worship God according to the Reformed faith), you may not use the disobedience as a launching-pad for revolution, but rather patiently bear the consequences of suffering at the hands of the wicked rulers; and you must do all this, not as shrewd policy that knows that revolution is usually futile and results in worse misery (though this is true), but as faith’s submission to the Lord Christ—you are willingly, joyfully, actively serving the Lord Jesus, even as every rebel is in reality resisting, not the state, but Christ.”

Students of Calvin’s theology do not take issue with this presentation of Calvin’s teaching as to the political calling of the Christian. But they reject the teaching itself, as unworthy of the Reformed theologian. Writing in the recently issued book,Calviniana: Ideas and Influence of Jean Calvin(Kirksville, Missouri: Sixteenth Century Journal Publishers, Inc., 1988), the noted Calvin scholar, W. Fred Graham states:

There is little doubt that the genius of Calvin did not extend to his analysis of political order, especially to his advice to Christians who labored under rule so unjust that their very lives were in jeopardy. Students (like myself) who appreciate his balanced, supple, and insightful work in Christian doctrine and scripture exegesis are suddenly brought up short at his impoverished and traditional views of political order, and his injudicious use of the Bible as he tries to explicate hard cases, such as Huguenots who daily walked down the valley of death in his beloved France.

Graham is displeased with Calvin’s insistence on nonresistance.

There are at least three reasons why Calvin took the position that he did. None of them is that Calvin was unsympathetic towards Reformed saints suffering under tyranny, or that Calvin was a passive individual, or that Calvin had deep psychological problems. All of the reasons hold good today, as in every age, so that those who engage in resistance towards the state, or support those who are resisting, come under the judgment of these reasons for submitting. First, Calvin found nonresistance to be the teaching of the Bible. Jesus’ command to Peter to “put up again thy sword into his place” in Matthew 26:52 and Jesus’ declaration to Pilate in John 18:36 that the heavenly nature of His kingdom is evident in that His servants do not fight are law for Jesus’ church, that she may not defend Jesus Christ from violent assault (which is what persecution for the truth’s sake really is) nor promote His kingdom by physical force. The prohibition of Romans 13:17 against resisting the authorities, even when the authority is ungodly and antichristian Rome, and the command of I Peter 2:13ff. to submit to the civil rulers with explicit appeal to the example of Jesus Himself, “Who, when he was reviled, reviled not again; when he suffered, he threatened not; but committed himself to him that judgeth righteously,” are the clear rule of the Word of God for the Christian personally, particularly for the Christian suffering injustice, and even persecution, at the hands of the magistrates. We ask Reformed men and women who are revolting and we ask Reformed thinkers and churches that are encouraging such revolt, “What do you do with these scriptures?” and, “Produce your biblical basis for resistance!”

Second, Calvin’s concern was to guide the believer on the way of a thankful, holy life which would bring honor to God here and which would bring the believer to eternal glory hereafter. Calvin was not interested to give a general political policy for all the citizens of a nation; nor was his purpose to change earthly nations so that earthly justice would prevail. The Christian has a calling from God with regard to government; and Calvin taught him what that calling is. We ask those who enthusiastically teach professing Christians to rebel, “Does your way honor the God and Father of Jesus Christ?” and, “Does this way lead men and women to eternal life in the Day of Christ?” “What if resistance, even though successful to overturn an unjust government and to gain some measure of physical relief for the citizens, defames Jesus as just another leader of a revolutionary band and brings down upon the rebels Gods damnation, asRomans 13:2 warns is the case?”

Third, for Calvin this earthly life was secondary and relatively unimportant in comparison with the heavenly life to which it leads and for which it is the training-ground for the believer. Christians ought to be willing to bear all manner of injustice and oppression, indeed they ought to expect this, in the patient hope of the life to come. This was Calvin’s encouragement of the cruelly persecuted Reformed saints in France in a letter in 1559:

Let us not then suppose that we are forsaken of God when we suffer persecution for his truth, but rather than he so disposes matters for our greater good. If that is repugnant to our senses, it is so because we are always more inclined to seek for our rest here below than in the kingdom of heaven. Now since our triumph is in heaven, we must be prepared for the combat while we live here upon earth. (Letters of John Calvin, published by the Banner of Truth Trust, 1980)

It is common for professing Christians to sneer at this spiritual philosophy today as “pie-in-the-sky Christianity”; but this only indicates the rarity of genuine Calvinism, i.e., true Christianity.

To dismiss nonresistance as mere passivity is the merest nonsense. Was Calvin then a theologian of passivity? Also, the doctrine of nonresistance allows the Reformed Christian a great deal of political activity within the law—activity to speak out; to petition; to vote; and even to form political organizations. But even as regards nonresistance itself, every believer knows from experience that the hardest work of all, a great and glorious activity of faith, is submitting to injustice for the Lord’s sake. To strike back when abused, to join the howling mob on the streets of Belfast or Johannesburg, to take up arms and fight the persecuting state so that one sheds a little of their blood before he pours out his own—this is the easier way.

In his teaching on the Christian’s political calling, as in so much else, Calvin learned from Luther. Our look at nonresistance ought to include the doctrine of Luther, if for no other reason than that it is outrageous that Reformed churches should be directed in their political action by Martin Luther King, Jr., while remaining ignorant of Martin Luther. 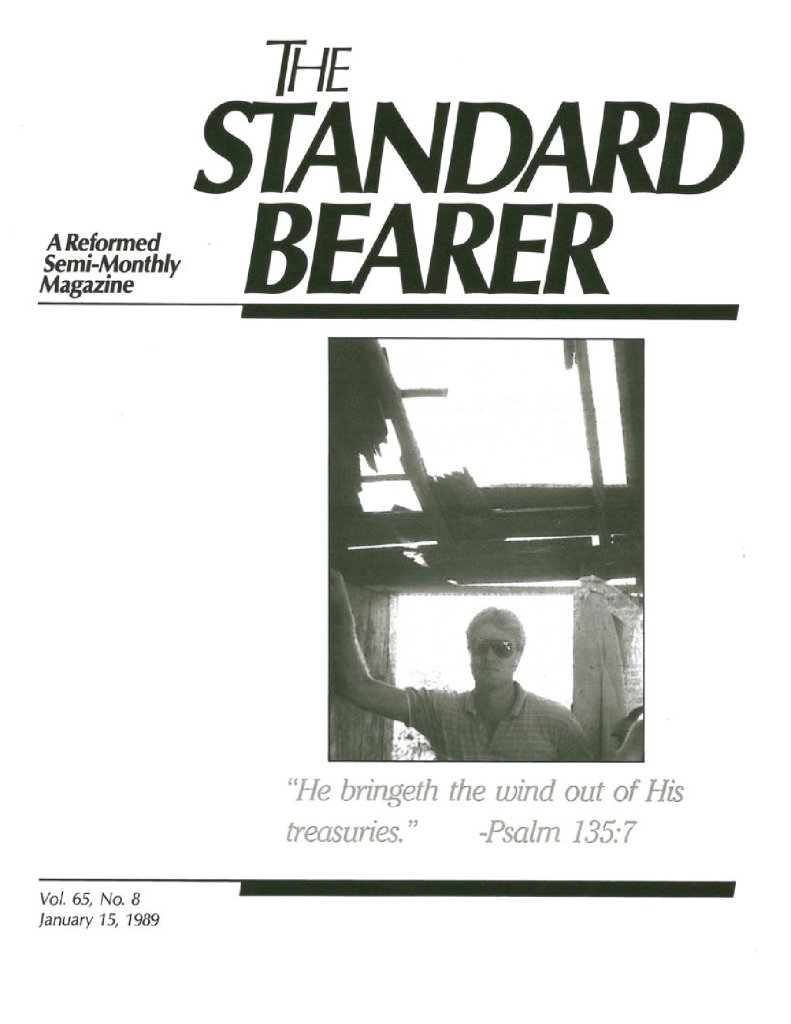