It was, of course, inevitable.

When the value of life has, under certain circumstances, dropped to zero, the value of life declines overall. The anti-life movement (euphemistically known as pro-choice) is growing. “Pro-choice” increasingly is seen in the claim that one has the “right” to choose death when confronting inevitable suffering, whether of old age or of some terminal illness. Now this “pro-choice” movement has developed further. It is claimed that any individual, for whatever reason, has the right to choose to die. There is the “right” of suicide upon demand. This was pointed out recently in the Chicago Tribune, September 21, 1999, where an article reported on “The Dutch solution.”

In Illinois, you have to be 21 years old before you can get a tattoo without parental consent. In the Netherlands, social attitudes are a bit more permissive. Under a new law proposed by the Dutch government, a child as young as 12, without the permission of her parents, could do more than get a tattoo—she’d be allowed to get a physician’s help in committing suicide.

In the Netherlands, doctor-assisted suicide is technically against the law, but for the last decade, doctors who follow official guidelines have been assured that they won’t be prosecuted. Now the government wants to give unconditional approval to the practice. The draft legislation would make assisted suicide fully legal if done within the guidelines, and it would make it available to children as young as 12 years. If the parents object, no matter: A child who wants to end her life will get her wish.

The legislation is supposed to head off abuses by restricting the procedure to sick patients who request it, face unbearable suffering and have no chance of recovery. Note what is missing from that list: Neither the old policy nor this measure limits assisted suicide to people who have terminal illnesses. Even physical illness is not required: At least one woman asked for and got a lethal prescription from her doctor merely because she was distraught over the death of her two sons and the collapse of her marriage.

Even more disturbing is that the government has done little to enforce the guidelines. A 1991 survey of physicians who had assisted suicides found some 1,000 cases where lethal injections were carried out on patients—mostly comatose ones—who had not requested them. In some cases, even the family was not consulted. But such abuses have been greeted with indifference by law enforcement. Few physicians have been prosecuted for taking the law into their own hands, and even fewer have been punished.

Dr. Ben Crul, editor of the Royal Dutch Medical Journal, has assisted in suicides and defends the provision giving adolescents the right to end their lives over their parents’ objections. “I have been a doctor 20 years, and I’ve never seen a case in which the child and parents are not in agreement,” he says. In that case, why the need to let children ignore their parents’ wishes?

When the Netherlands decided to tolerate this form of killing, critics warned that it would foster a too-casual attitude toward death. So far, the critics seem to have been right.

It is, indeed, shocking. But is it unexpected? When society approves the taking of the lives of those unborn—and without their consent, is it strange that this same society should insist that lives can be taken with the consent of the individual? It’s all a matter of “rights.” One who denies God, who denies His Word and law, then is left to decide for himself what he will do with his life.

And make no mistake: the next inevitable step is the Hitler “solution.” Society will decide who has the right to live and who must die. Those who are a “burden” to society—the seriously ill, the handicapped, the aged—must be removed for the good of this society.

Stranger still: we hear in the USA that crime is now “way down.” And one of the reasons which has been given is that abortion has done away with most of the “unwanted children.” Had such children been born, they would likely have led a life of crime. Now we have “prevented” that.

Indeed, in the last days lawlessness shall abound. We see so many evidences of it.

The Vatican — and Indulgences

An old Rome reveals its true colors. Though much is made of an agreement between the Roman Catholics and many Lutherans, and though these insist that they have come to a common understanding on justification by faith, Rome has not changed its “spots.” Again, quoting from the Chicago Tribune, September 18, 1999, we are told the following:

The Vatican on Friday issued an updated manual on indulgences, offering new ways of winning forgiveness for Roman Catholics who courageously manifest their faith.

Vatican officials said that the new attention on indulgences—the forgiveness of sins through good works—shouldn’t harm recently improved relations with the Lutheran church, whose founder, Martin Luther, rebelled against abuses to granting indulgences.

The new manual, last updated in 1986, was published in Latin and will be translated into modern languages.

Last year, Pope John Paul II issued a decree upholding a 700-year-old tradition of celebrating church anniversary years by offering indulgences. The new manual incorporates the pope’s directives on indulgences, including advice that individuals can do penance by such simple acts as giving up smoking for a day. But it also stresses actions in which Catholics set good examples.

Besides helping people in need or depriving oneself of something spontaneously, indulgences can also be won by giving “public testimony of one’s faith in certain circumstances of daily life,” said another Vatican official….

Rome has not changed. But much of Protestantism has. Many appear willing and ready to return to the camp of Rome. Few seem even disturbed anymore by the salvation by works promoted in the Roman Catholic Church. Let us hold fast to that glorious testimony of Scripture that one is justified by faith and grace alone.

A Century of Change

As one millennium ends, so does a century. One cannot help but note that though a thousand years have passed in the millennium, it was the past hundred years that marked the far greater changes. The immense changes which took place the past hundred years ought to tell us something too. These changes are such that nothing in all of history equals it. The Grand Rapids Press, December 13, 1999, points to some of these.

The nation had one-fourth the people and none of them had ever flown the last time the calendar rolled over to double zeros. Highway accidents were rare. Married women stayed home. Television and computers were the stuff of fiction.

With the 20th century nearing an end, the Census Bureau has chronicled just how much America has changed in 100 years.

To begin, there are a lot more of us: more than 270 million Americans today, compared with 76 million in 1900.

But divorces have skyrocketed more dramatically than the population, up almost hundredfold, from 200,000 to 19.4 million. And the women who stay married aren’t staying home. In 1900 there were 800,000 wives in the work force. Now it’s around 34 million.

These and hundreds of other changes are detailed in the Census Bureau’s 1999 Statistical Abstract of the United States, being released Monday.

“Some of the numbers are truly amazing,” Census Director Kenneth Prewitt said.

…Transportation obviously took off, too.

It was Dec. 17, 1903, when the first sustained powered airplane took to the sky at Kitty Hawk, NC, traveling 120 feet in 12 seconds with a single passenger. In 1998, commercial airlines carried 614 million passengers over thousands of miles.

Television did not become widespread until the 1950s and computers only in the past few decades.

Does it tell us something? Such rapid scientific and medical developments within such a short time is additional reminder that the coming of the Lord is at hand. Man is using these changes and inventions in the service of sin. The child of God is tempted often to do the same. Yet he cannot help but note that God speaks also through these signs and reminds His people to look up from whence comes our deliverance. May God grant that we also do so. 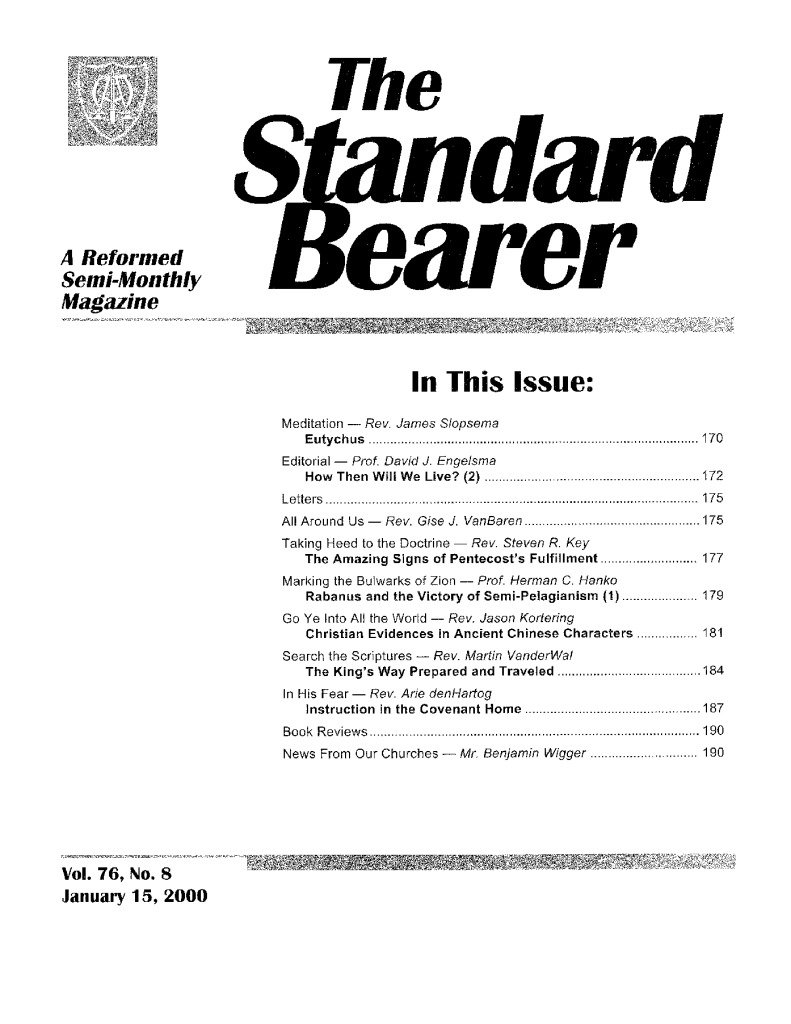