A number of articles in recent publications have called attention to a “sacred cow” which even in our circles is not often mentioned: sports as idolatry. One hears often, with regard to TV, “I have it only because of my interest in sports.” And who would dare condemn sports? Is it not the “innocent” programming which can be enjoyed by the Christian on TV? Is it not theengaging activity associated with school?

There appeared a quotation in the Christian News(Sept. 10, 1984), taken from U.S. News and World Report, containing some sobering thoughts:

“Sports-Crazy Americans” was the cover story of the August 13 U.S. News & World Report. The weekly said that “richer and with more leisure time than ever, the U.S. has truly become a sports-crazy nation. In every age group, in every region, in every walk of lie, a passion for athletics is blossoming—. . . .”

“On TV, viewers can watch events ranging from Monday-night football to Irish rugby or Thai boxing. ‘I know people who will line up three televisions on a Sunday afternoon in football season—two for network football games and one for whatever ESPN might be showing,’ says Prof. Charles Prebish of Pennsylvania State University.

“Replacing religion? Prebish, whose field is religious studies, has created controversy even at sports-minded Penn State by arguing that sports, for an increasing number of Americans, has ‘replaced traditional religion as a means of teaching ultimate reality.’

“Religion or not, sport’s appeal lies in the sense of freedom and release such activity offers from the monotony and pressures of everyday routine.”

U.S. News & World Report quotes Amherst Prof. Allen Guttmann, author of From Ritual to Record: The Nature of Modern Sport: “Taking part in athletics gives people a sense of control and mastery that might not be present in other parts of their lives.”

Too many are making sports an idol.

Another such article appeared in the G.R. Press, January 26, 1985, titled: “Do Competitive Sports Off end God?

Competitive sports are against Christian principles, undermine Christian values and distort our God-given urge to play, according to Shirl J. Hoffman, associate professor of physical education at the University of Pittsburgh.

“Competitive sports, as they are played in our culture, don’t exemplify Christian qualities,” said Hoffman at the Calvin College Mid-Day Series this week.

“Competitive sports extinguish the Christian signals. They push a form of winning at someone else’s expense. Thus, winners in our culture appear to be better.”

The Mid-Day series is held throughout this month at Calvin. Hoffman, who is also director of graduate studies at the Pittsburgh University, has studied the relationship between sports and Christianity for several years.

He believes sports, at least as this society plays them, are a distortion of the Christian message.

He noted that Christian athletes today “are describing their athletic endeavors as worship experiences.”

This is a perversion of the Gospel, a strange departure from what Jesus Christ taught.

“Sports is an experience, not a discipline,” he said. “Sports have become an increasingly important part of the Christian life.

“The trend, even on Christian campuses, is toward larger sports teams. Chapel services often finish a poor second to the big games. And this must make us think.”

With this emphasis on sports, Christians are taking themselves further from the basics of their religion.

Hoffman indicated that many college and professional athletes today are calling themselves Christians, but they actually aren’t exemplifying Christian values on the playing field.

“We are seeing many athletes today who dedicate their efforts to God,” he said. “It seems as if there no longer are any atheists in the dugouts.”

“The question, though, is, why, how and where are Christian athletes to play?”

Hoffman said he isn’t opposed to sports; quite the contrary. Sports are a form of play, and play, he said, is an important part of human existence.

“The urge to play is a divine gift, given for a divine purpose. God planted the desire to play and man created the variety of formats in which to express it.”

Sports for Christians, he added, should be an opportunity to exemplify Christian values.

But that isn’t happening, not in sports as we know and practice them.

“Competitive sports today give us a chance to demonstrate our own superiority over someone else. Winners are regarded as being better than losers.”

Importance is placed, at least in most organized sports, on the killer instinct, which enables athletes “to keep pressure on an opponent.”

Christ taught his followers to love, to value another’s life, to be humble.

“As Christians we supposedly learn to love our neighbors, but then when the whistle blows we have to be tough. We have to squash them. We have to win one for good old First Baptist.”

“Sports encourage dissension and rivalry, an attitude of ‘do it to them before they do it to you,'” he said.

Competitive sports devalue the importance, the sheer joy of play.

“We’re kidding ourselves to think the highest levels of sports image the ideals of faith. How can we support an activity in which injuries are almost guaranteed?”

Hoffman isn’t suggesting everyone turn in their shoulder pads, hang up their spikes and put their hockey sticks in moth balls.

“I’m calling us to re-think our ideas and approaches to sport,” he said. “We’ve got to design more flexible ways to express the emotional, playful side of our natures.”

Humans need to play, to take part in sports, but as Christians they must also think deeply about the way in which they do play.

“Sports, as we know them today, lack the form and substance, the right stuff to be God-ward gestures.”

“Christian athletes in the deep recesses of their minds know that sports, as we know them, aren’t acceptable.”

Sports too often these days come neatly packaged with religious justification. Teams get God working on their sides, he said.

In light of the above two reports, there is room for much sober reflection. How many of us place sports above society attendance? How much time is spent in the home watching sports—while family relationships suffer? Are sports even occupying our attention on Sunday afternoons (how many watched the recent “super-bowl”?)?

And in school sports, is not emphasis placed on the “winning”? It is true that we are reminded that the play is the important thing. Still, what losing team gains a following? And what kind of excitement is generated by a winning team? What admiration is directed to the player who manages to score the most points? Seldom, if ever, is that team member honored who scores no points. And, what activity is best attended: a championship basketball game—or a lecture on the Sovereignty of God? Why is “school spirit” enhanced and school support increased when there is a championship team at that school? What would most young men prefer in school: playing on the team—or singing in choir? What would a young lady prefer: being a cheerleader—or playing in the band?

I ask the questions for your careful reflection. The above articles can serve to enlighten that reflection.

The Christian News, Sept. 10, 1984, contained also several articles about gambling. One becomes conscious of this terrible evil especially here in Michigan where this is a “sport,” run and promoted by the state. There is a designed attempt to get many people to gamble. The Christian News writes:

After the lottery jackpot was won, the Globe said in an editorial that “In fact, when stripped of its gaudy trappings, the lottery can be seen as one of the biggest con games ever invented, one that uses its victims to promote it.”

Major newspapers throughout the nation recently published a series of articles from the Associated Press on gambling.

“In a pastime where numbers are keys to the dream, numbers also tell the story:

“Americans bet $44 billion last year in legal games—more than half as much as they spent on automobiles—averaging $200 for every adult and child in the country, according to an Associated Press survey of officials in all 50 states and the District of Columbia.”

“More and more people are treating gambling as an acceptable form of leisure activity,” said Duane Burke, president of the Public Gaming Research Institute, in Rockville, MD. Forty-six states now have some form of legal gambling. Bingo is legal in 43 states, as long as it is conducted by charitable or non-profit organizations. Some of the largest bingo games in the country are conducted on Indian reservations . . . .

The article concludes by emphasizing the sin of gambling. It is for many an addiction which, when one is away from the game, causes a “restlessness, irritability, chills, stomach pain, headaches and nausea.” The sin is the abuse of good gifts which God gives. It is a reliance upon “chance” to gain vast wealth without diligent labor. The poor, who so much desire to become rich, are most likely to gamble—though they can least afford to.

The evils of this sin will become increasingly evident in the future. Let every child of God beware this evil—and oppose it where he can in the area in which he lives. 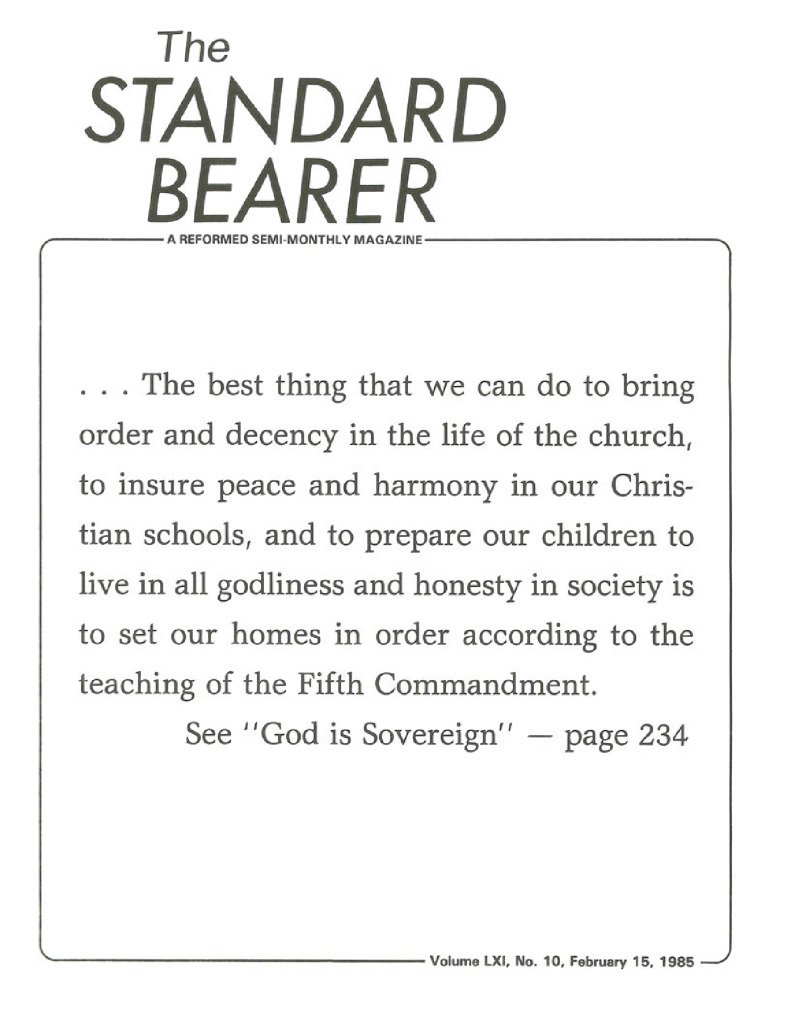