A SAMPLE OF CURRENT SEMINARY INSTRUCTION

In the January 6 issue of Lutheran News appeared a photographic copy of an article which had originally appeared in Lutherans-Alert a conservative ALC Lutheran publication. In it was recorded the reports of students being instructed in Seminaries of the denomination of what they are being taught. The quotations give evidence of the apostasy of current Lutheranism and show the present teachings of higher critics in the Seminaries of the nation. One wonders in how many Seminaries these views are being taught; and whether Reformed Seminaries are not also teaching these same ideas. Below follow scattered quotes from the article.

I (Student __________) sent to him (Professor _____________) to ask whether Satan really existed, and he said, “Well, let’s go to the Bible and I’ll see if I can explain it to you.” . . . He opened the Bible to the passage where Jesus . . . was led into the wilderness to be tempted. He said, “Well, we can’t really take this to mean what it says; it’s in symbols . . . . He really wasn’t led into the wilderness by the Spirit of God. He just went there by Himself because, you know, He was having trouble understanding whether He was God or man . . . . So He fasted up there and then He started thinking, and you know how you can talk to yourself. You can say, ‘Well, do I want to do it or don’t I want to do it?’, and that sort of thing when you’re wondering about some action that is about to be done in your life. So He said to Himself, ‘Well, am I the Son of God, or am I not the Son of God? He kind of had a mental battle; there would come a Bible verse that would say, ‘If you are the Son of God, throw yourself down from the top of the pinnacle of the synagogue and the angels will carry you up and won’t let you strike your foot on the ground.’ Then He would say something else; He would use another Bible passage to off-set that and say, ‘Well, that isn’t right.'”

. . . They talked about the Bible being a myth, especially the Pentateuch as having a lot of mythological references and myth involved . . . .

He (Professor _______) summarized (the idea of a myth) with a statement from C.H. Dodd, “A myth concerns not what happened; a myth concerns what happens.” This, he said, made it simple to understand what God had really said in the Pentateuch: “God is still creating and man is still falling. It’s what happens, not what happened. Adam, therefore, was simply the first man to fall and ever since then we’ve had one more fall of Adam as each person comes along and falls on his own; and so it’s possible for a person to be perfect as they are born, and then as they grow up they fall just like the first Adam.

“This mythological business,” (the professors) said, “could be compared to the Epic of Gilgamesh, which also speaks about a serpent, evils, the flood and other archeological things that happened . . . . I found (the student said) that it gave me a completely new attitude toward how the Bible was put together, an understanding of the Word of God. I found out that the Bible wasn’t such a significant writing after all; it was just another form that had been written down at the same time in history as many other myths, therefore, it just didn’t hold water! . . .

where the flood account is recorded; this idea came from the Mesopotamian people while the Jews were in Babylonian captivity . . . . The Tower of Babel was a story taken as a legend; there are many towers like this all over the place in the Mesopotamian area . . . .

Professor _____________, according to Student _____________, ascribed the awesome holiness of Isaiah’s description of God as coming from an Oriental conception that the King is able to cut off your head . . . . The Books of Jonah and Ruth were actually protests written to oppose the move of Ezra and Nehemiah to separate the Jewish community from the heathen population . . . . All Hebrew writings in the Bible received their final form after the exile. The story of the burning furnace with Shadrack, Meshack and Abednego was a folktale, along with the many others. If Daniel was written when he says it was, then the Bible would be magic . . . .

Professor ________ stated . . . “All prophecies of the Old Testament weren’t fulfilled; there is actually the possibility that the New Testament writers, in their zeal to see the Old Testament prophecies fulfilled in Jesus Christ were actually writing down these references to the Old Testament just to fulfill these Old Testament prophecies. We really can’t know that these were historically fulfilled; there is no way to prove it.” When Student ________ asked him, Why couldn’t these prophets prophecy 500 years in advance things that were going to happen, by the Spirit of God?”, the Professor replied, “If it is true that they could do this, they must have looked into their crystal balls or had a set of playing cards, or something; it would have been like a Gypsy; it would have been spiritualistic and mystic, and the Word of God condemns that!”

. . . The New Testament is not historically correct; it is not history, but theology completely influenced by later developments. Whole meanings of Christian proclamation come from the vindication of Jesus. We’re using the Gospels for a purpose they weren’t intended for . . . .

This is just a sampling of what happens when the Bible is rejected as the infallibly inspired Word of God. At last everything in Scripture is questioned. It is subjected to the superior and scrutinizing power of man’s reason. And it is rejected. The result is that even the Koran of the Mohammedans has the Word of God in it. Presumably the same is true of the writings of Confucius and Plato. But the people of God have no firm rock on which to base their hope.

A NEW FOUNDATION FOR THE FREE UNIVERSITY

In various periodicals especially from the Netherlands and Dutch immigrant groups comes news of a discussion underway in the Free University to change the basis. The idea is to change the Reformed basis of the University to a generally Christian basis. This means, evidently, (although the specific changes under discussion have not been published) that the purpose is to take from the basis of the University those elements which mark the school as standing in the Reformed branch of the Protestant and Calvinistic Reformation and give to it a basis which will attract people from every branch of the Reformation including Lutherans, Remonstrants and others. From the discussions which have appeared up to this point it seems as if the idea is also to strike down any differences between the Gereformeerde Kerken and the Hervormde Kerken and give the University a true ecumenical flavor. One wonders if those who are advocating these changes have their eyes also on Roman Catholics. Surely they too are “generally Christian.”

In a sense, there is something honest about all this. The recent liberal tendencies in Scriptural studies and theology among the members of the faculty of the Free University indicate that already the University has drifted into a “generally Christian” position in distinction from a Reformed position. The trouble is that this generally Christian position is, today, outright modernism. A change in the basis, however, would only be honest recognition of what has, in fact, actually happened.

But a change in the basis would be acknowledgment of the fact that the Free University is longer officiallyReformed. It has deliberately thrown aside its Reformed heritage and has abandoned all that it has stood for in the past. Any kind of return to sound Reformed instruction and any possibility of a “house-cleaning” in the University would be forever impossible.

In two recent articles in Newsweek present trends in college life were discussed. These articles had nothing to do with the hippies, yippies, college rebels, members of the free speech movement, or anything of this sort. These articles had to do with something far more insidious. The first article dealt with the growing influence of astrology among college students. Interest in astrology is not limited to college students, of course. But increasingly the followers of horoscopes are to be found among youth of this age group. It is estimated that there are some 10 million “hard-core adherents” with another 40 million who dabble in the stars in this country alone. Almost three-fourths of the nation’s daily newspapers carry horoscopes along with millions of magazines.

The idea of astrology is that the twelve signs of the zodiac determine the personality of those born under their influence. And that various movements of the stars and the planets affect life to such an extent that a study of these movements can be used to predict religious and secular affairs in the lives of individuals.

An interesting side-light was the prediction of the nation’s leading astrologer that Jackie Kennedy would never re-marry. When she did, the astrologer responded with the words: “The marriage is obscure. It is not a love marriage, but something else. Many factors are involved: the collapse of the Kennedy family; her own power of love, the fact that she was somewhat rejected in the United States and the shattering effect of the assassination of Robert Kennedy.”

At any rate, the interesting feature of it all is that as our country becomes more and more scientific and relies more and more on the authority of human reason and objective reality, so also appears this strange anomaly: the country becomes increasingly superstitious. Some explain the current interest in astrology as a “strong approach to God.” Others speak of it as a “decadent game played by a corrupt society.” One leading psychologist speaks of astrology as a refuge. “When concrete day-to-day life becomes increasingly harder, people turn to the occult forces. Once a horoscope has been cast, the inner world’ is settled for a while. Astrology takes the load off people. They are sharing their fate with outside forces.”

Astrology is idolatry. When men do not put their trust in the living God they turn to superstition and put their trust in foolish idols just as the heathen did. We have not outgrown the idolatry of Baal and Ashtaroth. Astrology is of Satan. It must be feared by God’s people as they value the salvation of their souls.

The other article in Newsweek had to do with the fact that “College students have gone to pot.” Evidences of its wide-spread use are plentiful. Many students make their living by selling marijuana. On many campuses, as high as 50% of the student body admit to having tried it. In some schools the kitchens of the dorms are used to prepare marijuana for use. The drug has become a unique Christmas present which college students send to each other with season’s greetings. While many college administrators acknowledge that the use of the drug has reached almost epidemic proportions, what is especially disconcerting is the fact that marijuana smoking has become socially acceptable in many parts of the country. There was a time not so long ago when use of drugs and dope was limited to a few who did their evil work in private. They were frowned on by the majority of people. This is rapidly changing. Drug use is becoming a status symbol. It is no longer condemned in colleges, in homes and among many social groups. It is becoming as acceptable as social drinking. How rapidly are the morals of this country breaking down. One is reminded of the words of God at the time of the building of the tower of Babel: “And now nothing will be restrained from them, which they have imagines to do,” Gen. 11:6. 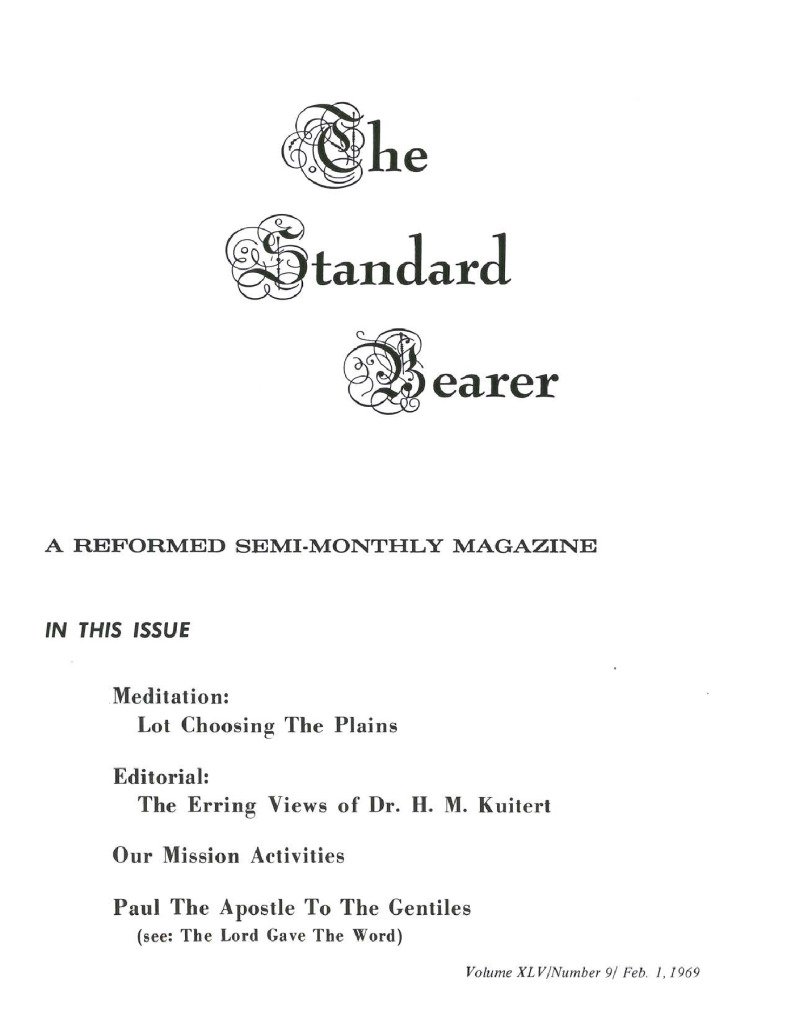