It is perhaps time to weigh in with some opinions and comments of our own concerning the Scripture reading of the astronauts of Apollo 8 in their recent moon flight. These astronauts, circling the moon on Christmas eve, startled the world by sending back a message from d space on Christmas eve which was chiefly a reading of Genesis 1:1-10; Reactions to this Scriptural reading has filled countless columns in the religious and secular press. Almost everyone was thrilled. Madalyn Murray, the professional and blasphemous atheist, registered a sour protest.

I have no intention of judging the legal aspects of Madalyn Murray’s case that the Scriptural reading was a violation of the First Amendment. Nor do I have any desire to judge the genuineness of the personal faith of these astronauts. Yet a little reflection might be a healthy thing lest we be carried away with it all.

There were many who were under the impression that this Scriptural reading was completely unrehearsed and unplanned. In this case the whole thing was a spontaneous outburst of praise to God which the sight of the earth from the spaceship orbiting the moon roused in these men. This was not the case. Here is the explanation given by Air Force Colonel Frank Borman at a Washington Press Conference shortly after the flight was over.

We were, of course, aware that we were going to have television on board the spacecraft . . . Having had television, we said we wanted to do something significant, because here we are around the moon on Christmas, and so on.

We consulted with friends. We thought among ourselves. We first thought perhaps it would be more of the ‘one world’ theme where we would tell everyone on earth that, gee whilliker, we are living on one earth. But then one of the suggestions was to read the first ten verses of the Bible; and that seemed so appropriate and so simple that we adopted that.

The suggestion to take Bibles along on the spaceship was first made by a representative of the Gideons. The passage chosen was one of several suggested by a minister with whom the astronauts conferred prior to their flight.

When, at the same press conference, Borman was asked concerning the religious significance of the flight, he responded:

The religious significance of the flight; at least personally to me, was the opportunity to view firsthand this mass of matter that perhaps will unfold some of the secrets as to how everything started.

There is an irony, here. If Genesis 1:1-10 does not tell us in no uncertain terms “how everything started” then this information is forever unattainable; and certainly not to be found on the moon. The fact of the matter is that apparently also the astronauts cling to the firm Wish of many scientists that further knowledge of the moon will enable men to make more accurate guesses as to the evolutionary origin of the earth and the universe. But if this is the purpose, evolution has already been accepted and Genesis 1 does not tell us anything about the origin of things. But then the question is: Why read it? Any other book will do as well. A vague and undefined reference to God is of no importance.

Whatever may have been in the minds and hearts of the astronauts, many back on “good earth” were not so modest. Perhaps Eric Sevareid, a news commentator on CBS, summed up the general feeling of most. His remark was: “What man imagines, he can do.” It was reminiscent of another CBS news commentator who covered the first attempt of this country to put a man in space. At the moment of lift-off, this commentator parodied a well-known Christmas carol which refers specifically to Christ. He sent the astronaut on his way with the words: “The hopes and fears of all the years are met in you today.” At the time it was like a cold hand on my soul. He was probably more correct than even he realized.

Sevareid’s comment came uncomfortably close to God’s words of judgment and wrath upon a wicked world at the time of Babel: “And this they begin to do: and now nothing will be restrained from them, which they have imagined to do.” Genesis 11:6.

And this is the point. Man is building once again his Babel. His Babel is built with the rock of scientific achievement held together by the mortar of man’s atheistic pursuit of an earthly kingdom. His achievements are in the service of sin. Nothing will be restrained from them which they have imagined to do.

There were few ministers who did not make the moon-flight the subject of a Sunday morning sermon. Most of these sermons dealt with the glories of the flight and the marvelous panorama of human accomplishment held out before man by the success of it all. Some dealt with the many theological problems which the flight once again raised. “(The flight) might open up new dimensions in conceiving of God, of dealing with the enhanced mystery.” “(The flight) may reinforce the idea that man may not be the most important thing in creation. Say that out there we find persons superior to us, as we consider ourselves superior to dogs.”

And this was, at bottom, the problem. Is there life on other planets? And if there is, what are we to do about it?

In the scientific world at least it is now quite commonly accepted that there has got to be life on other planets. If not in our solar system, then surely in our galaxy. And if not in our galaxy, then surely in some other of the countless galaxies of space. But again there is a basic presupposition. That presupposition is the evolutionary origin of all things. The argument is not difficult to follow and is basically this. If life evolved on this planet, there is no reason at all why life could not also evolve on another planet. But the key word is “Evolve.”

It is worthy of note therefore that a Jesuit theologian has the courage to challenge these assertions on the basis of Scripture. According to Time, Paul Curtin said:

There is a considerable amount of truth in this statement. Surely it is true that, as far as we know from God’s revelation, there is no other life on other planets anywhere in the universe. And to assert that there is creates insuperable problems as far as God’s revelation to us is concerned. Scripture teaches emphatically that all things in heaven and on earth are to be united in Christ in the new creation. This is possible because God reconciled all things to Himself in the cross of Christ. Supposing then that there is intelligent life on another planet; and supposing that there has been no fall into sin among this race; at least this segment of the creation of God cannot be united into Christ because it has never fallen. But problems arise also if we speculate that they too have fallen. They either perish forever or Christ went there after He left our planet to be born in that race and atone for sin there.

The conclusion has got to be that the only revelation we know is the revelation of God Who through Christ accomplishes His purpose among men here on this earth.

Malcolm Muggeridge, a well-known British writer, had some interesting things to say about the Assembly of the World Council of Churches in Uppsala last year.

At Uppsala, as one clearly saw, they were able to agree about almost everything because they believed almost nothing.

They reminded me of a pub turn-out in my youth, with 10 or a dozen drunks holding onto one another, swaying to and fro, but managing to remain upright. Alone they would infallibly have fallen into the gutter.

It was all tremendously reminiscent of the United Nations, that tragically absurd assembly-stony faces between earphones, paper circulating in prodigious quantities (the Swedish government allotted 10 tons, which got used up in the first two days), oratory to match, interminable discussions about the precise wording of statements of belief and purpose which few would read and none heed, a well-equipped but little-used press room, documents of no conceivable importance or interest to anyone urgently rushed out to choke the pigeonholes of absent journalists.

If ever in human history there was a non-event, this was it.

I cannot see how, apart from the desultory use of the cross as a symbol and the garb of some of the delegates, anyone could possibly have known that the occasion had anything to do with the Christian religion.

Institutional Christianity is quietly but inexorably extinguishing itself.

In the February 8, 1969 New York Times Walter Sullivan wrote an article in which he spoke of two University of Georgia geologists who had “confirmed” the fact that the eastern coast of South America and the Western coast of Africa were once joined. The confirmation was based upon the fact that the geological layers on the two coasts of the continents match perfectly in several areas. All this was supposed to be proof of a theory of continental drift.

While the geologists find in this additional proof of an earth which is hundreds of millions of years old, I recall vividly that over thirty years ago this was already called to our attention in Catechism class as evidence of the universal flood which God sent upon the earth in the days of Noah.

In the Grand Rapids Press of February 10, 1969, an editorial was written entitled “A Look at Parochiaid.” The editorial considered the question of Parochiaid chiefly from the viewpoint of Constitutional law. But it also bade some interesting comments concerning state aid and state control of schools. We quote a few paragraphs.

A campaign handbook gotten up by the Michigan Association of Nonpublic Schools sets as this year’s goal the winning of state funds equal to one-half of the per-pupil money allocated to public schools. The ultimate goal apparently is state aid for nonpublic schools equal to that which is being given the public schools.

George Romney declared his opposition to nonpublic schools as he left office . . . .

Romney feared that state aid would bring state control of non-public schools. It might not happen right away; but no legislative body can appropriate public funds to private schools or any other private organization without insisting, for the public’s protection, that it have an important voice in determining how the funds are spent.

Contrary to popular belief, perhaps, not all nonpublic school people indorse the campaign for public funds. Some are concerned lest their schools lose their identity and find themselves compelled to accept state supervision.

This is also our fear. And it is not at all ungrounded. 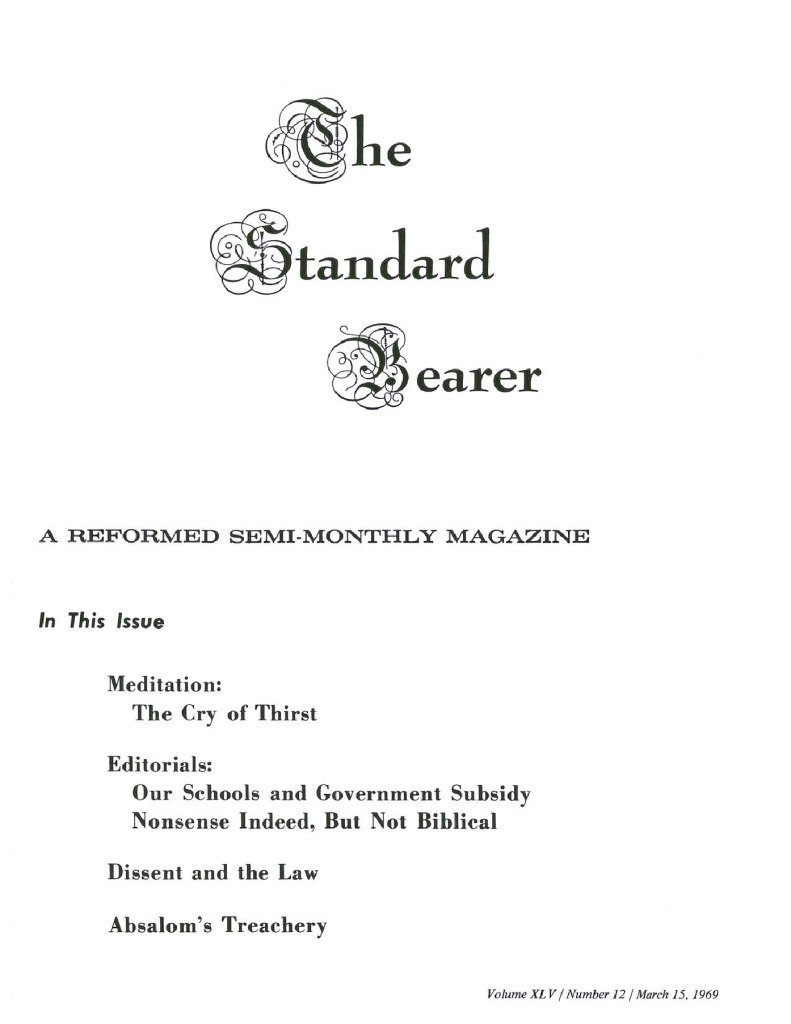