Robert D. Decker is professor of New Testament and Practical Theology in the Protestant Reformed Seminary.

Something “big” happened in the Grand Rapids area late last summer, something “big” and something “sad.” It was an evangelistic crusade called, “Alive, ’85.” Christianity Today in its November 8, 1985 issue reports: “Grand Rapids, Michigan, is no modern day Sodom or Gomorrah. The city of 185,000 is the home of such highly respected evangelical institutions as Calvin College, Calvin Theological Seminary, and Zondervan Publishing Company, a major evangelical publisher.

“A haven for Reformed Christianity, Grand Rapids seems an unlikely target for a major evangelistic crusade, especially one conducted by an Episcopal clergyman. Yet that is what happened with Alive ’85, a three-city (Grand Rapids, Holland, Grand Haven, R.D.D.), 15-day crusade, the largest event of its kind in Western Michigan.

“Some 60,000 people attended the meetings . . . . Hundreds had to be turned away in Grand Rapids. In all, nearly 1,700 people dedicated or rededicated their lives to Christ. Of these, some 500 were not church members.”

Yes, it was big! Some 60,000 people in attendance, hundreds had to be turned away, “the largest event of its kind in western Michigan.” It was widely advertised in the media and by means of billboards and tracts and leaflets. The Grand Rapids Pressreported on it, as did local TV and radio stations. Nearly 150 of the 600 churches invited to participate accepted the invitation. It was a big event.

“The crowds came to hear a little-known, British-born Episcopal evangelist named John Guest. The 49-year-old clergyman committed his life to Christ in 1954 at a Billy Graham Crusade in London. He joined the Church of England and went on to become an itinerant evangelist as a singer in a Christian rock band.

“Evangelism is a driving force in Guest’s ministry. Fifteen years ago he ran the youth division of Billy Graham’s New York City crusade. In 1968, he founded an evangelistic campus ministry Coalition for Christian Outreach. A year later he led a major evangelistic outreach on the beaches of Grand Haven, thus introducing himself to western Michigan. In recent years he has worked with evangelists Leighton Ford and Luis Palau.

“For the last 14 years, Guest has served as rector at Saint Stephen’s Episcopal Church in the Pittsburgh, Pennsylvania suburb of Sewickley. During his pastorate, church attendance there has grown from 250 to about 1,200.” (Christianity Today, Nov. 8, 1985)

Why the crusade? Lee Huizenga, vice-chairman of Alive ’85 said, ‘”We saw a lot of apathy [in the churches]. There was virtually no evangelistic outreach going on in the area.” Clare DeGraff, organizer of Alive ’85, said, “Churches in this area are very conservative theologically, but they’ve also been very lukewarm, and we felt it was time to bring renewal.” (Christianity Today)

Why do we term this “big” event “sad”? For a number of reasons. Apathy and lukewarmness are serious, dangerous, destructive sins. (Cf. Revelation 3:16.) There is constant need for renewal in God’s church. Churches who stand in the Reformed tradition understand that reformation is ongoing. The church must always be reformed and reforming according to Scripture and the Confessions. Aside from the question as to whether God does this reforming by means of “evangelistic crusades,” it’s sad that over 100 of the nearly 150 participating churches were churches bearing the name Reformed. (For these statistics cf. Christianity Today and the Oct. 28, 1985 issue of The Banner.) The theology and, therefore, the preaching of John Guest are shot through with Arminianism.Christianity Today reports: “When it comes to preaching the gospel, Guest exhibits his single-mindedness. During the Michigan crusade, the urbane Episcopalian at times sounded like a fundamentalist firebrand, ‘If you die before you give your life to Christ,’ he proclaimed, ‘after you’ve been in hell three seconds, you’d give anything for three seconds back on earth to give your life to Christ.”‘ This is not Reformed language. The Banner quotes Guest: “Some of you are going to make a decision tonight that could change your life, help you change your church, and help your church change the world. That’s the order [in which] it has to happen,’ he said. Guest said that God’s sovereignty goes hand-in-hand with a person’s choice for Christ. ‘The same Paul,’ he said, ‘who taught that God, by his own sovereign election and love, chooses us, also pleaded with his audience to respond to Jesus. That God is sovereign does not diminish that we are held accountable and responsible for our decisions. Are you the one that God is calling to himself tonight? It’s to you I appeal and beseech in the name of Jesus. Come and give your life to him. Do not leave this place without surrendering your life to him.'” This is Arminian language. Each of the services of the crusade was concluded with an altar call. That’s sad!

Such language is a far cry from what the Bible and our Reformed Confessions teach. When Jesus preached sovereign election and reprobation (cf. John 6:37, 44, 65; read the entire chapter) many of his disciples said, “This is an hard saying; who can hear it?” (verse 60) and they “walked no more with him” (verse 66). The Apostle Paul preached to the Romans, “So then it is not of him that willeth, nor of him that runneth, but of God that showeth mercy” (Romans 9:16). To all those who object to this precious truth, declaring that there is unrighteousness with God, and babbling about free will, gospel offers, and making decisions to surrender one’s life to Jesus, the Apostle has this to say: “Nay but, O man, who art thou that repliest against God? Shall the thing formed say to him that formed it, Why hast thou made me thus?” (Romans 9:20 ff.). The Scriptures teach that sinners dead in trespasses and sins are made alive in Christ and saved by grace through faith, God’s gift (Ephesians 2:1-10). The Apostle came with no offers, no pleas for decisions to the Corinthians. Paul, in the confidence that “all things are of God,” came with the imperative of the gospel: “be ye reconciled to God” (cf. II Corinthians 5:18-21). That venerable part of the Three Forms of Unity, the Canons of Dordt, accurately reflects the Biblical truth when it states, “Moreover, the promise of the gospel is, that whosoever believeth in Christ crucified, shall not perish, but have everlasting life. This promise, together with the command to repent and believe, ought to be declared and published to all nations, and to all persons promiscuously and without distinction, to whom God out of his good pleasure sends the gospel” (Canons, II, Article 5). That over 100 churches in the Reformed tradition felt the need to get help from an Episcopal, Arminian clergyman to spark renewal is very sad indeed!

That the churches, also the Protestant Reformed Churches, need to be reformed and always reforming is true. Of this there can be no doubt whatsoever. What does the church need to be and remain Reformed? The church does not need higher critics in its seminaries, women in ecclesiastical office, revised creeds or new creeds. The church does not need Arminianism or evangelistic crusades. The church needs “faithful men who are able to teach others” in its seminaries. The church must pray for grace to be faithful to the rich and wonderful heritage of the Scriptures as set forth in the Reformed Confessions. The church needs to pray for daily repentance and faith in the hearts of God’s people. The church, if it is to be and remain true to the Scriptures, needs preachers who really preach. It needs preachers who are convinced that the Bible is God’s inspired and infallible Word. Preachers, the church needs, who faithfully expound the Word of God from Lord’s Day to Lord’s Day. Preaching is the great need! Preaching that without shame proclaims the truth of Scripture over against every lie, false doctrine, and ungodly practice in the lives of God’s people. And, preachers too are needed to be sent to proclaim the gospel to the nations.

The church also needs elders to rule her in the name of Jesus Christ. The church needs discipline in order that she may be obedient to God’s will both in doctrine and in life. The sacraments must be administered according to the institution of Christ. Elders who rule in Christ’s name must see to it that the Word is faithfully preached, the sacraments administered, and that God’s people know, love, and live the truth of Scripture.

Without this there will never be reformation. Our prayer for the blood-bought church of Jesus Christ is that God will give her preachers who really preach and elders who will rule in the name of Christ keeping the church pure in doctrine and obedient in life. 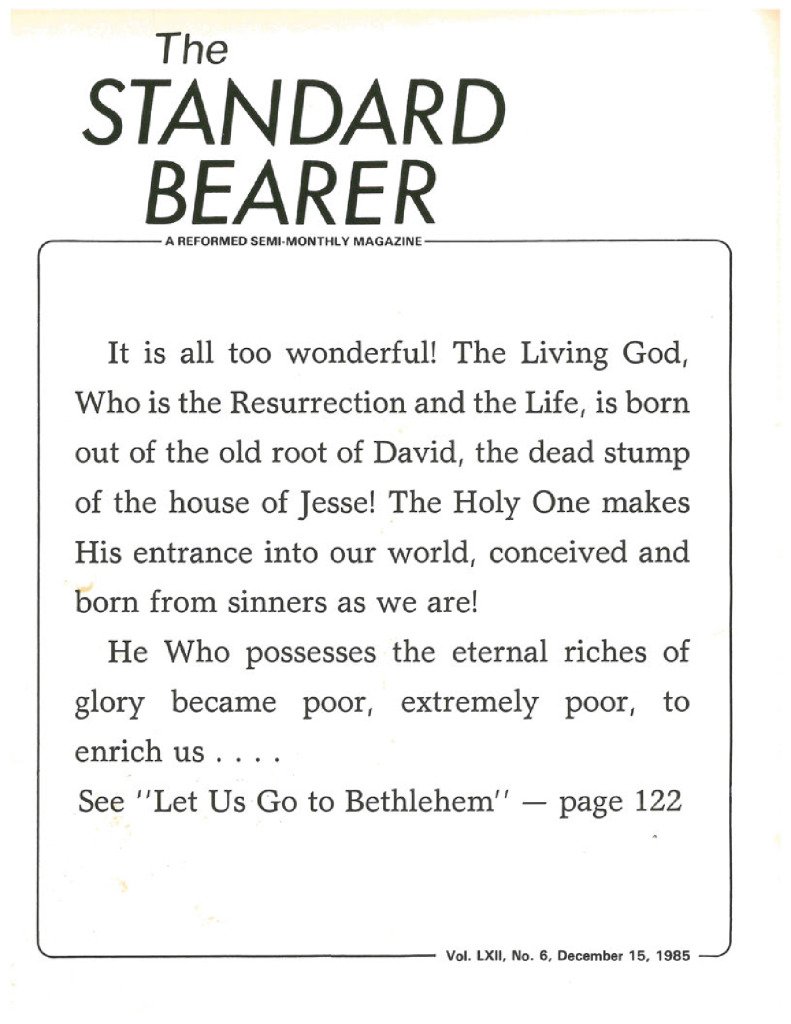