Jacob, whose name Israel means Prince of God, at last came to stand before Pharaoh, a prince of this world. Jacob stands there as a stranger in a strange land. Pharaoh sits on his throne as the highest power in his own native land. Jacob was there with Pharaoh’s approval and in his good pleasure. Pharaoh, though he does not know it, was king in Egypt in God’s good pleasure and according to His sovereign counsel. And although Pharaoh thinks that he is being generous and gracious to Jacob and his family, it is God Who is using him in His grace to Jacob and the church of God which he represented in that day.

This Pharaoh reveals nothing to indicate that he was a believer and thus a child of God. He appreciated greatly the interpretation of his dreams which God gave him through Joseph; but his dealing with Joseph and Jacob and the whole family revolved around the benefits his Kingdom enjoyed, not around Him Whom Joseph represented and the fact that Jacob’s family represented the church of that day.

Pharaoh never figured with the fertility that God would give Jacob’s descendants in the land of Goshen, nor with God’s counsel and covenant. Little did he realize what a later Pharaoh saw, namely, that the Israelites would grow to be a people that would be a definite threat to the Egyptians: threatening to outnumber them, remaining a distinct people with no intention of intermarrying, and worshipping a God Who condemned all the idolatry of Egypt. We may believe that he did not expect Jacob’s descendants to remain in his land after the famine was over, and certainly not for four hundred years! How could he ever imagine that they would leave in a way that left Egypt ravished and ruined by ten terrible plagues and the whole army and its chariots wiped out in the Red Sea?

Pharaoh had reason to believe that the stay would be only for the duration of the famine. When Joseph brought his five brothers before Pharaoh they stated quite clearly in Genesis 47:4, “For to sojourn in the land are we come; for thy servants have no pasture for the flocks; for the famine is sore in the land.” Note that they speak of sojourning, not settling permanently in the land. It is true that God had told Abraham that his descendants would be strangers in a land that was not theirs (Genesis 15:13). However, we have no way of knowing whether Abraham handed this truth down to Isaac and whether Isaac made it known to Jacob. Even if this truth had been handed down from generation to generation, it is questionable whether they understood this to mean a sojourn in Egypt or some other country neighboring on Canaan. A land that was not their own could to them have meant Canaan. It was not yet their own in the sense that they did not possess it. It was theirs in that it was promised to them. But there was room to believe that it meant that it would be four hundred years before they would possess it. What is more, God had told Jacob before he left the land of Canaan, “I will go down with thee into Egypt; and I will surely bring thee up again” (Genesis 46:4). Had they been told, and had they remembered God’s word to Abraham, they could have ruled Egypt out on the basis of this word of God. The brothers who told Pharaoh that they had come to sojourn in the land because of the famine firmly expected to leave the land after a few years. No one saw this sojourn in Egypt as a fulfillment of God’s word to Abraham of a four hundred year stay in a land that was not their own.

But, as we stated, Jacob the Prince of God came at last to stand before Pharaoh, a prince of this world. And here before the king of Egypt Jacob is not ashamed of the gospel and openly confesses his faith. Pharaoh asked Jacob how old he was. And Jacob responded to the effect that he was a pilgrim here on this earth, and that his pilgrimage had been an evil one and relatively short.

Pharaoh’s reason for asking this question would seem to be rooted in Jacob’s appearance. He was at the time one hundred and thirty years old; and only a few months before this his sons had said to Joseph—not knowing that he was aware of this—that their father was “an old man.” He did live another seventeen years, but undoubtedly what he stated to Pharaoh revealed his great age. He told Pharaoh that the days of his years were few and evil. By evil he refers to the many troubles and struggles which he experienced. He knew much trouble. His life was not a path of roses but a very rough and hard way. It was for him an uphill climb most of the way. Then, too, he came crippled before Pharaoh because of that hip that God had touched years before at Penuel, when he wrestled with the angel. And all that grief of those last ten to fifteen years because of Joseph’s “death,” which hurt him deeply, also showed on his face. Had he not said that he would go down to his grave unto his son mourning? (Genesis 37:35)

In comparison we may note that Isaac his father lived to be 180 years, and thus 33 years more than Jacob. Abraham we learn from Genesis 25:8 “gave up the ghost, and died in a good old age, an old man, and full of years.” Of Terah, Jacob’s great grandfather, and the father of Abraham it is recorded that he died when he was 205 years of age. The number of the days of a man’s years was rapidly being lessened, and men who lived to be 120 years old when they died, like Moses, were the exception. In fact it is Moses who wrote inPsalm 90 that our days are threescore and ten, and if by reason of strength fourscore. Jacob then, even though his years were not as many as those of his fathers, still lived 67 years more than the strong of whom Moses spoke.

Do we get here a suggestion of complaint on Jacob’s part? He speaks gloomy language. Is he speaking of evil days and of lesser days as one who is sour on life and bitter against God? Had he expected to equal the days and years of his fathers? It is not at all impossible that such is the case, even though in the same breath he calls his life a pilgrimage, which indicates that by faith he looks to the city which hath foundations. It is not at all unusual for a believer while confessing his faith to reveal his old and evil nature. Paul writes in Romans 7:21, “I find then a law, that, when I would do good, evil is present with me.”

And look once at yourself. Give yourself an honest and thorough self-examination. In our prayers, which we begin with sincere praise and adoration to God, very often and so easily we express complaints about what God has done. I do not mean a plaintive cry. But how often is our plaintive cry not a complaining cry? In the midst of great discomfort and misery, facing terminal afflictions for self or a loved one, we in our plaintive cries express great dissatisfaction with God’s way with us. How often do we not reveal that we think that God’s way is all wrong, and we sit in judgment over Him? I

How hard it is in miseries, losses, and afflictions to say with the psalmist what he said in the midst of his afflictions as recorded in Psalm 119:65, 66, “Thou hast dealt well with Thy servant, O Lord, according unto Thy word. Teach me good judgment and knowledge; for I have believed Thy commandments.” How much we need that good judgment and knowledge so that we too judge Him to have dealt well with us. How difficult to add, as he does, a few verses later, “Thou art good and doest good.” And then in the next section he declares, “I know, O Lord, that Thy judgments are right, and that Thou in faithfulness hast afflicted me.”

Can you even get those words on your lips when you hurt all over, have overwhelming losses, stand face to face with death itself for yourself or a loved one? How much harder to speak these words from the heart. We run to God in prayer, and that is good. It is evil, a sin, to run to anyone else in our needs and distresses. But when we would do good evil is present. Deny that and you only prove the point.

Ah, there is the explanation. When Jacob confessed to be a pilgrim he was looking at the things which are not seen with the natural eye, but can be seen only with the eye of faith. But he quickly took his eye off these things and, looking at the things which could be seen in his natural life with his natural eye, he spoke of days that were evil, and things which were temporal. Of course! The natural eye can only see that curse here on this earth because of our sin in Adam. It can only see temporal things, for the curse brings an end to all things in this present world. The eye of faith can see Christ and His cross and the new Jerusalem not only but also that love of God in Christ that works all things together for good to those that love God.

One would think that Jacob, having learned how it all worked out so well that Joseph is not only very much alive but that through him God was keeping His church alive, would speak otherwise than he did. But the sad part about it all, the thing that ought to hurt us and ought to teach and rebuke us, is that Jacob missed such a golden opportunity to witness before the world.

Oh, he began by faith. He did well to speak of being a pilgrim, but he did not magnify God before godless Pharaoh. He did not say to Pharaoh, “The days of my years were fewer than those of my fathers; but God was good to me, Pharaoh. I was evil so often during them, but God forgave in His mercy, blessed me with all these covenant children, made me rich spiritually, and in it all was preparing me for indescribable blessedness. His counsel did guide me so that afterward I might be received to glory. Praises be to Him.”

And you, when the world sees you on your bed of pain in the hospital, visits you in your home or the funeral-parlor—what do they hear you say? Do they receive a witness and testimony from you? Is God praised by you before them? Or are you just another sufferer, another victim of evil in this sin-cursed world who, to the world, appears to be one who only sees the temporal?

Jesus said it, “Let your light so shine before men, that they may see your good works, and glorify your Father Which is in heaven” (Matthew 5:16). Do that! By all means do that! 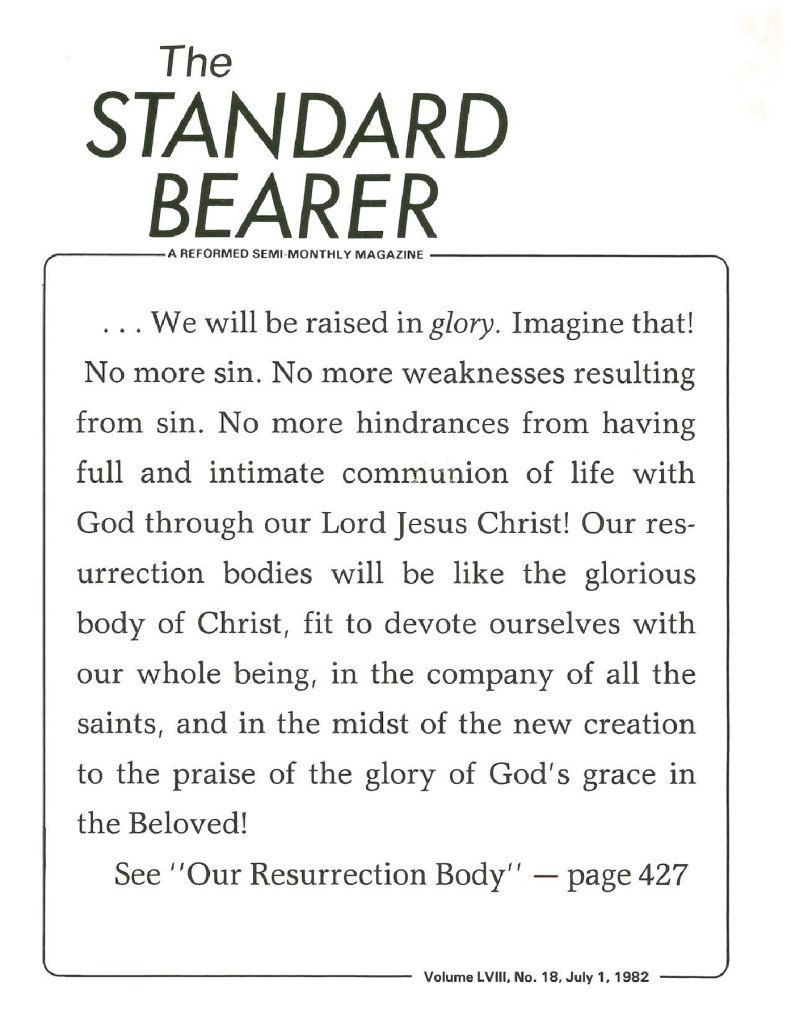