The Hymn Question Before Our Synod

The Hymn Question Before Our Synod

The Synod of the Protestant Reformed Churches, 1961, is again a matter of history.

After a prayer service, on Tuesday evening, June 6, in the First Protestant Reformed Church of Grand Rapids, Mich., which was conducted by the Rev. C. Hanko, the Synod opened its sessions the following morning, June 7. A “moderamen” was chosen consisting of the Rev. M. Schipper, president, the Rev. H.H. Kuiper, vice president, the Rev. J.A. Keys, clerk, and the Rev. H. Veldman, assistant clerk. Under the very able leadership of the chairman, the Rev. M. Schipper, the business of Synod was conducted in an orderly way and on Friday, June 16, the Synod was closed with prayer and thanksgiving.

During the entire Synod it was very evident that the Lord our God heard our prayers and His blessing rested upon us. To be sure, not all thought and expressed their opinion in the same way on the different matters that’ were brought to the attention of Synod. But the love of God in Christ and the love of the brethren reigned in our hearts. Personally, I am of the opinion that the Synod of 1961 was one of the most harmonious synods we ever had.

It is not my purpose to discuss, in this editorial the various matters that were decided. Perhaps, I may do so in some future article, the Lord willing, after the Acts of Synod have been published, which, of course, will be available to all our people. But there is one item, that was tabled by Synod for the very purpose that the matter involved may be publicly discussed by all our people before a final decision is taken. That is the matter of the “hymn question.” This question I will now introduce in the hope that as many as possible will express their opinion pro and con and will take part in the discussion.

The matter of the hymn question first of all concerns a proposed change in Art. 69 of the Church Order which reads as follows:

“In the churches only the 150 Psalms of David., the Ten Commandments, the Lord’s Prayer, the Twelve Articles of Faith, the Song of Mary, Zacharias, and Simeon, the morning and evening Hymns, and the Hymn of Prayer before the service shall be sung.”

This matter was brought to Synod, first of all, in 1959 when a committee was appointed to study the matter of the revision of article 69 especially with a view to the hymn question. This committee reported to Synod in 1960. Then, at the Synod of 1960, a motion was made and carried to refer this matter back to the Study Committee to furnish the grounds and report to the next Synod.

This the committee did, and they reported as follows:

“Our committee originally appointed to study the proposed change of Article 69 of the. Church Order was given the following mandate by the Synod of 1960: ‘A motion is made to refer this matter back to the Study Committee to furnish grounds, and report to the next Synod. Carried.’ Art. 55.

“Our original report can be found in Supplement XXIV of the Acts of Synod of 1960 and we will not return to it here.

“I. We would however, propose one change in the proposed revision we advised last year. That change is to make the word ‘hymns’ to read ‘songs.’ Our reasons for this change are:

“1. There is some misunderstanding regarding the use of the word ‘hymns.’ Although the word can, no doubt, be used for versification of Scripture, it has come to mean much more in our day. And although the word is clearly defined in the article itself, we wish to leave no room for misinterpretation.

“2. There is, by the change of this word, no fundamental change in the article itself.

“II. With respect to the grounds we were asked to draw up in support of this change of Article 69, we advise Synod to adopt the following:

“1. It is the express purpose of this revision to keep from our worship services the hymns commonly in use in other churches which are not faithful versifications of Scripture. Our reasons for this can be found under ‘B’ of our original report, and there is no need to quote them here.

“2. The grounds for including versification of Scripture are the following:

“a) We are already singing them in our churches contrary to the original Article 69. Examples: ‘Praise God from whom all blessings flow’; ‘The Lord’s Prayer.’

“b) There are other parts of Scripture which are written in poetry and which are sluitable for versification. Examples: 1) The song of Moses. 2) Habakkuk. 3) The songs of Mary and Zacharias. 4) Parts of I Corinthians 15. 5) Parts of Romans 8. 6) Parts of the book of Revelation.

“c) The Psalms speak of the revelation of God from the viewpoint of the types and shadows of the Old Dispensation. The New Testament Scriptures, written after the fulfillment of the promise, speak more clearly and directly of that promise since the shadows fell away. While it is not impossible to interpret the Psalms in the light of the New Dispensation, there cannot possibly be anything wrong with using other parts of Scripture including the New Testament Scriptures as a basis for the versifications to be used in the church.

“d) It is evidently a legitimate occupation of the church organism to provide the church here on earth with songs to sing even in its worship services, This task ought not to be discouraged by limitations binding the church to the Psalms.

“3. Our grounds for the phrase ‘in each case the general synod being the judge‘ are:

“a) No individual congregation should introduce additional songs by itself.

“b) The Synod must have the authority to determine the worth of any particular song.

“c. This will safe-guard the introduction of unsavory songs into the church.

“4. Ai far as the original redaction of Article 69 is concerned, we point Synod to the following:

“a) The ‘150 Psalms of David’ evidently refers to the Dutch Psalm Book.

“b) The other songs mentioned are not available to the English-speaking church.

“c) We have not adhered to the literal reading of Article 69 since the beginning of our existence as Protestant Reformed Churches.

“5. The Psalms of David are mentioned specifically in the proposed revision of this article because the emphasis should fall on them in all our singing.

“6. Finally, we hope that the clarification of this article through the proposed revision will:

“a) Keep our churches and our people from bringing into the church the hymns in common use in the American church world.

“b) Inspire and encourage talented people within our fellowship to add to the songs we already have.

“May God’s richest blessing rest upon your Synod, and may you be guided by the Spirit of truth in all your decisions.”

On the advice of the Committee of Pre-advice this report was virtually entirely adopted. The only exception is that Synod preferred to retain the term “hymn” instead of the word “songs” as the original committee advised.

But a rather long discussion ensued when the original motion proposed by the committee to the Synod of 1960 was being debated. This proposed motion may be found in Article 85 of the Acts of Synod, 1960. It reads as follows: “A motion is made to adopt the advice to change Article 69 of the Church Order to read: ‘In the churches only the 150 Psalms of David shall be sung, as also such Hymns which are faithful versifications of the Holy Scriptures, in each case the General Synod being the judge, on the basis of the grounds proposed by the committee’.”

Now, one would think that if the grounds which the committee proposed to substantiate the motion were valid and true and were adopted by Synod, as they were, the motion must necessarily be adopted. If not, the Synod merely adopted grounds without a motion. Yet, this was not the case: while the grounds were adopted as valid and true, more than one argued against the motion proper. And the grounds on which they argued certainly, could not possibly be against the motion as such. How could one possibly be against the singing of songs in the worship of the church which are: 1. faithful versifications of Scripture, and 2. the correctness and validity of which are to be judged by the Synod of the Protestant Reformed Churches? This is, evidently, impossible. But the grounds, as far as I remember, were twofold, namely, 1. There is sufficient material in the 150 Psalms of David, so that there is no need of other songs or hymns, and, 2. The peace of the churches: if hymns should be introduced by our Synod even though they were faithful versifications of Holy Scripture, and although in each case the approval of Synod would be required, the churches and the people would, nevertheless, be disturbed and afraid that heresy would be introduced into our Protestant Reformed Churches.

We hope to continue this in the next Standard Bearer, D.V. 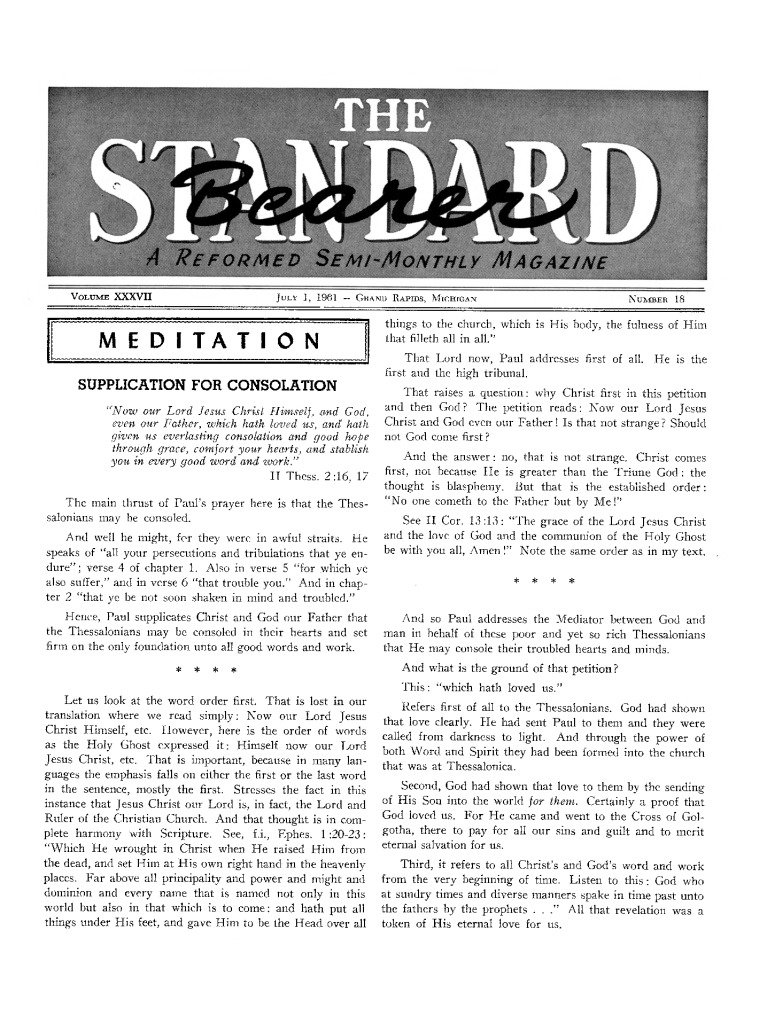