In a former article of this rubric was quoted a minister of the Christian Reformed Church who pointed out that failure of his denomination to join the W.C.C. was equivalent to “fiddling while Rome burns.” The decision of the last Synod of the Christian Reformed Church indicates that this denomination intends for the time being to continue “fiddling.”

I consider it commendable that in this day of much false ecumenism that our “mother” denomination is ready yet to state that they MAY NOT join the W.C.C. as it is presently constituted. At the same time time, the decision as taken, and the strong opposition to this decision, gives real reason for grave concern with respect to the future for that denomination. There are obviously many in the denomination who advocate joining the W.C.C. And those who oppose such union are not ready to take a firm stand against such union — possibly because of a fear of offending the proponents of the W.C.C. in the C.R.C.; possibly too because of a fear of being labeled “anti-ecumenical.”

I have in my possession the minority report of the advisory committee of the C.R.C. Synod. This in turn favorably reacts to a minority report which was presented to the Synod by a committee appointed last year to consider this matter of the possibility of Reformed churches joining the W.C.C. This report the Synod did NOT adopt — but it does reflect the trends within the C.R.C. toward W.C.C. affiliation. The minority advisory committee recommended the adoption of the recommendations of the minority study committee. These are as follows:

a. Synod recognizes, on the basis of Scripture, that the Church of Jesus Christ is one, and that this unity ought to come to visible expression as a witness to Christ.

b. Synod reaffirms the position adopted by the Synod of l944, that the Christian Reformed Church bears a responsibility to all other Christian Churches “to gain and to keep our ecclesiastical brethren in the measure in which it is possible for us to do so.” (Resolution 8, Acts 1944, p. 359)

c. Synod judges that the basis, nature, and purpose of the World Council of Churches, as defined by its Constitution, are such as to permit a Reformed Church to seek membership in it.

These constitutional provisions do not violate the requirements of Scripture, no? are they in conflict with the Reformed Confessions.

e. Synod urges the Gereformeerde Kerken to give due consideration, before applying for membership in the World Council of Churches to thefollowingmatters:

1) The preservation of their own internal unity;

2) The question whether their total witness to the world, singly or in conjunction with other Reformed Churches, will be aided or impeded by World Council membership:

3) The implications of the actual functioning of the World Council, judged by the best information available.

f. Synod communicates these decisions and the text of this report to the Gereformeerde Kerken as its response to their request for advice.

g. Synod decides not to commit the Christian Reformed Church to membership in the World Council of Churches at this time.

1) Further information regarding the actual functioning of the World Council and the implications of membership is needed before a responsible judgment on membership can be made.

h. Synod instructs its Committee on Inter-Church Relations to seek ways and means of arriving at a fuller understanding and riper judgment with respect to the World Council of Churches, to provide for the Presence of observers at principal meetings of the World Council and its subsidiaries, to encourage study of this matter by the churches, and to keep Synod informed of its findings.

Just a few comments. The report and the recommendations are very cautious. Obviously the recommendations were drawn up so that both pro- and anti- W.C.C. forces could accept them. There is the general statement concerning a desire for the unity and oneness of the church of Christ. With this all could agree. There is the recollection that the C.R.C. in the past had already recognized its ecumenical calling.

But especially was it the desire of Synod to express itself with respect to the decision of the Gereformeerde Kerken in the Netherlands concerning the permissibility of Reformed churches to join the W.C.C., and the possibility that the Gereformeerde Kerkenmight do so. Interesting is the advice of the Minority Committee in this regard. Read it again in “e” above. Note that there is neither a “yes” or “no” answer given to the problem. The answer suggested is hardly clear and definite advice to a sister church. The recommendation simply points out several “problems” which have doubtless already been considered by the Gereformeerde Kerken. The committee suggests that their sister denomination consider first of all their own internal unity. What this specifically means, I am not sure. Two things come to mind: 1) that joining the W.C.C. might cause a “split” in the Gereformeerde Kerken — in which case they ought to think twice about joining the W.C.C.; or whether they might not lose their distinctiveness as a denomination in joining the W.C.C. The other two questions posited by the committee are indeed serious questions worthy of careful consideration — but hardly constitute advice to their sister denomination concerning whether they should join W.C.C. or not.

Finally, the minority committee advises that Synod of the C.R.C. do not commit the denomination to the W.C.C. at this time. Those last words point to the crux of the advice of the committee. The committee apparently realizes that there are many in the C.R.C. who are not yet ready for the step of seeking membership in the W .C.C. They present two grounds for their advice (see “g” above). The first ground suggests that the C.R .C. ought to obtain further information on the W.C.C. If the C.R.C. does lack sufficient information before a responsible judgment on membership can be made, it would truly be a good ground for not joining at this time. However, the question might well be asked: is not sufficient information presently available on the W.C.C. — and have not responsible, capable members of the C.R.C. already considered this information? What more is required before a “responsible judgment on membership” could, be made? Or is this ground a means of delaying a decision (which might be unfavorable) until a favorable decision is comparatively certain?

The second ground to the recommendation indicates that the above conclusion is correct. The committee indicates that they themselves are not yet certain whether the C.R.C. is ready “to undertake further ecumenical responsibilities.” This is just another way of stating that the committee fears that action to join the W.C.C. at this time would arouse too much public opposition. Give the churches another five or ten years, and then they may be ready for “further ecumenical responsibilities.” But the C.R.C. Synod did not adopt this advice. Rather, it approved the majority report which I hope, D.V., to consider next time. 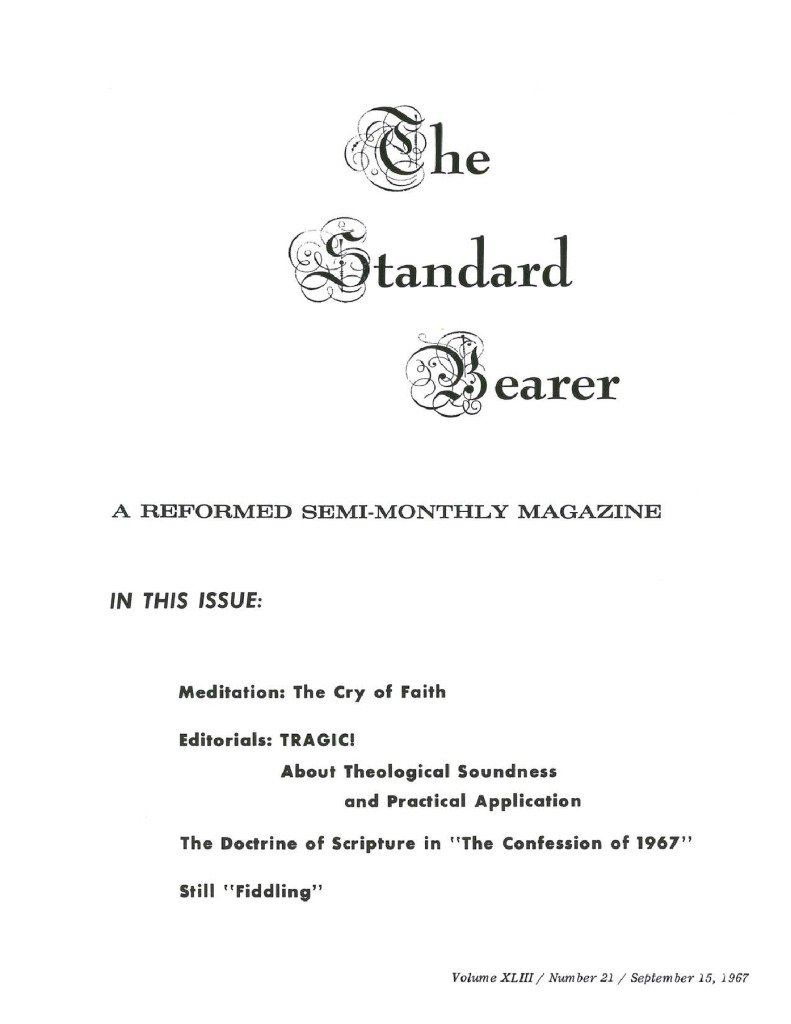