The undersigned was going to write concerning his labors in Loveland, Colorado in this issue, but this will have to wait till the next issue of our periodical. At this time the writer of these lines is enjoying a few days of relaxation at home in as far as that is possible at a time when the entire family is busy with the activities of the Young People’s Convention held in Hudsonville, and also in the celebration of our twenty-fifth wedding anniversary. Our many thanks to all who have sent us their well-wishes and prayed God’s blessing upon our family life. So much in passing. One can understand that our life of relaxation is still that of the busy man.

Just today we received a copy of a notice which a certain “Consistory” sent to a brother who requested the use of the church building whenever they would have one of our ministers present, be this week day or on Sunday evening.

Evidently the following is the reply which they received verbatim:

“That we grant C. Vander Molen the use of the building for any two specified Sunday evenings each of August and September, with this reservation:

1. That the building be not used to slander the congregation which meets there every Sunday, nor that propaganda be made which is destructively divisive.

2. And, that, in granting the building we hold him responsible to use the building for the advancement of the holy catholic church.”

Now what shall we say about this?

In the first place that we heartily endorse the proposition in Arabic 1 that the “building is not to be used to slander the Congregation that meets there every Sunday.” Slander is always wrong, sinful and belongs to the very works of the devil. Surely also the pulpit is to be devoted also to the Christian calling to promote as much as possible the good character of our neighbor and so fulfill the law of Christ. So this I’m quite certain Mr. Vander Molen can and does quite heartily endorse. And so do I by the mercy of God.

However I do have an objection against that proposition. It is this: it is too limited. It limits and prohibits the church for use to slander the congregation which meets there each Sunday. That is too limited. It is the limitation of a commandment which is of broader application.

I have searched my heart and wondered why such a “condition” for the usage of the building could be sent to Mr. Vander Molen. Has the undersigned at any time during the 17 times that he preached the Word in Pella either in the American Legion Hall or in the homes slandered the congregation? Or has he done so in the letters that he sent to the homes of the brethren and sisters when he pointed out the sin of the “Consistory” of Pella? If I have slandered, uttered a false report with the malicious intent of injuring the reputation of the “congregation” of Pella, let it be pointed out to me either in private letter or publicly. But let it not be insinuated, let not the covert suggestion be made that the intent of the usage of the building is for the purpose of publicly slandering the congregation. The Lord forbid that I should thus desecrate the place where for seven happy years I might break the bread of life in Pella.

We also most heartily concur with the sentiment which reads as follows: “nor that propaganda be made which is destructively divisive.” I like this “condition” because now I may preach in such a way that it isconstructively divisive! That former, the conduct and speech which is destructively divisive surely belongs to those who speak the lie, whether outright or covertly. However, where the truth is spoken in love, and sins are pointed out, also concrete demonstrable sins of a “Consistory,” there a constructive work is being performed. When Paul resists Peter to his face in Antioch (Gal. 2) he is working a “division” indeed, but the divisiveness of the cross which separates the goats from the sheep. And that is constructive, When a man goes to see his neighbor and with good admonitions corrects him and fails to gain his brother he has worked divisive, only it was a constructive work in the Church even when he must count him as a heathen and as a publican. I trust that the point of comparison, will not be misjudged.

Personally I have no need of pointing out the sins of the “Consistory” in Pella from the pulpit. I have done so to them fade to face and also in letters. The Spirit does not always strive, and neither do I have to continually ploy and harrow what has been sufficiently belabored. God is wiser than the folly of such conduct. However, I am interested that the sheep in Pella receive sound words of doctrine so that they may not have a warped life and world view and may not go bowed under burdens which Christ did not place upon, his church. Liberty without license is our blessed inheritance! If such preaching makes division between the sons of liberty and those of the flesh it is sufficient to me with a sufficiency that is of God! For that is not destructively divisive, but is the building of the church upon the foundation besides which there is none other.

Frankly, I also agree most heartily with the final demand placed upon the shoulders of brother Vander Molen! And I believe that it is a responsibility that he most tremblingly assumes. No, not in a cringing fear before the dictates of a “consistory” who speaks of seeking the advancement of the holy catholic church, but will not as much as touch it with their own finger, but with a fear that trembles before the mighty God of Jacob, and says: “Surely the Lord is in this place and I knew it not . . . . How dreadful is this place! this is none other but the house of God and the gate of heave!” Gen. 28:16, 17.

Let not a “consistory” speak so sanctimoniously about a church building, and express so grave concern about the “advancement of the holy catholic church” which has rent the church of Christ in two by parliamentary decision, and that, on the alleged ground that others had rent the church, or rather had left it!

In conclusion let it be remembered: it is more important that the truth in Christ be proclaimed than that the faithful brethren in Pella ever again use the building which is their rightful possession! 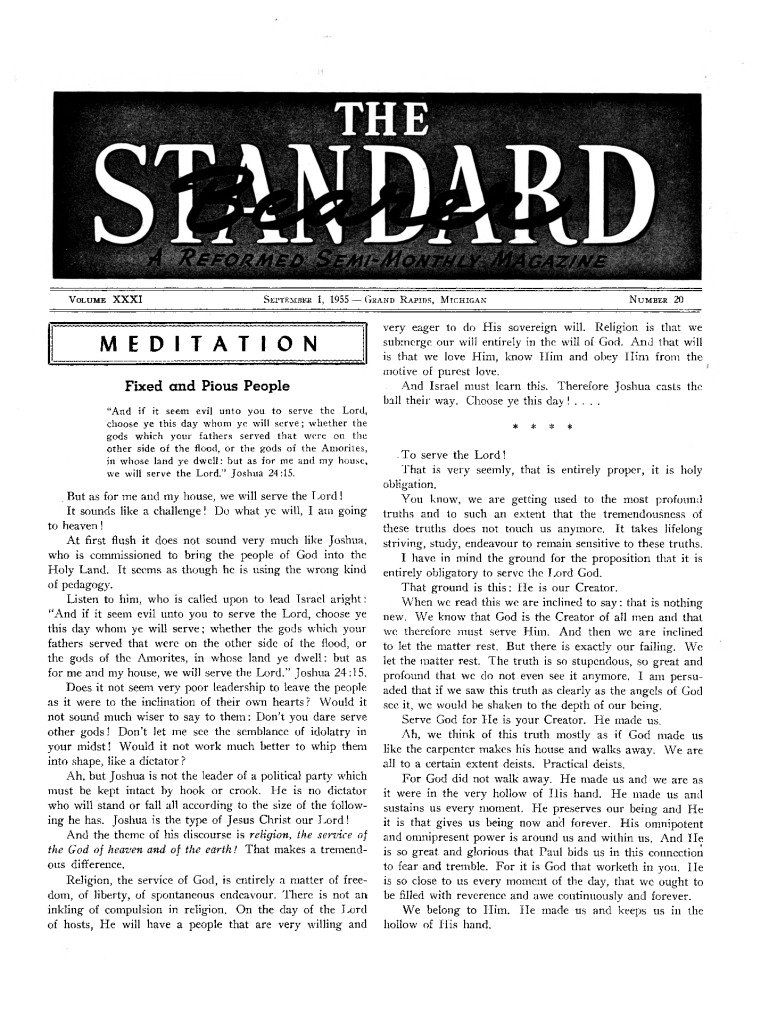