Luther Knocks Down the Door

Luther Knocks Down the Door

To be read to your children and grandchildren.

The Protestant church has always held Martin Luther in esteem. The

Reformed church holds a special warm and grateful place in its heart for him, owing its very heartbeat to the work which God accomplished through Martin Luther. It is satisfying that the world also recognizes the vast importance of this man. In a special millennium issue of Life magazine published in October, 1998, a collection of experts and scholars took it upon themselves to judge and rank the 100 most important events that changed the world of the last millennium. The Protestant Reformation of 1517, precipitated by Luther nailing 95 theses to the church door of Wittenberg, ranked as the third most important event of the last 1000 years. It was superseded only by the discovery of America (2) and the printing of Gutenberg’s Bible (1) in importance.

It was of interest to note that although a particular event made the rankings, the man who was responsible for the event did not necessarily rank. For example, Gutenberg’s Bible was rated as the number one most important event of the millennium, but Johann Gutenberg, the man, a relatively obscure and colorless individual, did not place in Life’s ratings of the 100 most important people of this millennium. Not so with Martin Luther. He ranked as the third most important individual, surpassed only by Christopher Columbus (2) and Thomas Edison (1). It occurs to me that Life’s rankings depend on which kind of light one deems most important. Nevertheless, Martin Luther and the Reformation which he began impacted the church, the world, and all society profoundly.

As this millennium draws to a close, may we and our children never minimize the glorious work of the Reformation of 1517.SING: A Mighty Fortress Is Our God

When Martin Luther was a boy,

Singing was his greatest joy.

He sang to earn his daily bread;

He sang so well, in tones so sweet

That people stopped him on the street.

Later, he taught all to sing,

And lift their voices to their King.

In Luther’s church, you paid for sin

By dropping money in a tin.

The church was evil, in and out,

And Luther soon began to doubt.

One day, he found a Bible, chained,

Penned in Latin, old and stained.

“The just shall live by faith,” he read;

Christ paid the full price in my stead.

This verse in Romans changed his life;

But soon his days were filled with strife.

King and pope, church and state,

Upon this monk poured out their hate.

His books they burned, they mocked and scorned;

Then was THE REFORMATION born!

They brought him to a rigged-up trial,

And questioned him for quite a while.

They wanted him to shame God’s Word,

But this is what those scoffers heard:

HERE I STAND. I CANNOT DO OTHERWISE. GOD HELP ME.My conscience by God’s Word is bound;

My feet will stand on solid ground.

Martin Luther would not budge.

He knew God would be his Judge.

SING: Be Thou My Judge

He nailed the theses blow by blow,

So Germans would God’s goodness know.

Though Satan and his hosts assailed,

The mighty Word of God prevailed.

Those hammer thuds that shook the world

Stilled all the lies that Satan hurled.

The German monk caused quite a flap.

Was NOT a day of Halloween!

We never for our sins must pay;

And all the while, he preached fine sermons;

He wrote a Bible for the Germans.

One night, at work by candle’s glow,

He sensed the presence of a foe.

Full force he threw a jar of ink.

On castle wall there still remains

The faint outline of blackened stains.

This learned man did seldom tire;

He answered all who did inquire.

But Luther’s love for children, wife,

Were treasured moments in his life.

To Luther’s heart was very dear.

A mighty fortress is our God,

Who caused His Word to spread abroad.

Protecting it from Satan’s lies,

And men who did the Truth despise.

So that this Truth is now our own —

“The just shall live by faith alone.”

The Reformation now is past;

Faith of our fathers — it will last.

And little children still give praise

For this Reformer God did raise.

SING: A Mighty Fortress Is Our God 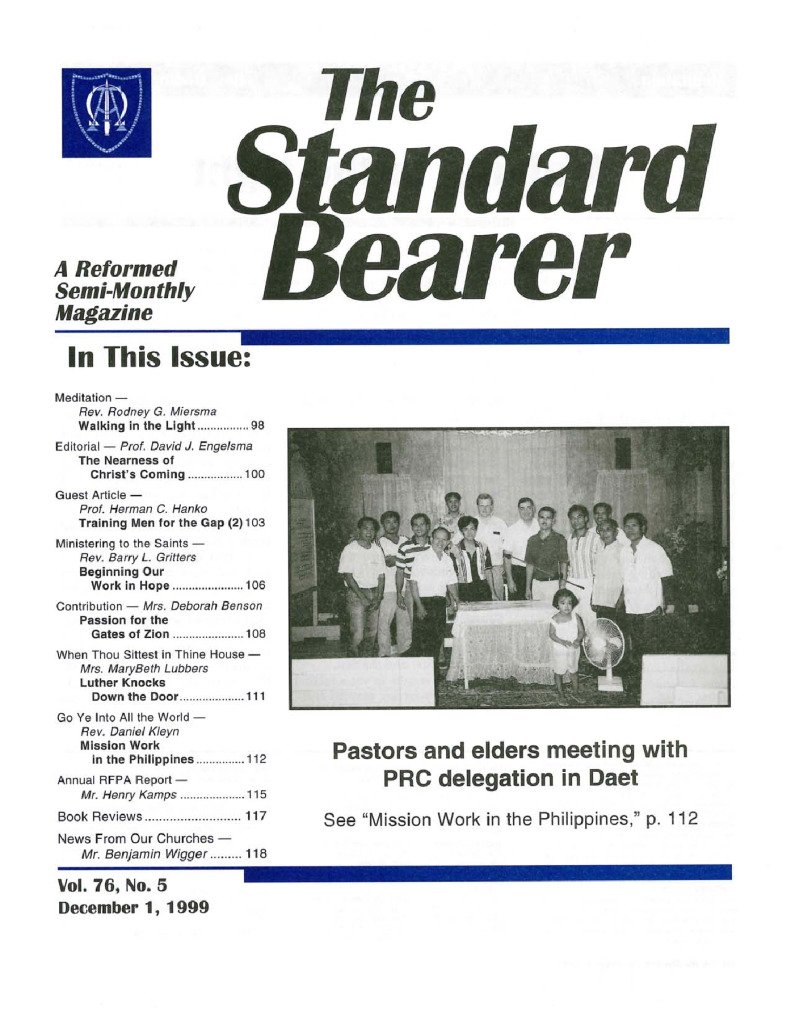