During the reformation period in Holland, from 10-50,000 Baptists were put to death by cooperating Roman Catholic and Protestant Churches. This was the result of a deliberate refusal to listen to what the Baptists were saying, while using Munster as a pretext for branding “every baptist” as a heretic. You are an educated man, and as such should know better. In your “Covenant” editorial (The SB, April 15, 1990), you seriously misrepresent us and make some very false accusations, the kind that led your spiritual ancestors to slaughter Baptists. Please print the following as a letter in the next issue, to further prevent such animosity between blood-bought believers.

The following are quotes from the article, “The Covenant of God and the Children of Believers,” and a corresponding correction:

1.”Here the Reformed faith—Calvinism—parts company with all Baptists” (DJE).

Where have you been? Even the current handbook of denominations in America lists the Reformed/Calvinist Baptists as a separate group of churches. And what about Spurgeon, Carey, and the Gospel Standard Churches of England, or Trinity Pulpit in America?

2.”Every Baptist seriously errs…every Baptist holds that the children of believers are lost heathens outside the church…. There are no children in that church” (DJE).

How wrong. As a Baptist who believes in total depravity (and the other four points of “Calvinism”) I believe that all children are “children of wrath, even as others” (Eph. 2:1, 2), until they am made alive. You confess later in the article that some of your own baptized children “grow up ungodly, unbelieving, and disobedient, and perish. God is not their God.” Well as Baptists, we have been welcoming believers into fellowship and into our churches as MEMBERS, of all ages. If a five-year-old understands, believes, and repents he/she is baptized and becomes a member. You are so far from the truth that I can safely say that most of the Baptist churches I know have children who are members. Unlike your churches, we welcome a child who believes in Jesus even when the parents don’t believe.

3. “Every Baptist Church denies membership to all children” (DJE).

I know of no such Baptist church anywhere. How many of our constitutions have you ever examined? Have you heard of the 1689 Confession, so similar to the Westminster?

4. “The Baptist Church will not suffer the little children to come to Christ, but forbids them” (DJE).

It was in the angry atmosphere created by such false statements that Reformed Dutch Protestants killed Baptists. We invite all who believe to join, as the church allows only believers to unite with the body of Christ. Age is no barrier, as witnessed by J. Edwards in Narrative of Surprising Conversions.

5. “Among the other implications of this grim teaching…is that there is no ground for any hope of the election and salvation of the children of believers who die in infancy or in early childhood” (DJE).

Wrong again. I could quote from a dozen Baptists beginning with Spurgeon, who hold the view that all who die in infancy AND THE ABORTED CHILDREN are elect and will be known in heaven, regardless of who the parents were. The infant-baptist, Dr. Dabney agreed with Spurgeon on this. But what hope can you offer to a grieving mother who has not had a child sprinkled? The child died a pagan for lack of a few drops of water and is in hell as a heathen.

Finally, do not set up a false position and then seek to defend your own. Be fair. The Baptist Pastor, David Kingdon, has written a book worthy of your study calledChildren of Abraham. With the recent revival of Calvinism among Baptists, let us learn to rejoice in common ground and cease all forms of misrepresentation.

My reply to this Baptist objection against the Reformed doctrine of the covenant appears in the editorial column of this issue of The Standard Bearer. A second installment of the reply, treating the theological aspects of the objection, will follow in the August 1 issue.

Pastor Oosterman recommends the book by David Kingdon, Children of Abraham. Kingdon makes a valiant effort to harmonize the Baptist denials that baptism has come in the place of circumcision and that the infants of believers are included in the covenant with the Reformed doctrine of the unity of the covenant of grace. He fails. If circumcision does not find its fulfillment in baptism, and if the promise of the old covenant to the children of godly parents is not maintained under the new covenant, the covenant with Israel and the covenant with the church are two, fundamentally different covenants. This is the Baptist’s position, willy-nilly. He cannot escape it.

I have read Kingdon’s book. Has Pastor Oosterman read Professor Herman Hanko’s refutation, We and Our Children?

The fifth in my series of editorials on the covenant appears in this issue of The SB. A sixth, concluding installment will follow. I hope that the intrusion of the present controversy (welcome, of course) does not detract from following the line of the series on the covenant through to the end. 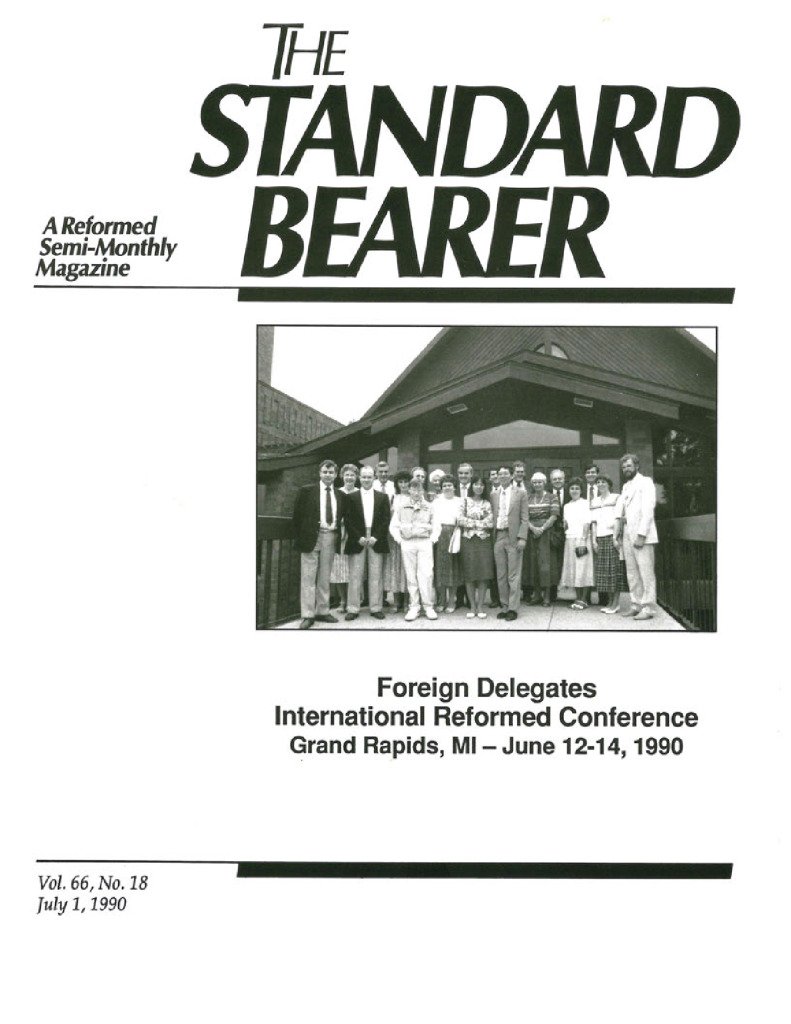