“And thou shalt call his name Jesus: for he shall save his people from their sins. “

Such was the word which the angel of the Lord had declared unto Joseph the carpenter, who was engaged to a virgin whose name was Mary, and who was to become the mother of the long awaited Messiah.

All through the Old Dispensation there was the promise of His coming. Beginning already with the prot-evangel, pronounced in the Garden of Paradise to Adam and Eve, our first parents, reaffirmed in all the patriarchs, reiterated by all the prophets, foreshadowed in all the sacrifices and ritual, and brought to fulfillment in the birth of Christ in the cattle stall of Bethlehem. It is the purpose of Matthew’s gospel to show this fulfillment. Clear this is from the verses that immediately follow our text. “Now all this was done, that it might be fulfilled which was spoken of the Lord by the prophet, saying, Behold, a virgin shall be with child, and shall bring forth a son, and they shall call His name Emmanuel, which being interpreted is, God with us.”

Marvelous revelation to Joseph, and to all those who look for salvation in Israel!

Joseph was engaged to Mary, a virgin of the lineage of David. And Mary was great with child, of which Joseph knew that he was not the father. The only thought therefore that could cross his mind was that Mary must be considered an adulteress. Jewish law required that such cases should be publicly dealt with, and would serve as legal grounds for divorce or separation. And before the law engaged couples were as good as married. Consequently were he vindictive enough, he could legally and publicly be separated from her forever. But he was a just man, and one who feared God, and besides he loved Mary so much that he would spare her this publicity, and therefore he was of a mind to have this separation done secretly, which, according to some was also permissible.

Just at the moment when his soul was heavy with these thoughts, the angel of the Lord appeared to him in a dream, exhorting him not to do this contemplated thing; saying unto him: “Fear not to take unto thee Mary to be thy wife; for that which is begotten in her is of the Holy Ghost.” This should allay all his fear. And in our text besides being informed that she shall surely have a Son, he is commanded to call His Name Jesus, for He shall save His people from their sins.

No more fitting theme for meditation in this season in which we celebrate the Saviour’s birth! Theologically these words contain profound truths. Practically there lies hidden in them the faith and hope of many hearts. The Apostle Paul puts it this way: “It is a faithful saying and worthy of all acceptation: Christ Jesus came into the world to save sinners! ”

That’s what Christmas is all about! Yet, in the midst of all the tinsel, bell-ringing, and frivolity, this is precisely what is forgotten in our modern manner of celebration. O, indeed, there is room for joy and thanksgiving on this occasion. For did not the angel say: “Behold, I bring you glad tidings of great joy, which shall be to all people”? But remember, that joy rests only on the fact that we rejoice in the fact that He Whose birth we celebrate is the Saviour from sin!

He shall save His people from their sins!

And their sins are many and great! For not only are they conceived and born in sin, burdened with the original sin and guilt of their first parents, Adam and Eve, in Paradise; but from the moment of their birth to the day of their death, they constantly add to their sin and guilt. As an insurmountably high mountain has the pile of their sin become, crying out as it were for the judgment of God’s holy wrath.

When man sinned in the beginning he missed the mark, the goal that God had set up for him; namely, to love the Lord God with all his heart, mind, and strength. And ever since that first sin, man’s nature has become so corrupt that all he does is miss that mark. And God Who is unchangeably good and holy, cannot rescind His law, remove the goal, relinquish His demand, lest He deny Himself. Consequently, all men are pronounced sinners and guilty before God, and subject to His righteous judgment. Scripture pronounces all men sinners. “All have sinned and come short of the glory of God.” The natural man is foolish, disobedient, deceived, serving diverse lusts and pleasures, hateful and hating one another. All have gone astray. There is none righteous, none that understandeth and seeketh after God. There is none that doeth good, no, not one. Such is the undisputed declaration of the Word of, God.

And not only so, but because of sin man is also subject to all the attending miseries of sin. For with sin came also death. Man is not only desperately wicked, but he is also desperately miserable. He is pressed down under the curse of God and the Divine law. God shackles him in the prison of sin and death. In that confinement he is a slave of sin. He lost his real freedom, which is the privilege to do the will of God. He became by nature spiritually blind, deaf, and dead. As by one man sin entered into the world, and death by sin, so death passed upon all men, for that all have sinned and come short of the glory of God.

But God, Who is rich in mercy, even when we were dead in trespasses and sins, while we were His enemies, sent His Son, made of a woman, without the will of man, born under the law, in order to redeem them who all their life time were subject to bondage.

Jesus, Saviour! That is His Name!

That name Jesus signifies: Jehovah is salvation, or Jehovah saves!

None other than the living God Himself, the eternal and unchangeable One, saves!

This He does through the sending of His Son into the world, Who is united to our nature through an operation of the Holy Spirit in the womb of the virgin Mary, the last of the royal line of David, the end of the covenant generations that must bring forth the promised Saviour. This He does by the miracle of grace which causes the Person of the Son to be conceived without the will of man. This He does by causing this Son to be born under the law, and under our sin and guilt, while He remained the sinless One. This He does by sending this beautiful Saviour to the cross of Calvary laden with our sin and guilt, where He bore all the vials of Jehovah’s holy wrath overagainst our sin, until no more wrath remained for us. This He did when He made Him sin for us Who knew no sin, in order that we might be made the righteousness of God in Him. This He did when He washed us from all our guilty stains in His precious blood, the blood of atonement. But even so, the gospel of salvation is not complete. He does much more to save us!

Jehovah causes Jesus, our Lord, to be raised from the dead. And He was raised in order to show to us that we are now justified before God and acquitted from all our unrighteousnesses. Yea, He even exalts the Saviour to the highest heavens, and gives unto Him all power in heaven and earth, and fills Him with His Spirit by which He returns to our prison and opens its doors, and liberates us from the bondage of sin and death. O, indeed, He is Jehovah Who saves unto the uttermost! He makes us who once were His bitter enemies, to become His covenant friends. He calls us from darkness, and makes us to walk in His marvelous light. He makes us His sheep who will follow Him whithersoever He leads, and at last into the realm of everlasting glory.

Whose salvation cannot fail! For He SHALL save His people from their sins!

Jesus, Jehovah saves, is the Saviour of His people!

Contrary to the popular, belief that He is the Saviour of all men, or that He makes salvation possible for all men, the text specifically teaches that He saves His people, and His people only. Jehovah, which is that Name of God whereby He revealed Himself to His people as to none other; has made a covenant with His people in Christ from before the foundation of the world. With them He established this covenant, and for them He maintains it. The purpose of that covenant is that He may bring to Himself through the way of sin and grace this people, whom He has predestinated to be conformed to His image. Jesus called them His sheep, for whom he lays down His life. These He efficaciously calls out of darkness into His marvelous light. These He justifies in the blood of atonement, and sanctifies by His Spirit. In them He implants saving faith, and gathers them by His Spirit and Word. And them will He also at last present without spot or wrinkle in the assembly of the elect in life eternal. This people He forms for Himself and they shall show forth His praise.

Indeed, this is not a popular doctrine, and modern evangelism will not have it so. In this Christmas season a different doctrine will be proclaimed, that contradicts the truth of our text. But understand it well, a Jesus for all is a Saviour of none!

The gospel in our text, is not a gospel of man, but it comes directly from the throne of God. It speaks to His servant Joseph, and through him to all His people: Thou shalt call His name Jesus, for He shall save His people from their sins.

The good work which He had begun in us He will finish it unto the end!

And when His work of salvation shall be finished, we with all His people shall exclaim: 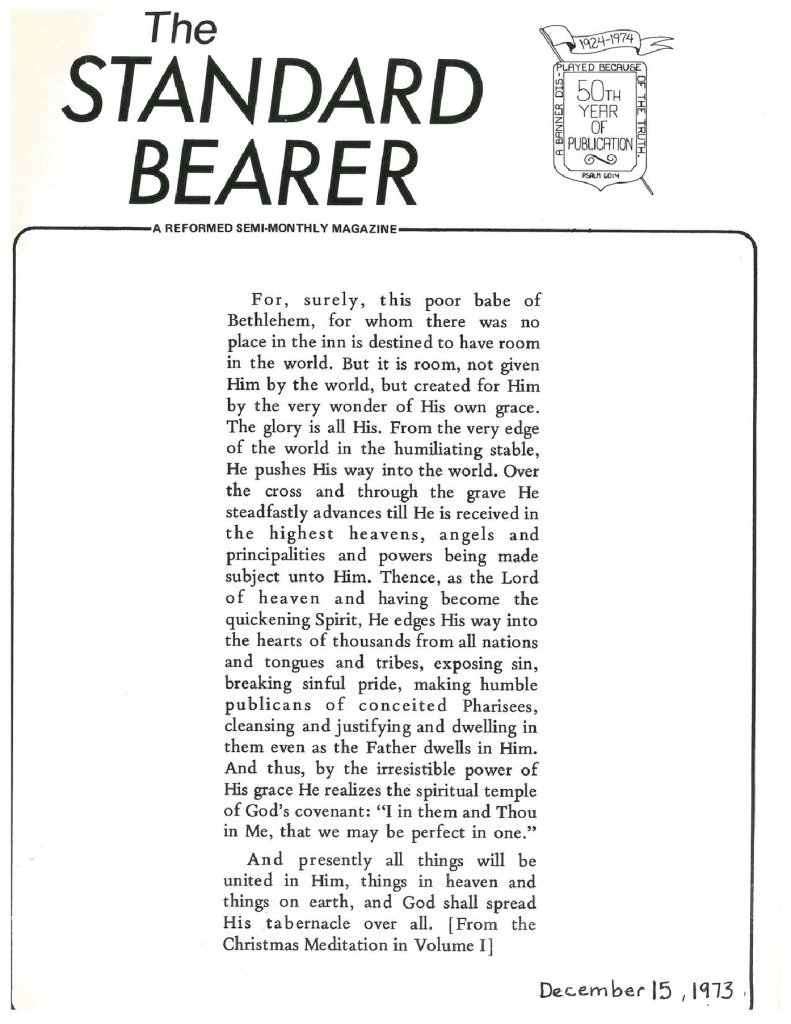