The Church in Soviet Russia

In the latest issues of Life magazine a serial appears acquainting the readers with the history of the rise to power of modern Soviet Russia. The story begins with the narration of the pomp and glory of the Czarist rule before the turn of the century, and develops the steps that led to the overthrow of that government and the rise to power by the revolutionary communist regime that is threatening the existence of all so-called democratic ideologies.

We will recall that we concluded our preceding article by calling attention to the treaty which was arranged between Frederick II and Gregory IX at Anagni, Sept. 1, 1230, upon Frederick’s triumphant return from Jerusalem, the holy city. The army of the emperor had been victorious, and the shrewd pontiff evidently considered that prudence was the better part of valor. He deemed it wise to form a truce with the conquering emperor, Frederick II.

“Fear God and keep His commandments.”  That, Solomon declares, is the sole duty of man.

We now come to the passage in which Paul speaks of what has often been denominated: the matter of mixed marriages!

10. And I will pour upon the house of David, and upon the inhabitants of Jerusalem, the spirit of grace and of supplications: and they shall look upon me whom they have pierced, and they shall mourn for him, as one mourneth for his only son, and shall be in bitterness as one is in bitterness for his first-born. 11. In that day shall there be a great mourning in Jerusalem, as the mounring of Hadadrimmon in the valley of Megiddo.

Especially those that are of the opinion that in these seven seals we have reference, to things that already happened in the past, reference to definite historical periods, are bound to apply this principle also to the sixth seal. All kinds of different interpretations have been presented. We will not tire your attention with all of these explanations of the sixth seal. Just one of them we will mention in this connection, just to give you an idea as to how the Word of God has strangely been interpreted in the past and how it is sometimes interpreted even in...

Christelijke Encyclopedie (Christian Encyclopedia). Second Edition. Edited by Drs. F.W. Grosheide and G.P. Van Itterzon. Price f 29.5o per vol.  Of this work we received two volumes. It stands to reason that we cannot be expected to read through a work of this nature, and we did not. Nevertheless we perused these two volumes and read several articles in detail rather carefully. Our conclusion is that this is a very good work, indeed. It is rich in information, its viewpoint: is Christian and I may even say that, on the whole, is Calvinistic.

As we wrote last time, as churches we are passing through a period of trouble.  Or let me rather say that we did pass through such a period for, except for the question about the property, which in comparison with the principle of the controversy is a minor matter, the trouble is settled, those that departed from the Protestant Reformed truth have left us, and our churches have come out of the fire of the trouble and dissension purified and strengthened. 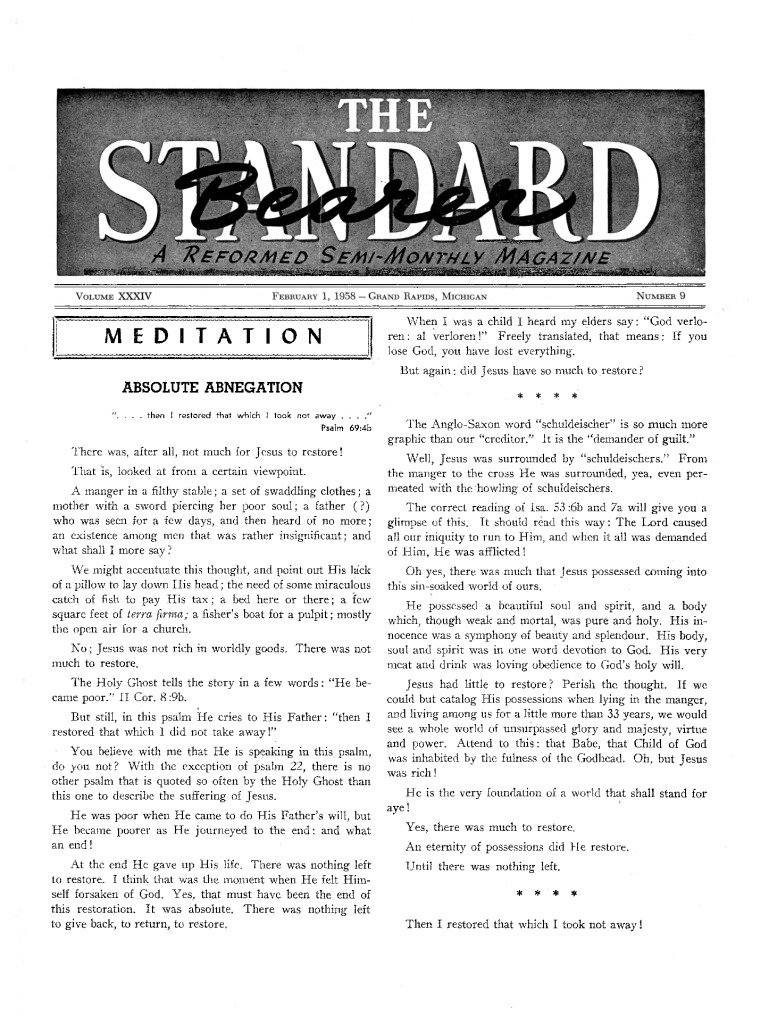