We have been examining the question of the origin of homosexuality in the light of a distinction which is often made between a tendency towards this sin and the actual performance of homosexual acts. Many believe that a man is not responsible for his homosexuality because he is born a homosexual and can do nothing about this tendency of his nature. He cannot fight it; he cannot be changed; he is a prisoner of his genes.

It is interesting to note (though we do it by way of a parenthetical thought) that modern humanism is much more “deterministic” than Calvinism. Calvinism, with its emphasis on the absolute sovereignty of God even over sin, is often charged with determinism. Man has no control over what he is or what he does; he is the object of “fate.” God rules supreme in spite of anything which man wants to do or can do.

But nothing is so deterministic as modern humanistic thought and atheistic behavioral psychology. Those who propound these notions make man an absolute slave, either of his genetic structure over which he has no control, or his environment which shapes his behavior and which cannot be altered or modified by anything he does. He is a product of his ancestral genetic heritage and/or of the environment in which he was brought up. All his life long he remains a slave to those forces which shape and mold him in his entire destiny. That is determinism with a vengeance.

But however all that may be, Scripture teaches something quite different, namely, that each man is conceived and born in sin. The result is that he comes into the world with a corrupt and depraved nature which is incapable of doing any good and inclined to all evil. This depravity, according to Scripture, is complete and total. It is not a partial depravity which leaves man with a free will to choose for the good or for the evil. It is not a partial depravity of every part of his nature so that he remains capable of doing some things good in the sight of God. It is total and complete. The good is foreign to him. He can only sin in everything that he does. He even lacks the ability to will to do good.

We need not belabor this point or enter into it in detail. Everyone who has heard the testimony of Scripture, and who knows the long and solid history of this truth beginning with Augustine, going on through Calvin and Luther, and including all the great Presbyterian and Reformed divines, believes and confesses this fundamental truth. It is one of the key points of Calvinism.

This corrupt and depraved nature is a fountain and source of every evil which man commits. Our Belgic Confession puts it succinctly when it states:

We believe that, through the disobedience of Adam, original sin is extended to all mankind; which is a corruption of the whole nature, and as an hereditary disease, wherewith infants themselves are infected even in their mother’s womb, and which produceth in man all sorts of sin, being in him as a root thereof and therefore is so vile and abominable in the sight of God, that it is sufficient to condemn all mankind (Art. XV).

Every sin which has been committed in all the history of the world, no matter how detestable and abominable, comes from that depraved nature as a gush of filthy sewage comes from a sewer. Every man who is born with such a nature is inherently capable of committing every sin which man has ever committed. This ought to give every one of us pause. Everyone of us is capable of every sin, including the sin of homosexuality. Perhaps not all men commit this sin, for many are restrained by other sins of pride, self-exaltation, and desire to conform to approved standards by one’s peers. One sin, such as pride, keeps another sin from coming to light in overt conduct. Just as fear of being fined keeps one man from running a traffic light, so does fear of sneering looks from one’s peers keep one from the sin of homosexuality. But the potential is there—in everyone. Homosexuality, as well as every other sin, has its origin in that depraved nature. There is no other explanation than that.

But one may ask: If sin is rooted in a corrupt nature with which we are conceived and born, is it not, after all, true that sin (including that of homosexuality) is a matter of innate traits and tendencies over which we have no control and for which we cannot be held responsible?

Scripture is very clear on the answer to that question. The corrupt and depraved nature with which we are born is our fault, our responsibility, with which we stand condemned before God. Did you notice the statement in the Belgic Confession which we quoted above? This nature with which we are all born is “so vile and abominable in the sight of God, that it is sufficient to condemn all mankind.” The meaning here is clear. Even if a person dies at birth, he already stands under the condemnation of God because of his corrupt nature. Even if a man never sinned from the moment of birth (something obviously impossible because of his corrupt nature) he would still go to hell because he is responsible for the total depravity of his nature with which he has come into the world.

This is, of course, the truth of original guilt, a truth, by the way, not very much believed in the present church—although it was taught by many both in the Reformed and Presbyterian tradition. Nor are we interested in arguing the whole subject here, for that is somewhat removed from our main discussion of homosexuality. The interested reader can consult the locus classicusin Scripture, Romans 5:12-14 to pursue this matter further; and he can, in connection with the interpretation of this passage, consult the staunchly Reformed and Presbyterian commentators who have held to this view.

That Scripture teaches our responsibility for our corrupt nature goes almost without saying. David prays in Psalm 51:5, “Behold, I was shapen in iniquity; and in sin did my mother conceive me.” David is not trying here to find some kind of excuse for his adultery with Bathsheba and his murder of Uriah. He is confessing his sin; and among those sins which, with broken heart, he confesses before God is his nature which was sinful from his mother’s womb.

The Heidelberg Catechism emphasizes this throughout (cf. e.g., questions and answers 5, 7-10 and others). But one very significant question and answer appears in Lord’s Day XXI:

What believest thou concerning “the forgiveness of sins”?

That God, for the sake of Christ’s satisfaction, will no more remember my sins, neither my corrupt nature, against which I have to struggle all my life long . . . . “

The forgiveness of sins includes not only the washing away of all my sins, but also the divine forgetfulness of my corrupt nature. That means that my corrupt nature has also to be forgiven by God. I am guilty for that nature against which I have to struggle. I need forgiveness for that too. And God in His mercy forgives because the blood of Christ was spilled on Calvary not only for my sins, but also for my evil nature. Without that I would still go to hell.

All this needs emphasis, not only because it explains in a Scriptural way the origin of the sin of homosexuality (over which question everyone dealing with the problem is fighting today), but also because it holds out to the homosexual the hope and promise of deliverance—but then only through the blood of the cross. Indeed, it is not too much to say that the hope of the cross for all homosexuality is just because this sin, as every other sin, has its origin in a sinful and depraved nature. 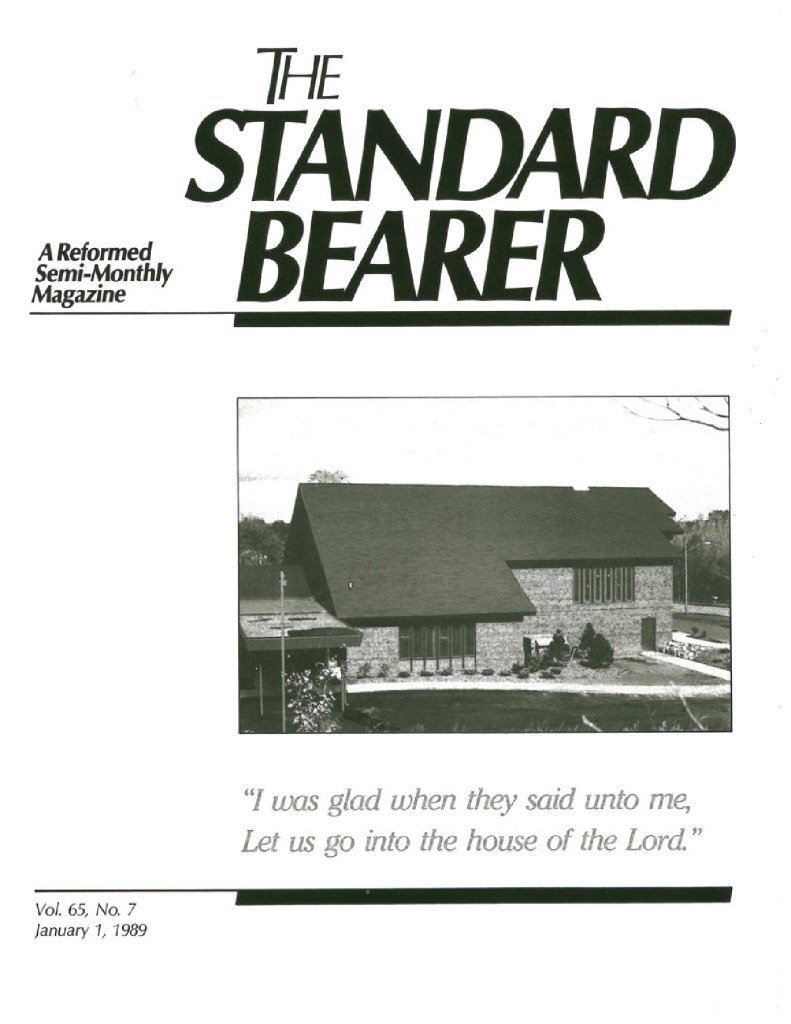