If the world’s problems are to be faced responsibly, there must be cooperation economically, politically, educationally, and scientifically. This few will deny. But also ecclesiastically! Christians from everywhere need to meet and talk and learn from one another. To to anything less is to exceed the sin of Nero. He only fiddled while a city burned. Today the world’s on fire! Because it is, churches need to seek one another in a significant worldwide ecclesiastical community. For these are not ordinary days. There is more to do than we have ever done before.

So wrote the Rev. Jacob Eppinga in the Banner of April 28, 1967 in an article entitled: ‘‘WCC? Yes.” Eppinga attempts to show why the Christian Reformed Churches must join the W.C.C. One receives the impression that Eppinga regards failure to join this ‘‘worthwhile” organization to be worse than the sin of that godless Nero who supposedly cared not at all that Rome was being destroyed by fire — on th e contrary, he enjoyed it. Is he accusing the Christian Reformed Churches of committing such terrible sin at this time? Is the C.R.C. (and our own churches too) committing the terrible sin of watching the world being destroyed by all manner of evil and corruption—while refusing to join that one organization through which there would seem to be the only hope of “putting out the fire?” That is a terrible charge, if true.

Why does there arise within the Christian Reformed Church now a debate about the W.C.C.? The present discussion begins because of a decision of the Gereformeerde Kerken in the Netherlands. Those churches adopted a position that there are no principle objections that a church of reformed persuasion should join the World Council of Churches. At the same time, that denomination requested answers from member denominations of the Reformed Ecumenical Synod concerning this stand. In response to this, the Synod of 1966 of the C.R.C. appointed a committee to formulate an answer for Synod’s adoption in 1967. From the 1966 Acts of Synod I quote the following (pp. 59-60):

B. Historical Synopsis (Acts of Synod, 1962, pp. 392-393). From 1914 to 1924 the Christian Reformed Church was affiliated with the Federal Council of Churches. In 1924 Synod voted to withdraw on the fol­lowing grounds: 1) Ecclesiastical alliances between orthodox and liberals are contrary to God’s Word.

2)   Liberalism is strongly in evidence in the Federal Council. 3) The Federal Council has broad programs in industrial, national and international affairs which do not belong to the proper work of the Church as an organization.

In more recent years the official attention of Synod has been drawn to the World Council of Churches largely through the actions taken by the Reformed Ecumenical Synod, which made pronouncements in 1949, 1953, and 1959, and again in 1963. Presently one mem­ber of the R.E.S. is affiliated with the W.C.C. (Indo­nesia) and the Gereformeerde Kerken in the Netherlands have announced that they have no principal objection to membership in the W.C.C. In a number of instances the Synod of our Churches has shown to be in sub­stantial agreement with the R.E.S.’s position regarding the World Council of Churches.

1. Synod appoint a special committee including members of the standing Committee on Inter-Church Relations to

a.  Synod has never explicitly defined its position.

b.  The Gereformeerde Kerken in the Netherlands are awaiting our reaction to their decisions, before they take any further action.

c.  In order to promote a helpful confrontation at the meeting of the R.E.S. in 1968, our position should be articulated and published in 1967.

The above decision is, evidently, the occasion for considerable discussion in the Christian Reformed Church whether or not it should join the W.C.C. Of course, that was not the question at all. Certain “liberals” (if 1 may term them such) in the C.R.C. have made this the subject of discussion in their churches and the “moderates” have taken it upon themselves to enter into this debate.

Secondly, it is evident then that the duty of the committee appointed at the last Synod was to define that position. That is, this committee was not to debate or question the position taken by the C.R.C., they were not called to re-consider the position, but simply to define it. That must mean that the committee was called to review all pertinent former decisions, to formulate these in a single statement for the approval of the Synod of 1967, and present this as answer to the stand of the Gereformeerde Kerken.

Nevertheless, there have been many attempts in the past year not to present a possible answer to the Gereformeerde Kerken, but to show why the C.R.C. should join the W.C.C. This is very disturbing.

Several arguments (old ones, repeatedly offered) are given in favor of union with the W.C.C. Below I will summarize these as presented in the Banner of April 28, 1967 by Rev. J. Eppinga and in the Federa­tion Messenger of March 1967 by Dr. J. Kromminga and Dr. D. Holwerda.

First, the nature of the Church (it must be one) “is the first consideration for the establishment of, or if established, affiliation with, a significant worldwide ecclesiastical community.” (Eppinga). Or again: “The unity of the church is, of course, spiritual in essence; but this spiritual unity must express itself in visible forms (as Jesus’ unity with the Father was visible in his person and work). Otherwise the life of the church cannot function as a sign to the world. This unity is not primarily, or even necessarily, organizational; yet it does not preclude a manifestation also on the level of organization.” (Holwerda). These are old argu­ments which, incidentally, could be used to support involvement with something like COCU too.

Secondly, “the unity of the Church is intended to be a source of mutual blessing for the various members of the Church.” (Holwerda). One must be willing and able to make use of the many Spirit-given gifts found in other denominations—and therefore must seek some organization where this can be done. The W.C.C. “fills the bill.”

Thirdly, because of the present unrest, poverty, race problems, population explosion, etc., there must be some sort of co-operation between churches in order that through united action these problems may be dealt with. This too points the church to the one large protestant organization where this is possible: the W.C.C.

But arguments, often repeated before, have been offered against joining the W.C.C. The Rev. E. Brad­ford presents some of these in the Banner of April 28, 1967. Others are given in various other articles and letters written in the Banner and other magazines.

First reason for continuing opposition to this or­ganization is the question whether the W.C.C. is a church or super-church. At present it is not. Never­theless, Bradford points out, the W.C.C. is headed in that direction. He rightly insists that the W.C.C. is not the organization in which the unity of the church can find expression.

Secondly, Bradford points to the “neoorthodoxy” of the W.C.C. and emphasizes that the faithful church cannot participate in that. He says, “The Council statements represent typical neoorthodox or Barthian theology. Accepting the method and conclusions of higher criticism, neoorthodoxy (and the W.C.C.) does not regard the Bible as objective, infallible word- revelation, but rather as a human record of search for and encounter with God. The Bible is said to become the Word of God as one experiences encounter with God. How can revelation be a private, subjective matter and at the same time provide a solid basis for resolving differences?”

He is right. And many, many other arguments have been, and can be, given to show that it is wrong to belong to the W.C.C.

But will the C.R.C. decide to join the W.C.C.? I doubt it—at least for the present. But the winds of change are strongly blowing regarding this matter too.

The same Dr. John Kromminga who wrote some twelve years ago, “…the confessional churches certainly ought to seek unity; but the question is very much in point whether the World Council of Churches is the organization through which that unity ought to be sought;” now writes, “The Bible, the creeds, the position of the Christian Reformed Church (as seen in a report adopted by Synod in 1944), and the world situation all commit us to concern for the other Christians and the other Churches of the world. The question must then be asked, ‘If not the World Council, then what?’ How is our concern to be manifested and expressed? How are we to show that we believe in one holy catholic and apostolic Church? Are we our brother’s keeper?” (The first quotation is from the Banner, April 28, 1967; the second from the Federa­tion Messenger, March, 1967.) 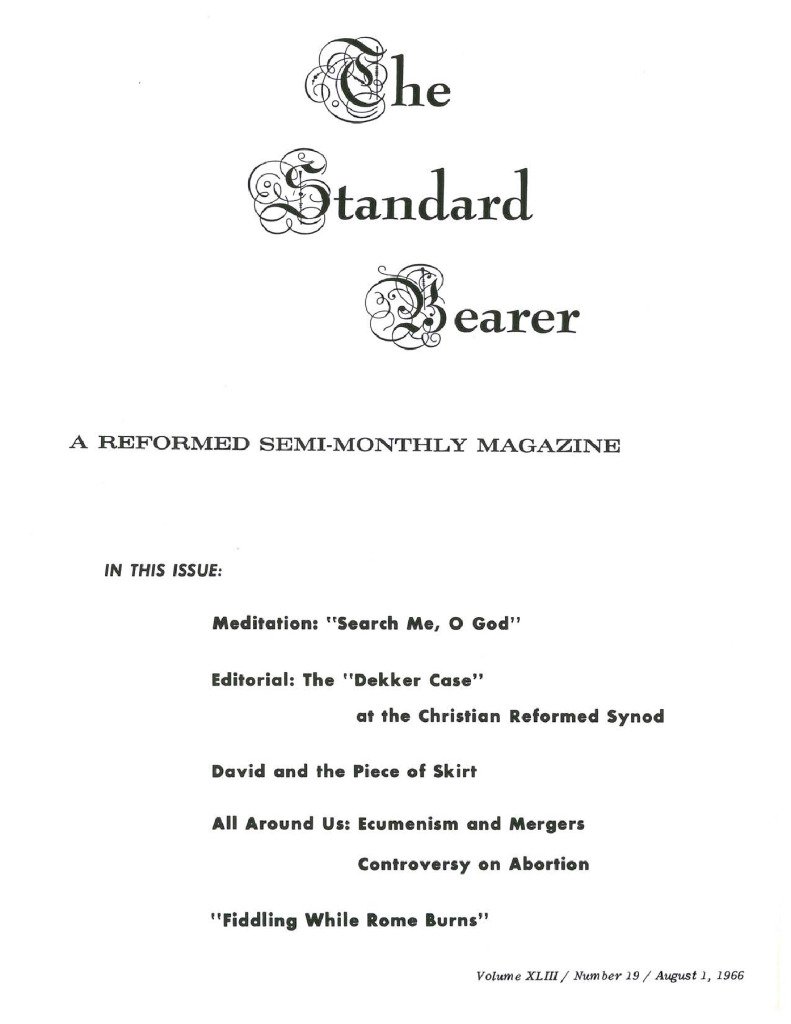