In our previous article we introduced the subject of Church Visitation by quoting the appropriate article of our Church Order and the decisions appended to this article by our churches as these are found in our Church Order manual. We also quoted Rev. Ophoff’s comments on this subject and observed in the light of all this that the work of church visitation is a serious labor aimed at the spiritual profit and upbuilding of the church. Mechanization must be avoided and sufficient flexibility must be allowed the visitors in this work so that they may feel free to depart from stereotyped forms in order to achieve this objective.

The work of church visitation originated in the churches of the Netherlands during the latter part of the sixteenth century. At first these churches were hesitant to introduce this work because they feared the danger of hierarchy. This was understandable. On the other hand, however, the need for some kind of supervisory work was keenly felt because in some Classes there was little regard among the churches for denominational unity. Moreover many at this time had been admitted into the ministry whose training had been inadequate and whose work therefore really needed some supervisory control. Although suggestions were made as early as 1579 to institute church visitation, it was not until 1586 at the Synod of’s Gravenhage that it was decided to recommend this work to the Classes. Even then, however, it was left optional in some provinces but in 1618-19 the Synod incorporated the present article in the Church Order and so the work of church visiting became mandatory in all of the churches.

Originally more serious attention was given to this work than is done in our present day. This is evident from the guiding principles set forth by the Synod of 1586 and which today are scarcely ever observed any more. From Rutgers’ Kerkelijke Adviezen we learn that these principles are:

“1. They (the church visitors) shall occasionally listen to the sermons of the minister, not only to find out whether he is pure in doctrine, but also whether he preaches in such a way that the sermons can be for the benefit and edification of the congregation. They shall further investigate whether the minister is diligent in the reading and study of Scripture, and finally, whether the minister makes use of the accepted forms for baptism and other ceremonies.

3. They shall also have oversight over the life and walk of the minister, and find out whether there are any quarrels and disunity in the congregation or other disorders that are detrimental to the life of the congregation and that ought to be removed us quickly as possible.

4. Finally, if with the members of the consistory there are found any faults with respect to the above mentioned instances, they shall first admonish them privately unto improvement and also help them unto that end, and if this is of no avail they shall report the matter to Classis.”

Following these principles, it is evident that the work of the church visitors must aim at the very heart of the life of the church, i.e., the preaching of the Word and in connection with this the walk and labors of the minister. Of course, the other office bearers of the church are not entirely excluded. That the work of church visiting, however, should concern itself mainly with the preaching and other labors of the ministry of the Word follows from the correct assumption that where the preaching is pure and edifying and the labors of the ministry properly and faithfully, executed, other things will also be as they should. The reverse of this is likewise true. Where the ministry does not measure up to the spiritual standard of God’s Word, a resultant state of disorder and spiritual degeneracy will exist in the church. The evidences of this are all too apparent in our day. If then the work of church visiting is topromote the upbuilding of the congregation, it must concern itself mainly with the ministry of the Word.

It is plain, too, from these principles that the church visitors must have a rather broad authority; something that is again lacking in the work as it is practiced today. Yet it follows from the very nature of the task to be accomplished that if this labor is to be effective at all, this authority is essential. They must make an extensive survey of the spiritual condition of the congregation. To them belongs the task of ascertaining whether or not all things are done in the various churches according to the adopted order. It is for them to determine whether the office bearers are faithful in the performance of the duties of their respective offices. Where wrong doing or neglect are found they must admonish and through their advice and assistance see to it that the evils are corrected or report their findings to the Classis so that the latter may then take the necessary steps to see to it that these things are rectified for the welfare of the congregation. Certainly such labor cannot be performed fruitfully unless it is done with a measure of real authority.

Not without reason, therefore, does the 44th Article of our Church Order delegate this important work to at least two of the oldest, most experienced and most competent ministers. The article itself does not state whether the church visitors are to be appointed by the Classis through its president or whether they are to be elected. The latter practice is usually followed but regardless of which method of appointment is followed, the above rule should be carefully observed. The Church Order Commentary points out that in the past frequently young men were appointed who were just in the ministry and who had no special qualification for this work. The result of this was that the work was done in such a mechanical fashion that it was suggested that the questions be proposed to the consistories by a mailed questionnaire. This is simply no work for a novice. Even among the older and experienced ministers, all are not qualified for this task. Rev. H. Hoeksema states that this is a “most difficult work that requires experience, tact and wisdom as well as strong conviction and clear insight into the truth.” Classis, in the interest of all the churches, should be very careful to select those men who possess most of these qualities.

It has been suggested that elders may also qualify for this work. The Church Order Commentary states that “No Classis would violate a principle of Reformed Church polity if it should appoint an elder for this work.” Jansen, in his Korte Verklaring, informs us that years ago some of the provincial Synods of Holland had rules which definitely permitted the appointment of Elders as Church Visitors. Under the present Church Order, however, this is not permissible for it speaks only of “ministers” being authorized for this work. Nor may this be interpreted as though ministers act as church visitors in the capacity of ruling elders and not as teaching elders and so leave the implication that elders may indeed be appointed for this task. Obviously the authors of the Church Order had sound reason to specify “ministers” in this article. As a general rule ministers are more qualified and better trained for this work and this would especially be true when those are selected who possess the qualification that we mentioned before. But we should also remember that the aim of this work is the spiritual upbuilding of the congregation and this is more than asupervisory task to be performed by ruling elders. It is also an instructional work, and therefore properly belongs to the teaching elders!

The term that these visitors serve is, according to the article, continuous. By this we do not mean that they are appointed for an indefinite period of time but rather that the Classis may continue the same visitors indefinitely. Usually they are appointed for one year and then, re-appointed from time to time. The advantage of this is that by repeated visits to the churches these visitors come to more thoroughly know the circumstances and are better able to give advice and assistance in troublesome situations than others who would come to confront these things for the first time. A certain measure of continuity in this work is desirable.

Although the Article itself does not state it, one of the decisions of our churches appended here states that the congregations to be visited must be given at least eight days’ notice of the proposed visit. This must then be announced either from the pulpit or on the church bulletin. This notice is not simply for the consistory involved but for the whole congregation and the purpose of it is to enable the members of the congregation to bring certain matters to the attention of the church visitors. This does not mean that a member who has a complaint can ignore or by-pass his consistory and go directly to the church visitors. Of course not. The orderly procedure must be followed and that usually calls for the consistorial treatment of matters before they can come to either the Classis or the Church Visitors. But suppose that a certain member of the church is dissatisfied with the preaching. He does not charge the minister with false doctrine for then obviously it must needs become a matter of protestt with the consistory but he merely holds that the preaching is characterized by a lack of study, generalities, non-edifying, etc. The consistory is made aware of this but does nothing about it. In such a case the dissatisfied member( s) may bring this matter to the attention of the church visitors who in turn would necessarily have to conduct a thorough investigation if these claims were in any measure substantiated.

Or, to use another example, there might be an unwholesome situation in the congregation that tends to break down the unity and disturb the peace of the church. The consistory may not divulge this information to the church visitors since they do not regard it as serious and it necessitates no disciplinary action as yet. Members of the congregation who may be disturbed about the matter may certainly appear at the meeting of the church visitors to inform them of this so that the matter is thoroughly investigated and remedied for the profit of the church.

Thus we note that the task confronting the church visitors is not one that they can expect to finish in fifteen or twenty minutes. They must be prepared, if necessary, to spend considerable time with a congregation where circumstances may require it.Haste makes waste also in this work.

“Let all things be done decently and in good order!” 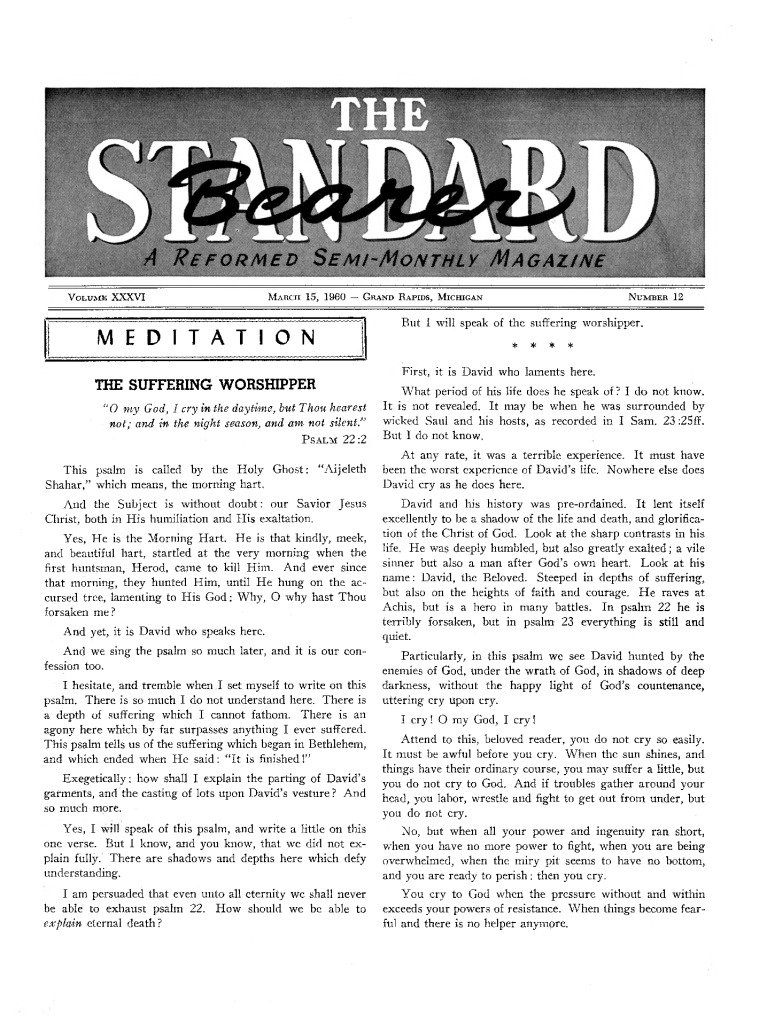