Vol 86 Issue 09 2/1/2010 By: Engelsma, David, in Things Which Must Shortly Come To Pass, The Postmillennial Interpretation of Revelation

Postmillennialism in the Reformed Tradition (cont.)

Contemporary advocates of postmillennialism in Reformed and Presbyterian churches, particularly the disciples of the Puritans and the Christian Reconstructionists, can appeal to a prominent, powerful strand of the Reformed tradition in support of their doctrine of the last things. Unlike premillennial dispensationalism, the other important challenge to Reformed amillennialism, postmillennialism must be taken seriously by the Reformed church in the twenty-first century.

Edwards and the Puritans

In the preceding installment in this series on the doctrine of the last things, I quoted Jonathan Edwards’ postmillennial hope in his The History of Redemption1 as representative of many, though not all, of the Puritans. George Marsden accurately describes Edwards’ (and many of the Puritans) bright view of the earthly future of the church. During the coming millennium, “almost everyone would truly follow Christ. As a result, wars would cease, nations would dwell together as brethren, ‘the wolf should dwell with the lamb.’ There would be ‘vast increase of knowledge,’ and ‘all heresies and false doctrines shall be exploded.’ In short, the triumph of Christ’s kingdom [in the “golden age” of the millennium—DJE] ‘is an event unspeakably happy and glorious.'”2

Edwards called the coming earthly reign of Christ through His church the “church’s latter-day glory.”3

Marsden indicates an important motivation of Edwards’ doctrine of a future millennium prior to the coming of Christ. Edwards was concerned that the number of those who are saved be greater in the end than the number of the lost.4

Typical of the postmillennial Puritans was Edwards’ expectation of a future great revival that would usher in the millennium. In order to bring this necessary revival about by the extraordinary work of the Spirit, Edwards organized a vast, worldwide prayer chain. All Christians everywhere in the world were to pray at the same time that the Spirit would send the great revival.

It is a very suitable thing, and well-pleasing to God, for many people, in different parts of the world, by express agreement, to come into a visible union in extraordinary, speedy, fervent, and constant prayer, for those great effusions of the Holy Spirit, which shall bring on that advancement of Christ’s church and kingdom that God has so often promised shall be in the latter ages of the world.

Edwards concluded that this prayer for the great revival and, thus, for the millennium was a “duty” of all Christians.5

Recognizing that the biblical teaching of future lawlessness in the world and nominal church, of apostasy on the part of churches and professing Christians, of the rise of Antichrist, and of great tribulation for the true church is a “great damp” on millennial hopes and prayer chains, Edwards neatly consigned the realization of all such New Testament passages to the past, specifically, the time of the Protestant Reformation. “This notion [of a future Antichrist and tribulation—DJE] tends to discourage all earnest prayer in the church of God for that glorious coming of Christ’s kingdom, till it be actually come; and that is to hinder its ever being at all.”6 That is, like all postmillennialists, Edwards was, and had to be, at least a “partial” preterist.

A full, consistent preterist in eschatology is one who explains all New Testament prophecies of Christ’s coming and the things attending that coming as having been fulfilled in the past, whether in AD 70 in the destruction of Jerusalem, or in the time of the persecution of the early New Testament church by the Roman empire. A “partial,” inconsistent preterist is a theologian who does exactly what the preterist does with eschatological prophecy, except for the prophecy of the coming millennium and the prophecy of the bodily return of Christ—especially the prophecy of the coming millennium.7

It was not only the Puritans in the broadly Reformed tradition who taught postmillennialism. Prominent, influential Dutch Reformed theologians also advocated a coming “golden age” for the church before the return of Christ. Wilhelmus Ã Brakel looked for “the glorious state of the church during the thousand years prophesied in Revelation 20.”8 Ushering in this glorious, earthly state of the church, Ã Brakel held, will be a “conversion of the entire Jewish nation,” involving “a restoration of the nation [of Israel], not only in a spiritual sense, but also in a physical sense”; the return of the Jews to Canaan; and the literal rebuilding of the earthly city of Jerusalem.9

Waxing ecstatic over the prospect of the “wondrous increase in the measure of grace,” the “great numbers” of converts, and the fine earthly state of the church worldwide in the millennium, as well as of the grand, earthly kingdom of the Jews in Canaan, Ã Brakel exclaimed, “Oh, what a glorious time this will be!” Wistfully, he added, “Who will then be alive?”10—a question that ought to have made him reexamine his postmillennial eschatology. Are all the Old Testament saints and the multitudes of New Testament Christians who will have died before the millennium to miss out on the most wonderful realization of the kingdom of Christ?

Postmillennialism has also been the eschatology of Scottish Presbyterians. Writing in the middle of the nineteenth century, David Brown explained the millennium of Revelation 20 as that time in the future, prior to the return of Christ, when the biblical prophecies of the coming glory of the Messianic kingdom will be fulfilled in “their full earthly sense.” According to Brown, there will be a “universal reception of the true religion, and unlimited subjection to the scepter of Christ,” so that all the religions of the pagans, the “imposture” of Islam, the false religion of the Jews, and the superstition of popery will be abolished. There will be universal, earthly peace; “much spiritual power and glory” because of a more copious outpouring of the Spirit; “the ascendancy of truth and righteousness in human affairs”; and “great temporal prosperity” for true believers and ungodly alike. As is invariably the case with the postmillennial vision, the beginning of the millennium will be the national conversion of Israel.11

Presbyterians in the US

Presbyterians of stature in the United States have also espoused postmillennialism. On the basis, significantly, not of Revelation 20 (the passage that speaks of the thousand-year period), but of Revelation 19:11-21, the vision of the conquering Christ, northern Presbyterian Benjamin B. Warfield forecast a “golden age before the Church,” prior to the return of Christ. It will be “at least an age relatively golden gradually ripening to higher and higher glories as the Church more and more fully conquers the world and all the evil of the world.” Such will be the church’s victory over evil, in Warfield’s mind, that he left it an open question whether the millennial “winning of the world implies the complete elimination of evil from it.”12

The southern Presbyterian Robert L. Dabney shared his northern colleague’s view of the last things. “Before this second advent, the following events must have occurred. The development and secular overthrow of Antichrist…which is the Papacy. The proclamation of the Gospel to all nations, and the general triumph of Christianity over all false religions, in all nations…. The general and national return of the Jews to the Christian Church.” Dabney called these future events “this state of high prosperity” for the church on earth. He evidently saw this “prosperity” as the meaning of the millennium of Revelation 20, since he appealed to the chapter in support of his expectation of it.13

5 Edwards, Praying Together, 26. The emphasis is Edwards’.

11 David Brown, Christ’s Second Coming: Will It be Premillennial? (Grand Rapids: Baker, repr. 1983), 424-440. The emphasis is Brown’s. As the subtitle indicates, much of the book is also an incisive, helpful criticism of premillennialism. John Macleod says of Brown’s book that it was “perhaps the most influential book” of that period in Great Britain on the return of Christ (John Macleod, Scottish Theology, Edinburgh: Banner of Truth, repr. 1974, 278). Brown was obviously heavily influenced by the postmillennialism of Jonathan Edwards. 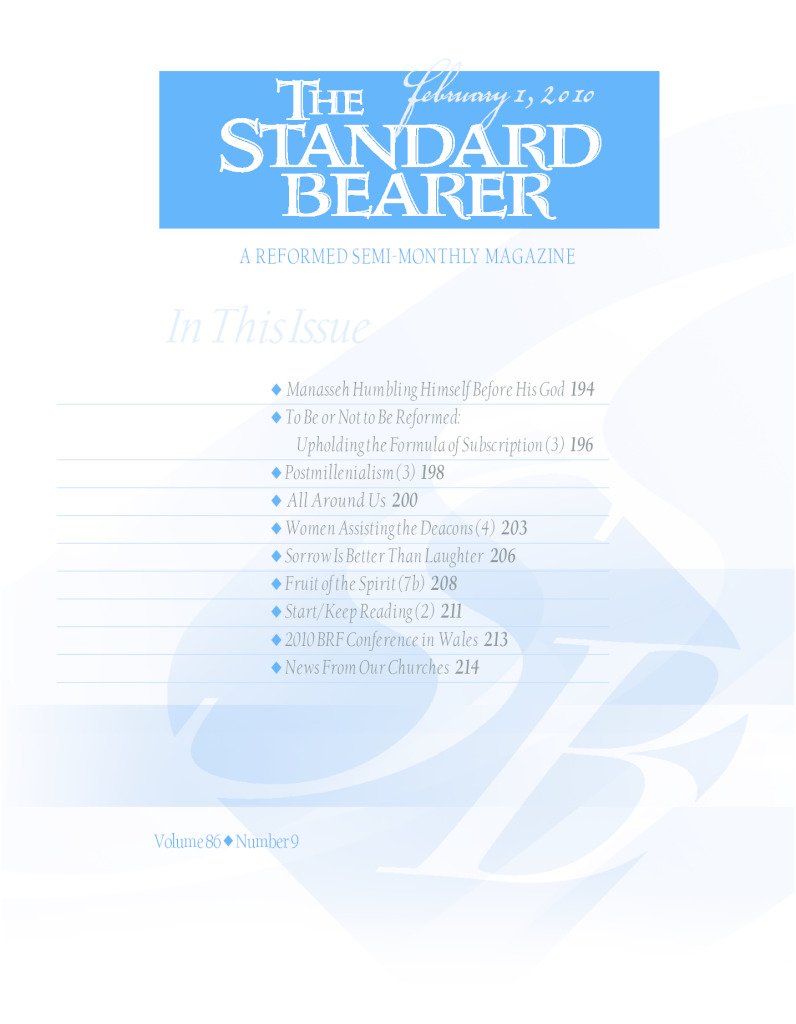