The third of the Three Forms of Unity commonly adopted by Reformed churches of Dutch extraction is usually known as the Canons of Dordrecht, or the Five Articles Against the Remonstrants. The full original title of this symbol reads as follows: “Judgment of the National Synod of the Reformed Churches of the united Netherlands: held in Dordrecht in the year 1618 and 1619. Which was assisted by many excel­lent theologians of the Reformed Churches of Great Britain, the Electoral Palatinate, Hessia, Switzerland, Wetteraw, Geneva, Bremen and Emden: Over the well-known five heads of doctrine, concerning which difference appeared in the Reformed Churches of said United Netherlands. Expressed on May 6, 1619.”

Whether, therefore, you judge from the shorter, more commonly used names of this confession, or from the complete title as given above, it is clear that, as is usually the case with the official standards of a church, there is a history involved in the formulation and adoption of our Canons. And here too, as again has frequently been the experience of the church in the past, the history is one of a very severe, lengthy, oft-times dark, life-and-death struggle for the “faith of the gospel”. To understand the Canons properly it is necessary briefly to review the history of that struggle which gripped the Reformed Churches of the Netherlands in the years preceding the famous National Synod of Dordrecht.

We are wont to call the heresy condemned in the Canons after the name of that learned but undeniably crafty and deceitful Hollander, Jacob Harmsen, or, as his better known Latinized name has it, Jacobus Arminius. The Remonstrants are Arminians, and their error is known as Arminianism. However, we do well to understand that Arminius was not the originator of the Arminian heresy, on the one hand, but that he was led by and learned from others. And on the other hand, it was not even Arminius per­sonally who was condemned by the National Synod: for by the time our fathers served the antidote to the poison of Arminism in 1618-19, the man who gave his name to the errors of the Remonstrants had long since passed from this earth into the realm of the dead. And yet, as we shall see, it is not without reason historically that the errors rejected in our Canons are popularly known as Arminianism.

The Reformation in the Netherlands, which co­incided with the liberation of the Lowlands from the Spanish dominion, bore a distinctly Calvinistic char­acter. This does not mean that all the Netherlands was Reformed, however. The Lutheran Reformation had its adherents also in the Netherlands, though few in number; and there were as well small numbers of other sects, such as the followers of Menno Simons. Besides, there were many so-called “crypto-Catholics” and Libertines, men who wielded influence in high places in the Dutch government. Nevertheless, the Reformed Churches occupied the center of the ecclesi­astical stream in the Netherlands. And, while one could hardly call them the State Church, nevertheless they existed with the blessing of the government, were financially supported by the government, and were also partly under the control of the political authori­ties as far as their church polity was concerned. It was this latter relationship that gave rise to much of the trouble in which the churches were involved dur­ing the period before 1618. For the Arminians found much support and protection from the government, while for a time the faithful officebearers and member­ship of the Reformed Churches were actually perse­cuted by the state and local authorities. Nevertheless, the Reformed Churches, as we said, represented the cause of the Reformation in the Netherlands, and were decidedly Calvinistic, both as to doctrine and as to church polity. And long before the adoption of the Canons, the Heidelberg Catechism and the Confessio Belgica had been recognized by them as their official standards.

It was not long, however, before the old bogey of Semi-Pelagianism made its appearance once more, now in the very churches whose existence had largely been occasioned by a desire for the sincere milk of the Word instead of the diabolical poison of the free will of man. In fact, it is amazing how soon after the beginning of the Reformation the churches fell away from the pure truth of the gospel to which they had sworn allegiance when the tie with Rome had been cut. Think of it: it was only a century after Martin Luther had nailed his theses on the door of the church at Wittenberg, and not even a hundred years since the undaunted Genevan Reformer had flaunted Rome’s power, when the Arminian errors appeared not only sporadically, here and there, upon the scene of Dutch Calvinism, but threatened seriously to split both state and church wide open, and necessi­tated a National Synod, which should with bold strokes cut down the devils of heresy which assailed the precious heritage of the truth from their very ranks! For remember, it was no minor affair that necessitated the Synod of Dordrecht. Certainly, the truth itself was at stake; and from this point of view the struggle between Remonstrants and Contra-Remonstrants is of fundamental importance. But the very life of the Reformed Churches hung in the balance in the years preceding the famous synod. Shortly before the synod gathered, there were at least a hundred ministers in the Reformed Churches who, having themselves fallen victim to the Arminian wiles, were victimizing the sheep of God’s flock and deceiving the simple. Numerous cases there were,—due to the fact that the Remonstrants enjoyed the protection and favor of the government,—in which whole congregations were de­nied official standing before the state, were dispossessed of their property, and were forbidden to gather in meetings for public worship under penalty of fines, imprisonment, or banishment. Thus was the gold of the Reformation quickly bedimmed in the land of our forefathers. Or thus it seemed at least. For all that glitters is not gold. And God’s purpose was to re­fine the real gold, and cause it to shine with still brighter luster.

It is not our purpose to give a detailed account of the development of Arminianism in the Reformed Churches of the Netherlands. Whole volumes have been written on that subject¹, and besides, this is not the place for such an account. We merely mean to focus the attention on the highlights.

And then it stands to reason, paradoxical as it may sound, that Arminius was not the first Arminian. For, in the first place, the errors which plagued the Reformed Churches in those years undoubtedly may be traced back to Rome. There can be no question about the fact that the Reformation movement was not entirely pure in the Netherlands. Just what the occasion and motivation of such impurity was we need not discuss here, except that a study of the history indicates that the admixture of national patriotism and religious zeal appears in many ways to have worked to the disadvantage as well as the advantage of the Calvinistic movement in the Lowlands. This latter fact, it seems to me, partly occasioned the ap­pearance, at a very early date, of leaders in the Reformed Churches who had never made a clean doc­trinal break with Rome and who soon, flying under the Reformed flag, manifested in their preaching and writing that they were not at all rid of the poison of Semi-Pelagianism. Some of these men were ex-priests or erstwhile monks who had, due to circumstances, been rather readily received into the ranks of the Reformed clergy. Especially men like Johannes Anastasius Veluanus and Hubert Duifhuis were influ­ential in preparing the way for the Remonstrance.

But to Coornhert (1522-1590) belong the highest honors on this score. He very sharply opposed Calvin’s presentation of the doctrine of predestination, and, in fact, at that early date was proposing only a very broad confessional basis, like the Apostles’ Creed, upon which the churches might untie and avoid a mul­titude of denominational divisions. It was a study of Coornhert’s views which later on became the occasion for Arminius’ defection from the Reformed line. Other outstanding men among the forerunners of Arminius were Caspar Coolhaas, Herberts, Wiggerts, Sybrandi, and Adolph Venator.

Nevertheless, to Jacobus Arminius belongs the questionable honor of having united these erring ele­ments and having formed them into a party in the churches which soon became powerful. And of his person and works we must say a bit more.

Arminius was born in 1560 at Oudewater. Early in life he was left fatherless, but won the favor of two Reformed ministers, Taffin and Petrus Bertius, who sponsored his education at the then small Academy of Leiden. At the age of twenty-one he had finished his studies at Leiden, and now he was sent, under the sponsorship of a merchants’ guild at Amsterdam, to study at the University of Geneva. There he came under the influence of Beza, Calvin’s successor, and heard that theologian’s explanation of the epistle to the Romans, as well as his views on election and reprobation. History shows, however, that he never absorbed the teachings of Beza. It was also at Geneva that the young Arminius became the bosom-friend of Wtenbogaert, whom we shall meet later in our account of the Remonstrance. After a brief visit to Italy, where if anything Arminius’ in­clination to a very broad concept of Christianity was strengthened, he returned to Geneva for a time, but soon made his way back to Amsterdam, where he passed his classical examination and was admitted to the ministry by unanimous vote. 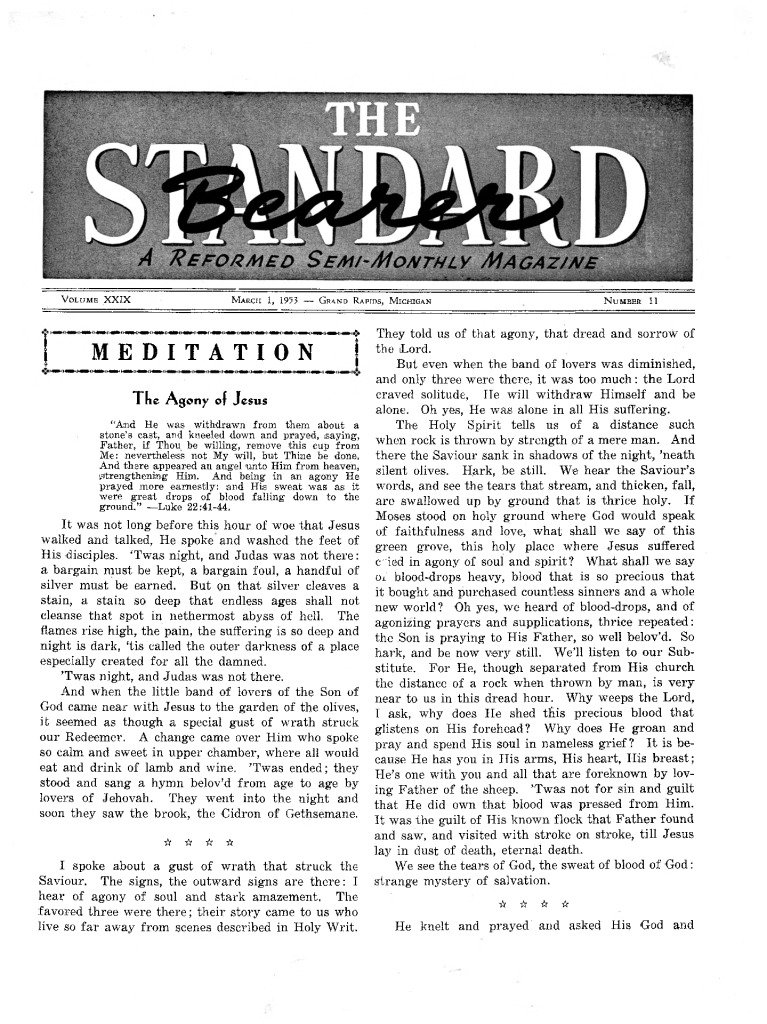