The Word of God in II Corinthians 6:14-18 tells us in clear and simple yet forceful language to come out from among the unbelievers, and to be a separate people, rather than to be unequally yoked with them. We read, “Be ye not unequally yoked together with unbelievers: for what fellowship hath righteousness with unrighteousness? and what communion hath light with darkness? And what concord hath Christ with Belial? or what part hath he that believeth with an infidel? And what agreement hath the temple of God with idols? for ye are the temple of the living God; as God hath said, I will dwell in them and walk in them; and I will be their God, and they shall be my people. Wherefore come out from among them, and be ye separate, saith the Lord, and touch not the unclean thing; and I will receive you. And I will be a Father unto you, and ye shall be my sons and daughters, saith the Lord Almighty.”

And the evidence that membership in the unbeliever’s labour union is such an unequal and sinful yoke is before our very eyes. The mere act of joining such a labour union is a sinful act in that we thereby agree to depart further from the words that proceed from the mouth of God. For in joining the unions of the world one is required either to swear allegiance to the constitution of that union or to make a pledge of loyalty to that union. And this at once is setting one’s feet on the way of further sin. And even joining with: out such a promise is supporting its wickedness financially and morally.

In most unions an oath is required such as this one, to be found in the Book of Laws of the International Typographical Union, pages 15 and 16, “I hereby solemnly and sincerely swear (affirm) that I will not reveal any business or proceedings of any meeting of this or any subordinate union to which I may hereafter be attached, unless by order of the, union, except to those whom I know to be in good standing thereof; that I will, without evasion or equivocation, and to the best of my ability, abide by the Constitution, By-Laws and the adopted scale of prices of any union to which I may belong; that I will at all times support the laws, regulations and decisions of the International Typographical. Union in preference to others; that my fidelity to the union and my duty to the members thereof shall in no sense be interfered with by any allegiance that I may now or hereafter owe to any other organization, social, political or religious, secret or otherwise; that I will belong to no society or combination composed wholly or partly of printers, with the intent or purpose to interfere with the trade regulations of influence or control the legislation of the union; that I will not wrong a member, or see him or her wronged, if it is in my power to prevent. To all of which I pledge my most sacred honor.” There are several items herein that constitute an agreement to disregard and disobey the words of God. But before we treat them let us also consider the milder form of such an agreement.

Now the point is not that swearing an oath or making a solemn promise to the unbeliever is sin. But it is exactly that which is promised and sworn to in these constitutions that clearly indicates that no believer may become a member of an organization that demands all this. Let it be noted that in the oath listed above one swears allegiance to man rather than to God, to man’s word rather than to God’s Word, and to man’s laws, regulations and decisions rather than to God’s. There is nothing so neutral about the so-called neutral unions. They are instead anti-God and antichristian. For the oath quoted demands allegiance to the union’s Constitution and members rather than to any religiousorganization, and thus rather than to the Church and to her King! In this oath and pledge one promises to go along with and to defend all and any action and decisions that the union may in unbelief decree. God and His religious organization, the Church, are not given a lower position in the life of the union member. They are ruled out completely by the oath. In that oath and pledge one agrees to be loyal to the unbelieving union member rather than to the brother in Christ. In this it seeks to alter the enmity between the seed of the woman and that of the seed of the serpent, of Genesis 3:15, by enticing the seed of the woman into the camp of the seed of the serpent, and then in that camp to demand opposition to other seed of the woman. How can that be according to the words that proceed from the mouth of God? One had better read carefully any oath or pledge demanded by a labour union before he dares to sign it and take membership in that union. Dare a Christian support such wickedness?

And you, who argue that membership in these antichristian unions is necessary and permissible because we have that command of God to provide for our families, promise to make it impossible for the brother in Christ (who will for conscience sake refuse this unequal yoke) to keep his calling to provide for his family. Does God, indeed, approve of membership in the antichristian unions who cause their members to make it impossible for their “brethren in Christ” to fulfill their calling to provide for their families? May you do that to your fellow believer when, for sake of conscience, he cannot join that antichristian union? Read Romans 14:20-23 before you take such an awful step!

The clearest evidence of all that you do swear and promise to go further in defiance of the words that proceed from God’s mouth when you join such a labour union is in the strike clause in the constitution, in the actual practice of the strike, and in the oath and promise to go on strike, if it becomes necessary for the union to get its demands. For all this is a violation of the fifth commandment. It does not render honour to those in authority over us, when we come withdemands and when we enforce these demands with coercion and threats. For the laborers to come unitedly with a request carefully written and revealing with factual evidence the need for a change in working conditions or the wage scale is one thing. Demanding of one who is in authority over you is quite another thing; and that other thing is refusal to honor him as the authority. The child who demands of his parents fails to honor them as father and mother. The employees who demand of their employer elevate themselves above the employer and deny him his God-given honor. The one who demands is the one who claims authority over the one of whom it is demanded.

This is a magnified evil in the strike, for then the demand is enforced with a threat. In the strike the employee assumes the position of being the authority. For by the strike he declares, “You cannot take my job away; but I can do you much harm by stopping production for you. I, together with those laborers with whom I am yoked, will decide who may and who may not be employed here in this establishment. I deny you the right to hire someone in my place!” Where, in all this, is the honour God’s word demands of the employee?

No one denies the employee in our system the right to refuse to work for an unjust and cruel employer. Let him quit and seek work elsewhere, if his unreasonable master will not heed his reasonable requests. He is a servant but is not a slave. And the very fact that he had to apply for the job indicates that this employer is the authority and that he who applies is the servant. Before God the unjust treatment of the employer does not alter this to cause the employee to be justified in assuming the rights of the employer.

Listen to these words from the mouth of the Lord; and you will find the strike (and the union that advocates and practices it) condemned as the way of death rather than of life. “Let every soul be subject unto the higher powers. For there is no power but of God: the powers that be are ordained of God. Whosoever therefore resisteth the power, resisteth the ordinance of God: and they that resist shall receive to themselves damnation. Owe no man any thing, but to love one another: for he that loveth another hath fulfilled the law. Let us walk honestly, as in the day; not in rioting and drunkenness, not in chambering and wantonness, not in strife and envying.” Romans 13:1, 2, 8, 13. And did you note the words damnation, law, rioting, strife and envying?

Or again, in Ephesians 6:5-8, “Servants, be obedient to them that are your masters according to the flesh, with fear and trembling, in singleness of your heart, as unto Christ; Not with eye service as men pleasers; but as servants of Christ, doing the will of God from the heart; With good will doing service, as to the Lord, and not to men. Knowing that whatsoever good thing any man doeth, the same shall he receive of the Lord, whether he be bond or free.” And Paul is not giving his own ideas. The Spirit moved him and likewise Peter, whose words we find in I Peter 2:18-20 to be very appropriate, “Servants, be subject to your masters with all fear; not only to the good and gentle, but also to the forward. For this is thankworthy, if a man for conscience toward God endure grief, suffering wrongfully. For what glory is it, if, when ye be buffeted for your faults, ye shall take it patiently: but if, when ye do well, and suffer for it, ye take it patiently, this is acceptable with God.” Surely this word from God’s mouth does not approve of going on strike against the froward but demands patience while suffering wrongfully.

And when property is ruined and violence is done to man, the sixth and eighth words from God’s mouth in His law have also been violated. And even though you committed no violence and damaged no one else’s possessions, or even served on a picket line, you are guilty of all these sins which you fellow members committed. You yoked yourself with them and promised to uphold them in all their actions, even over against the Church, her King and her principles. Protest now you cannot. Your calling is only to resign and confess that you erred in yoking yourself unequally with these unbelievers. You many not give financial support to such evil!

Think it over prayerfully. Consider it seriously. And listen to one more word from God’s mouth, “What shall it profit a man, if he shall gain the whole world, and lose his own soul?” Mark 8:36-38.

Without earthly bread man cannot retain his earthly life. But without the words from God’s mouth he cannot live in the new Jerusalem. Either we seek the kingdom of God and its righteousness, and God adds to us the things of this life and spend an everlasting existence outside of that kingdom.

Is the whole world full of bread worth exchanging for these words from God’s mouth? “Well done thou good and faithful servant: thou hast been faithful over a few things, I will make thee ruler over many things: enter thou into the joy of thy Lord.” Matthew 25:21 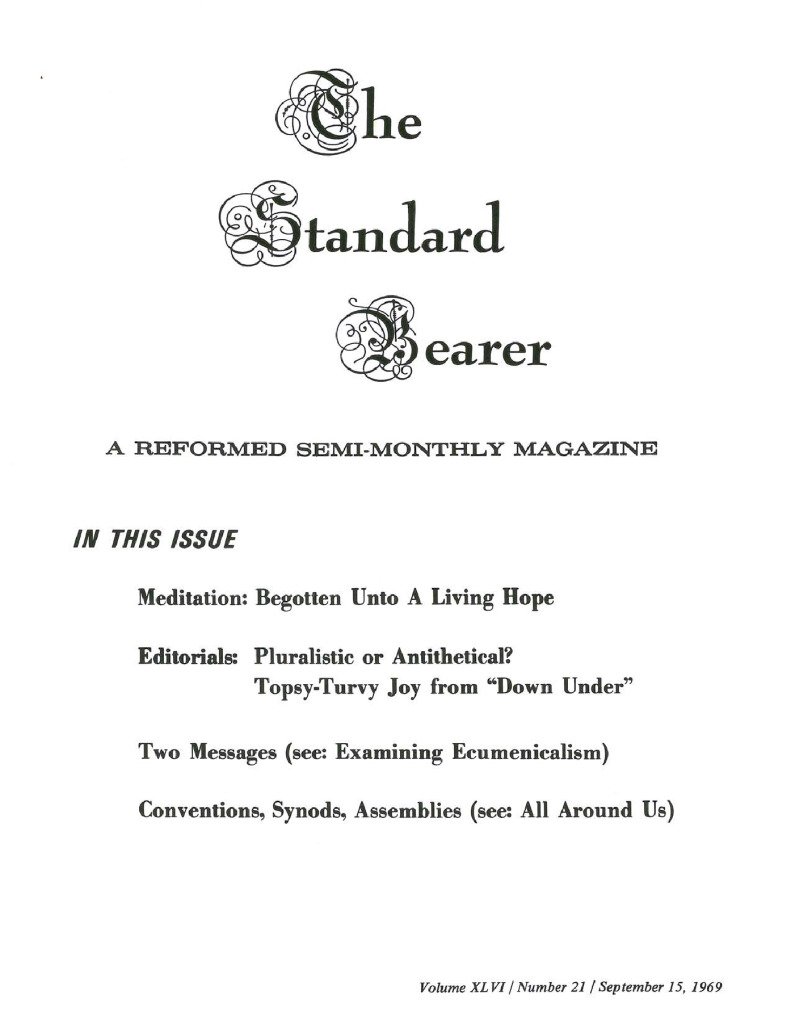