This paperback is an Eerdmans re-publication of a book first published in 1728. William Law, the author, was born in 1686, a time which puts this book in the era of dead orthodoxy in England. And it is this dead orthodoxy which is challenged by the book. Law writes in protest against the external religious practices of the day and calls the church to live a holy and devout life in keeping with their outward confession.

The book is wholly practical, without any attempt being made to defend and develop the truth of Scripture. This is also an objection which has been raised by others against it. This objection is answered by Geoffrey W. Bromiley’ who insists that this was the type of book required by the times. While this is perhaps true, it nevertheless remains a serious defect in the book since the Christian’s life from a practical point of view is rooted in, and therefore can never be divorced from, his confession of the truth.

While the book is of considerable value and contains many pointed insights into the dangers of hypocrisy (a large part of the book deals with prayer), it has strong ascetic and mystical tendencies. One also wonders what Law’s theology really was. E.g., he writes on p. 306: “The greatest spirits of the heathen world, such as Pythagoras, Socrates, Plato, Epicetetus, Marcus Antoninus, etc., owed all their greatness to a spirit of devotion.

“They were full of God; their wisdom and deep contemplations tended only to deliver men from the vanity of the world, the slavery of bodily passions, that they might act as spirits that came from God, and were soon to return to Him.”

The value of the book is to be found especially in the glimpses of the spiritual state of the church in Law’s lifetime and in this period of English church history.

This Bible Story Book, written by a daughter of Catherine Vos whose own Bible Story Book is perhaps better known, is not recommended to our readers. The least of its faults are sometimes strange explanations for the miracles: this explanation is offered of the miracle of changing water into wine: “This was the first miracle Jesus did. Do you know why I think He did this first? It was because He wanted us to know that we must serve Him first of all in our daily lives. You do not have to go to Africa as a missionary to serve Jesus. Perhaps some day He will call you to go to Africa. And if He does, He will give you the special rewards He has promised to all those who leave family and home for His sake. But you must not wait till that day comes to start serving Him. He wants you to love Him, and obey Him, and to enjoy Him too, right now, beginning today, at home, at school, yes, and in your play and fun, and even at your parties”; a not always accurate presentation of the history; a confusing introduction into the book of stories from the Old Testament. The worst of the faults is a constant play of Arminian theology of the worst sort. So bad is this that I would not want my children even to read the book.

All of which points to the fact that there is an important place yet to be filled for a good Bible Story Book which can be of general use in our homes and which will be a means to instruct our children in the marvelous truths of Scripture. It is to be hoped that some day someone will take upon himself or herself the writing of such a book.

If some society wanted to study the minor prophets in their historical setting and as far as their chief thoughts are concerned, this book could serve as an introduction. It is somewhat brief and sketchy, but written from a conservative viewpoint and contains information which gives to these little known prophets attention which they deserve. Recommended.

This book is intended to be a study manual. It contains a short biography of John Calvin, a brief history of Calvinism, a discussion of the principles of Calvinism (chiefly God’s sovereignty), and a discussion of perspectives of Calvinism: the church’s political task, educational task and calling towards separate Christian organizations. Each chapter has a list of questions added intended to stimulate discussion. If any of our young people’s societies are looking for material for after recess programs, it would be well to consider this book. It is also a handy book for reference, usable by anyone interested in the broader questions of Calvinism.

This book is a biography of a man who was undoubtedly not only a leading theologian in the churches in the Netherlands but a leading figure in the entire life of the Gereformeerde Kerken. But this is more than a biography. When we remember that Bavinck’s life-span extended from 1854 to 1921, that this was a critical period in the history of the Reformed Churches in the Netherlands, and that the Reformed movement in this country especially in those years was very strongly and directly influenced from the Netherlands, then we can understand that the biography of Bavinck is at the same time, — be it from a very definite viewpoint, —the history of the Reformed movement in the Netherlands, and that it is very important for the understanding of that period of history. Something of this is expressed in the title of the book also: for it speaks of Bavinck’s “Tijdgenoten, ” contemporaries . The author explains this part of the book’s title by pointing to the’ fact that Dr. Bavinck’s contemporaries played an important role in his life. However, it is equally true that Dr. Bavinck played an important role in the lives of his contemporaries, including Dr. Abraham Kuyper, Sr.

The book is interestingly written, and it is also well documented. And it furnishes many an interesting insight into Bavinck’s character and into the behind-the-scenes aspect of his life and activities, as well as of his-contemporaries. In fact, it rather amazes me how much of his private correspondence is made available to the public in this book.

I would call this book ‘a “must” for anyone interested in Dutch church history or in the Dutch background of the Reformed movement in America. In fact, I would like to see a book like this translated and published in our own language. But perhaps the market would not be large enough to warrant this. Perhaps a few well-chosen photographs would have added some value. 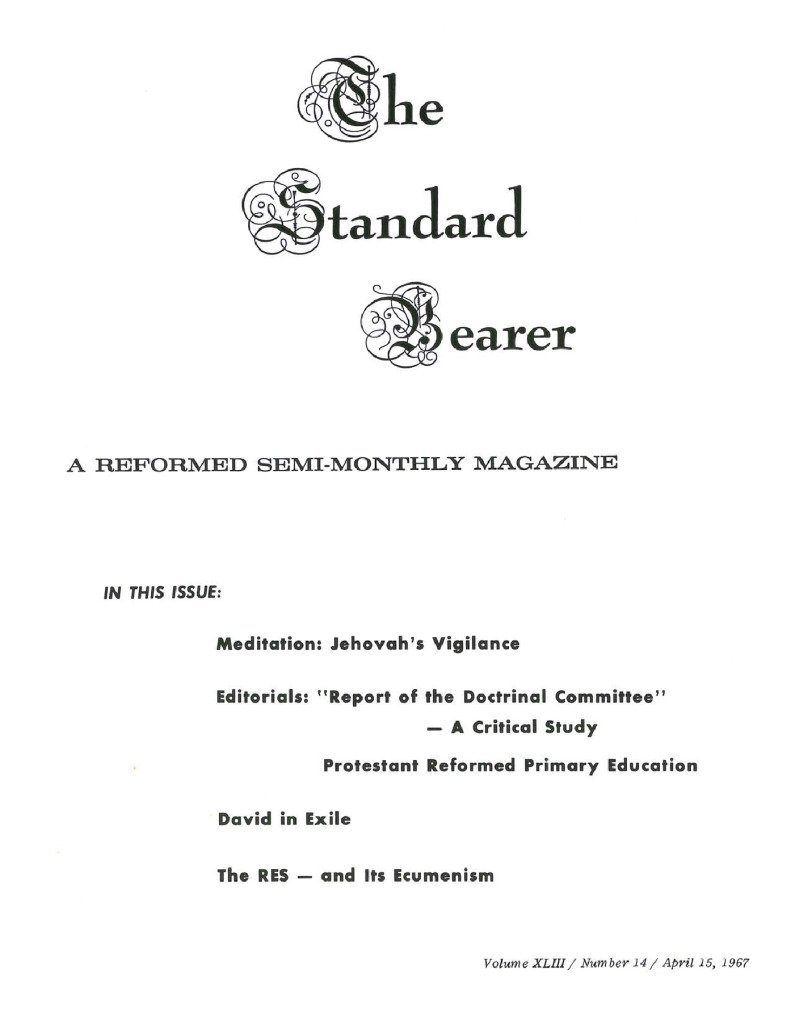