THE PATTERN OF SOUND DOCTRINE

In this chapter we will begin to consider that there is a most intimate and necessary relationship between having good, biblical hermeneutics, as we noticed in the teaching of Jesus after and before His suffering and death, and adhering to the pattern of sound doctrine, and the pattern of sound words of truth. Without the former, the latter is nonexistent; this is as true as it is clear that day follows night.

Such will be the burden of this chapter!

When we speak of the pattern of sound doctrine we are not, first of all, interested in counting words and syllables; nor are we interested in an “isolated passage” of Scripture such as we find in Daniel 9:27 orRevelation 20:2, 7, but we are interested in the total message of Scripture, the Gospel of God, as this can be and is pointed out by Scripture itself. We are profoundly concerned, when we ask after the “form of doctrine” (Rom. 6:17b), as to what the Holy Spirit would have us understand by these words. And then we must read this statement in the light of the immediate context, and in connection with the truth of Scripture which is being revealed to us in a given passage. We must have good, sound exegesis! We must and may not put our own content and meaning into the terms!

There are various passages in the New Testament where the term “form,” “pattern” occurs. And these are all employed by Paul in his letters to the churches as the Apostle to the Gentiles.

It is in the Epistle to the Romans that Paul shows us something of this “pattern” or “form” of “doctrine.” We refer, first of all, to what he writes in Romans 6:17b. He is here speaking to the “called in Jesus Christ, to all that be in Rome. . .” (Rom. 1:6-7). He speaks as one who is a debtor, by virtue of his apostolic office, both to the Greeks and to the Barbarians, both for the Jew and the Greek (Rom. 1:14-16). And Paul writes the great truth of the promise that Abraham is not merely the father of those who are of the circumcision, but he is the father of all who walk in the steps of that faith of our father Abraham, which he had being yet uncircumcised (Rom. 4:12). The sign and seal of the righteousness of Abraham’s faith makes a distinction between Jew and Jew, and designates that only they are heirs who walk as did father Abraham. Thus spoke Jesus to the Jews in John 8:39: “If ye were Abraham’s children, ye would do the works of Abraham.”

And the doctrine to which we have been delivered, whether believers, Jew or Greek, is that God has saved all His own by one man, Jesus Christ. The entire human race died and perished in one man, Adam, and the entire church is saved by one man, Jesus Christ (Rom. 5:12-20). And so marvelous is that grace that where sin abounded, grace did much more abound (Rom. 5:20). And now we are no more under law but under grace! And grace makes us cry out against the accusation that “we sin more that grace abound,” with the exalted “God forbid!” We are no more slaves of sin, but we are free-born sons of Sarah, born from Jerusalem, which is above (Rom. 6:2, 14; Gal. 4:23, 5:1).

Such is the pattern of “sin and grace” to which we have been delivered. We have now no other willing choicebut to serve the Lord, not in the oldness of the letter, but in the newness of the Spirit. We are delivered, given over into a new bondage of liberty to serve God, as sons and daughters of the living God.

Now this does not yet indicate that especially Premillennial Dispensationalism has discarded this “pattern or form of sound doctrine.” Our purpose here is to demonstrate clearly that when we speak of a pattern of sound doctrine, it must be quite clear that we are rightly dividing the word of truth, and rightly setting forth the doctrine itself, so that we see in it a consistent Gospel-pattern.

Such is the basic keynote in the foreword, covenant- word, of Exodus 20:1: “I am the Lord thy God. Who have brought you forth from the land of Egypt,” the house of spiritual bondage!

But let us press on.

There is a certain form of the heavenly tabernacle of God with man all through the Scriptures. Moses is shown this “pattern” on the holy mount at the time of the law-giving. The Builder and Maker of the heavenly temple shows Moses exactly how to fashion the temple, its furniture, as the house where God dwells with His people in covenant fellowship. All is “according to the pattern which I shewed thee on the mount.” Moses is reminded expressly by the Lord concerning this “pattern”; Moses must follow this pattern very exactly and meticulously. This is true of the entire structure of the tabernacle, its rooms, its furniture, as an earthly picture of heavenly realities (Heb. 9:9).

This meticulous following of the instructions of Jehovah concerning the pattern of the heavenly is also followed in the building and construction of the temple by Solomon (I Chron. 28:11, 12, 18, 19). And, to be sure, in the picture of the temple shown in the heavenly vision to Ezekiel, the matter and truth of the exactitude of the pattern of the heavenly. is. underscored. In Ezekiel 43:1-12we have a beautiful and instructive Word of God for the “house of Israel” in the captivity of Babylon. Truly, the temple is destroyed, the walls are broken down, and the city lies in ruins. But God is going to rebuild a temple of the pattern of the perfection of holiness. It will be filled with “the glory of the LORD” (Ezekiel 43:4, 5). And all shall be “most holy” (Ezekiel 43:12).

Yes, notice this pattern of the temple!

It is not the pattern of a mere earthly tabernacle of Moses, nor of the Solomonic temple as planned by David; but it will be the “place where I will dwell in the midst of the children of Israel forever, and My holy name shall the house of Israel no more defile, neither they, nor their kings, by their whoredoms, nor by the carcasses (dead bodies) of their kings in their high places.”

And then Israel must be shown these things concerning that glorious future temple. It is the temple which Jesus built as the great temple-Builder (John 2:19; Hebrews 3:5, 6). Yes, that temple shown to Ezekiel in the vision is the perfected church in glory, in which Christ shall be glorified in the saints (II Thess. 1:10a).

Such is the pattern of the temple!

And the entire church, the Israel of God must see this house; and, seeing it, they must confess their sin in the obedience of the Gospel. They will then need to “measure the pattern”! All is exactitude in God’s holy temple. It is the holy God coming to dwell with His people in everlasting covenant; the tabernacle of God shall be with man.

And now we must pause here just a bit, and reflect on the import of this for the preaching of the Word, and for good Hermeneutics which lies at the basis of sound preaching and exposition of the Scriptures. The question is then not, first and uppermost, concerning a merely literal interpretation of certain words, names, and phrases as this pertains to historic Israel in the prophecies, but it is really the basic question of the form of doctrine as this is rooted in the great pattern which God shewed Moses on the Mount at Horeb.

It is to understand that this “tabernacle” is really a picture of God dwelling with His people in all the glory of grace, so that Israel will not die. That is why, when Moses will ascend to the top of the mount with Joshua, he first receives the Theophany of the living God, at the occasion when he read the “words of the LORD, and all the judgments” to the people. Yes, then Moses took the blood and sprinkled it on the people, and said “behold, the blood of the covenant, which the LORD hath made with you concerning all these words” (Exodus 24:8).

And then we read something amazingly wonderful. It is the wonder of grace at the time of the lawgiving. We read, “And they saw the God of Israel, and there was under His feet as it were paved work of sapphire stone, and as it were the body of heaven in its clearness, and upon the nobles of the children of Israel He laid not His hand: they also saw God and did eat and drink” (Exodus 24:10, 11).

Do you see the pattern here of the heavenly?

It is the pattern of grace, sovereign grace in the blood. God did not, according to His awful glory, cause them to perish who saw God through the blood of the covenant! (Exodus 19:21).

That is the pattern of sound doctrine. Such is the form of doctrine to which we have been delivered, whether in the Old Testament shadows in hope, or in the New Testament in Christ’s blood. Yes, Jesus thus interpreted all the Scriptures to the travelers to Emmaus on the evening of the resurrection day. It was thus from Moses and all the Scriptures that Jesus expounded unto them the things concerning Himself!

And such opening of the Scriptures makes the hearts of the saints burn within them in holy joy and peace (Luke 24:32).

Truly, all this calls for hewing to the line in exact preaching according to the pattern of sound words (II Tim. 1:13).

Unto this we have been delivered.

Let us “measure the pattern,” and let all the house of Israel know that God has made this Jesus, crucified, both Lord and Christ (Ezekiel 43:10; Acts 2:36). 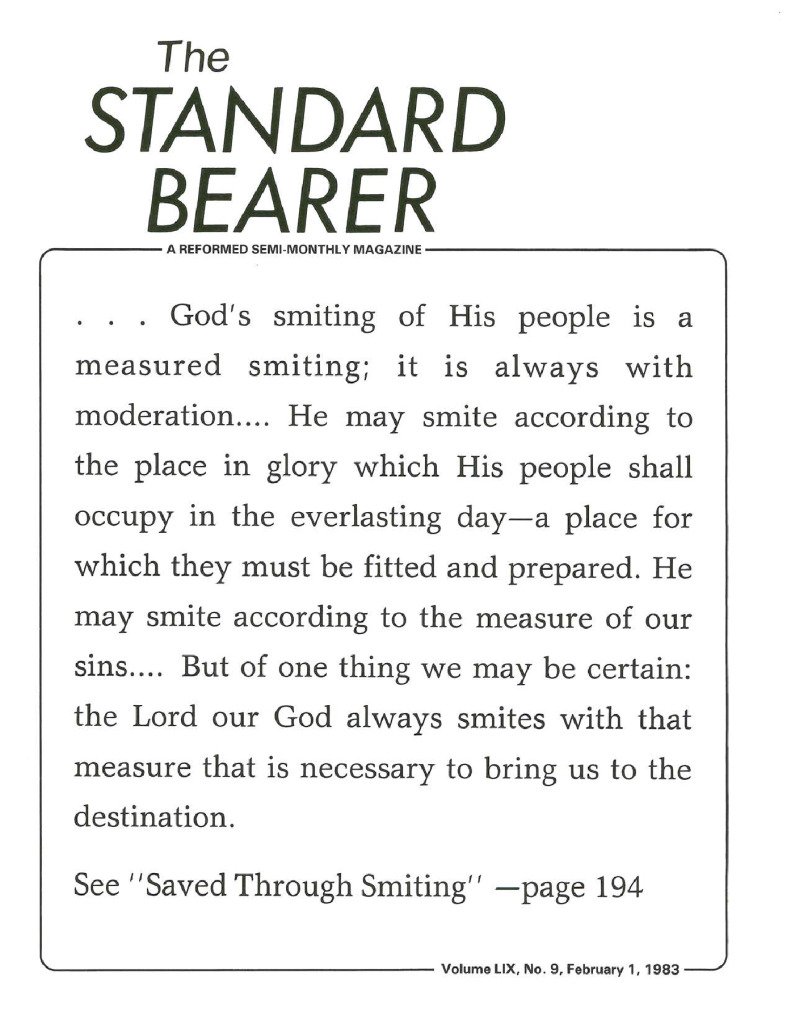