1. To Whom Must the Contention of the Appeal Be Proved?

Under this subheading we are concerned with the question whether, when an appeal is made to an ecclesiastical body, the appellant must prove his contention to the satisfaction of the body to which the appeal is directed or whether it is sufficient that he proves to himself that the decision questioned is contrary to the Word of God or the Church Order. That is the question!

With respect to this matter there have been and still are two conflicting opinions among the exponents of Reformed Church polity. The one contends that before submission to any ecclesiastical decision can be withheld, the body that made the decision must be convinced of its wrongness. The other holds to the view that one who is convinced in his own mind that a certain decision is in error is not bound, even for one moment, to submit to the same. This difference of interpretation has more than once occasioned sharp conflict in the church of Jesus Christ. Both sides have certain patterned arguments to bolster their position with the result that although there are two seemingly opposite views here, both sides claim to maintain the same church order and find support for their views in the same article. The advocates of the former view reason that their view is the only tenable one because by it decency and order are maintained in the church. If decisions of the .Classis and Synod were not binding upon any individual or consistory that might choose to disagree with them, anarchism would prevail. Everyone would then do as seemeth good in their own eyes and there would be no law and order in the churches. The very power of the ecclesiastical assemblies is then broken and the usefulness of the entire church order destroyed. Furthermore, it is argued that on the basis of the 31st. Article of the church order itself, this position must be maintained since it speaks of decisions taken by majority vote as being considered “settled and binding” and this would be meaningless and contradictory if any member of the church could be loosed from it by simply expressing disagreement with it.

On the other hand, those who favor the latter view, deny these claims and point out other things favoring their position. They reason that the main thrust of Article 31 involves the greater duty to be obedient to God rather than to man. Decisions of the church are made by man and, consequently, if one is convinced in his own mind that a certain decision is in conflict with the Word of God, he cannot allow himself to be bound by that decision even for a time. This would make an appeal against the decision impossible for in order to do so he would have to submit until such time as his appeal is heard. This he cannot do for this would be binding the conscience and no man may permit his conscience to be bound by anything other than the authoritative Word of God irrespective of the consequences. Furthermore, unless freedom be allowed for the individual right of protest without the suppression of the conscience, we impose upon the church order a most gruesome form of hierarchy which is contrary to all Reformed principle.

In evaluating these positions, it is our view that they are not as conflicting as they may first appear to be. Both of these views contain an element of truth but neither one expresses the right position fully. It is an over simplification of the problem involved to merely assert an “either or” position in the matter. On the one hand it is certainly true that the binding character of ecclesiastical decisions must be maintained. If this is not done, the whole structure of ecclesiastical machinery is destroyed. On the ether hand, the right of the individual or individual church in federation with the denomination must be maintained. This is a fundamental principle of the Reformation that is clearly inscribed in Article 31 of the Church Order. To violate it is an evil that will inevitably lead to most serious consequences.

An interpretation must be sought in which both of these elements are preserved. This, we feel, can be done by plating a proper limitation upon the idea of “submission.” What is meant by “submitting to an ecclesiastical decision until an appeal is heard?” The article itself does not speak of “submission” as such but it is implied in that it states that “whatever may be agreed upon by a majority vote shall be considered settled and binding.” Now if this is to be the case, those affected by the decision must “submit.” If then this submission is interpreted to mean that one must bow absolutely to what has been decided even to the extent of acknowledging that the decision is correct ethically, the defenders of the second view cited above have a vital argument and Article 31 is painfully in need of radical revision so that the consciences of the individual may be freed from tyrannical hierarchy.

If, however, “submission” be interpreted to mean acknowledgment of a legally made decision and recognition of the fact that said decision, unless revoked, is binding upon the churches and every member thereof, the argument falls away. Such acknowledgment does not involve a violation of the conscience. The very fact that one appeals indicates disagreement and is evidence of conscientious objection. Lack of or failure to appeal indicates submission in the sense that one is consciously bound to agree with the decision.

Furthermore, it should be remembered by the appellant, however, that the right of appeal is not a license to rebellion. He must understand that in the event he is unsuccessful in his attempt to get the undesirable decision rescinded, he is duty bound to submit and if the matter is of such momentous consequence that this is for him an ethical impossibility he must sever his connection with the church and seek affiliation with another that does not bind his conscience. He may not live in rebellion in the church, refusing to submit to her authority and doing as he pleases irrespective of her decisions any more than a citizen who may disagree with the propriety of a twenty mile speed zone ordinance in a certain area, appeals to the authorities without success, may continue to ignore the law and drive his automobile through the area at forty miles per hour.

Hence, the appellant must prove to the ecclesiastical body the incorrectness of its decision. He does not have to do this to himself for of this he is already convinced as is evident from the fact of his appeal. If he fails to prove to the satisfaction of the ecclesiastical body, the decision taken remains “settled and binding” for him and then he is confronted with two alternatives: (1) Submit to the decision or, (2) sever his connection with the church for conscience sake.

Majority vote, in distinction from plurality vote, means that more than half of the total number of votes cast favor a certain measure making it a binding decision. Plurality vote denotes that the largest number of votes decides an issue which in some instances may be done with less than half of the votes. Thus, for example, there may be three candidates for a certain office. Let us say that one hundred votes are cast. The first candidate receives thirty votes, the second forty-five votes and the third twenty-five. By plurality vote the second candidate is elected although none of the candidates received a majority vote which, in this instance would be a minimum of fifty-one votes.

The church order in Article 31 speaks of “whatever may be agreed upon by a majority vote.” Some conclude from this that no decision of any kind may be made except by majority vote in the ecclesiastical assemblies. There is only one kind of vote in the church that is recognized and that is the vote of the majority, viz. one over half. Others disagree with this (land obviously also with the. Church Order) claiming that the only vote that is proper in ecclesiastical circles is that which is unanimous. All must be agreed on every issue so that there may be harmony and unity in the church. If this is not the case, debate on the question must be extended until all are convinced one way or the other. In this form, this position is as impractical as it is foolish. One member of an assembly could retard all of its progress and make impossible every decision. In a slightly altered form, however, it may contain a very worthy element. In the early assemblies of Reformed Churches of the Netherlands, two votes would be taken on every issue. The first was merely for the purpose of determining the opinion of the majority. Assent to this was agreed by the minority and, consequently, a second vote was taken for the purpose of making the expressed opinion of the majority the unanimous decision of the entire gathering. Thus matters would literally be agreed upon by common consent.

Occasionally this method is still used when a congregation calls a minister of the Word. The usual trio is made by the consistory and the congregation is called to vote. One is elected by majority vote and then another vote is cast to gain the common consent of the entire congregation. The call-letter is then made out in which is stated that N.N. has been chosen by unanimous vote. Another significant example of this method being used is the adoption of our Church Order by the Synod of the Reformed Churches of Holland, held in Emden in 1571. This is evident from Article 86 which states: “These articles . . . have been so drafted and adopted by common consent.”

The rule of majority vote prevails in our churches. In article 5 of the “Synod’s Usages and Rules” it is stated: “All motions shall be carried by majority vote.” Interesting in this connection is the action of the Synod of 1957. The committee appointed the previous year to draw up some Parliamentary Rules submitted its report. The committee of pre-advice treated it. This latter committee advised Synod in one instance (Art. VII, 9) where the report reads: “majority of Synod” to change this to read “two thirds of Synod” and in another instance (Art. VII, 10) where the report reads: “requires a two-thirds majority” to change it to read “requires a majority.” In the first instance the Synod rejected the advice of the committee while in the second instance she adopted the committee’s advice and therein consistently maintained the former rule: “All motions shall be carried by majority vote.”

It is undersigned’s opinion that the majority rule must be maintained in all matters involving policy and doctrine but sees no violation of any ecclesiastical principle if the two-thirds rule or three-fourths rule is applied to matters that are strictly parliamentary. 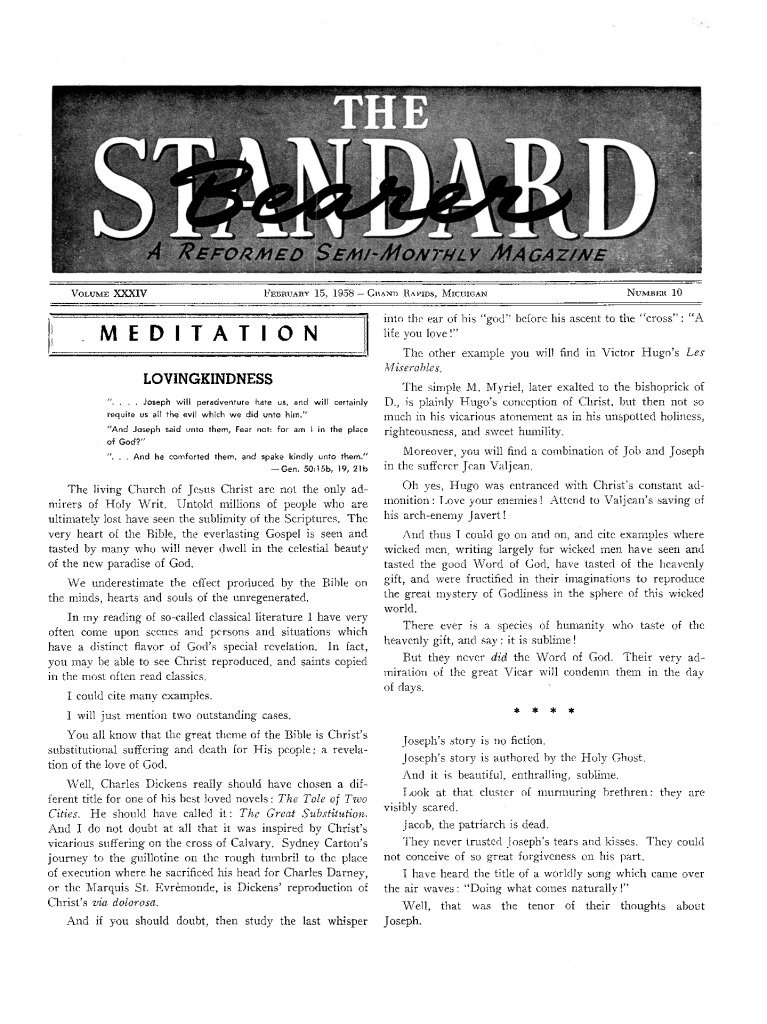