THE CHURCH AND SOCIAL FUNCTIONS

According to a recent report, a Methodist Church in Sydney, Australia, has opened a special kind of night-club for teenagers. No liquor is sold in the night-club, but popular teenage musicians are hired to entertain the crowds; the young people dress as they like, eat hamburgers and sip soft drinks, watch television, dance, play table tennis or billiards, and in general have a good time.

Rev. Peter Van Tuinen, in The Banner, raises the question in connection with this report, “What is the church?” He writes,

The Sydney experiment is a rather spectacular case, but it illustrates a very common and insidious fault in the thinking of many church people; namely that the church must compete with the world in the matter of entertainment. Society meetings are evaluated on the basis of their entertainment value, and potential members of the church societies choose something more entertaining. They should rather frankly recognize that they are not choosing one form of entertainment over another, but choosing entertainment in preference to edification and the exercise of Christian fellowship. Catechism classes, of course, are dull as compared to a basketball game or a movie, but those who make such a judgment overlook the fact that the church is not trying to entertain but to instruct and to edify. Some religious and evangelistic movements have sought to win people by interspersing entertainment and gospel, or even by reducing an evangelistic or religious meeting to an entertaining spectacle. The results are not likely to be spiritually edifying, but rather to encourage the attractive idea that life in all of its aspects ought to be entertaining.

There is no doubt about it that people are entertainment-wild today. Consider the vast amounts of money that are spent just to “have fun.” No doubt this is partly due to the fact that people in general have plenty money to spend on luxuries, that they have plenty leisure time in which they seem to think they must be entertained. But another factor seems to be that people are becoming intellectually and spiritually lazy. It is difficult, if not impossible, to get people to think about anything which requires intellectual effort. And it is indeed much easier to be occupied by entertainment that requires no mental strain or concentrated attention. These influences of worldliness and the craze for entertainment have their effects also upon the church and the covenant seed of the church.

It is also no doubt true that people are more and more seeking to be entertained in their churches. This brings up another interesting point that has come to my attention several times in recent years. The architecture of church buildings has reflected this growing trend towards the church becoming a social center. Of course, in the general sense of the word, architecture, because it is one of the arts, has always reflected the ideas and ideals of its times. And, more particularly, church architecture has reflected the spiritual life of those who worshipped in the churches, their confessions and beliefs. We need only think of the Middle Ages when the peasants, reduced to the lowliest of circumstances in daily toil and drudgery, nevertheless were eager to help in the construction of the great cathedrals; for in their building of them, they expressed their hopes and longings and they watched them grow and worshipped beneath the lofty domes and soaring spires. Also in the Reformed Churches since the time of the Reformation, the architecture of the churches has, as a general rule, reflected the fact that to those who stood in the tradition of the Reformation, the center of the church life was their worship of God and the preaching of God’s Word. For this reason, the auditorium marked the central and most important part of the church building; the pulpit with the Bible occupied a place of instant attention; the adorning of the building was strictly in keeping with the need to inspire the congregation to worship.

But in many churches this emphasis has changed. And this change is reflected in the architecture of the buildings. No longer is the preaching of the Word of God and the assembly of the congregation to worship the center of church life. Rather the church has become a social center, a meeting place of various people, a place of entertainment and business, of administration and social occupations. I recall a church I was in some time ago which rather startlingly emphasized this. Although there were several thousand people on the rolls of the church, the auditorium, newly built, seated only about 600, and, I was told, it was seldom more than half full. Yet the church building and the neighboring parish house were large. There were lounges with rugs and upholstered furniture, kitchens, banquet halls, offices for all kinds of administrative. personnel, offices for a minister of music, a minister of psychiatry, a social worker or two; there were separate rooms for a library, for pastoral counseling, a rather elaborately equipped first aid room with medicine chest and stretchers and cots, spacious rooms for brides and attendants, a chapel capable of seating about one hundred people for weddings and other minor meetings. I suppose it is only a logical conclusion that presently the church will have its own “night-club,” its own basketball courts and bowling alleys. But the church has then also forgotten its reason for existence—its calling to do nothing else but preach the gospel of our Lord Jesus Christ. Conspicuously lacking are facilities for the instruction of the covenant seed of the church in the truth of God’s Word, places for society meetings where the study of Scripture is the primary activity and the auditorium as the chief part of the entire building where the congregation faithfully comes together on the Sabbath Day to worship God in the communion of the saints. No longer can the modern church sing with the sweet singer of Israel, “I was glad when they said unto me, Let us go into the house of the Lord. Our feet shall stand within thy gates, O Jerusalem. Jerusalem is builded as a city that is compact together: Whither the tribes go up, the tribes of the Lord, unto the testimony of Israel, to give thanks unto the name of the Lord.” Psalm 122:1-4.

In the January issue of Moody Monthly, an interesting article appears which tells of missionary work by the Mormons among the Navajos. The Mormons are being eminently successful in their missionary work, claiming to date some 8000 converts. The appeal of the Mormons is primarily due to the fact, according to this article, that the Mormons teach that the Indians of America are direct descendants of the lost tribes of Israel. According to the Mormon story, contained inThe Book Of Mormon, translated by Joseph Smith who was the founder of the movement, a group of Israelites escaped from Jerusalem about 600 B.C. at the time of the capture of Jerusalem by Nebuchadnezzar. These migrants traveled across Arabia to the shores of the Persian Gulf where they built a ship and set sail eastward through the Indian Ocean and the Pacific Ocean, finally landing on the west coast of South America. This group was the basic nucleus from which has come the Indian tribes of the Western Hemisphere including all the Indians of our own country.

Because this has appeal to the Indians, and because the Mormons pose as the only ones who have real knowledge of Indian origin, these people have had unusual success in persuading the Indians to join their sect. According to, this same article in Moody Monthly, most ethnologists (experts in the field of the origin and development of the races) are agreed that the Indians did not descend at all from Shem and the Jews. They are for the most part Mongoloid—related to the yellow race, or the result of a mixture of Mongoloid and Negroid. Besides, so the article maintains, it is generally agreed that the tribes of Indians found in America came in separate migrations, none earlier than 500 B.C. and some as late as 500-1300 A.D. At least some of them came from Asia via the Alaskan route.

But the Mormons are bound to their views by the infallible inspiration of the Book of Mormon which was translated from some old plates supposedly found by Joseph Smith in a hillside near the Smith farm at Palmyra, New York. The plates are now in charge of the angel Moroni and the translation has become a part of the Mormon Bible. The Mormons would have to repudiate their belief in both Joseph Smith, the angel Moroni and the Book of Mormon if they did not maintain their views that the Indians are descendants of the Israelites.

One is reminded of the words of Jesus to the Jews, equally applicable today, “Woe unto you, scribes and Pharisees, hypocrites! for ye compass sea and land to make one proselyte, and when he is made, ye make him twofold more the child of hell than yourselves.” Matt. 23:15. And yet—much of what goes under the name of missionary work in other church circles can be characterized in the same way.

From Christianity Today we quote the following:

Thirty-four Lutheran congregations are applying for membership in a new church body to be known as the Church of the Lutheran Confession. All but 2 of the 34 formerly belonged to the Wisconsin Evangelical Lutheran Synod. They object to some of the synod’s doctrinal practices and to its continuing relations with the Lutheran Church—Missouri Synod in the Synodical Conference of North America.

Congregational Christian Churches favor merger with Evangelical and Reformed Churches by a margin of about twenty to one, according to Dr. Fred Hoskins, co-president of the United Church of Christ which is being formed out of the merger. Hoskins says that of 1427 local congregations which have voted on the proposed merger, 1358 have given assent. A number of large Congregational churches have declared their opposition to the union, however, including historic Park Street Church in Boston.

A pastor in the Church of Sweden was fined 75 crowns ($14.50) last month for refusing to perform a second marriage for a divorced person. The Rev. Alf Hardebn of Oeja was sentenced under a law which compels ministers of the national Lutheran church to marry all couples wishing a church wedding even if the partners are divorced people.

According to The Banner, there have been recent reports of persecution in Colombia once again in which Protestants have suffered. In Barrancabermeja, Protestants were attacked by vicious armed men. In San Gil, a band of unknown men smashed the doors and wooden window blinds of a Protestant meeting place and poured rifle and pistol fire into the building for approximately an hour. Although there were thirteen people in the building, they all escaped unhurt. Handbills stating “I am a Catholic” were distributed that morning to be posted on the front doors of homes. The meeting place that was shot up had no such card. In Suaita, unknown men forced their way into a Protestant home, struck a mother’s head with machetes, smashed furniture and damaged other furnishings, tried to ruin plantian trees and garden crops outside. The mother succeeded in getting to her pastor’s home and was taken for treatment. There are places in the world where persecution of the church goes on. 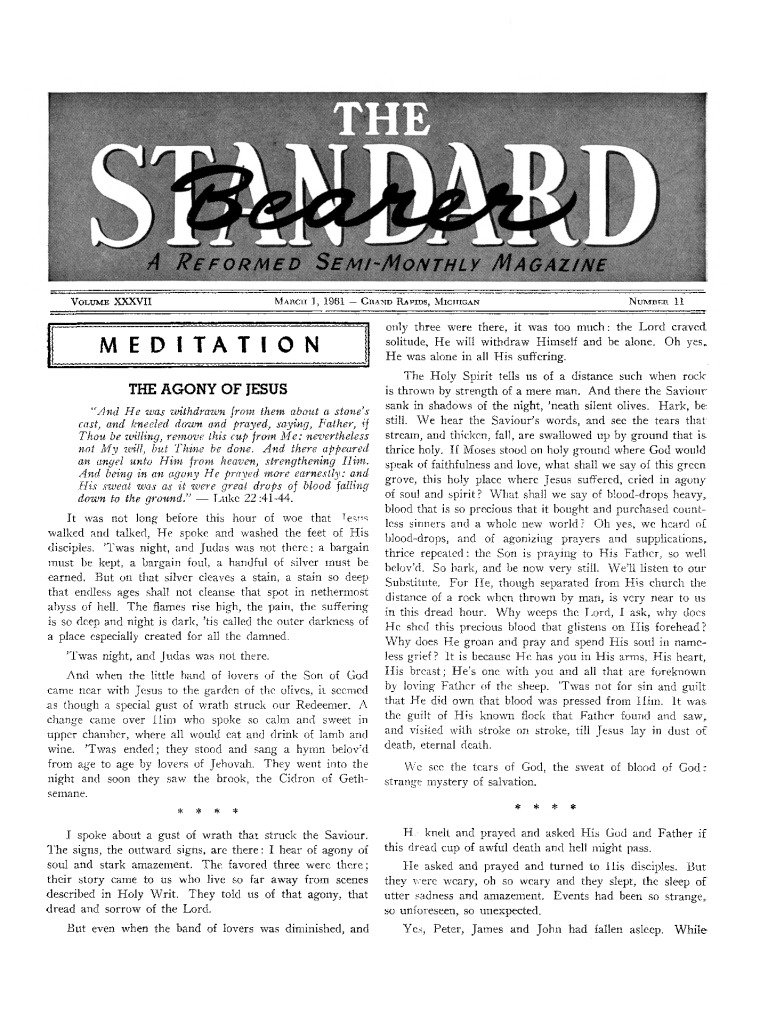