Two issues ago in The Standard Bearer we reported the matter of an overture from Rev. M. Gritters in which he sought an early Synod of the Churches who left us for the purpose of discussing the question of an immediate return to the Christian Reformed Church. Classis West approved of this overture and contacted Classis East to make the arrangements for such a Synod. Classis East concurred in the decision of Classis West and this early Synod met in Grand Rapids October 26 through October 28.

The grounds given for this request were three in number. Briefly summarized, they were: 1) Such a basis for union will have a wholesome effect upon other efforts to unite with other Church bodies in the strivings of the Church world towards ecumenicity. 2) To unite in any other way will probably result in the splintering of the Churches since all their people are not prepared to return. 3) The Declaration of Unity, read at the opening of each Synod, mentions that the Church stands on the basis of Scripture and the Three Forms of Unity, and that these Churches who agree to this Declaration “desire to receive into (their) communion everyone that agrees to (their) confession.”

The conclusion of the matter is, therefore, that the movement to return to the Christian Reformed Church failed on the synodical level. Those men of the Churches who left ours and who were in favor of such a return were defeated on the Synod by a tie vote.

One cannot help but think of the historical irony of it all, for in the Synods of 1952 and 1953, just preceding the split in our Churches, the functioning of the Synod was hampered also by such a tie vote. At that time, Classis West opposed the Declaration of Principles and stymied the entire Synod by repeated use of the tie vote. Now their own efforts to return to the Christian Reformed Church are ham-strung by the same tie vote they once used.

Although the efforts to return synodically failed, it was evidently clear on the Synod that this would not prevent those ministers and elders and people who wanted to return from carrying out their wishes. If they cannot return synodically, they will certainly return individually. Hull, for example, already informed their Synod that they had made overtures to Classis Sioux Center of the Christian Reformed Church to return to them.

It is also evident from the letter addressed to the Christian Reformed Church, in which they speak of the danger of splintering their denomination by returning without a retraction of the Three Points, that there are many of their people who will not go back to a denomination that maintains the heresy of Common Grace. The tragedy of the whole matter is that these people are being forsaken by their leaders—sheep without a shepherd. We know that seven years have gone by since these people have left us, and seven years of history have been made. But we hope and pray that they may still see that their only hope for themselves and their children is to return to us.

Finally, we cannot understand completely why there is hesitation on the part of their Synod to return to the Christian Reformed Church. On a previous Synod they stated that they no longer consider the Three Points to be Arminian and Pelagian. This they again reiterate in their last letter. “We reiterate our stand, expressed in our letter of 1960, that we no longer charge the Three Points with being Arminian and Pelagian, nor are we pleading for freedom to agitate and to cause turmoil and strife in the churches. We are opposed to agitation, propaganda or any unseemly or revolutionary action in the church. We are sorry for such actions of the past as we have pointed out in our letter of 1960.” If the Three Points are not Pelagian and Arminian, they must be Reformed. If they are Reformed, they must be the truth of Scripture. If they are the truth of Scripture, what could possibly stand in the way of Synod’s embracing them and returning again to the Church from which they were expelled because of them? That one statement that they are not Arminian destroys the last barrier to organic church union. I cannot see any other conclusion.

Church Membership in the United States

Several periodicals have recently carried articles which contain statistics of the recently published “Yearbook of American Churches for 1961” published by the National Council of Churches.

These statistics show that although the population of the United States has increased 1.8% during 1959, Church membership arose only .4%. Total Church membership in this country now stands at 112,226,905 in 254 different religious bodies. The Churches gained 2,669,164 new members, with 63.4% of the total, population of the United States now belonging to some Church or other. There are 62,543,502 Protestants, 40,871,302 Catholics, 5,500,000 Jews, 20,000 Buddhists. The Catholic Church has shown a considerably larger rate of growth than Protestant Churches since Catholics are up 3.4% over last year, while Protestants are up 1.7%. The largest group of Protestant Churches is the Baptist group with 20,879,220 in 27 denominations, while the largest single denomination is the Methodist Church with 9,815,460 members.

It is striking, to say the least, that along with this growth in Church membership there has been a much greater and even alarming rise in crime and juvenile delinquency. The sale of all kinds of obscene literature has also risen sharply in recent years, while all forms of entertainment, as it degenerates morally, is at an all time high.

Anyone can notice, even on his way to Church on Sunday, that in spite of the increase in Church membership, there is little observance of the Sabbath left. We live in an age in which people feel the need of belonging to some Church, but to whom Church membership means nothing. We live in times of increased crime and evil, days in which men are entertainment-mad, a period of doctrinal lethargy and sloth, spiritual decline and moral degeneracy. And all this while Church membership continues to soar. One cannot help but think of the words of Paul to Timothy, “This know also, that in the last days perilous times shall come. For men shall be lovers of their own selves, . . . Having a form of godliness, but denying the power thereof: . . . Ever learning and never able to come to the knowledge of the truth.” II Timothy 3:1, 2, 4, 7.

There has been a growing trend in our day for denominations and for councils of Churches to make pronouncements on all kinds of political, moral and social questions. When these Churches come together in their broadest gatherings, or when committees of various Councils of Churches meet, they cannot resist the temptation to pass motions which spell out their position on all and every kind of issue.

Within the recent past, the National Council bf Churches raised a storm of protest and controversy with its decision to go on record as favoring the admittance of Red China into the United Nations.

Recently more Churches have followed this general trend. The largest Lutheran body in the United States—the 2,500,000-member United Lutheran Church in America—held its 22nd biennial convention in Atlantic City recently. This convention is briefly reported inTime magazine. Among other things, 700 clerical and lay delegates decided against the testing of nuclear weapons, calling for “such forms of peaceful cooperation and competitive coexistence with the Communist world as will oppose and seek to overcome the totalitarian concept of control.” Also they rejected the resolution calling for a ban on capital punishment by the slender margin of 248 to 238.

The United Church of Canada which was formed through mergers of the country’s Methodists, Congregationalists, and some 70% of its Presbyterians, and which numbers better than 1,000,000 members, passed similar resolutions. They condoned birth control, suggested that Canada align itself with the world’s neutralist nations, renounced nuclear war, reaffirmed their opinion that the Canadian government should give recognition to Red China and support its admission into the United Nations, urged the abolition of capital punishment.

Decisions such as these must be a reflection of the preaching on the pulpits of much of the Church world. Less and less is the Word of God heard from the pulpits of the land, and more and more do ministers with the evident approval of their consistories and congregations speak rather on every conceivable kind of social and political problem, while moralizing in general and vague ways for the “betterment” of their constituency.

It is no wonder that the spiritual decline of Church life in the world and specifically in our own country is hastening. The Church has only the one calling to preach the Word of God. And in as much as it fails to do this, it loses its right to be called Church. It is really no wonder that people no longer care to go to Church while keeping their names on the membership rolls. It is no wonder that a cold and deathly materialism has gripped the Churches of America. It is not at all surprising that indifference and lethargy, tolerance and ambiguity have fallen like a pall upon the Churches about us. The Church has no business making pronouncements and resolutions concerning all these matters, and continues to do so to her own grave peril.

Our fathers, with good reason, included in our Church Order Article 30 which reads, “In these assemblies (consistories, classes and synods) ecclesiastical matters only shall be transacted and that in an ecclesiastical manner . . .”

While all these Churches are deathly afraid of the interference of government in the Church-life, and while they cry loud and long-for the separation between Church and state, they continue themselves to deny this principle in practice, and, meddling in the affairs of the state, they try to take over the reins of government and make decisions affecting domestic and foreign policy.

Our Churches must ever be on their guard that they do not fall into this deadly habit of making decisions on matters other than ecclesiastical. And this will be done, if from our pulpits our ministers continue faithfully to preach the Word of God and apply the eternal principles of that Word to the lives of God’s people, so that they know that they must walk here below as citizens of the kingdom of heaven. 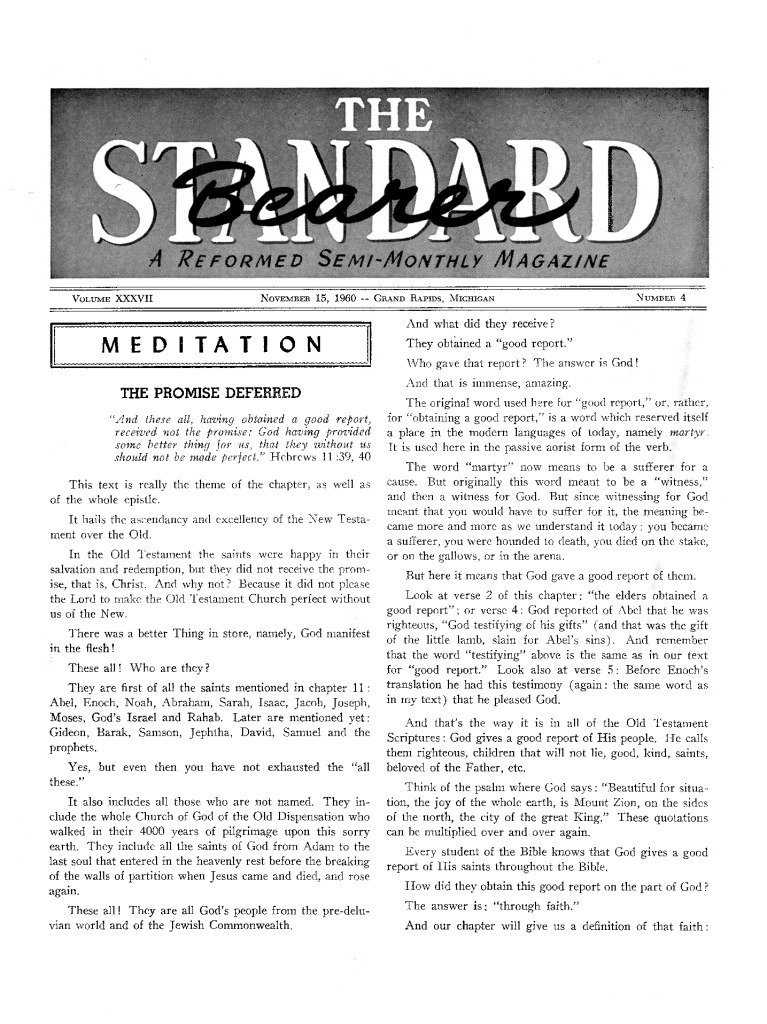