During the course of the past few months we have been privileged to receive into our respective fellowships the families of the Rock Valley Prot. Ref. Church (De Wolf group). The congregation held a final communion service on January 52, 1961. Since then they have disbanded and the majority of these families have united with the Chr. Ref. church of their choice in Rock Valley. We are indeed thankful to our God that the breach which has existed for many years has been healed. We heartily welcome the brethren back into our fellowship with the prayer that we may be a blessing to them and that together we may build and promote the kingdom of Christ to his glory.

From a report of Classis Grand Rapids East:

The requested and recommended colloquium doctum with Rev. L. Doezema of the local Protestant Reformed Church (De Wolf group) was scheduled for next May.

There is a considerable interest in our churches as there ought to be concerning the spiritual and doctrinal strength of denominations other than our own. This interest extends not only to various denominations in our own country, but to churches in other countries as well. Recently, our Mission Committee has begun a broadcast in Europe which is transmitted from Monaco and is beamed particularly to the British Isles. No doubt our people have wondered somewhat concerning the church life of the people across the sea—whether there is yet a Reformed Church movement in Britain and whether there is spiritual interest in the truth of Scripture.

In the last issue of Christianity Today there is a rather extensive report concerning religous life in the British Isles written by Gilbert W. Kirby, General Secretary of the Evangelical Alliance with headquarters in London.

In the first part of his article Mr. Kirby weighs the relative strengths and weaknesses of the church life in Britain as a whole. In doing this the report is very pessimistic. There is mostly bad news to report.

There were many in England who had hoped that the crusades of Billy Graham held in 1954 and 1955 would result in a religious awakening. But this did not happen. And, although other crusades followed those of Graham conducted by other evangelists, nevertheless they have had little effect on Britain’s spiritual life. Mr. Kirby writes:

The nation as a whole remains indifferent to spiritual things. Nearly 99 percent of London’s teenagers and more than 99 percent of all British people do not regularly attend any place of worship. In many areas there is virtually no effective evangelical witness. It is not uncommon to see places of worship shut or used for other purposes. One can enter churches with a seating capacity of 1,000 and find a dozen in attendance.

. . . In many churches a spirit of apathy accompanies the work of the Gospel, while in others worldliness cripples their spiritual impact. One is conscious of growing disregard of the Lord’s Day. Excursions and special outings more and more commonly are arranged on Sunday, and parents tend to motor their families to the coast week after week during the summer. To meet this situation many churches have transferred Sunday schools from afternoon to morning hours.

. . . Probably the most tragic factor of all is that the churches of Britain have lost their touch for the most part with the industrial classes. Those who do go to church are largely drawn from the professional classes. There is a noticeable preponderance of womenfolk in most churches. It is not difficult to find packed congregations here and there, but almost invariably these are in better-class neighborhoods. Churches in the industrial areas are for the most part virtually empty.

There is one good entry on the other side of the ledger according to Mr. Kirby:

Probably the most encouraging feature of the post-war era has been the growth of Christian youth movements in various churches. The number of young people who spend their summer holidays in camps and house parties where they receive not only physical and mental relaxation but real spiritual blessing is phenomenal. Christian Unions at the major universities have grown numerically in the post-war years. Furthermore, there has been a remarkable increase in the number of Christian Unions attached to factories and offices, and in schools.

Mr. Kirby then goes on to discuss in a little more detail the strength of various denominations. His attention is first of all occupied with the Anglican Church or the state church of England. Within this denomination there can be found, says he, two distinct factions. On the one hand there are those who have drifted farther and farther away from the heritage of the Reformation in the direction of the Roman Catholic Church. These are extreme Anglo-Catholics who emphasize liturgy, hierarchy in church government, sacerdotalism and closer ties with Rome.

There is, however, also a strong evangelical movement. What is meant by evangelicalism is something difficult to say exactly, for the term is quite broad. Although Mr. Kirby himself does not define the term, it usually refers to any church or denomination that stands in the tradition of the Reformation, with strong maintenance of the cardinal doctrines of Scripture such as the infallibility of Scripture, the vicarious atonement of Christ, the Virgin birth, etc. Its worship services are usually stripped of the pomp and ceremony of Roman Catholicism, and it emphasizes the preaching of the Word as central to worship. It claims missionary work among its chief callings, if not its only calling. It is usually considered to be the opposite of both modernism which denies the cardinal truths of Scripture, and Roman Catholicism with its emphasis on liturgy and sacerdotalism. However, as commendable as all this may seem, evangelicalism is also on the whole thoroughly Arminian. It, as a rule, favors the general atonement of Christ, the universal offer of the gospel, the invitation to arouse a decision in favor of Christ, the corresponding down-play of predestination and the truth of sovereign grace. It will often emphasize the social aspects of the gospel rather than the truth as such. It is, so to speak, somewhere between modernism and the Reformed Churches that maintain the fundamental truths of the sovereignty of God.

Mr. Kirby sees signs of the growing strength of evangelicals in the church of England.

He next turns his attention to what he calls “Free Churches,” meaning various other denominations such as the Baptist, Congregational and Methodist churches. While there is a certain hard core of evangelical men within these Free Churches, there are grave dangers as well. The two gravest dangers are, according to the reporter, the danger of all out enthusiasm for the ecumenical movements, and the strong tendencies towards liberalism in theology.

After discussing several other churches of minor importance and far from the main line of Reformed thought, the reporter calls attention to a rather interesting debate that is presently going on among evangelicals. He writes:

A controversy which is currently the talking point among many evangelical leaders is the Arminian-Calvinist debate. In the last six years or so there has been a definite swing to Calvinism and an increasing interest in the writings of the Puritans. Some leaders who supported Dr. Graham’s campaigns in 1954-1955 now seem reluctant to pledge their support. It is doubtful as to how far this discussion has percolated through to the man in the pew, and the general feeling is that when Dr. Graham comes to Manchester (in a few weeks, HH), the weight of evangelic& will be solidly behind him . . .

He closes his report with the hope that Great Britain may esperience a spiritual revival as this is the only real answer to the needs of the country. All of this does not sound very encouraging for the strength of the church in Great Britain. There does seem to be an element, extremely small, no doubt, which still clings to the Reformed faith that once was predominant in England. It is certainly to be hoped that our radio broadcast there can reach those few who still maintain the truth, that it can be a means of strengthening them and encouraging them to be faithful even over against much of evangelicalism that is also a corruption of the gospel of Christ. If the hopes for a revival are pinned on Billy Graham’s crusades, we hope that there are those who will not support him. It is highly dubious whether the preaching of Dr. Graham can ever save anyone, for, on the one hand, he is not sent out by any church institute whatsoever; and, on the other hand, he certainly does not preach the gospel.

We have heard recently from our editorial columns inThe Standard Bearer that there is a strong conservative element present in the Southern Presbyterian Church. It would seem as if this is a good solution to the vexing problem of modernism in that church which threatens to destroy it. Our editor pointed out that the chief evil of the Southern Presbyterian Church was their laxity in discipline. Perhaps the church could purge itself in this way and restore once again also discipline to its proper place. 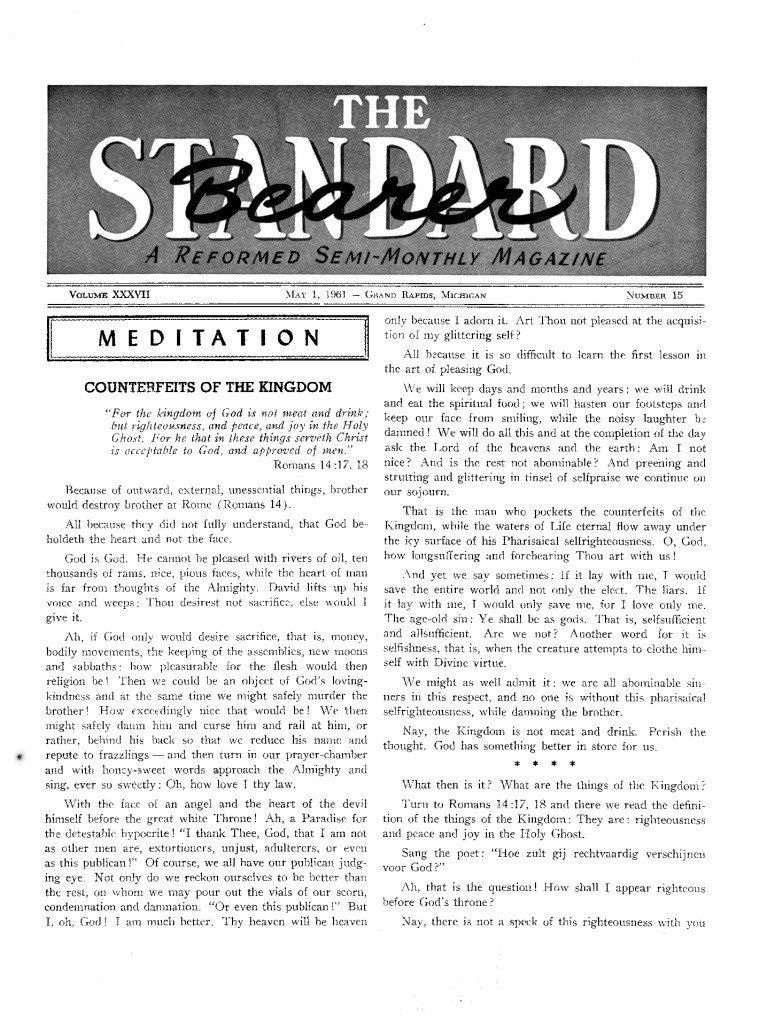