Federal Vision in the PCA

Earlier in this rubric I have written about “federal vision” theology and its new teaching on justification. One of the denominations that seem to be tolerating this teaching is the Presbyterian Church in America (PCA). In the August 2006 issue of the Christian Observer, under the heading “Members Of Federal Vision Study Committee Appointed,” we read this,

The 34th PCA General Assembly approved erecting an ad interim committee “to study the soteriology of the Federal Vision, New Perspective, and Auburn Avenue Theologies, which are causing confusion among our churches. Further, to determine whether these viewpoints and formulations are in conformity with the system of doctrine taught in the Westminster Standards, whether they are hostile to or strike at the vitals of religion, and to the present declaration or statement regarding the issues raised by these viewpoints in light of our Confessional Standards.” The GA authorized the moderator to appoint the members of this committee.

The committee has since been appointed.

From the same magazine (Christian Observer, August 2006), under the heading “Substitute Names For The Trinity,” we learn of a decision from another General Assembly.

Delegates to the Presbyterian Church (USA) national assembly meeting voted to “receive” a policy paper on gender-inclusive language for the Trinity. That means church officials can propose experimental liturgies with alternative phrasings for the Trinity, but congregations won’t be required to use them.

The panel that worked on the issue said that the classical language for the Trinity should still be used, but Presbyterians should seek “fresh ways to speak of the mystery of the Triune God” to “expand the church’s vocabulary of praise and wonder.” The panel also stated that one reason for the change is that the language limited to the Father and Son “has been used to support the idea that God is male and that men are superior to women.”

Some of the suggested options include “Mother, Child and Womb,” “Rock, Redeemer, Friend,” “Lover, Beloved, Love,” “Creator, Savior, Sanctifier,” and “King of Glory, Prince of Peace, Spirit of Love.”

The motives sound so noble—”to expand the church’s vocabulary of praise and wonder”—but the true motive is resistance to the biblical and created order of male authority and female submission. And the result is blasphemy, not praise and wonder.

So What is Going on in your Teen’s Life?

Do parents really know what goes on in the life of their teenage children, the pressures, the temptations, the lifestyle patterns that are promoted? Recent studies show that they do not, and that the parents themselves are really to blame for this.

From a USA Today article (8/16/2006) entitled “Survey: Parents clueless on booze, drugs at teen parties,” we find that parents and teens have different perceptions of what goes on at parties. These statistics are the results of a telephone survey from the National Center on Addiction and Substance Abuse.

— 80% of parents say: Neither alcohol nor marijuana is available at teen parties.

50% of teenagers say: Alcohol, drugs or both are available at teen parties.

— 98% of parents say: Parents are normally present at teen parties at their home.

33% of teenagers say: Parents are rarely or never at teen parties.

— 99% of parents say they would not serve alcohol at a teen party, while 28% of teens say they have been offered alcohol at supervised parties.

— 80% of teenagers will drink alcohol before they get out of high school.

— 50% of teenagers will have tried marijuana by this time.

Joseph Califano, the chairman of the center that conducted this survey, says of typical parents,

They smell no pot, they see no drinking and they hear nothing of the drugs that their kids are using. I think they really have no sense of how awash their teens’ world is in alcohol and drugs. There is a terrible disconnect.

These figures ought to prompt conversation and supervision by covenant parents of their teenagers. Perhaps it is more pleasant for parents not to know what really goes on, or perhaps it is easier to be an Eli and not restrain our sons and daughters, but biblical parenting requires staying engaged.

Another area of a young person’s life, of which a parent may easily be ignorant or misinformed, is life on the college campus. Many of our young people attend colleges and universities, and a large number of these are living on campus in dorms. What is going on in these dormitories?

An August 10, 2006 article from BeakPoint, a daily email publication from Prison Fellowship, reports on life on one American college campus. Yes, every campus is different, and the rules and level of supervision vary, but the young who attend college all have the same evil nature, and you have to believe the pressures are there. I quote the article in full here.

At Maryland’s Loyola College, ethics professor Vigen Guroian was lecturing on Aldous Huxley’s Brave New World. Students were comparing the novel—in which sexual promiscuity is required by law—with life in their own freewheeling dorms. Guroian pointed out the difference: Promiscuity on campus is voluntary, whereas in Brave New World, it’s mandatory.

After class, a young woman came up to Guroian and told him he was wrong. Peer pressure and living arrangements on campus make promiscuity “practically obligatory,” she said. “When it seems like everyone else is ‘doing it,’ it is hard to say no,” she added. “It is more like Brave New World here than you think.”

Guroian was not altogether surprised. He attended college himself in the late 1960s, when colleges gave up the responsibilities of in loco parentis. Up until then, separate dorms for men and women, along with stringent rules regarding visitors of the opposite sex, “made it possible for a female student to say ‘no’ and make it stick,” he writes. While the rules were not always followed, they established the boundaries and norms of acceptable behavior.

Today, these boundaries no longer exist. In his book, titled Rallying the Really Human Things, Guroian writes that the abdication of in loco parentis “opened the floodgates to the so-called sexual revolution, inviting much of what goes on today in college dormitories.” Men and women share dorms and even bathrooms at some schools. It’s not unusual, he says, for dorms to have a designated room set aside for casual hook-ups.

In effect, he says, colleges have “gone into the … brothel business.” Meanwhile, college administrators ignore the truth: Coed dorms work to the advantage of male sexual aggression. And the results are tragic.

“I know that young people are getting hurt, some permanently scarred for life,” Guroian says. “I hold colleges like my own morally accountable, if not complicit in this harm. The colleges know what is going on, and they [simply] shovel out self-serving rhetoric about respecting college students as adults. And,” Guroian says, “when those ‘adults’ get hurt, they order up more psychologists … to bandage the casualties, my children and yours.”

Guroian is right: These appalling conditions are both terrible and tragic. Students today need a great deal of wisdom to navigate a course of integrity in dormitory life. But the journey should not be made more difficult by college administrators who seem unable, or unwilling, to acknowledge the truth about human nature: Putting healthy young men and women together in close quarters only promotes promiscuous behavior. In the short term, these living conditions interfere with the students’ ability to learn. In the long term, they damage their ability to form successful marriages.

Before sending their kids off to colleges, parents ought to investigate the living arrangements. Alumni can also put pressure on their schools, demanding that they offer at least one non-coed dorm for women. And students themselves should ask administrators why they are being forced to live in surroundings that degrade them—a setting that turns college dormitories, according to Guroian, into virtual brothels.

Maybe this is what your son/daughter is dealing with in his/her life.

Parents should know that the parties and the sex don’t start out there, but they begin with what is and isn’t allowed in the home before and while the children are dealing with these pressures from outside the home. Contributing factors in the home can be television and radio, or the newer forms of media, Internet, iPods, and even cell phones with music, Internet, and picture and video capabilities. With these, the teens have an amazing amount of access to unsupervised illicit material that will feed the beast within.

From (of all places) the Associated Press, I have an article entitled “Dirty song lyrics can prompt early teen sex” (August 7, 2006). Here are some quotes:

Teens whose iPods are full of music with raunchy, sexual lyrics start having sex sooner than those who prefer other songs, a study found.

Teens who said they listened to lots of music with degrading sexual messages were almost twice as likely to start having intercourse or other sexual activities within the following two years as were teens who listened to little or no sexually degrading music.

Among heavy listeners, 51 percent started having sex within two years, versus 29 percent of those who said they listened to little or no sexually degrading music.

From Lifesitenews.com (August 28, 2006), we have an article with this telling title, “Go to your room—And Don’t Turn on your TV, Computer, your Video Games….” (You can read this article yourself on line). And isn’t this much of the problem? Maybe not just in bedrooms, but unsupervised, or used as a babysitter.

Maybe not just television, but the iPods and Internet and cell phones.

“I will walk within my house with a perfect heart…. I will set no wicked thing before mine eyes…. Mine eyesshall be upon the faithful of the land…. He that worketh deceit shall not dwell within my house….” (Ps. 101).

Now it isn’t just sex that sells, but it is homosexuality that sells.

A ruggedly handsome man emerges from under the hood of a car, rubbing his grimy hands on white cloth. Leaning against the dark sedan, another man, young and athletic looking, gifts the mechanic a neat new watch. His reward? The man leans in and the two share a kiss. Some kind of underground gay romantic comedy? No, it’s a recent TV commercial for Italian designers Dolce & Gabbana, and it’s part of a growing trend in European advertising toward ad campaigns that better represent consumers’ diversity. And if those consumers are gay, so much the better for advertisers, who have found a way to tap into a disproportionately affluent slice of the market.

So advertisers have found a new niche. The article goes on to quote different advertisers, in the USA too, who are developing this area of the advertising market. The target, they say, is the affluent homosexual sector of society. But don’t be fooled, this kind of advertising achieves more than just selling to that particular segment of society. If advertising draws attention and is memorable, it has sold its product—who can forget a commercial in which two men kiss—and so the target is more than the homosexual community. This kind of advertising, along with much of what is now on television, portrays the homosexual lifestyle as an acceptable alternative, promoting tolerance, and even perking curiosity and interest, among viewers. People are entertained by this. People take pleasure in it.

This is certainly indicative of where our culture and our world are headed. Romans 1 describes the highest expression of human depravity in a society in terms of “women changing the natural use into that which is against nature” and “men, leaving the natural use of the woman, and burning in lust one toward another.” And it goes on to talk not only about those who commit such things, but also about those who “have pleasure in them that do them.” 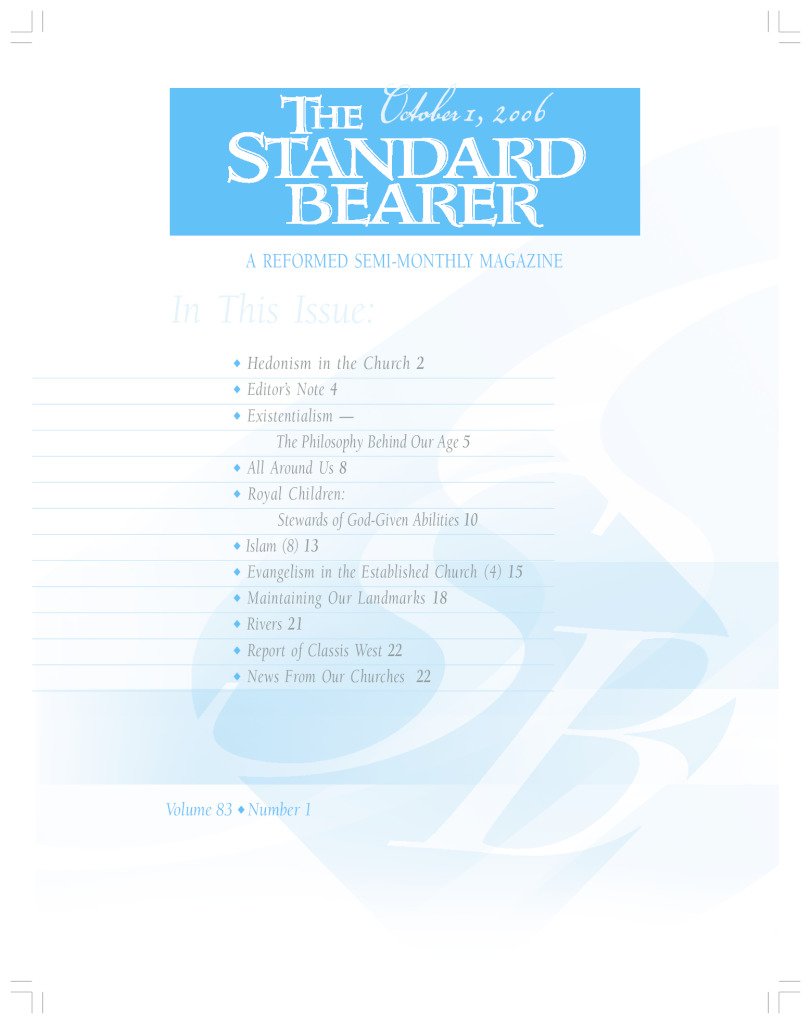