A Suggestion About Communion Practices

A Suggestion About Communion Practices

Some questions about the communion thank offering which appear elsewhere in this issue reminded me of other matters concerning liturgical practices connected with the celebration of the Lord’s Supper in our churches. Perhaps this is as good an occasion as any to mention them.

I am referring to the wide divergence of practice in our churches with respect to the use of the Form for the Administration of the Lord’s Supper. In my travels as a wandering supplier of pulpits I have come upon this divergence.

For example, there is divergence of practice with respect to the use of the Form in the second service. Some churches do not use the. Form at all, but substitute Article 35 of the Belgic Confession. Some churches use the entire last section of the Form, beginning with the words, “Let us now also consider to what end the Lord hath instituted his Supper. . . .” Some churches use only the last part of this second section. Some churches have used an abbreviation of the entire Form. And some have eliminated parts of the Thanksgiving at the conclusion of communion. The reason for these changes is probably the desire to eliminate tedious repetition and to save time in the service in which the applicatory sermon must be preached.

As another example, I may mention the widespread practice of reading the so-called preparatory part of the Form on the Sunday preceding the Lord’s Supper, and reading only the second part of the Form, beginning at “Let us now also consider . . . ,” on communion Sunday. This practice has been introduced, I think, partly as a time-saving device and partly on the basis of the supposition (right or wrong) that the first part of the Form should properly be read at the preparatory service.

Now it is not my purpose to enter materially into these various practices and to evaluate them. Some may have good elements in them; others may be totally incorrect and even incongruous. Nor is it my point that there must be an absolute uniformity of practice liturgically. To attempt to impose an absolute uniformity would be both hierarchical and foolish. Consistories are rightly jealous of their local rights. Fact of the matter is that the Church Order specifically allows room for a certain kind of divergence when it states: “Every church shall administer the Lord’s Supper in such a manner as it shall judge most conducive to edification,” Art. 62.

My point is, first of all, one that concerns the Church Order. Strictly speaking (and in some cases even broadly speaking), these divergent practices with respect to the Form are in clear violation of the Church Order, Article 62. To the sentence quoted above, that article specifically adds the provision: “provided, however, . . . that at the conclusion of the sermon and the usual prayers, the form for the administration of the Lord’s Supper, together with the prayer for that purpose, shall be read.” Notice, the article states that “the form” shall be read, not part of the form, not an abbreviation of the form, not Article 35 of the Confession. Once again, the question here is not whether these practices are good or bad. The point is that this is bad church governmental practice. If there are to be changes made with respect to the Form and its use, or if there are to be various options (such as an abbreviated form or a partial reading of the form), these should be synodically approved and legitimized in the Church Order. For every consistory pledges (Art. 86) to show all diligence in observing the articles of the Church Order “until it be otherwise ordained by the general synod.” You see, it is exactly when these provisions are ignored “by common consent” and when every consistory does what is right in its own eyes, that articles of the Church Order gradually fall into partial or total disuse and become dead letters. The way to avoid this is very simple: bring about changes in the orderly way. This is the way of respect for our Church Order.

In the second place, my point is that the Liturgy proper (the Forms), in distinction from liturgical practices, is the province of the churches in common. Apart from anything else, there is this sound reason for this, namely, that any changes should be based upon thorough study of the historical roots and the principles involved. And for the safeguarding of the Liturgy and of the churches, as well as for the benefit of the various congregations, all the churches should share in and benefit from such study. For example, if there is to be an abbreviation of the Form, this should be a well-worded abbreviation, one which retains all the proper elements of the Form and one which is unified and coherent instead of a patch-work of sentences or parts of paragraphs out of the present Form. For another example, take the dividing of the Form. Obviously our present Form is linguistically not designed to be divided. Besides, there is the very legitimate question (which ought to be studied both from a historical viewpoint and from the viewpoint of principles) whether the so-called preparatory part of the Form is indeed preparatory (in the sense of our preparatory services) and whether it was ever intended to be used one Sunday in advance of communion. Besides, there is involved what to my mind is a perfectly horrendous anomaly, that when the form is divided, the institutionof the sacrament is not even read when the Lord’s Supper is celebrated! For a third example, it is perfectly obvious that Article 35 of the Confession (though it is a perfectly fine article for a creed) is a far cry from a liturgical form.

Hence, there is plenty of room for study and correction.

And here is my suggestion. Some consistory should carefully formulate an overture to Synod to bring about legitimate correction in this situation. If there are to be certain optional forms; these should be properly founded and formulated, and the Church Order should provide for legitimate use of them. But this requires study and careful formulation by a capable committee; it requires careful consideration by our broadest assembly; and it requires attention to any proposed changes by the churches.

Make no mistake. I am not proposing liturgical revision in the radical sense. I am an avowed enemy of the current revisionist movement which has infiltrated the Reformed community. We have a heritage of inestimable value in our Reformed liturgy; and we must preserve it. What I am suggesting is an overture to bring about and to legitimize only these minor corrections without making any basic changes. And I believe that this will help to preserve rather than neglect and misuse the heritage of our liturgy.

Give it some thought. 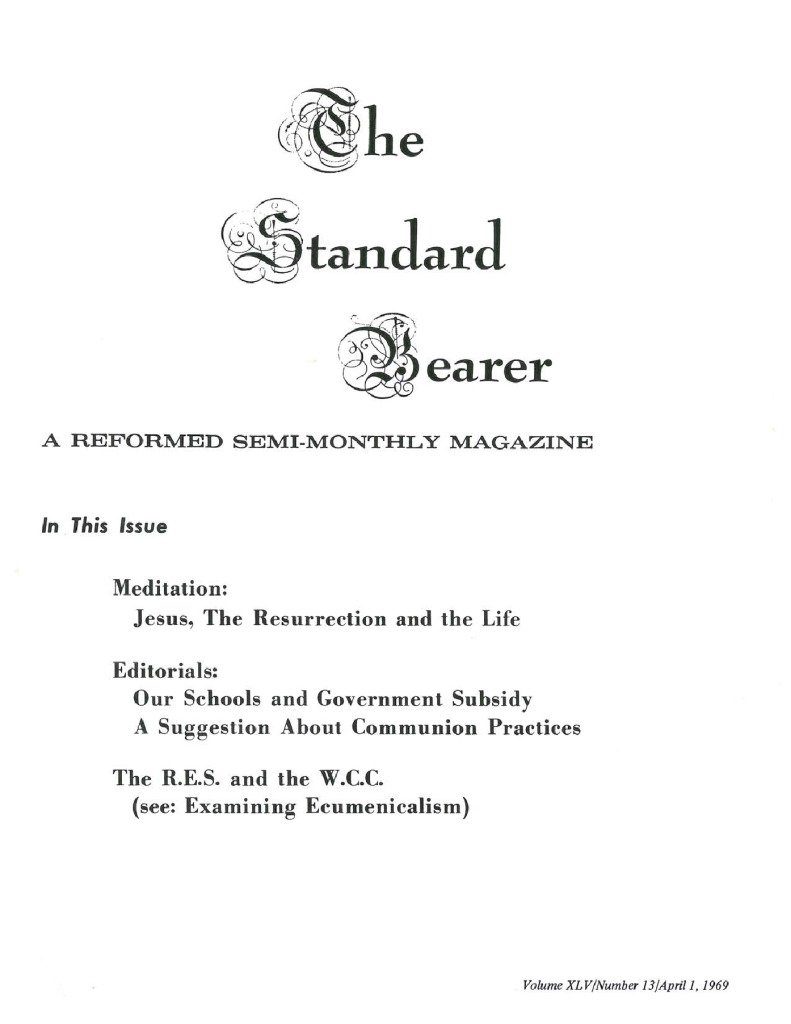