1. How Do You Quote Scripture? 2. Torturing Scripture

How Do You Quote Scripture?

If you will refer to Hosea 4:9 you will discover that the quotation is not: as priest so the people, but it reads this way: “like people, like priest”. Its equivalent you will find in Isa. 24:2 and both passages refer to the impartial judgment which God sends over people and priests alike. The people sinned and the priests ate up the sin of the people and therefore both of them merit judgment. When quoted this way it leaves a vastly different impression than when misquoted.

And how many people are there, who when they would quote the Jerusalem, Jerusalem text from Matt. 23, give it this way: Jerusalem, Jerusalem. . . .how oft would I have gathered thee together as a hen gathers her chicks. . . .but ye would not. You would perhaps quote it that way also. But it is not right. Jesus does not say that He would gather Jerusalem, but He says that he would gather “thy children”. Not Jerusalem now but Jerusalem’s children Christ would gather. And He did gather them, only Jerusalem resented it and crucified Him.

I recall one time a good old mother, who had grandsons in the recent world war, said to me that she was greatly comforted by that promise of God which said: when they fall upon the sword they shall not be wounded.” A promise such as that meant so much to her she assured me. I was rather impressed by this quotation from Scripture, never having read it before. As soon as I reached my study I searched for this quotation. We found it in Joel 2:8. But to my and later also to her great surprise it appeared that these words refer exactly to the great army of destruction which God will send against apostate Zion. Therefore the text actually meant the very reverse of what this person thought it meant and therefore quoted it with a meaning it did not have.

At a funeral the minister sought to exhort his hearers with “prepare to meet thy God O Israel” (Hosea 4:12), that is, that men should get ready to stand in judgment before God. That is surely a scriptural and necessary admonition, but it could scarcely be elicited from this text. The text is a threatening of God against the impenitent Israel and an announcement that God will most certainly descend upon her in judgment, and they will meet the God of righteous wrath.

Who has not heard quoted “Wees niet al te rechtvaardig” (be not over much righteous, Eccl. 7:16). This quotation is frequently used to condemn the conduct of persons who seem to be overly pious. Or is it quoted to describe the Pharisee. But if you will study the text carefully you will discover that neither here, nor anywhere in Scripture for that matter, are we ever warned against being extremely righteous. We can never be too righteous, by faith. The quotation in question however warns against finding fault with God’s treatment of righteous and wicked during this dispensation. And being righteous over much is alike to trying to set oneself up as being wiser than God in matters of justice during this dispensation. Then you arrive at a wholly different idea of what this quotation implies.

“Neither cast ye your pearls before swine”, is a classic quotation people frequently use when they want to tell you not to bring the Word of God to profane people. In that case, however, Jesus did exactly what He warned His followers not to do, for He constantly confronted the profane Pharisees with the Holy Word of God. The text evidently is an admonition to His disciples not to do as the Pharisees do (Cf. the whole context of Matt. 7). They gave what was holy to the dogs, and thus they esteemed holy things lightly, so lightly in fact that they even made long prayers in order to be seen of men. If you pray long to be seen of men e.g., you are casting what is holy to the dogs.

And that “Ephraim is a cake half-baked” is almost become a proverbial quotation today. Yet the Bible says nothing of a cake half-baked, it says that Ephraim is a cake not turned. With the evident difference that in the misquotation one is lead to think of a poorly baked cake, but in the scriptural quotation God wants you to see that Ephraim is like a cake which stays long on the hot fire, unturned, and is consequently in the process of burning up, (Cf. Hosea 7:7-9).

In such matters as those mentioned above we all err constantly. We may safely say that we Christians do not do it with malicious intent. We have no foul purpose in mind when we sometimes misquote or misapply Scripture. That by no means makes it harmless, but at least it cannot be ranked with blasphemy.

It becomes devilish, however, if there is a design behind it. Then we get “wresting of Scripture” of which Peter speaks in II Pet. 3:16, where the word “wresting” literally means to put Scripture on the rack, torture it, stretch it, tear it apart and treat it at will. Or we get that against which Paul warns us in II Cor. 4:2 of handling the Word of God “deceitfully.” Then it ranks with blasphemy.

Of this sort for instance were the Pharisees in Jesus’ day who were experts at quoting Scripture, yet so that

with their quotations they turned Scripture completely

upside down. They took what Moses said and quoted it so that it contradicted what Jesus said. Moses and Christ are one, when it comes to speaking the Word for Christ spoke through Moses. Yet the Pharisees knew how to quote Scripture so that it refuted Christ Himself. In the sermon on the Mount we notice that the Jewish lawyers were skillful in making verbatim quotations from the Old Testament. They quoted Moses in matters of divorce, taking oaths, taking vengeance, etc. Frequently they quote Moses verbatim, as e.g. “an eye for an eye and a tooth for a tooth” (Matt. 5:38—Lev. 24:20). But yet their verbatim quotations were errors and Jesus condemns them as wresters of Scripture. Over against their literal quotation of Lev. 24:20 Christ states: “But I say unto you that ye resist not evil”. Christ is not in conflict with Moses, but the Doctors have quoted Scripture, using it as a vehicle for their own sinful thoughts.

It is possible therefore to quote Scripture accurately, as far as the letter goes, yet by our very quotation abuse Scripture. Example, the Pharisees.

Modernism, in all its schools of higher criticism engages in this sort of blasphemy. The more they quote Scripture the more they blaspheme.

But Satan is also an expert at quoting Scripture so that it contradicts itself. Liar that he is, you would expect him to insert a word or two when he quotes the Bible or change a word or two, but no, he quotes it substantially correct. This case is recorded in Matt. 4:6. Satan quotes Ps. 9:11-12, and except that he omits a clause he quotes accurately. Jesus, I believe, admits this also for Christ does not correct Him by saying: it is not so written. But if Jesus should follow the quotation as the devil gives it Jesus would be tempting His Father. What Satan did was to apply Scripture in a way in which it was never intended to be applied. Ps. 91:11-12 refers to God’s loving care over the righteous, but Satan sought to make this text mean that Christ could let Himself drop from the pinnacle of the temple and not injure Himself. Satan’s quotation of Scripture therefore constituted a temptation for Christ. If Christ had obeyed the word of Scripture, as the devil quoted it, Jesus would have tempted His Father in heaven.

See therefore how extremely important is our quoting of Scripture. Just because you quote Scripture is no guarantee that you are speaking the truth. Scripture is truth, but all men are by nature liars, and it is the climax of blasphemy to quote Scripture with the purpose of using it as an instrument to carry private notions.

Scripture is not the WORDS of God first but the WORD. Keep it in the singular and there is no danger that we will abuse it. Scripture is ONE, let us quote it as being the ONE WORD of God in all its parts. 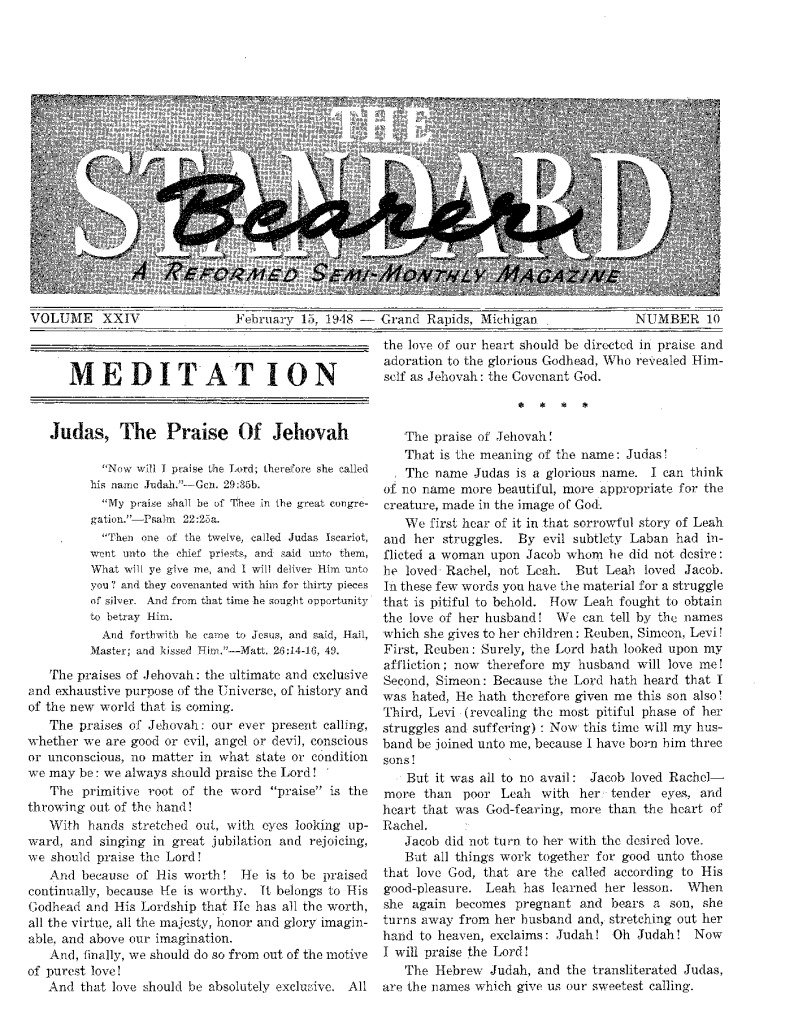