To ward of false doctrines and errors that multiply exceedingly through heretical writings, the ministers and elders shall use the means of teaching, of refutation, or warning, and of admonition, as well in the ministry of the Word as in Christian teaching and family-visiting.

The original article is almost unrecognizable in our present Article 55. Originally the article concerned the censorship of books and the banning of heretical writings.

The fathers were aware of the power of the pen. They had witnessed the revolution caused by the invention of the printing press. They had seen the influence of the printed page in the spread of the Reformation. They had witnessed the tremendous impact that books had in the spread of new ideas. And they were concerned that this new tool for the promotion of truth not be used as an instrument in the service of the lie.

Already in 1517, the Provincial Synod of Dordt passed the following resolution:

The brothers deem it necessary that the following means ought to be taken to eradicate false doctrines and heresies, which increase more and more by the reading of heretical books: 1) The ministers shall exhort the people from the pulpit to read the Biblical writings, and they must warn against unhealthy, heretical books, mentioning even the titles of the books from time to time. 2) Those book sellers who are kindly disposed to pure doctrine shall be exhorted by the ministers neither to print nor sell such books. 3) The ministers shall pay careful attention at home visitation of the members of the congregation whether they have detrimental books in their homes so that they may exhort them to get rid of such books.

No one of the Reformed religion shall undertake to have printed or otherwise distributed any book or writing produced or translated by himself or by another concerning religion unless the same has been examined and approved by the ministers of the Word of his classis, or by the particular synod, or Professors of Theology of these provinces, including also foreknowledge of his classis.

This type of censorship was not unheard of in the days following the Reformation. Well known is Rome’s banning of “heretical writings” in its Index Librorum Prohibitorum. Included in the books banned by the “Index” were the works of the Reformers, as well as their translations of the Bible. Anyone caught possessing a book listed in the “Index” suffered severe punishment, some even death.

Following the tradition of Rome, the early Reformed synods sought to control the spread of heretical writings. Anyone interested in publishing a book dealing with religion had to gain ecclesiastical approval.

But this kind of ecclesiastical censorship, although well intentioned, was misguided. For one thing, it proved impossible to enforce. As books became more easily available, the mere fact that a book had been banned aroused sufficient interest to promote its sale. Neither did the government show any great inclination to assist the church in this sort of enterprise. From a principle point of view, such censorship was legalistic and infringed on individual Christian liberty.

Ministers and elders are to “… ward off false doctrines and errors….” That is the mandate of Article 55.

There is a close connection between this article and the preceding. Articles 53 and 54 concerned the signing of the “Formula of Subscription.” By signing the “Formula” officebearers vow that they themselves will uphold and defend true doctrine. Article 55 calls the officebearers to exert themselves to preserve the congregation in purity of doctrine and holiness of life.

Heresy must be opposed! False doctrine must be refuted! Error must be condemned and warned against!

This is a strange sound in our theologically tolerant day. Room is made in the church for deviant views. It is said that those holding to two completely different positions, for example on the issue of women in office, may rightfully coexist in the same church federation. The importance of maintaining clearly defined doctrinal positions is downplayed. The individual’s right to take exception to binding doctrinal statements is defended. And let no one dare to criticize anyone or any group, or church, or organization that diverges.

Neither are our churches immune to the influence of this kind of mind-set. Among us too there are those who can be heard to complain about negative sermons, negative speeches, and negative editorials. “Isn’t it enough,” it is asked, “that we set forth the truth positively? Do we have to criticize others?”

Certainly the truth must be set forth positively. The gospel of grace and the holy life that adorns that gospel must be proclaimed. But the gospel must also be proclaimed antithetically. The lie must be pointed out and condemned. Those who teach false doctrine must be identified and warned against.

How can there be any doubt about this!

Read the prophets! Examine the ministry of our Lord Jesus Christ! Peruse the apostolic writings! Study our confessions!

The prophets were not content only to be positive. No one could be more scathing in his criticism than our Lord. The apostles were often sharp in their condemnation. Our confessions are bold to warn against heresy.

This is the nature of the gospel. And this is clearly the calling of the faithful officebearer. In his parting words to the elders of Ephesus, Paul points them to this calling: “For I know this, that after my departing shall grievous wolves enter in among you, not sparing the flock. Also of your own selves shall men arise, speaking perverse things, to draw away disciples after them. Therefore watch, and remember, that by the space of three years I ceased not to warn everyone night and day with tears” (Acts 20:29-31). If the calling of every believer is to “believe not every spirit, but try the spirits whether they are of God: because many false prophets are gone out into the world” (I John 4:1), how much more is this not the calling of officebearers?

What is at stake

Past errors which still threaten the church today must be warned against. From a certain point of view, there is no new thing under the sun when it comes to false doctrine. Every error that the church faces today has, in one form or another, been faced by the church in the past. This is why a good understanding of church history and a thorough acquaintance with our confessions is necessary for officebearers.

At the same time, officebearers must not be content merely to warn against errors of the past. But current I enemies of the truth must be exposed and their teachings condemned. Officebearers must keep themselves abreast of developments and movements in the church world of today. They must be able to point out the departures from the truth of the Charismatics, the New-Agers, the Reconstructionists, the Pre-and Post-millennialists, the feminists, the Promise Keepers, the Christian Psychology movement, the false ecumenical movement, and many more.

The concern here is certainly the welfare of the church. For the church is built upon the truth. And the church is called by God to be “the pillar and ground of the truth” (I Tim. 3:15). Out of love for the church the faithful officebearer must warn against every attack upon and departure from the truth.

But of even more concern is the honor of God. The truth is God’s truth. Every false doctrine and every heretic who promotes false teaching dishonors God. For the sake of the glory of God the faithful officebearer must take seriously his calling to defend the truth.

Officebearers must take every opportunity to carry out the calling of Article 55. Refutation and warning, publicly and in private, are in order whenever and wherever officers have opportunity to confront false doctrine.

Article 55 mentions some specific opportunities: “I… as well in the ministry of the Word as in Christian teaching and family-visiting.”

Certainly the minister must take the lead here. The ministry of the Word is mentioned first. In the public preaching in the congregation error must be pointed out and heresy condemned. The minister must pay attention to this in his regular sermon preparation. The elders must insist on it that this be done in the preaching. The elders ought to discuss this element of the preaching with the minister and feel free to make suggestions in this regard.

“Christian teaching” is the general work of both minister and elders as they go in and out among the members of the congregation. Individual pastoral labor is in view here. Included are the catechism classes of the congregation, led either by the minister or the elders. Especially in the older classes, which deal more with doctrine, attention must be given to identifying false doctrine and warning against error.

Mention is also made of “family- visiting.” Part of the spiritual inspection of the families of the congregation is seeing to it that there is no embracing of false teaching in the home. Family visitation gives the elders a good opportunity to warn against errors and movements that are a special threat at the moment. Since Article 55 refers especially to the multiplication of false doctrines through “heretical writings,” family visitation is also a good opportunity to exhort the members of the church to the reading of sound, Reformed literature, both books and magazines, that explain and defend the faith. “Are good books bought and read? Does the family subscribe to the Standard Bearer and Beacon Lights? Do the parents encourage their children and young people to read?” 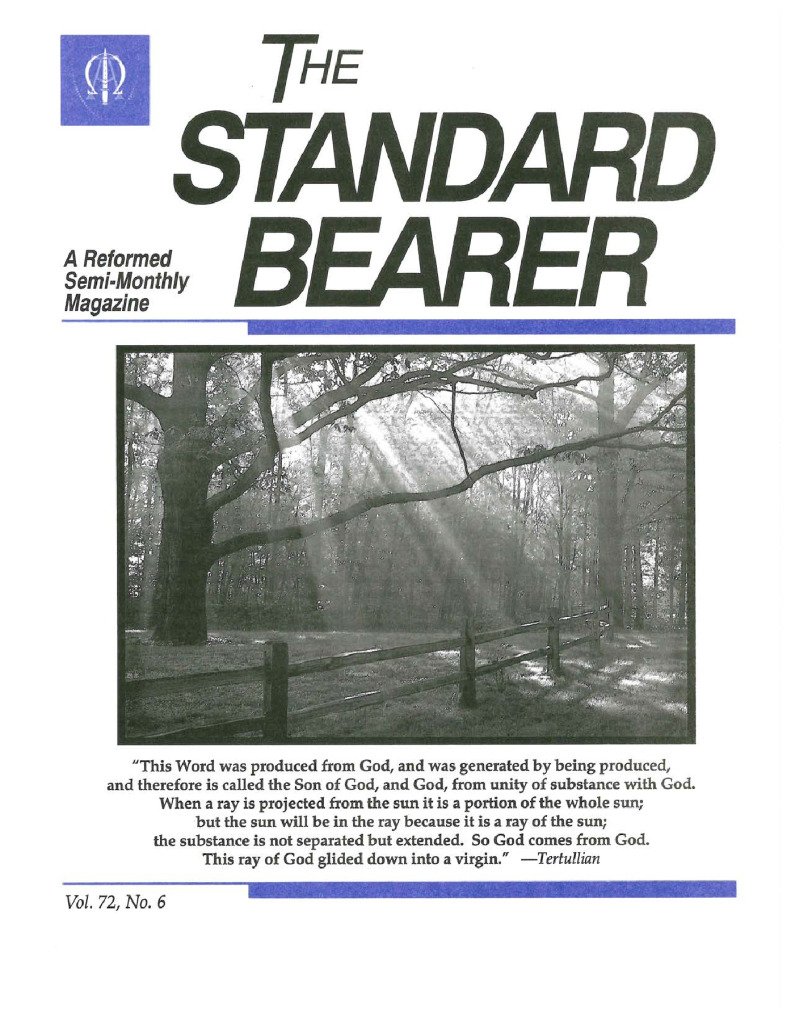