The Records of Ecclesiastical Assemblies

The Records of Ecclesiastical Assemblies

“It shall be the duty of the church in which the Classis and likewise the (particular) or general Synod meets to furnish the following meeting with the minutes of the preceding.” â€•Art. 45 D. K. O.

The provisions of this article of our Church Order are no longer observed. It is one of those articles that is no longer necessary due to changing circumstances and, it seems to me, there is even room to question the propriety of making one particular church responsible for the presence of the minutes of a broader gathering. Undoubtedly this is one article that would undergo a complete revision or be dropped altogether if the Synod would decide to carry through the proposal to revise our Church Order of some years ago.

In the proposed Church Order revision of the Christian Reformed Church this article has been dropped and the following inserted in its place: “Major Assemblies shall appoint Stated Clerks for the purpose of receiving communications, keeping the files and the archives, and preparing and distributing the agenda. They shall likewise appoint treasurers to receive and distribute finances.”

In favor of this revision is the fact that it expresses current practices. When the Classis or the Synod meets, it is not the church in which that gathering is held that furnishes the body with the minutes of the preceding session but it is the Stated Clerk of the gathering itself who provides this information. Against this revision, however, is that it omits an important element that is probably the principal reason for the article in the first place.

We retain the provision of Article 45 but do not observe it. That is not good. We do not require the calling church of the Synod or the particular church in which the Classis meets to furnish these bodies, with the minutes of their previous session. In strict compliance with the letter of the Church Order, however, this should be done and if it were practiced it would, in effect, simply mean that the consistory of the church where the broader gathering was to be held would be responsible to see to it that the Stated Clerk was present with the required data. In the case of the Classis, it would involve a practical difficulty, if not an impossibility, for the local congregation to provide the Classis with these minutes because our consistories do not receive copies of them. In the case of the Synod, the local church could provide the Synod with a printed copy of the Acts of the preceding Synod but this is not necessary since Synod has in its own possession sufficient copies.

In the set of rules adopted by our Synod in 1957-58 mention is not made of this matter. Now it might be argued that it was not necessary to express this because it is already expressed in the Church Order proper and of course, this is correct. However, if we take a careful look at these rules it becomes evident that in the adoption of these rules, Synod had no intention of observing the rule of Article 45 of the Church Order.

When Synod, in Article I, set forth the duties of the calling church, they merely expressed that the calling church “shall announce the next succeeding Synod to the churches in a Synodically designated publication at least one month before the date of the meeting and they shall provide all the facilities needed for the synodical meetings, make arrangements for the lodging of the delegates, etc.” This rule would not exclude their also “providing the Synod with the minutes of the preceding” but then there might have been at least a reference to Art. 45 D.K.O. However, when the Synod in Article IV of the same rules defines one of the duties of the Stated Clerk as follows: “he must be present at all synodical meetings in order to furnish Synod, upon request, with any needed information from the archives,” it becomes plain that the responsibility the Church Order places upon the calling church, Synod puts upon its Stated Clerk.

Synod’s position is clearly that it is the responsibility of the Stated Clerk to provide any needed information from the preceding minutes and either Article 45 then should be revised accordingly or this rule abrogated. Undoubtedly the present practice is motivated by practical considerations.

That the churches in the past did not follow this practice of today can easily be understood. First of all, due to the costs of printing, the Acts of Synods were not as plentiful and readily available as they are today. And next, the churches of the immediate post-reformation era preferred to delegate authority to churches rather than to individuals. They were afraid of individuals assuming too much power and especially of abusing or misusing authority that was delegated to them. These fears were not without justification for they had been witnesses of countless evils in the church in the past which sprang from such abuse of power. It was not, therefore, mere practical considerations that moved the Synod of 1575 and again in 1581 to incorporate the provisions of Article 45 in our Church Order. These forefathers believed that the records and archives of the churches belonged to the churches and not to any individual. Consequently, the churches rather than an individual should also be responsible for them. In this they were undoubtedly correct.

With a view to this it seems that there is something lacking in Article 45 and, on the other hand, it is evident that the current practice of the churches with regard to this matter is not, strictly speaking, in harmony with the Church Order. The matter, however, is not real serious and it could conceivably be corrected by a simple revision of this article. Such a revision would retain the present practice which, for practical considerations, is advisable and at the same time preserve the principle of this article of the Church Order.

We need not suggest an exact reformulation of such a proposed revision. It is sufficient for our present purpose to suggest the elements that it should contain. These would be:

(1) A statement to the effect that the Stated Clerk of the major ecclesiastical assemblies shall be responsible to see that the past records of the assembly are available for consultation, if needed, at the time of the meetings. This would be similar to our present Synodical rule.

(2) A provision according to which these records of the major ecclesiastical bodies are placed in the custody of a local church, preferably one with a fire-proof safe. That church would then be responsible for their safe-keeping.

(3). A stipulation by which the Stated Clerk would be made trustee of the records under the direct jurisdiction of the local church. In the event of any act of malfeasance on the part of the Stated Clerk, the local consistory could then immediately take action to dispossess him of the properties that belong to the churches.

History also makes plain the need of some such provisions. We may cite our own case as an example. In 1953-54 the Stated Clerk of our Synod abused his authority and has since that time confiscated the records that morally and legally belong to our Synod. The same is true of the records of our Classis West. Now it is, of course, possible that if the above suggestions had been enacted the consistory in that sordid history might have also gone schismatic with those Stated Clerks and the end result would have been the same, but it is also possible that the custody of those records might have been entrusted to a consistory that remained faithful to the historic traditions and confessions of the Protestant Reformed Churches. In that event action could have immediately been taken by which those records might have been reclaimed for the Synod whose lawful property they are.

The preservation of ecclesiastical records is a matter of great importance. This is true for the local churches as well as for the major assemblies of the churches. Often this is not realized and those entrusted with the keeping of those records, through carelessness permit them to become lost. The result is that there are some churches that have no historical record of their origin and early history. The minute books, together with all supplements to the minutes, as well as other papers and documents of importance ought to be kept in a safe place and preserved with great care. These documents are not made in duplicate and once they are lost it is difficult, if not impossible, to replace them.

Our Synod too should take definite steps to preserve our historic records. Especially would this be true if in the providence of God the confiscated records that date back to the origin of our churches and Synod should be repossessed by our churches.

In the Netherlands the large church of Amsterdam has acted as an Archivist for the Reformed Churches for many years. In 1911 the Synod Zwolle authorized this church to build a special fire-proof vault for the safe keeping of historic documents. In 1934 the Synod of the Christian Reformed Church appointed an Historical Committee which was charged “to gather and preserve books and documents of historical value pertaining to the history of our church and the church from which we originated and to religion in general, and to provide a room and facilities in the college or seminary building where they can be properly preserved and displayed.”

Today the church visitors ask each consistory during their annual visit whether “the archives are in order” and further whether “all proofs of possessions are kept in a safe place.” It might be well to add a further question which would remind all consistories that they ought to keep their records in a safe, and if possible, a fire-proof place. 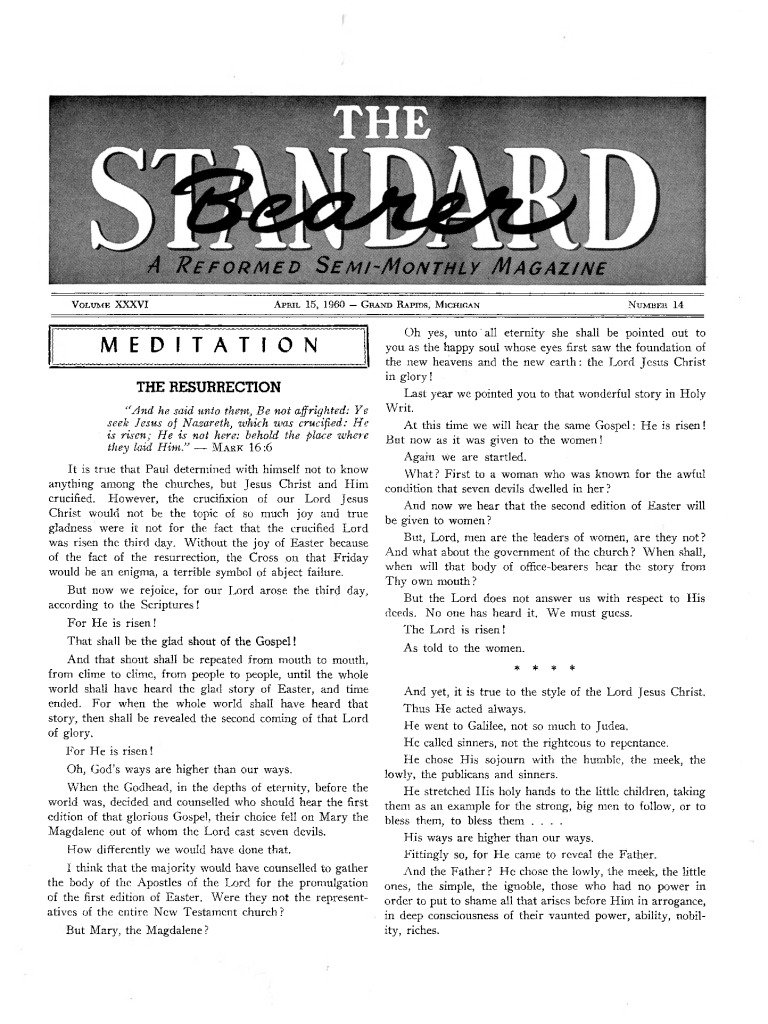