The Covenant – Just Leaving It There

The Covenant – Just Leaving It There

The following letter was received in response to our recent articles:

I have some questions concerning Rev. Woudenberg’s views on the covenant expressed in the Standard Bearers of Sept. l/95, p. 493 and Oct. l/95, p. 13. It is not at all clear to me how he understands the baptism of children born into a covenant home. Are they baptized as children in the covenant as heirs of the promise? Or does baptism only signify that they are members of God’s church? Can we make such a distinction? Abraham circumcised not only his sons but all that belonged to his household. Were they circumcised because they were God’s elect children, i.e., belonging to the Seed, that is, Christ, or because they belonged to God’s covenant children? As I read Woudenberg he leaves this hanging.

As a young man I wondered what baptism meant for our children. Our minister gave a concise answer. He said: “The God who cannot lie says they are my children. Just leave it there.” That is how he understood the words to Abraham: “… to be a God to you and your seed after you throughout their generations,” (Gen. 17:9). So the fathers of Dort understood it (Chap. 1. Art. 17). And as I see it every child born to believing parents is a covenant child and must receive the sign and seal as a covenant child, that is, a child of God.

The attempt to understand or solve Scripture’s mysteries through logic gets one into endless problems.

I value Rev. Tuininga’s response to my recent articles concerning the place of children in the covenant, not only because it is better that he should explain his views on this matter -similar, it seems, to the views of Dr. Schilder and the Liberated churches – rather than for me to do so, but even more because of the importance of this matter. It has drastically divided the Reformed churches for at least the last 50 years (particularly since the synodical decision of 1944), and it is well that we should try to understand each other regarding it, if doctrinal convictions are to retain the importance they ought to have.

One can understand Rev. Tuininga’s feelings for the pastor of his youth when the latter remarked, “The God who cannot lie says they are my children. Just leave it there.” What he said is certainly true: God does not lie or contradict Himself. On this fact rests the logic that runs all through the Bible, providing the possibility of a true biblical exegesis. God’s Word is a unified whole; and we can test our understanding of any one part of it by comparing it with the rest. The problem is, I fear, that it is precisely with this principle that the position of Rev. Tuininga fails to comply.

In spite of the fact that Rev. Tuininga would maintain that “every child born to believing parents is a covenant child and must receive the sign and seal as a covenant child, that is, a child of God,” I am sure that he knows both from his own experience and from Scripture that there are many such who grow up without ever knowing, not just intellectually but experientially, what it is to know God and belong to him (John 123). We may baptize them as infants, as we should. We may teach them the truths of God, as the questions at baptism require us to do. We may assure them in personal contact and through the preaching of the Word of the wonders of God’s promises, and of the consequences of rejecting them. We may love these children, and pray for them, beginning in the prayers at the baptism itself. But in the end there are those of them who do not believe what is said, and without believing they never really come to know what covenant fellowship with God is. That does not mean that the Word of God has failed, or has proved to be false (Rom. 9:6). What it comes down to is faith; and that is a gift of God (Eph. 2:8). The Author of that faith is the Holy Spirit (Lord’s Day 27), not man. Nor does He give it to everyone (Acts 13:48). What Rev. Tuininga has to understand is that in Scripture to believe and to be elect are the same thing; and covenant life cannot be separated from that. Neither is faith a condition to the covenant, but the first expression of God’s covenant faithfulness to us.

In actuality, what we are dealing with here is the gospel, and with that very point concerning it to which Paul comes at the heart of his great epistle to the Romans, particularly in chapter four. There, after carefully making his way through a line of well reasoned logic – a “just leave it there” logic, if you will – he arrives at the conclusion, 411, “And he [that is, Abraham] received the sign of circumcision, a seal of the righteousness of the faith which he had yet being uncircumcised: that he might be the father of all them that believe, though they be not circumcised; that righteousness might be imputed unto them also.” Paul’s point is this. There were those in his day who were committed to the position — not dissimilar, it would seem, to that of Rev. Tuininga and the Liberated churches — that inasmuch as they had kept the law and received the sign of the covenant (circumcision in the Old Testament, and baptism in the New), they could rest on the presumption that they were heirs of the promises given to Abraham, and recipients of a special position of righteousness and favor in the sight of God — rather like, it would seem, those in the Dutch tradition who through a sad misapplication of the Belgic Confession presume to call themselves the “true” Christians and “true” church while classifying those who differ with them as “false.”

But Paul, on the basis of his carefully crafted logic, strongly rejects this. His argument is this: receiving the sign of the covenant according to the law does not make one an heir to the promises of Abraham, since Abraham himself was righteous before that sign was ever received. And so it is that the sign of the covenant, rather than ascribing special status or favor in the sight of God, points to our need to be cleansed from the filth of the flesh (I Pet. 3:21), which righteousness comes only through faith in the promised Seed. Such then are God’s covenant children, not those who receive the sign according to law, but those who follow in the faith of Abraham and seek their righteousness in the same promised seed as Abraham did, that is to say, in Christ (John 8:56). These that follow in faith, not the children of the flesh, are the children of Abraham, and heirs of the covenant of grace (Rom. 4:12).

For us, what it comes down to is this. When a child is baptized, that baptism implicitly involves the commitment “to see these children . . . brought up in the aforesaid doctrine.” This means that our children are to be taught the gospel, namely, the fact that righteousness and the experience of covenant fellowship with God come to one, not because he has been baptized as God requires (according to the law), but only through faith in the promised seed, Jesus Christ (Gal. 3:16). There is no other way through which one can come to be adopted as a child and receive an eternal inheritance in the covenant of God (Rom. 8:15-17).(Perhaps we should note that Paul did not come to this truth by means of a logical deduction from an abstract beginning in the doctrine of election. He comes to election – after passing through several of the most profound chapters in the Bible – but only as a means of demonstrating and supporting what he had already established from his careful exegesis of the Word of God. And the same can very really be said of the theology of Herman Hoeksema. Somehow the idea seems to have gotten about that his views can be dismissed lightly by simply identifying them as rationalistic logic, and leaving them at that. Anyone, however, who knew Rev. Hoeksema personally or has studied his works seriously, must know that he was not in the least inclined to philosophical speculation, or to beginning with an abstract presupposition, whether election or anything else, and deducting his positions syllogistically from that. Hoeksema was first and foremost an exegete of the Word of God. He believed sincerely in the unity of the Word of God, and came to his teachings by comparing Scripture with Scripture until he came to that which was in harmony with the whole. This he taught, being quite content to “just leave it there.” Election had a place that, an important one, but hardly an abstract starting point from which to deduct the rest. It was to him, as with Paul, but another indication that covenant fellowship with God comes to one, not by receiving an external sign according to law, but only as by grace through faith one is engrafted into God’s Son, in Him to become an heir.)

And so is it regarding the “covenant breakers” passages which Tuininga cites. They, and others like them, are fascinating to study, each within its own context; but I doubt whether any of them comes close to teaching what Tuininga would have them say. I suppose, considering the expression itself, it is rather natural to conclude that these passages refer to “those who were in the covenant but because they did not live up to the demands of the covenant were cut off.” But take, for example, the first and foremost of them, Genesis 17:14: “And the uncircumcised man child whose flesh of his foreskin is not circumcised, that soul shall be cut off from his people; 59 hath broken my covenant.” The covenant breaker here is not one who has received the sign of the covenant, only thereafter to lose what he had for failing to meet its conditions. Rather, he is the one who has not received that sign at all, or in the terms of Romans 4 – has not been brought up under the truth that righteousness comes only through faith in Christ. And when he does not know that, and accordingly does not baptize his children and teach them that truth, the line of covenant generations are no longer carried on in that fatly; it is broken off from the vine. What had been a line of generations in the covenant of God is stopped, and, unless God intervenes, will no longer carry on the truth of the gospel to its future generations. The covenant is broken when it is not carried on from one generation to the next. 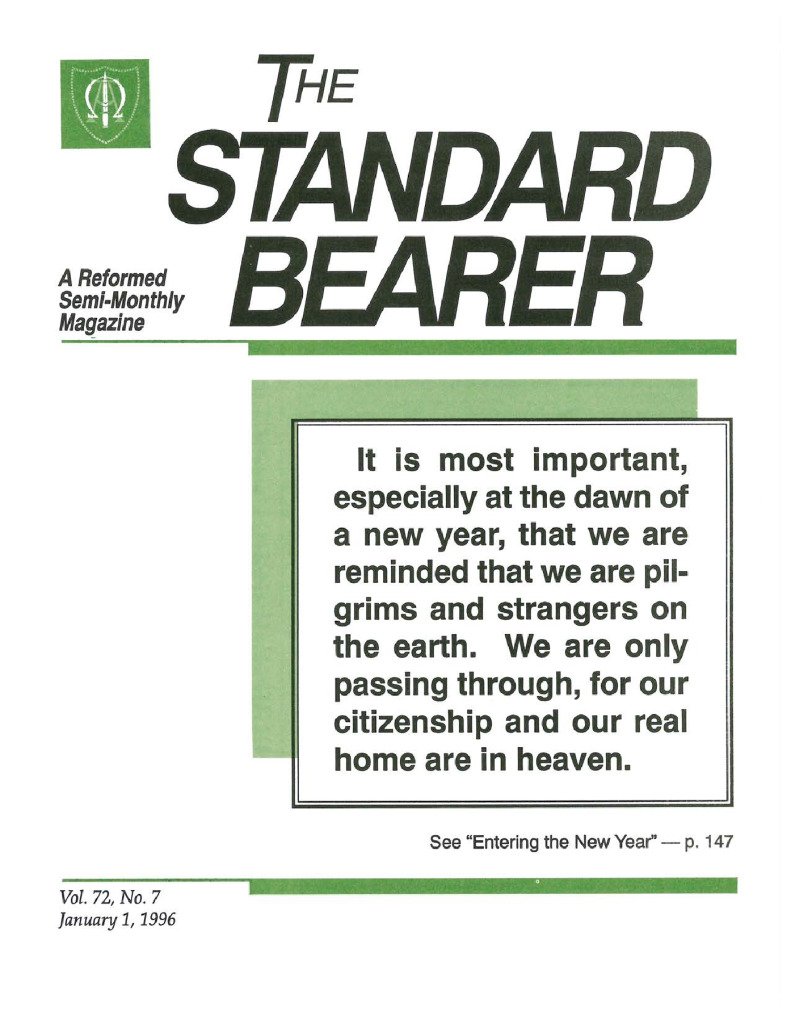