A Question About “Believers And Their Seed”

From a reader in Wyoming, Mich. comes the following question:

“I am confused by the article “Believers And Their Seed” by Rev. Herman Hoeksema in the Aug. 1, 1970 article of the Standard Bearer.

“First he writes, ‘God’s covenant is the living and eternal relation of friendship between Him and His elect people in Christ Jesus.’ Wonderful:—that is the best definition of God’s covenant I have ever heard. Then he goes on and makes the statement, ‘If only the elect are saved, why are those reprobate temporarily in God’s covenant on earth?’ I didn’t think that B reprobate was ever in God’s covenant. If the elect of God was predestined before the foundation of the world, isn’t the same true of the reprobate? Doesn’t God always finish what He starts in every life?

“The editor does say that a person can come into the ‘sphere’ of the covenant. I think by this he means he can be baptized in a Christian church, by godly parents, and yet never be born again. That is surely true; and I hope you will not think I am writing this in a critical attitude; but this was puzzling to me, and I would like to have this explained.”

My questioner not only reads The Standard Bearer, but reads with careful discernment. I recall that when I was preparing the translation of this section of “Believers And Their Seed,” I thought that the particular statement to which this letter refers might give rise to some misunderstanding because of that word “in.”

However, my questioner is also on the right track as far as the solution of this little problem is concerned. The point of Chapter X of “Believers And Their Seed” is that the reprobate are not essentially in God’s covenant, but that some of them are “in the sphere of” or are “under” the covenant. In other words, the expression in question refers to the historical position and relation to the covenant of those reprobate. As you read in the same paragraph, “They are not to be placed on a par with the heathen, with those who never come into contact with God’s covenant.” And this chapter deals with the question, “What is the significance of God’s covenant for the ungodly and reprobate who historically are born in that covenant and who temporarily, or even all their lifetime, live under that covenant?” The emphasis, therefore, lies on the fact that historically, as far as the manifestation of that covenant on earth is concerned, they are under, or in the sphere of, that covenant.

As becomes plain in the rest of the chapter, such reprobate have all things in common with the elect in that sphere of the covenant, except grace.

Questions About I Corinthians 3:12-15

From a Grand Rapids reader comes a whole series of questions in the following letter: “Dear Prof. Hoeksema,

Could you please explain I Cor. 3:12-16? We have a problem with the apparent undue emphasis on the work of man apart from Christ; the meaning of the building materials; and, what the fire stands for. Also what specific reward does the man who builds with the gold, silver, or precious stones receive, and what loss does the other man suffer?”

First of all, rather than to quote the passage in its context, I will ask the reader to refer to his Bible. The apostle in the context is dealing with the problem of the divisions in the church of Corinth, according to which one said, “I am of Paul,” and another, “I am of Apollos,” etc. And in this connection he writes about the workmen who labor in the building of the church, and about their labors and the manner and quality of their labors.

This brings me to the first part of my correspondent’s problem, “the apparent undue emphasis on the work of man apart from Christ.” In the first place, I would point out that there is no such emphasis; but, on the contrary, the context emphasizes the very opposite. Thus, in vss. 5-7: “Who then is Paul, and who is Apollos, but ministers by whom ye believed, even as the Lord gave to every man? I have planted, Apollos watered; but God gave the increase. So then neither is he that planteth any thing, neither he that watereth; but God that giveth the increase.” (emphasis added) You find the same emphasis in vs. 9, especially when it is correctly translated, “For we are laborers together of (not: with) God: ye are God’s husbandry, ye are God’s building.” And again, in vs. 10 the apostle emphasizes that his labor is by grace: “According to the grace of God which is given unto me, as a wise master builder, I have laid the foundation (specifically referring to the building of the church of Corinth, HCH), and another buildeth thereon.” (emphasis added) Hence, the emphasis is exactly on the fact that no one can be a builder and no one can work at the work of building, except by the grace of God in Christ Jesus.

In the second place, in this context and setting the apostle emphasizes the high and holy calling and task of the laborers, “But let every man take heed how he buildeth thereupon” (that is: upon the foundation), vs. 10. It ought to be noticed, too, that the emphasis is upon the manner, the how, of that labor of the ministers of the Word. They must in their labors—preaching and expounding of the Scriptures, instruction and admonition—always take care not only that they build upon the only foundation, Jesus Christ, (vs. 11); but they must always labor in such a manner that their labor is in harmony with the precious character of that foundation (Jesus Christ is the elect, precious cornerstone!). They must not be slovenly in their labor. They must not do half-work. The workman must, as much as in him lies, expound the riches of the truth as it is in Jesus.

It is from this point of view, in the third place, that the apostle compares a man’s building upon that foundation with the building of gold, silver, precious stones, on the one hand, or wood, hay, stubble, on the other hand. These building materials are not figures of the members which are built upon the foundation. They are rather figures of the quality of the labors of the workmen. Let us say his preaching, his sermons, his catechism lessons, to be concrete. You will notice that in the main there are two classes of building materials mentioned: the precious, or valuable, and the less valuable, or even worthless.

In the fourth place, there is in this passage the idea that the workman and his works shall appear in judgment in the day of the Lord’s final appearance and coming. And while the reward is altogether of grace, that reward shall be given according to each man’s work, vs. 8: “and every man shall receive his own reward according to his own labour.” The “day” in vs. 13 is the “day of the Lord,” in which Christ shall appear as judge and in which every man’s work shall be made manifest in its true worth. The “fire” is not the fire of hell (much less, of purgatory). It is rather the fire of the burning holiness of Christ. This is an idea which occurs more often in Scripture. In II Thess. 1:8, Christ is said to be revealed in “flaming fire.” And in Rev. 1, in the vision of the glorified Christ in the midst of the candlesticks, He has eyes “as a flame of fire; arid his feet like unto fine brass, as if they burned in a furnace.” Every man’s work, therefore, shall be exposed in the light of His burning holiness as to its true worth. It shall be put to the fire-test; and only that which measures up to the preciousness of that foundation shall survive the test and shall abide, vss. 13, 14. Those whose building is comparable to the building of gold, silver, precious stones (which can survive the purging effect of the fire-test) will experience that their works follow them into the everlasting kingdom of Christ; and they receive their reward accordingly, a reward of grace andaccording to works. Those whose building is comparable to the building of wood, hay, stubble, will experience that their works cannot survive that test of the burning holiness of Christ. They suffer loss, i.e., the loss of those works. Yet they themselves shall be saved, which evidently points to the fact that they personally were children of God, while their works are burned. Hence, they are saved “as through fire.” Notice it does not say they are saved “by fire,” but “asthrough fire.” There is the figure here, as it were, of a man in a burning house. All around him that house is burned down, but he escapes and is saved right through the fire.

Along these lines I believe this passage must be explained. 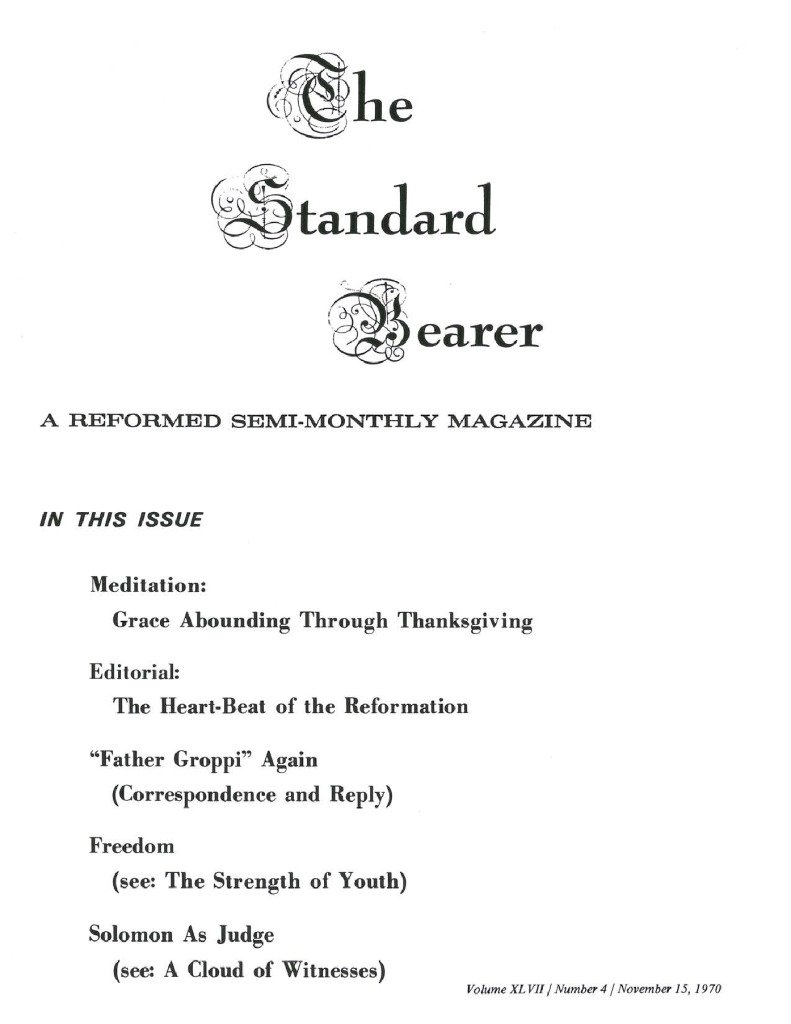