Mr. Doezema is secretary of the Domestic Mission Committee.

Our domestic home missionaries make reports to their respective calling churches and the Domestic Mission Committee on a regular—at least bimonthly—basis. In those reports they keep the two bodies abreast of developments as they occur. In addition to the bimonthly reports, each of the three missionaries also submits an annual report, which is included in the agenda for synod and constitutes an important part of the information provided that assembly to give it a sense of what’s actually happening in the various fields of labor. Those annual reports, however, are more than simple overviews of the year’s labors. They are, as it were, little windows into the hearts of the missionaries, revealing what is their modus operandi and what is their perspective of the work. For this short report from the DMC for the SB, let’s take a look into those windows.

Rev. Hanko reflects on the fact that he and his family have been in Northern Ireland for seven years. What have they been doing? “Putting down roots,” he says. He doesn’t elaborate at all. He doesn’t pause to explain what he means by that. Just a single sentence: “In many ways the past seven years we have been putting down roots both as a family ….”

A little window it is. Did Rev. Hanko take the call to work in the British Isles with the idea that he was willing to serve as missionary for awhile? … that he was willing to take his family to a foreign country for a few years and then come back “home”? … that he would, during that time, make the best possible use of the British educational system so that his children would be up to speed when they returned to their own schools in the States? Was Northern Ireland just a stopping point in a career in the ministry?

No, they’ve put down roots. The family has a “furlough” every two years. They enjoy visiting with family and friends. After those few weeks, however, they’re ready to go back home. Home now is 7 Lislunnan Road. It’s Ballymena. It’s Northern Ireland. It’s the United Kingdom. Not simply because that’s where their stuff is. But because that’s where their “life” is. The British educational system is theirs. The children work hard in school, not to be able eventually to fit into the American system, but to progress to the next stage in the British. Their church home is the CPRC.

That’s from the more personal side. We have still to finish Rev. Hanko’s sentence. The putting down of roots applies, he says, “both as a family and as far as the work is concerned.” How has he been putting down roots with respect to his work in Northern Ireland? Again, he does not elaborate. But let us consider what has gone before.

When, nearly four years ago, the Covenant Reformed Fellowship was organized and the Covenant Protestant Reformed Church in Northern Ireland became a reality, an important objective of Rev. Hanko’s work was reached. But not the goal of it. The work, under the blessing of God, went on. And now, four years later, Rev. Hanko can testify that: there is modest but steady growth of the congregation in terms of numbers; there is significant development in the leadership abilities of officebearers; all the young people in the congregation who were able to make confession of faith have done so; and a son of the church is not far from graduation from the Theological School of the Protestant Reformed Churches.

And that isn’t all. Rev. Hanko has never forgotten his broader assignment, the British Isles. Pamphlet distribution; regular newspaper articles; a large mailing list; numerous speaking and preaching engagements not only in various places in Northern Ireland but in Scotland, England, and especially Wales—all of these have continued unabated since the time of organization. And now, four years later, Rev. Hanko can testify without fear of contradiction that this little congregation of some 50 souls is “known and recognized throughout Northern Ireland and the rest of the U.K.”

So … is the work for which he was sent to Northern Ireland finished? No. The roots are down. That’s all. The foundation is laid. Now is the time to build. “It is difficult now,” Rev. Hanko writes, “to imagine leaving the work at this stage. It would seem, humanly speaking, that we would be leaving much unfinished.”

What is Rev. Hanko’s vision for the future? Continued growth of the CPRC in Northern Ireland first of all. And the starting of other congregations there, the Lord willing. Not, however, to the neglect of work which beckons elsewhere in the UK—especially in South Wales, where our missionary sees good hope for the eventual establishing of a church.

Work enough, that is, for two men. But, as our missionary sees it, not quite yet. More preparatory work should be done in South Wales to solidify a core group which can form another base for the full-time labors of a second man. Rev. Hanko, as our missionary in the UK, plans himself to go there periodically; and, with synod’s continued approval, perhaps other of our ministers, active or retired, might be able to go for more extended periods of time, to bring the kind of regular preaching and teaching which Rev. Hanko is not able at this time to provide.

But next year, things may be different. The availability, D.V., of Seminarian Angus Stewart for the work in or by the CPRC after graduation in 2001 could very well change the complexion of the work in the UK, to the point where Rev. Hanko is able to be more active in mission work elsewhere in the United Kingdom. “We hope, anyway,” says Rev. Hanko, “that this will be the case.”

Such is the vision of our missionary in Northern Ireland. In reflecting on the past, he testifies that the blessing of God on his labors and the labors of the CPRC has been “spectacularly evident.” Roots have been put down. Foundations have been laid. Now is the time to begin to build on it. He and they look forward eagerly to what they consider to be the great privilege of bringing God’s truth to those who, in a spiritual wasteland, “appreciate it so very much that it sometimes shames those of us who have always had it and are inclined to take it for granted.”

The long-term commitment and zeal which is so clearly evident in the report and the work of our missionary in Northern Ireland characterizes also the labors of our eastern and western home missionaries. They, too, can be said to be putting down roots in their respective areas of labor. But, with regard to the specific field of labor which was his in the western US, Rev. Miersma has been recently uprooted. His work in the SanLuis Valley came to an end in April of 1999. Not easily does a missionary leave a field of labor. Not easily did Rev. Miersma bid farewell to the saints among whom he had labored for some four years in Alamosa, Colorado. That’s clear from his annual report, as it was also from his bimonthly reports. But equally clear was his conviction that his move from Alamosa to Spokane, Washington was the right thing, and was the Lord’s purpose, for him and for those with whom he had to do.

The work in Spokane is unusual in that it involves a church, an organized congregation, with officebearers in place. Hardly does that mean, however, that Rev. Miersma is not now engaged in the work of missions, that he serves now more as pastor of the Sovereign Grace Reformed Church than as missionary of the Protestant Reformed Churches. Consider that the sincere desire of the congregation is that they be brought into the PRC. There’s work to be done before that can become a reality. Though the SGRC is wholeheartedly committed to the doctrines of grace as they are taught in the PRC, there are elements of their practice which remain still to be brought more in harmony with our churches. And, too, the congregation is small—about half the size of the little congregation in Northern Ireland, and only a little larger than the Mission group in Pittsburgh. Clearly, therefore, the work of missions, the work of evangelism, is as necessary and as critical a part of the task of the missionary in Spokane as it was in the SanLuis Valley.

The work of Rev. Miersma in Spokane has really just begun. His focus, he writes, has been “first of all to establish firmly the work within the congregation.” At the same time, however, he and the consistory of the SGRC have begun more energetically to set forth a witness in the community. The results have been encouraging, to the point where our missionary can report that he is optimistic that “the Lord has given us an open door to preach the gospel in this area.”

The spiritual vitality of the congregations in Northern Ireland and Spokane has been a source of great encouragement both to the missionaries in those places and to the DMC. The same can be said concerning our eastern home missions. Rev. Mahtani reports that there is in the group in Pittsburgh a “vibrant zeal to make known the newfound pearl of the gospel to others.” Our eastern home missionary is himself a convert from paganism; so he knows personally the special preciousness of such a “newfound pearl.” And he delights in seeing it in others as they come to a knowledge of the Reformed faith—many, in the Pittsburgh Mission, out of Roman Catholicism.

The “vibrant zeal” shows itself in many ways and places. There is the love for the preaching and teaching. There is the energetic involvement in mission activities, including mass mailings, manning the mission booth at a Christian festival, and, most importantly, personal witnessing. The most recent addition of a family to the group apparently came as a result of a one-minute radio broadcast. But almost all visitors have come at the personal invitation of existing members who talk to others about the hope that is in them.

And what is true of the Mission in Pittsburgh seems also to be true of a small group in Fayetteville, North Carolina. Several families there have for two years been worshiping together using video tapes of services in various of our Protestant Reformed Churches. This group’s vibrant zeal for the truth is an inspiration even to our missionary, who has begun going to Fayetteville on a bimonthly basis. Their use of Protestant Reformed literature (books, pamphlets, SB articles) in personal witnessing is nothing short of incredible. The Mission Committee, after recently sending a delegation to Fayetteville to assess the situation there, has decided to try to arrange for various of our ministers to go to Fayetteville on some kind of a regular basis in order to preach, teach, and follow up on contacts made. What will come of this we cannot say, of course, but we do agree with Rev. Mahtani that such a call for help requires our serious attention.

Pittsburgh. Fayetteville. And that’s not all, in the east. Rev. Mahtani has contacts in New York, Washington, DC, and elsewhere. “I am convinced,” he says, “that we will need more home missionaries to do the work.” We do not doubt that that is true. In fact, we thank the Lord that it is. May we conclude our short article on our missionaries’ perspectives with this from our eastern home missionary: “In the meantime let us pray the Lord of the harvest, that He may give us laborers for His harvest. Remember to pray for your missionaries. The labors are exciting, but also filled with trials and discouragements. Like farmers who plant the seed, so we missionaries must patiently labor, knowing God will give the fruit, in His time, according to His own purpose.” 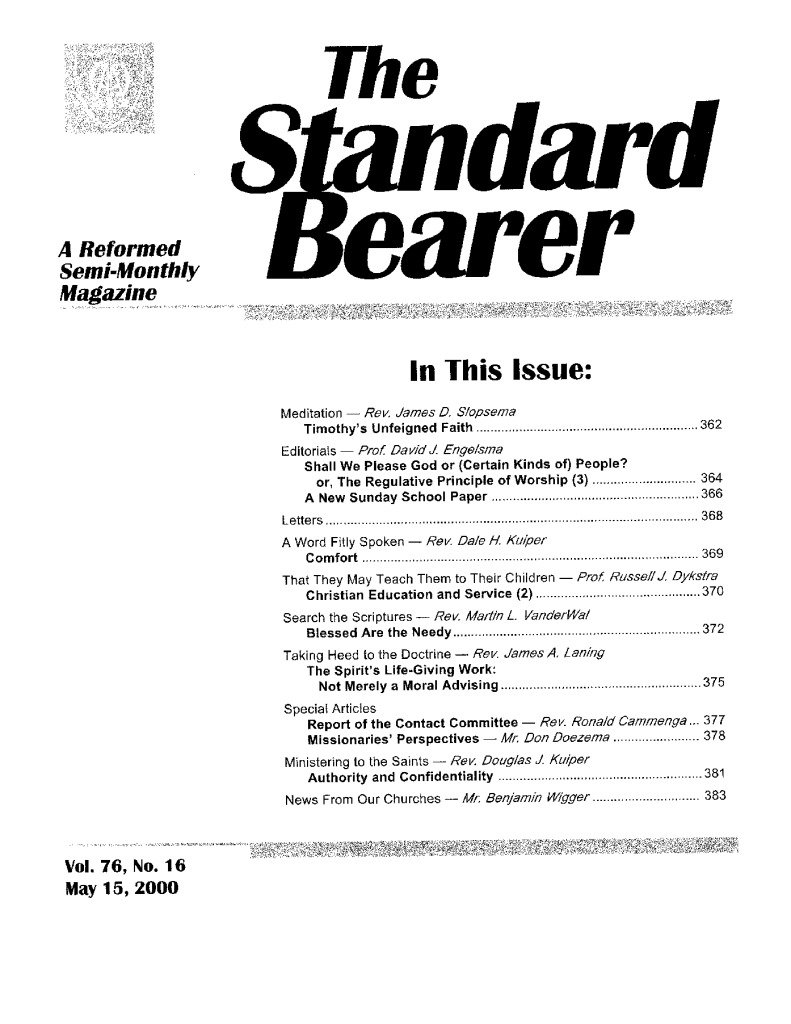