On October 31 we commemorated the Reformation of the church which began some 480 years ago. Today we witness continued and increasing attacks against the truths maintained in that Reformation. We have been reading of the signed agreement between the Roman Catholic Church and much of Lutheranism in which these now express agreement on a definition of “justification.” The agreement is in fact capitulation on the part of these Lutherans.

But the attack against the principles of the Reformation is made on other fronts as well. The Grand Rapids Press, November 6, 1999, presents an interview with Bishop John Shelby Spong of the Episcopal Church. This man has caused consternation within the Episcopal Church as a result of earlier books he has written. Added consternation arose as a result of his most recent book, “Why Christianity Must Change or Die.”

The Episcopal Church appears to do nothing about his heretical views. There are some, indeed, who urge him to leave the church. He himself said, “I had one minister in Alabama call me a whore. He was saying I’m denying everything the church has always taught and I’m still earning my living from the church.” “I would have abandoned the church a long time ago if I hadn’t loved it,” he insisted.

But what does this man who claims to “love the church” wish to change? In the Press interview we have the following:

Only by refashioning traditional Christian doctrines to fit modern understandings can the church survive in the next millennium, said Spong, who was invited by Christ Community Church to lead a weekend seminar.

The concepts he says the church must abandon would stun many Christians:

God as a separate, supernatural being who intervenes in human affairs;

Jesus as an incarnation of a supernatural God;

The virgin birth and physical resurrection of Jesus;

A heaven and hell that reward or punish our behavior.

Instead, Spong presents God as the mystical source of life and love, or “Ground of Being,” whose spirit dwells in each person and who was revealed in Jesus. He calls on post-modern Christians to live fully and love “wastefully,” sharing God’s gifts with others regardless of race, religion, gender or sexual orientation.

“I don’t want to get rid of the Bible or creeds,” said Spong, 68, who will retire in February after 24 years as bishop of Newark. “I simply want to carry the Christ experience into the 21st century and find language appropriate in the 21st century to capture the power and truth that’s in that figure.”

A kind of manifesto of Spong’s previous writings, the book bills itself as “a new reformation of the church’s faith and practice.” Spong even posted, Luther-style, 12 theses from the book on the Internet. In so doing he confirmed his status as one of America’s most visible — some say media-savvy — religious rebels.

Spong doesn’t apologize for invoking the image of Luther’s 95 theses nailed to a church door in pushing for a new vision of Christianity.

“It really is an attempt to wake the church up to the fact that at least the mainline churches are dying,” Spong said in his soft Virginia drawl.

Churches are dying because legions of people no longer can believe in the literal truth of ancient Christian creeds and concepts, Spong argues. He calls these people “believers in exile.” While many are rushing to biblical fundamentalism, others are rushing out of religion altogether, he says.

Science, Spong contends, has rendered meaningless such ideas as Jesus’ ascent into heaven and the virgin birth. The miracle stories of the Bible don’t hold up in “a post-Newtonian world.” He calls the notion of the crucifixion as a sacrifice for the world’s sins “a barbaric idea based on primitive concepts of God.”

One wonders what this man means when he claims that he does not “want to get rid of the Bible or the creeds.” If the views he presents were correct, one had best throw away the Bible and the creeds. One wonders what he means when he claims to “love the church.” If this is his “love of the church,” there is no need for any to “hate” that church. Spong’s ideas would surely serve to destroy the church—except for the fact that Christ has promised to be with that church to the end of the world.

Spong is correct, of course, in his claim that many are leaving the church. He is correct that churches are dying. His proposal for renewal, however, would surely hasten this process. It is exactly the renewal of the church that requires a return to Holy Scripture. Renewal requires a return to the confession of the cross and the atonement through that cross. What Spong proposes to eradicate is, however, the only thing which will hold the church together. Why would Spong, or anyone else, want to belong to a church where the very reason for its existence is destroyed?

Is the Bible True?

It is not strange, I suppose, that within the secular press there has been increasing attention paid to Scripture. It is Scripture which speaks of the end of the age. Now, as the millennium draws near, even within secular society there is a certain perverse interest in the Bible. There is, of course, the first question generally asked: Is the Bible true? The second question immediately follows: What does it say about the “return of Christ?”

That first question was treated recently in U.S. News and World Report, October 25, 1999. The report indicated that a number of recent archeological findings in the area of Canaan substantiate what the Bible says. The article begins by pointing out that archeologists have now proved that David was a historical person:

The workday was nearly over for the team of archaeologists excavating the ruins of the ancient Israelite city of Dan in upper Galilee. Led by Avraham Biran of Hebrew Union College in Jerusalem, the group had been toiling since early morning, sifting debris in a stone-paved plaza outside what had been the city’s main gate.

Now the fierce afternoon sun was turning the stoneworks into a reflective oven. Gila Cook, the team’s surveyor, was about to take a break when something caught her eye—an unusual shadow in a portion of recently exposed wall along the east side of the plaza. Moving closer, she discovered a flattened basalt stone protruding from the ground with what appeared to be Aramaic letters etched into its smooth surface. She called Biran over for a look. As the veteran archaeologist knelt to examine the stone, his eyes widened. “Oh, my …!” he exclaimed. “We have an inscription!”

In an instant, Biran knew that they had stumbled upon a rare treasure. The basalt stone was quickly identified as part of a shattered monument, or stele, from the ninth century BC, apparently commemorating a military victory of the king of Damascus over two ancient enemies. One foe the fragment identified as the “king of Israel.” The other was “the House of David.”

The reference to David was a historical bombshell. Never before had the familiar name of Judah’s ancient warrior king, a central figure of the Hebrew Bible and, according to Christian Scripture, an ancestor of Jesus, been found in the records of antiquity outside the pages of the Bible. Skeptics had long seized upon the fact to argue that David was a mere legend, invented by Hebrew scribes during or shortly after Israel’s Babylonian exile, roughly 500 years before the birth of Christ. Now, at last, there was material evidence: an inscription written not by Hebrew scribes but by an enemy of the Israelites little more than a century after David’s presumptive lifetime. It seemed to be a clear corroboration of the existence of King David’s dynasty and, by implication, of David himself.

The article continues by pointing out other events both in the Old Testament and in the New which appear now to be corroborated by discoveries of archeologists. There are those who would still question the historicity of the Patriarchs as well as the flight of Israel from Egypt. Even then, others seem to argue convincingly, on the basis of known events of that period, that the Bible presents accurate history.

Other discoveries seem to prove to the secular mind the reality of Jesus and of the crucifixion. There is evidence in archeological discoveries that there was a “Pilate” in the land of Judah in Jesus’ day.

Two events recorded in Scripture, however, simply cannot be proven from man’s study of archeology. There is the creation in six literal days and there is the account of a universal flood. Both are dismissed because these accounts can never be harmonized with science, so it is said. The article refers to Augustine, who is supposed to have questioned the literal account of Genesis 1-3. Also, Howard Van Till of Calvin College is quoted. “Creation and evolution are not contradictory,” explains Howard Van Till, a professor of physics and astronomy at evangelical Calvin College in Grand Rapids, Mich. “They provide different answers to a different set of questions.” At least on the matters of creation and universal flood, the rational mind concludes that the Bible cannot be true.

Modern archaeology may not have removed all doubt about the historical accuracy of the Bible. But thanks to archaeology, the Bible “no longer appears as an absolutely isolated monument of the past, as a phenomenon without relation to its environment,” as the great American archaeologist William Albright wrote at mid-century. Instead, it has been firmly fixed in a context of knowable history, linked to the present by footprints across the archaeological record.

Just as archaeology has shed new light on the Bible, the Bible in turn has often proved a useful tool for archaeologists. Yigael Yadin, the Israeli archaeologist who excavated at Hazor in the 1950s, relied heavily on its guidance in finding the great gate of Solomon at the famous upper Galilee site: “We went about discovering [the gate] with Bible in one hand and spade in the other.” And Trude Dothan notes that “without the Bible, we wouldn’t even have known there were Philistines.”

It is interesting to read accounts which show that events recorded in the Bible have actually occurred—as proven by science. Yet, there is something frightening about all of this. Man will believe that part of the Bible which can be confirmed through archeological or scientific studies. The rest is rejected—until perhaps science can likewise confirm it to be true. This can only mean that the heart of Scripture will never be believed—because it cannot be proved according to the science of man. The creation and flood accounts are dismissed out-of-hand. Though the death of Christ on the cross might be recognized as a historical fact, no science could ever confirm that He arose from the dead and ascended into heaven. No earthly science could confirm the reality of atonement and of the work of the Holy Spirit in the heart.

What natural man rejects, the Christian continues to confess, “By faith we believe that the worlds were framed by the Word of God….” Without such faith, it matters not how much of the Bible one might hold for truth. With faith, one holds to all of the testimony of Scripture, without claiming a need for any confirming testimony from unbelievers. 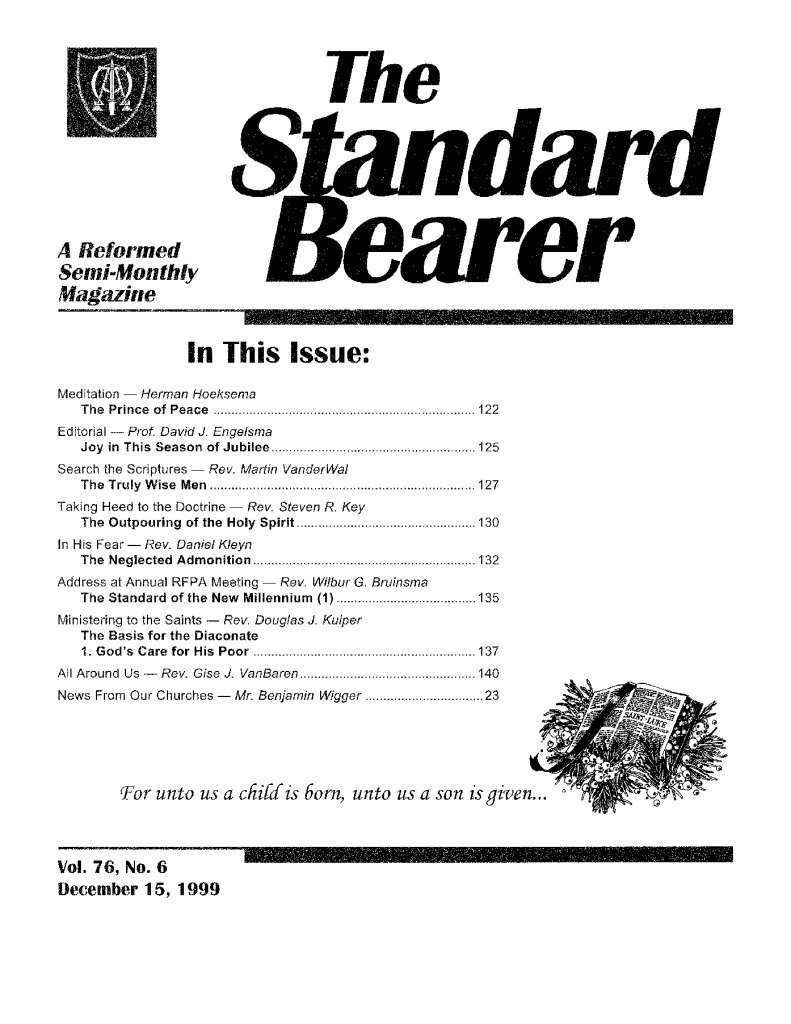