With the permission of our Editor-in-chief, the undersigned has been instructed by our Convention to give a report in our Standard Bearer, concerning the latest activities and undertakings of our youth as they are organized into various Societies. We sincerely thank our Editor for this allotted space.

Our first National Convention of Young People’s Societies was held August 2 and 3, in the auditorium of our South Holland Church. A year ago the desire was expressed by members of the South Holland Society to unite more closely the young people’s societies, and immediately a committee was appointed to study the matter and work out a program for action. The fruit of this preliminary work was our convention and the recent organization of a National Federation on a permanent basis. This result was very gratifying, and we may at the outset of this report say that the convention was a fine success from every point of view, and the Lord was surely with us.

After having come from far and near, 114 young people were registered although only four delegates from each Society were officially designated to be present. Pella, Oak Lawn, Fuller Ave. Young Men’s Society, Talitha (also of Fuller Ave.), Hudsonville, Holland, Hope, and South Holland were officially represented, and Oskaloosa, Creston, and Kalamazoo had unofficial representatives, however the latter were given advisory votes.

The first session was of an introductory nature; for the main point of business was an address given by Rev. G. Lubbers. This session took place on the evening of August 2, under the chairmanship of Rev. L. Vermeer. A fifteen minute Psalter song service, guided by both organ and piano, opened the meeting. After prayer and scripture reading, the speaker addressed us for nearly one hour on the subject, “The Days of Our Youth.” This theme he divided into three main parts, namely, the period of youthful activity, the period of youthful preparation, and the period of youthful guidance. (This address, to which the public was invited, we deem worthwhile to be published in our Standard Bearer). The speaker stressed the fact that youth is characterized by activity, and the ‘do-something’ spirit. Always youth, whether wicked or godly, is intensely active, and this activity prepares him for life. Life, not in the narrow sense of the word, but life in all its spheres, as that life gradually unfolds itself when youth grows up into man- or womanhood. Because this youthful activity cannot be stifled or checked, it prepares us for all of life; therefore youth must be guided into the proper channels. A fitting example used by the speaker was that of a stream or river. If we attempt to dam the stream, the results will be to send the water into all directions, overflowing its banks completely, and thus running turbulent. Therefore, instead of damming the stream, it must be led into proper channels. Thus also the activity of our youth must be directed in the way of God’s Covenant. Truly this was an edifying, instructive, and fitting address for our young people, as well as for the others present. Except for a short meeting after the speech, at which time badges were presented to the delegates and visitors, the meeting was closed by Rev. C. Hanko.

The following day, meetings were held from 9:45 A.M. to 5:00 P.M., with an hour and a half lunch intermission. Rev. L. Vermeer was President, pro tern, until the voting of an executive board. Members elected were: President—Homer Kuiper; Vice-Pres.—Peternella Poortinga; Secretary—Alice A. Van Baren; and Treasurer—James Kuiper. Also a committee was voted to draw up a constitution and submit it to the next convention. This committee consisted of Margaret Schippers, Harriet Doezema, Betty Van Dellen, and Homer Kuiper. The following temporary resolutions were passed on to this committee: (a) The basis of this convention is the Word of God as expressed in the Three Forms of Unity; (b) The purpose of this convention is to unite all Protestant Reformed Young People’s Societies to work in close unity and in this manner secure a sense of solidarity in order to seek the mutual edification and development of talents as becomes Christian young people; (c) Our endeavor is to maintain with united front our specific Protestant Reformed character. Proposals of both South Holland and Fuller Ave., Societies to establish a permanent organization were enthusiastically passed. It was decided to ask the various societies for suggestions, to be submitted to the committee in re the constitution, as to a name for this new Federation. Also the invitation of the Fuller Ave., Societies to hold our next convention in Grand Rapids was accepted.

One of the outstanding decisions was the proposal for a paper of our own in which a uniform Bible study system could be printed for the benefit of all member societies. After considerable discussion it was decided to ask for a space in Our Church News, in order to have a department for Federation activities. The South Holland Society was given the responsibility to work out this plan and to do this in conjunction with the newly organized Western League of Young People’s ‘ Societies and the present writer of our Young People’s Department of the Church News. The following proposals were passed on to the S. H. committee for their consideration: (a) To choose one or more editors to write a few articles in connection with our Society life; (b) To see to it that each Society in the Federation contribute to this column; (c) To send a definite system of Bible-lessons to the various Societies for their approval or ratification. This decision was surely a practical fruit of already stated purpose of our convention.

Various resolutions were passed concerning the gratitude of the convention for the work done or favors shown. Motions of thanks were passed for the moral support of the Men’s League through their reporter, Mr. A. C. Boerkoel, which was given this new venture of the young people, and also for the free publicity granted us by the Doorn Publishing Company.

Further, it was decided to appoint ministers of our churches to act as advisors at the future conventions. For the next convention the Revs. L. Vermeer and G. Lubbers were nominated by acclamation. Finally, it was decided that the secretary publish a complete report of the activities in the Standard Bearer and Our Church News. The main business session having come to a close, the afternoon meeting was adjourned. After the concept minutes were read and approved, Rev. G. Lubbers closed with thanksgiving.

We cannot, however, close this report without mentioning the grand time which was experienced by all the delegates including 114 visitors, during the evening “get-together” at the Roosevelt School parlors. Here we all enjoyed a finely prepared supper having been served by the young married ladies of our congregation at South Holland, under the able leadership of our caterer, Mrs. M. Smits. Included in this evening gathering was a program which consisted of various numbers rendered by the societies, and last, but not least, the community Psalter singing was enjoyed by all. Indeed this was a never-to-be-forgotten evening. Many acquaintances were made and a pleasant spirit prevailed which was fittingly expressed in the final song, “Blest be the Tie that Binds.”

May this convention be the forerunner of many more and may the Lord our God continue to bless our Young People’s Societies, so that we may be a rich blessing for our Protestant Reformed Churches, both now and in the future. God be with us till we meet again. 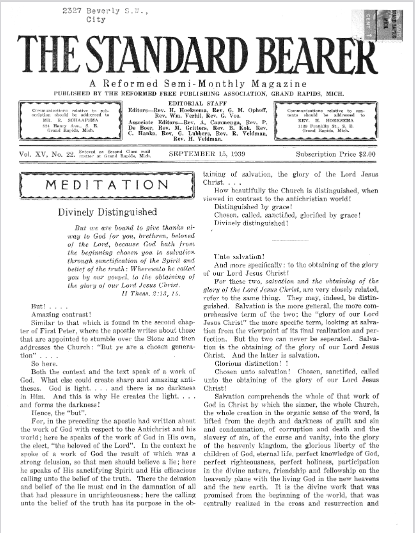